Home » Lifestyle » L. Renee’s Pro Tips to Turn Creativity Into a Career in the Outdoors

A natural curiosity mixed with a passion for climbing led this woman to carve out a niche in the outdoor industry. Here’s how.

Lanisha (L.) Renee Blount’s smile is infectious. If you’ve picked up the latest Outside Magazine, you’ve seen her 1,000-megawatt grin. Jeans, white sun shirt, a stylishly tied red bandana. Hunkered over a bouldering pad, her smile beams out of the photo.

“I don’t want people to think ‘I have arrived’,” Blount shared sheepishly. “I wouldn’t say it’s been easy!” 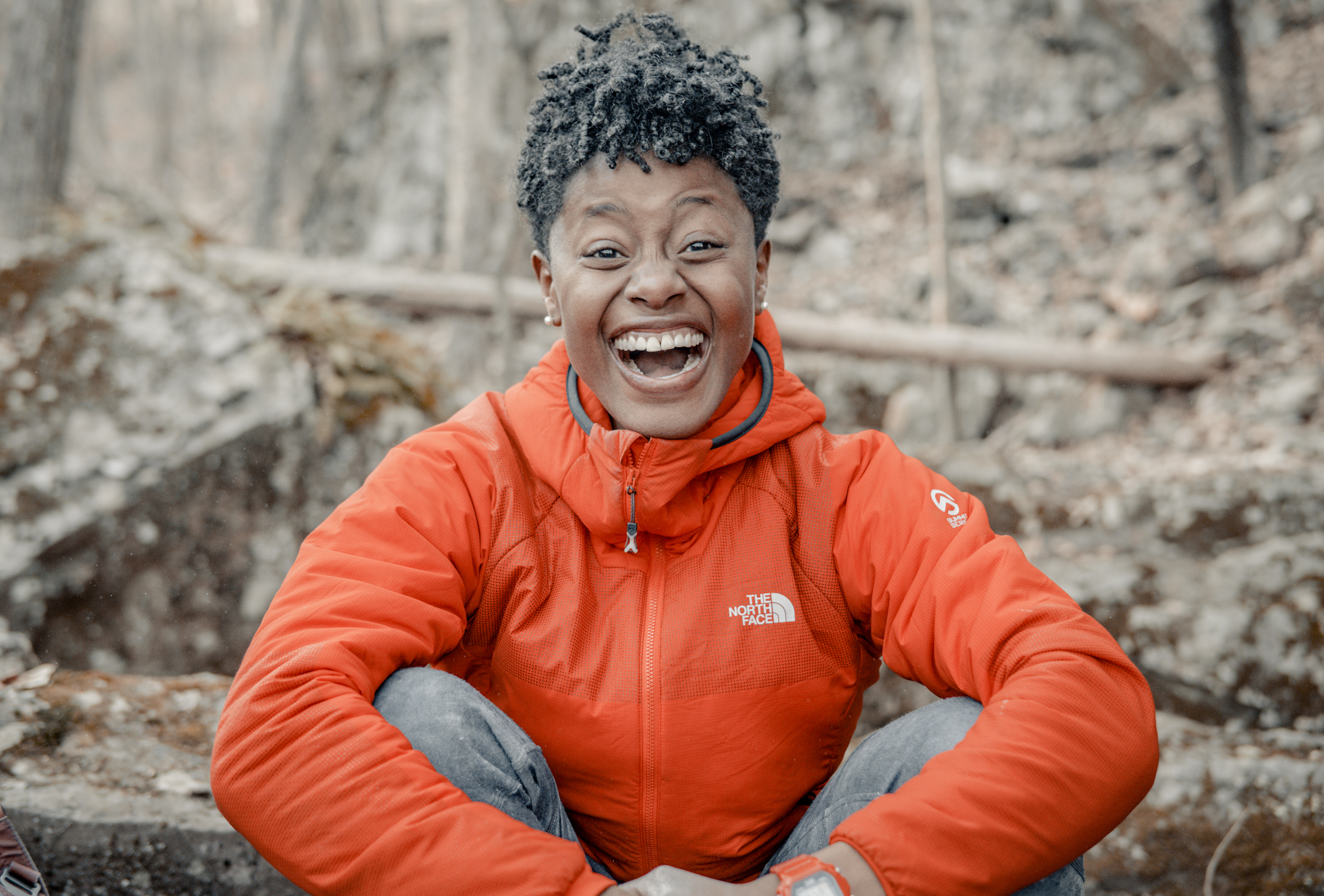 Blount has been modeling for just a few years. She’s perfectly comfortable both in front of and behind the camera. The transition happened while modeling for a photoshoot in New Hampshire.

She was injured and couldn’t climb that week. Now some might recall that as a small but tragic hiccup in a career. But for Blount, it was an opportunity to do what she always does: observe, ask questions, and learn. She picked up her camera and joined the photography crew.

“I only had prime lenses, but the head of marketing ended up using my photos instead of the paid photographer’s!”

That moment is just one of many “ah-has” that gave Blount the courage to chase her dreams. See, Blount collects experiences like the rest of us collect socks. Only she doesn’t lose them. She’s quick to sponge up the knowledge gained from each and, like some magical alchemy, turns it into a gold nugget to be cashed in the future.

Being an outdoor professional would be a dream job for many of us. But it doesn’t come easy. Follow along as we go directly to the source and learn from pros like L. Renee about their success, careers, families, and passion projects “In Real Life.”

How to Break Into the Outdoors

Blount attributes a lot of her creative success to academics. She leveraged school as a way to expose herself to new opportunities.

She said, “Almost all of my travel experiences were through volunteering and academics. The Harvard thing came about because I was already in the midst of one graduate program. People tend to couple programs together.”

Let’s pause — you read that right. Blount is a graduate of Harvard’s School of Design, where she earned a graduate degree in design after an urban planning master’s. The program whisks candidates through a series of intense architecture studios. It’s a rigorous curriculum that plumbs deep wells of creative thought, skills that Blount mastered and now employs in her burgeoning creative consulting firm today.

“I was in the right stadium but in the wrong seat,” she said. “I recognized I really love thinking about the future, adventure, and technology, so I had to find who was doing those things in an interesting and creative way.”

“The ‘H’ on the resume gets you invited the conversation, but it doesn’t give you the job,” Blount added. She recalls sitting down with some 60 coffee job chats before landing her first job as a consultant at an innovation firm. “Black candidates have to come super, super educated.”

And educated Blount is. After graduate school, Blount took not one but two fellowships. It was an unorthodox path and a bit of a gamble. While most graduates clamber for the creature comforts of a 9-to-5, the schedule afforded Blount flexibility to travel, climb, and take photos on the side. And as a strategic thinker, she used these experiences to strengthen her future network in the outdoor community.

Eventually, Blount landed a gig at a consulting firm in New York, where she helped clients reimagine solutions to existing problems.

“I have an experimental personality. I like thinking about the future and experimenting with new things,” she said. The thing is, experience has a big appetite that needs regular feeding.

Flip through Blount’s Instagram (you really should), and you can’t help but notice an overwhelming gush of joy. People are happy. People are smiling. “I mirror what I know,” laughed Blount. And if her smile reveals anything, it’s that Blount knows joy.

“It’s so important to not always show the ‘try-hard.’ There is so much imagery of that. My pictures aren’t about frozen beards. Where’s the imagery of enjoying the place?!”

In a media-rich summit culture, with brands pushing imagery of elite white athletes tackling the impossible, Blount found a unique voice. Her perspective was happy and inclusive.

In short, her point of view is refreshing: “For some people, just getting to the climb is their summit.”

Make no mistake, she still wants to show people being really badass — “but I also want to show them enjoying it!” Ultimately, she said, she wants to encourage more of her friends to get out there with her. Because, after all, “they won’t do it if it’s not fun!”

This unique perspective has turned a few heads, including those of her family and friends. Growing up, the Blount family didn’t vacation to national parks.

“It just didn’t feel safe,” Blount shared. “Many families of color don’t have a history of going to remote places that are off grid, which is very warranted and real. Why venture to a place where you will likely feel unsafe during the journey, places where you have been historically unwelcome? The outdoors are just now starting to feel safer to explore for many.”

A Black family in the white outdoors, the journey to the park was overwhelming. But they understood her curiosity and desire to try new things.

Her same joyous, inclusive point of view also caught the attention of a few big companies. In early 2018, a marketing rep from The North Face found Blount’s images on Instagram and reached out. Arc’teryx then asked if she could help put a campaign together.

Soon enough, Blount’s calendar had her crisscrossing the nation on long weekends: “I’d leave late on Thursday, fly to the location, and redeye it all the way to Monday morning.”

Along the way, she’d scout locations, model, shoot, and produce work. It was an enormous lift with a full-time job. But it was also an investment in experience, building a foundation for her next move: going it solo.

How’d she get the courage to make the jump? The academic went to her playbook, of course — research, and lots of it.

“I’d be modeling for Athleta and I’d be so curious and ask the photographer, ‘How’d you do it? How’d you get going?'” she said.

It’s pretty simple, really. She found most people have a spouse or parent to help support them through the change. “That wasn’t going to work for me,” chuckled Blount. “I had to figure out how it would work for myself.”

To tee up her transition, Blount squirreled away a freedom fund. It was just enough to float her for a few months. In early 2020, she left her steady paycheck, moved out West, and started her own firm. Blount is still consulting; she simply found her seat in that stadium, weaving her joyous style of storytelling with brands like Patagonia, Arc’teryx, and The North Face.

But she doesn’t romanticize the change: “It’s been tough! You may not get paid for 90 days. If I’m not financially careful, it’s the biggest barrier!” 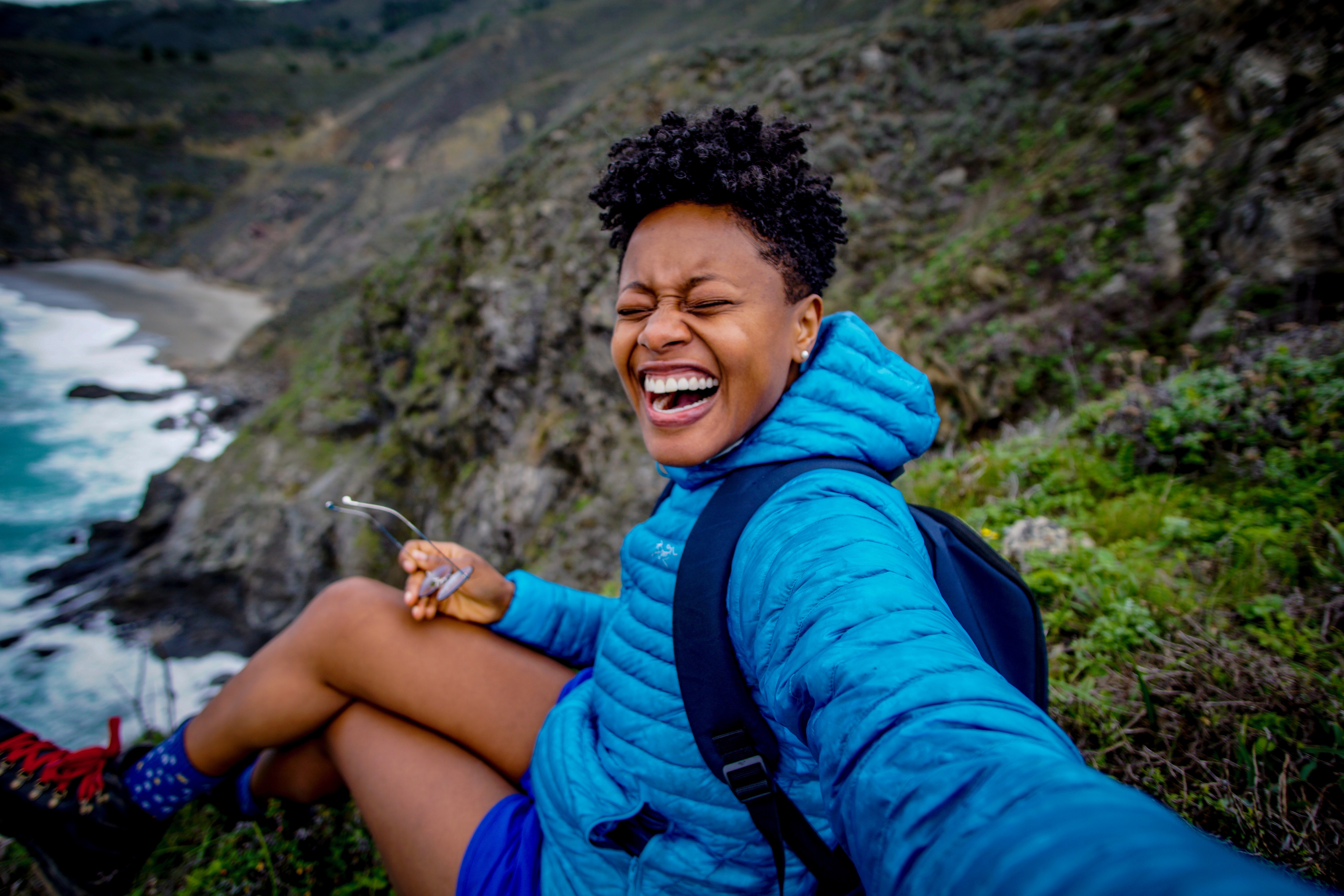 A healthy dose of conservative spending doesn’t hurt, either.

“I was like the cheapest friend. I biked everywhere so I could save money on the MTA (New York’s transit system).” Blount rented her photography gear before she bought her own. Even then, she procured equipment off Craigslist. “Resourcefulness, it’s my superpower,” she smiled.

Blount is fairly open with her friends about finances. She had to be, really. Managing shoots, production, modeling in shoots, and a newcomer to the game, she quickly understood she was undervaluing what she brought to the table as a creative. The tipping point was during a conversation with a peer where she finally understood.

“If you are doing multiple roles, you should be getting paid for multiple things. It seems silly now, it should have been a ‘duh,’ but after that, I figured out how to charge for it.”

The ugly truth is Blount has been doing this work for a while. Clients have only recently found themselves trying to define their responses to the national moment. She said, “I’d already been pitching these ideas [of inclusivity]. June made people recognize it. It’s just been illuminated.”

For better or worse, business has been good. As a consultant, she’s been given a seat at the table. For better for sure, people are listening. “Hopefully it continues to open up new things to new people.”

A consummate planner, Blount lives and dies by her calendar. In fact, we first proposed connecting on a Friday. But she told us, “Sorry, Friday’s booked.”

She was going climbing with friends.

“The hard part about working for yourself is there’s no end,” Blount said frankly. “I like to schedule three things for myself three times a week: a few staggered runs with friends or the climbing gym.”

Blount considers herself an athlete, where fitness is treated as a job requirement. Plus, much of her modeling is as a climber. “I have to be fit enough to do [the work]!” she noted. “If you don’t take care of yourself, what do you have left to give? It’s unhealthy to work too hard.” 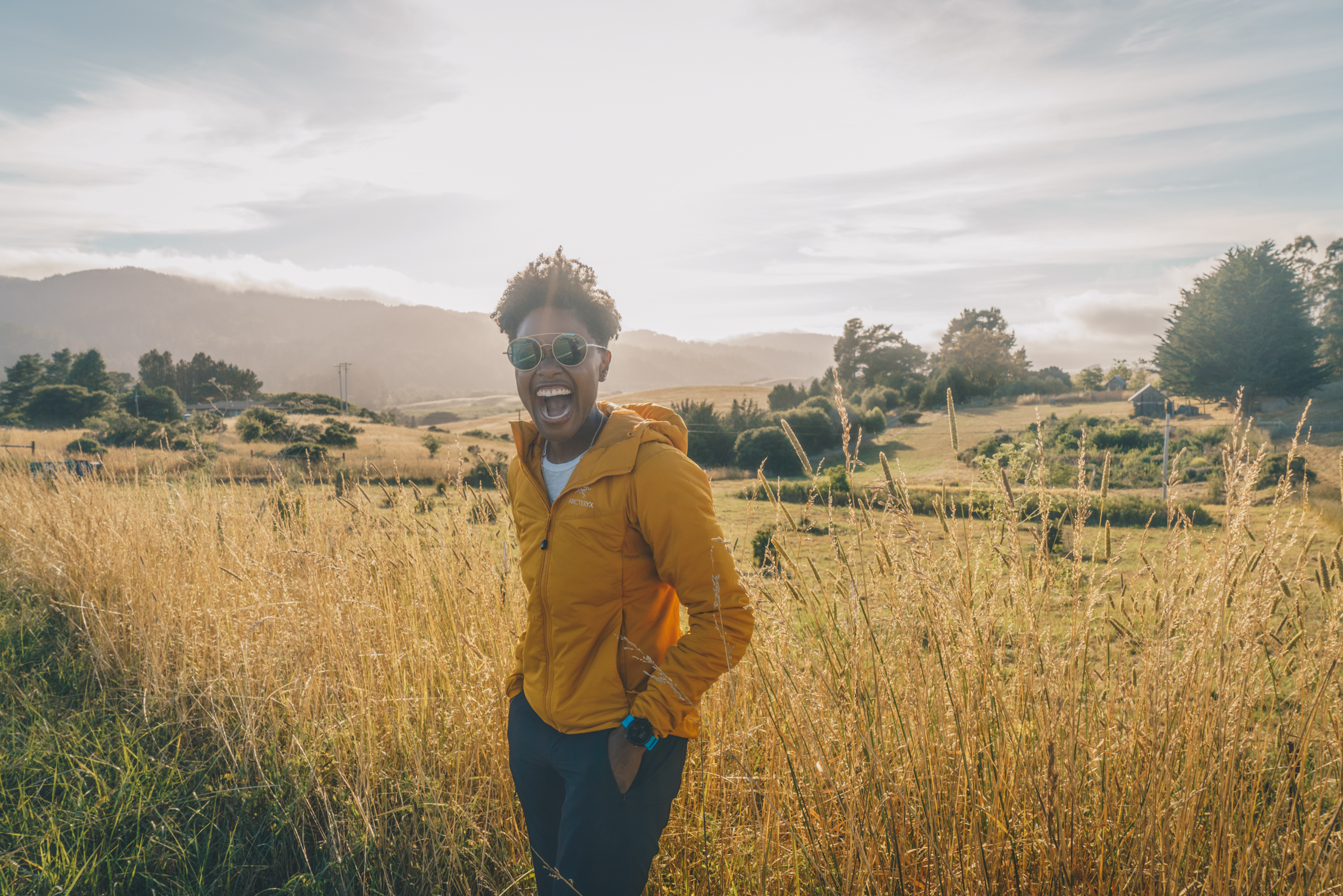 And if she’s feeling overextended? Blount advises you to be honest about what’s possible. “I want to deliver things that are great. I create boundaries about expectations.”

She uses Google Calendar, but only because that’s how clients can reserve her time. She prefers analog, an old-school paper calendar. Like a true student of user experience, her arsenal is stocked with a Moleskine notebook, Post-It notes, and micro pens.

“I’m constantly identifying ideas, what I’d like to accomplish, upcoming projects,” she said. “I can see everything on the table. I check them off to see what’s been completed. It just helps me see what I’m doing or what I’ve done.”

Blount’s strategy seems to be working just fine. In just her first year, she has worked with probably the three largest outdoor brands, been published in National Geographic, and landed on the cover of Outside Magazine.

Looking for a way to express your own creativity in the world of the outdoors? Do your research, have a backup plan, and follow your heart.

Blount advised, “If you really have a conviction in your spirit, there is something telling you you should do it — especially if you feel it over and over. What’s the worst that could happen? If I fail, I’ll have a really great story.” 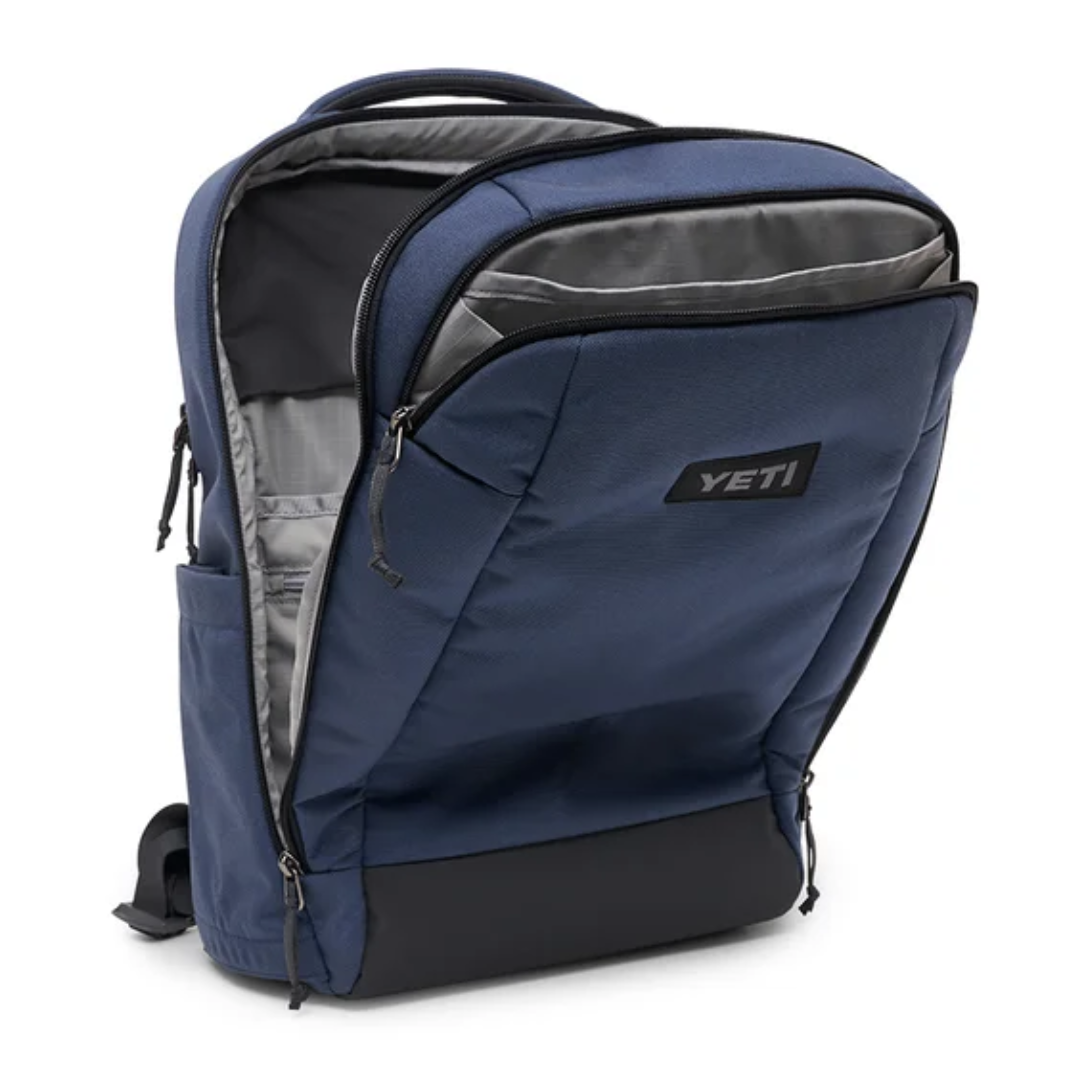 The demands of outdoor professionals call for a durable pack that can withstand long days and harsh environments. Thoughtfully designed to keep you organized and your work or play essentials easily available, the Crossroads Backpack is ready for the next adventure.

This article is sponsored by YETI as part of the brand’s ‘In Real Life’ content series.

Up Next: 5 Colorado Poachers Sentenced After Leaving Elk to Waste