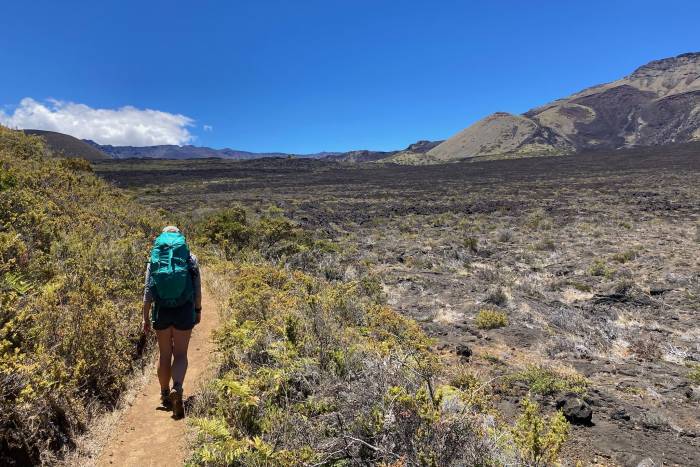 Covering approximately 75% of Maui and towering 10,023 feet high, Haleakala is one of Maui’s most sought-after destinations due to its beautiful trails.

While most visitors simply venture to the summit to catch a glimpse of the sun greeting the day, Haleakala is home to a network of trails, perfect for day hikes or backpacking. As someone who prefers to escape the crowds, I decided the best way to explore Haleakala was with a pack on my back. I hopped on a puddle hopper with a few friends from my home on Oahu — with my sights set on the volcano.

According to legend, Haleakala, aka “House of the Sun,” was the location where the demigod Maui trapped the sun, agreeing to release it only after it promised to linger longer in the sky.

According to science, the Pacific Plate drifted over a hot spot over a million years ago, and over time, the accumulation of lava produced the mountainous Haleakala. As lava hardened to create the mountain, erosion and volcanic activity worked to create canyons, eventually forming the “crater” as it is today.

Haleakala National Park was originally established in 1916 in correlation with Hawaii Volcanoes National Park. It became independent in 1961. Spanning 33,265 acres, the park is home to six of the world’s 14 climate zones.

Measuring from the base of the Pacific plate, the dormant Haleakala volcano rings in at 28,000 feet, making it 675 feet taller than Mt. Everest. Each year, 1.5 million people visit the volcano.

Where some trips take a lot of planning, Haleakala is straightforward. After planning our route, we hopped on the NPS website to book permits. There are a limited number of sites, so it’s best to book early if you can. At $8 per night, they’re a steal.

Another option is to stay in a wilderness cabin, which can also be booked through the NPS. From there, we simply had to pay a $30 entry fee into the national park, which was good for 3 days, the exact length of our trip.

In our research, we had a difficult time figuring out the water situation. After lots of searching online and a final check-in with the ranger, we confirmed that there was a water spigot at each of the campgrounds. The available water is non-potable, so plan ahead with a purifier or filter system.

To begin our journey, we parked at the visitor center at 10,000 feet and followed the Sliding Sands trail to the Palikū campground. The hike was a little over 9 miles, but was mostly downhill, into the crater.

Temperatures were chilly in the parking lot, so we began our journey bundled up, shedding layers as we descended into the crater. According to a park ranger, Palikū is one of the wettest regions in the world, and true to his promise, it began to rain as we neared the campsite. By the time we arrived at the campground, the rain was coming down in sheets.

We awoke to sunshine and marveled at the lush mountains surrounding us as we cooked up a pot of oatmeal. After a slow morning exploring Palikū and letting our things dry out, we packed up and began the 7-mile journey to Holua, our second wilderness campsite.

A mile or two into the trek and we felt like we were in a post-apocalyptic world: there were barren lava fields as far as the eye could see and not a soul in sight. It was eerily stunning.

When we reached Holua, we pitched our tents and were treated to one of the dreamiest sunsets I’ve ever seen. Once it grew dark, we laid out our sleeping pads and stared at the incredible spattering of stars before drifting off to sleep.

There is no other word to use to describe that final climb than brutal. We climbed 2,000 feet over 3.5 miles and while the views were incredible, we were retracing our steps from the first day, so we simply put our heads down and powered up the final hill.

After parking lot high fives, we piled into the car and cruised back down to sea level.

Conclusion: Why You Should Go

When you visit Haleakala, you’ll forget you’re in Hawaii. The scenery is incredibly unique and diverse and is impressive in a way that is difficult to describe. Where Hawaii is crowded, the backcountry trails of Haleakala are empty, providing a much-needed escape from the busy cities.

Over the course of your trek, you’ll experience rain, altitude, chilly temperatures, sweltering sunshine, and a variety of different sights and ecosystems. If you’re looking for a challenge and a unique way to experience Hawaii, add Haleakala to your list.

This 3-day backpacking itinerary is also just a sample: there are a plethora of wilderness campsites, campgrounds, trails, and distances to choose from. Popular, can’t-miss trails include the Keonehe‘ehe‘e (Sliding Sands) Trail, Halemau‘u Trail, and trail across the crater floor.

Haleakala was a lot colder and wetter than I had expected. While I had all the typical backpacking essentials, these were standout pieces of gear for this trip. 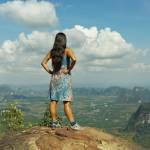 Hiking attire for women has certainly changed over the past few years from shorts and a T-shirt to leggings and a sports bra or tank top. I’d like to make a case for why a hiking dress is a great choice that shouldn’t be overlooked, specifically the Columbia Women’s PFG Freezer III Dress. This dress is comfortable, packable, and cute! Read more…