Her story seems inconceivable. She has no GPS tracking and is an unknown in the world of record-breaking thru-hikes. But this weekend, on the heels of Karl Meltzer, Kaiha Bertollini trekked to the top of Springer Mountain at the southern end of the Appalachian Trail in Georgia and proclaimed a world record time of 45 days, 6 hours, and 28 minutes.

Editor’s Note: Since the publication of this article, several facts have been revealed that cast doubt on the validity of Bertollini’s claims. For now the record is clearly Karl Meltzer’s. Bertollini faces a large burden of proof in defending her claimed FKT, which she said she is building now. GearJunkie will continue to monitor this story and update as it develops. 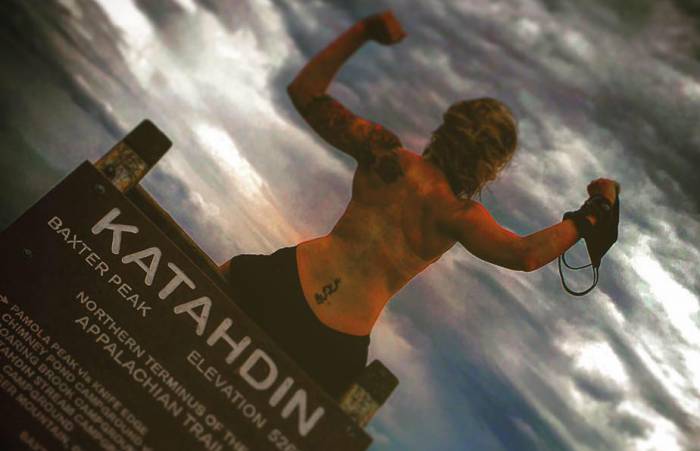 And she says she did it self-supported. 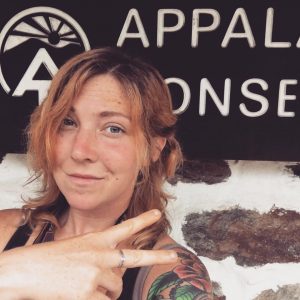 If her claims hold up, Kaiha “Wildcard Ninja” Bertollini just broke every record ever set on the Appalachian Trail. Not only would this be the fastest self-supported through-hike of the A.T. (beating Heather “Anish” Anderson’s 2015 record of 54 days), but it even tops every supported hike (beating ultra-running legend Karl Meltzer’s day-old record of 45 days, 22 hours, and 38 minutes).

We reached out and spoke with Bertollini today, and she provided some insights into her endeavor. While the verdict is still out among the A.T. community as to the veracity of her claims, her story is incredible, and it begins with a sexual assault in 2010.

Why would a hiker with the goal of setting a through-hike record not carry a GPS? In her own words, Bertollini said she didn’t know she needed one. Her goal at the outset was 53 days (as she posted on Facebook on August 2). That time would have beaten Anderson’s and opened her FKT attempt to public scrutiny. 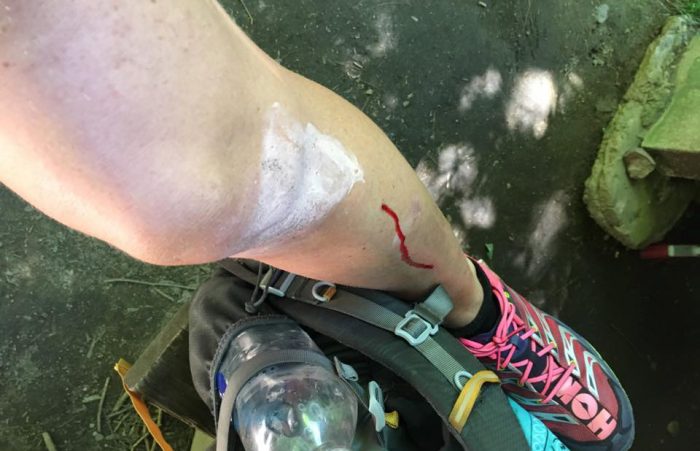 But finishing faster than Meltzer was not in her original plan, and her hike will certainly raise more eyebrows, and questions, as the world begins to peer into her undertaking.

Bertollini did not leave the virtual trail of breadcrumbs marking her path. What she may have left is a trail of evidence, the stops at shelters and hostels along the way, and her meetings with other hikers on the path.

She also leaves photos posted to social media – some marked with geolocations – that record her existence along the trail this summer.

Record or not, Bertollini’s story is interesting.

It all starts in 2010. According to Bertollini’s blog, Hike for Our Lives:

In 2010 while I was serving in the military I was sexually assaulted by multiple men in my unit while stationed at Fort Stewart Army Base in Hinesville, GA. The events of that night forever changed the way I connect with the world around me. However, with time the events from that night also lead me down a path of self-empowerment, self-love, and self-respect that no one will ever be able to take from me again. Although, some things will never be the same. I am no longer afraid to speak out against sexual assault and oppression of any kind. Standing up for all of our rights to exist.

She was discharged from the Army on March 2, 2012. She then continued to battle with post-traumatic stress disorder, brought on by the sexual assault, she said.

“That whole part of my life, trying to work, moving to Atlanta from Savannah. Dealing with PTSD. I was arrested twice, but the charges were dropped. It was a dark time for me,” she said on Monday.

Then she hit rock bottom.

“In 2015, it was a shitty year,” she said. “I lost my dog, lost my job. I’d worked hard to become financially secure, but when I lost my job, I lost everything.”

And then, on New Year’s Eve, she met a thru-hiker for the first time.

“A friend introduced me to another friend who had just done a SoBo hike,” she said. “We talked all night about the trail. He had that trail sparkle that most thru-hikers do. I had nothing holding me back. I asked my mom if she’d watch my dog. My friend held onto my clothes, which was all I had.”

“Told the bank to repo my truck, and left it in Pearisburg, VA.”

And that was the start of her journey.

A Hike South, Then North, Then South Again

From there, she hiked to the A.T.’s southern terminus for the first time, covering 180 miles of Virginia. 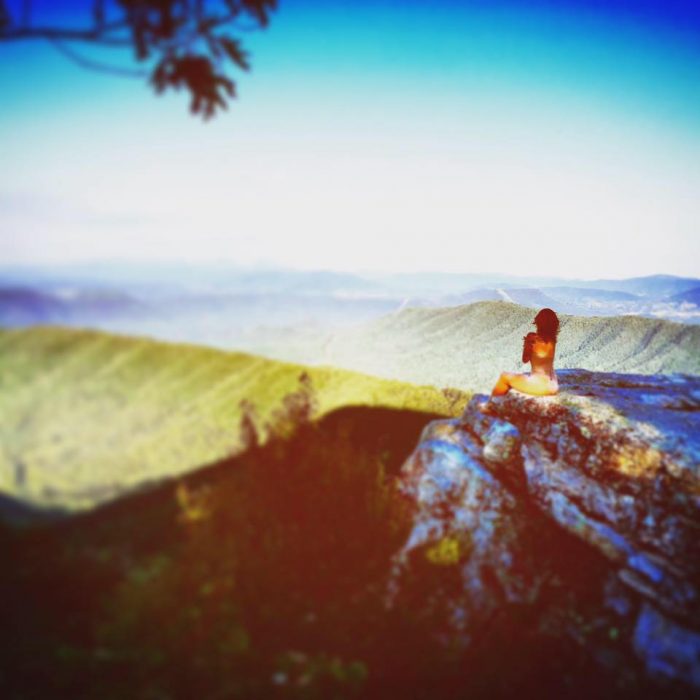 She reached the southern terminus in early March, then headed back north after catching a ride with a trail angel named Sparky up to Pearisburg, where she’d originally started, to finish the rest of the miles to the terminus in Maine.

“I was going north and there was nobody out there. I was by myself for like 9 days,” she said.

She arrived at the top of Katahdin in Maine on August 4. She said those five months on the trail hardened her for the return south in which she made this proclaimed record time.

“That was mile-zero for myself,” she said of the turn around from north to south that through-hikers call a Yo-Yo. “I just turned around and went for it.”

What’s This AT Record Hoopla, Anyway?

For the uninitiated, the Appalachian Trail is a 2,190-mile trail that stretches from the top of Mount Katahdin in Maine to Springer Mountain in Georgia.

While most hikers take several months to hike the length of the trail, called a thru-hike, each year a few folks set out to dash the trail as fast as possible.

It’s important to note that the ATC, the management organization of the trail, does not recognize any speed records. These are unofficially kept by hikers and fans. Those who do try for records tend to build evidence of their achievements in a variety of ways. They often list their intentions on bulletins like Fastest Known Times billboard and carry SPOT or similar GPS tracking devices through the trips.

Photos taken on the route, and eyewitness accounts, add to the credibility of the story.

Bertollini is now relying on those who met her on the trail to verify her claims.

“Hostels that did mail drops can verify that I did it,” she said. A friend who’s hiked the AT previously sent mail drops to Bertollini, who used that food, and food purchased along the way, to complete the southward trek.

In the world of thru-hiking, most do it on their own, in “self-supported” fashion, by shipping food to drop points. Others — mostly athletes hoping to set a record or run a super fast pace — hike with a crew who brings their food and gear. That method is considered “supported.”

Bertollini hiked self-supported, which makes her blistering pace all the more remarkable, and also questionable. Her only outside help came from trail angels, people who pass out small items or favors to anyone hiking the big distances.

“I had some trail angels leave things along the way like trail magic,” she said. People who knew where I would be by my mileage and left stuff. Calamine lotion for poison ivy. I had stinging nettles, which I thought was poison ivy.”

She claims to have hiked steadily, sleeping only when exhausted. This equates to just a few hours a day, in two- to three-hour segments.

“Walking all day or night on very little sleep, after so many days and nights, I just couldn’t sleep. I’d walk until I was literally so exhausted that sleep took over,” she said. “I did it by myself. Hoka donated four pairs of shoes. Zpacks donated a shelter, because I didn’t have one on me.”

Ultra-running legend Karl Meltzer was just a day or two in front of Bertollini as she made her way down the trail, and she said she was very aware of his presence. 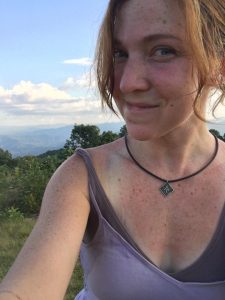 “I’ve been trying to catch that S.O.B. the whole time,” she said. “I had this fantasy that I would catch his crew. He summited a day before me” at the southern end.

Bertollini never did catch Meltzer, but if her time holds up, she did beat him, even though she had no crew to speak of.

We reached out to Meltzer, and to Scott Jurek, a renowned ultra-runner who set the previous A.T. supported record and served on Meltzer’s crew, for comment. Neither men had responded by the time of publication, but we will update this story with comment if they respond.

Heather “Anish” Anderson did respond to our email. Anderson did not wish to comment, but stressed the importance of documentation in FKT attempts.

Indeed it is. Furthermore, Fastest Known Time guidelines followed by many athletes have been in place for some time. They include stating intentions publicly, and with current record holders, inviting public participation, and meticulous record keeping.

On August 4, 2016 after completing a Northbound hike from Georgia to Andover, ME, I will turn around and complete a Southbound thru-hike in less than 90 days, but also attempt to break the record and fastest known time of fifty-four days and seven hours set by Heather “Anish” Anderson last year. This will be the hardest thing I have ever attempted to do physically and mentally. I hope my story gives others the courage and strength to speak out publicly against sexual assaults, rape culture, and gender inequality. I want to create a bridge that connects these victims to the positive benefits of fitness as a lifestyle and permaculture and the tools offered to them while they seek their own paths towards self-empowerment, love, and respect.

Thus, some elements of Bertollini’s are easily verifiable. Others, most notably her specific track through GPS hard data, are impossible.

“Hostels that did mail drops can verify that I did it,” Bertollini said.

Lonely On The Trail 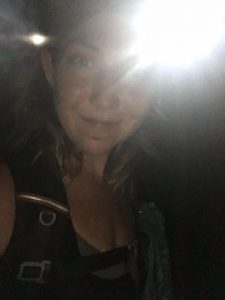 While well-known athletes like Meltzer and Jurek meet fans on the route and are supported by sponsors like Red Bull and Clif Bar, respectively, Bertollini was mostly alone out there.

“I’m an introvert. I have a hard time with attention, I really do. I was hoping to deflect it to the bigger issues,” she said, meaning to her Hike Of Our Lives project. “But this was loneliness that I’ve never felt before. The loneliness was really hard. I walked and cried a lot of the time. My emotions are everywhere. I’ve never felt this way before.”

End Of The Trail

Now that the hike is completed, Bertollini faces the new challenge of defending her FKT claims.

She’s put the call out on social media to ask those who saw her along the trail to come forward and validate some of her claims. With such short time between her finish and the time of publication, GearJunkie cannot verify or refute her record.

Regardless how history washes out, and whether her feat is regarded as a record, carries an asterisk, or is outright rejected, her mission to give victims the courage and strength to speak out publicly against sexual assaults, rape culture, and gender inequality appears well intentioned.

“I don’t view myself as a professional athlete, this is something I did to raise awareness of a bigger issue,” she said, adding that she thinks the community of people she met on the AT will verify her claims. “I’ve never felt so supported in my life. I feel like everybody has my back for the most part. Everything is as documented as I could get it and still be able to walk.”

We’ll be following Bertollini’s story, and we hope to hear from others with insights into the endeavor.