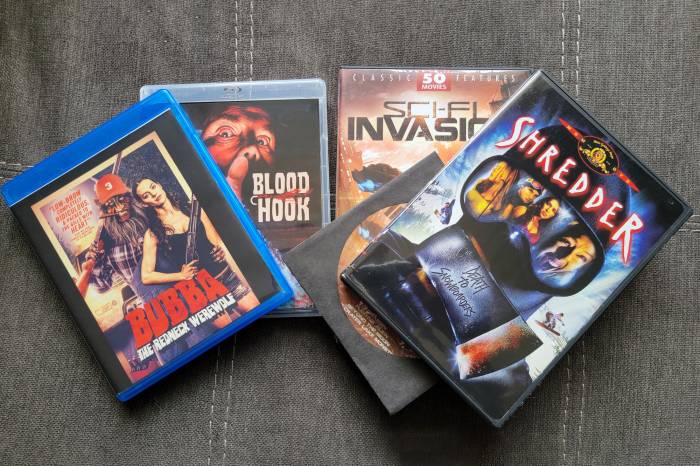 Slasher films, monster movies, and gross-out cult classics — these are the five outdoor B-movies you need to see.

There’s something cozy about a bad movie. Like a warm campfire or a meal around the grill, they’re an experience best shared with friends. Even if the firewood is wet and the chicken’s been burned to a crisp, you’re experiencing that badness together. That gave me an idea.

See, a lot of terrible films are set in the woods. Why? Because shooting there is cheap. But for every tongue-in-cheek gem of the small screen, there are 20 hopeless slogs with as much charm as a half-dried puddle.

So to help you steer clear of these cinematic pitfalls, I’ve assembled a list of five outdoors-themed films that fall into the more charming category of “So bad, they’re good.”

A word of caution before proceeding: Three of the movies are R-rated, and one lacks any MPAA stamp at all. I’ve avoided listing anything that I felt was genuinely mean-spirited or in poor taste. But if you grew up on franchises like “Friday the 13th” or late-’90s films like “Scream,” know that most of these are in the same vein.

Anyway, on to the movies.

The Best B-Movies Set in the Outdoors

Despite evidence to the contrary, someone on this film knew what they were doing. The basic story is this: A meteor strikes a lake in rural California, heating the water to almost 90 degrees.

This wakes up an ancient plesiosaur, who proceeds to terrify the locals. It’s a wonderful blend of bad acting, worse special effects, and all the ’70s style you can handle.

But like I said, there’s a curious self-awareness here. The stilted dialog is played to the hilt, to the point of being comical. And some of the camera cuts and scene choices are (I believe) intentionally hilarious.

Yeah, there are some dead spots between monster attacks. But the scenery around Susanville’s less-famous Crater Lake is actually pretty neat.

Gear Takeaways: If you want to keep an eye out for giant lizards that go bump in the night, check out our recommendations on the best headlamps and flashlights.

How to Watch: Like a lot of films on the old 50-Movies packs, I’m pretty sure “Crater Lake Monster” is in the public domain. The whole thing is available on YouTube, or pony up for the Blu-ray, and get “Galaxina” in the bargain.

Shot on location in Hayward, Wisc., this film revolves around a group of Illinois tourists navigating a web of murder and intrigue in the self-proclaimed Musky Capital of the World. There’s a memorable cast of characters, plus some genuine comedy that plays up the tension between the rural Wisconsinites and the visitors on whom their livelihood depends.

This one earns its slow burn. The focal thread of the fishing contest gets under your skin, and the ludicrous death scenes really (sorry) set the hook.

Gear Takeaways: If you find yourself with a case of “Musky madness,” check out our roster of lures, or maybe pick up one of Benchmade’s fillet-style knives.

How to Watch: This one came to my attention thanks to the folks at Vinegar Syndrome. Their Blu-ray release features a wealth of behind-the-scenes material to complement the new 2K scan from the original camera negative.

If there’s one thing the last 40 years of films have taught us, it’s “Never take a group of your college friends to an isolated spot in the woods.” And the protagonists here were smart — they decided to go to an abandoned ski lodge, instead. Sure, there may have been a murder or two in the chalet’s past, but what could go wrong?

A lot, it turns out. This film gets right to the action, with a mountainside murder just 3 minutes in. It earns its R-rating, and quick. Also, fair warning: This movie is painfully of its time period. With soul patches and cargo pants galore, plus a soundtrack mixed from the CD changers of a high school parking lot, it’s like a double-diamond of the early 2000s.

Gear Takeaways: If you’re looking for a more modern look on the slopes, check out our list of the Best Snowboard Jackets of 2022.

How to Watch: This one never got an HD release, and it’s not hard to see why. Like so many memories of this era, “Shredder” is best enjoyed through the fuzzy lens of DVD. For just under $8, you can grab a copy from Amazon.

Remember when I promised I’d avoid listing anything in poor taste? Well, that wasn’t exactly a lie. See, this entire movie is in poor taste, but that’s part of the fun. It centers on Bubba Blanche, a ne’er-do-well kennel worker who’s been forsaken by his love.

This leads Bubba to make a deal with the literal devil, who turns him into a surprisingly well-made-up werewolf. From there, Satan goes about the small community, granting the townfolks’ wishes in unforeseen and horrible ways. Finally, it’s up to Bubba to outduel the devil and put things right.

This movie, like its villain, is wicked through and through. It’s lowbrow on the surface, yet surprisingly clever and endearing. The writer and director (who also stars as the devil) pokes fun at the small-town stereotypes, but clearly has a soft spot for the idea of community.

True, this is less of an outdoors movie and more of a tale of rural, comic lycanthropy. But between bouts with robbers, Bubba manages to engage in plenty of woodsy pursuits.

Gear Takeaways: If you want to dress like Bubba, Duluth Trading Company has you, uh, covered. And if you’re looking for a four-slice toaster that would make the devil jealous, well, there’s always this Sunbeam from Amazon.

How to Watch: Lots of options here. Prime Video has it for rental, and the DVD is about $14. I snagged a Blu-ray a few years back, so they’re out there somewhere.

No, not that “Frozen.” This “Frozen,” starring Emma Bell, Shawn Ashmore, and Kevin Zegers, centers around the premise of getting stuck on a chairlift — for a week.

We join our three protagonists on a weekend outing at a small ski resort. And after a short setup, things take a turn for the worse as the lift operator shuts it down for the week with the skiers still onboard. Not to give it all away — and really, this story is laughably absurd — but things don’t go well. The trapped skiers face hypothermia, a potentially long fall, and even … wolves?

Absurdity aside, the longest film on our list is a very entertaining, slightly gripping movie that’s pretty well executed. It fits the B-movie genre to the core, and others clearly agree. It has a 63% rating on Rotten Tomatoes — respectable for a movie as silly as this one!

Gear Takeaways: Bundle up, kids. You’re going to want the warmest ski jacket one can buy if you plan to spend a week on a chair lift. That, and a pair of the warmest winter mitts!

How to Watch: This one’s incredible — it’s free on YouTube (among other places). Worth every penny! It’s also available on Amazon Prime.