Benchmade worked with renowned hunter Steven Rinella on a knife for the express purpose of turning wild game into table fare. The Meatcrafter is born!

Hunters and anglers know the value of a sharp knife. From the moment a hunter pulls the trigger, the priority is to get the animal carcass out of the woods, cooled quickly, and transformed into food. In many ways, a good hunter must be a good butcher to truly enjoy the fruits of their labor.

And exquisite tools, while not required, certainly don’t hurt. 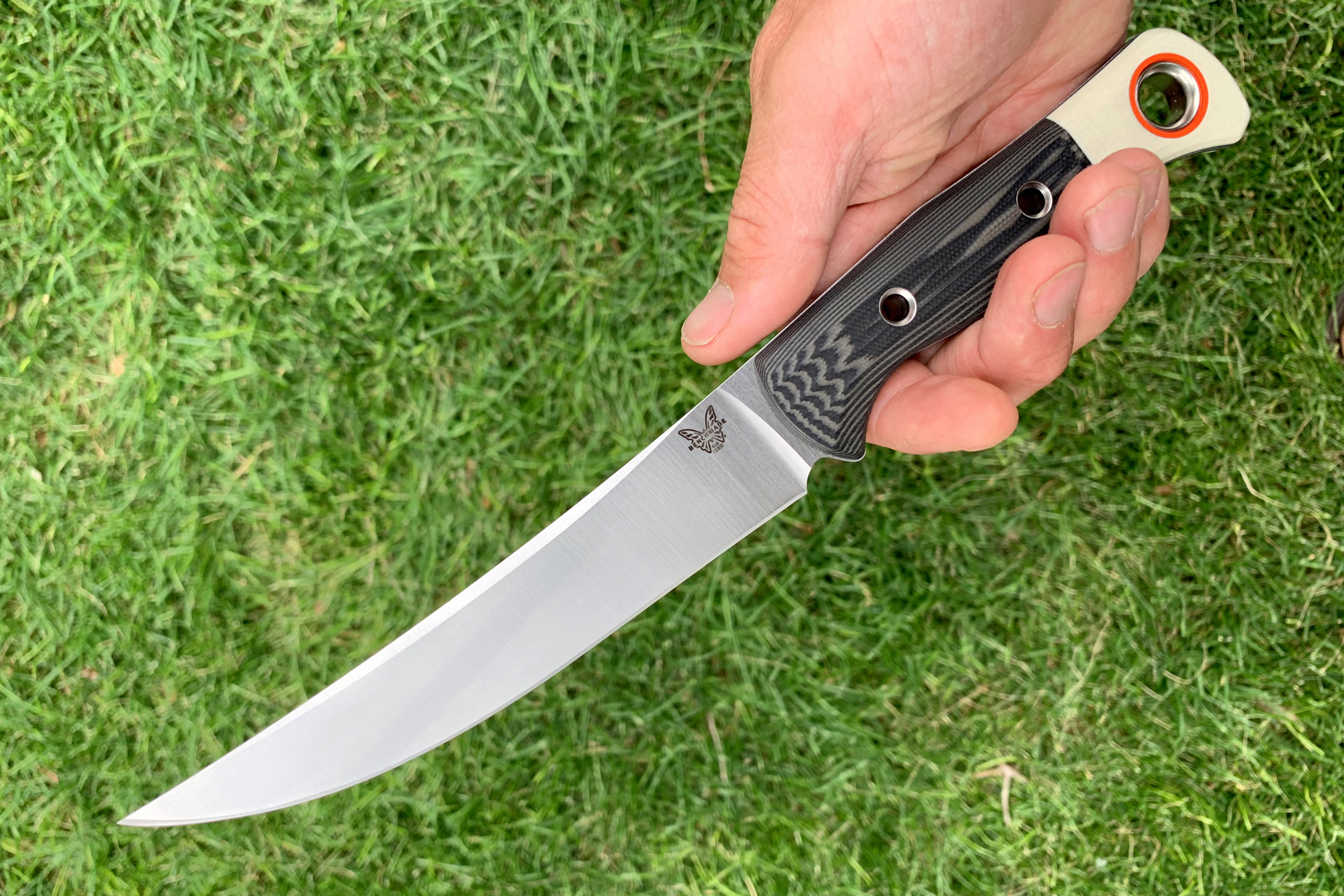 Enter the Benchmade Meatcrafter. I would hesitate to call the Meatcrafter a hunting knife. For me, it’s too big for much fieldwork. When gutting, skinning, and caping in the field, I prefer a smaller, high-quality hunting knife.

But once you move from rough field cleaning to the next phase — breaking down the animal into steaks, chops, roasts, and stew meat for the freezer — a razor-sharp knife remains a critical tool. And this is where Rinella and Benchmade want the Meatcrafter to fit into the process.

In a video here, Rinella talks about how he worked with Benchmade to design the Meatcrafter, which is essentially a boning knife. 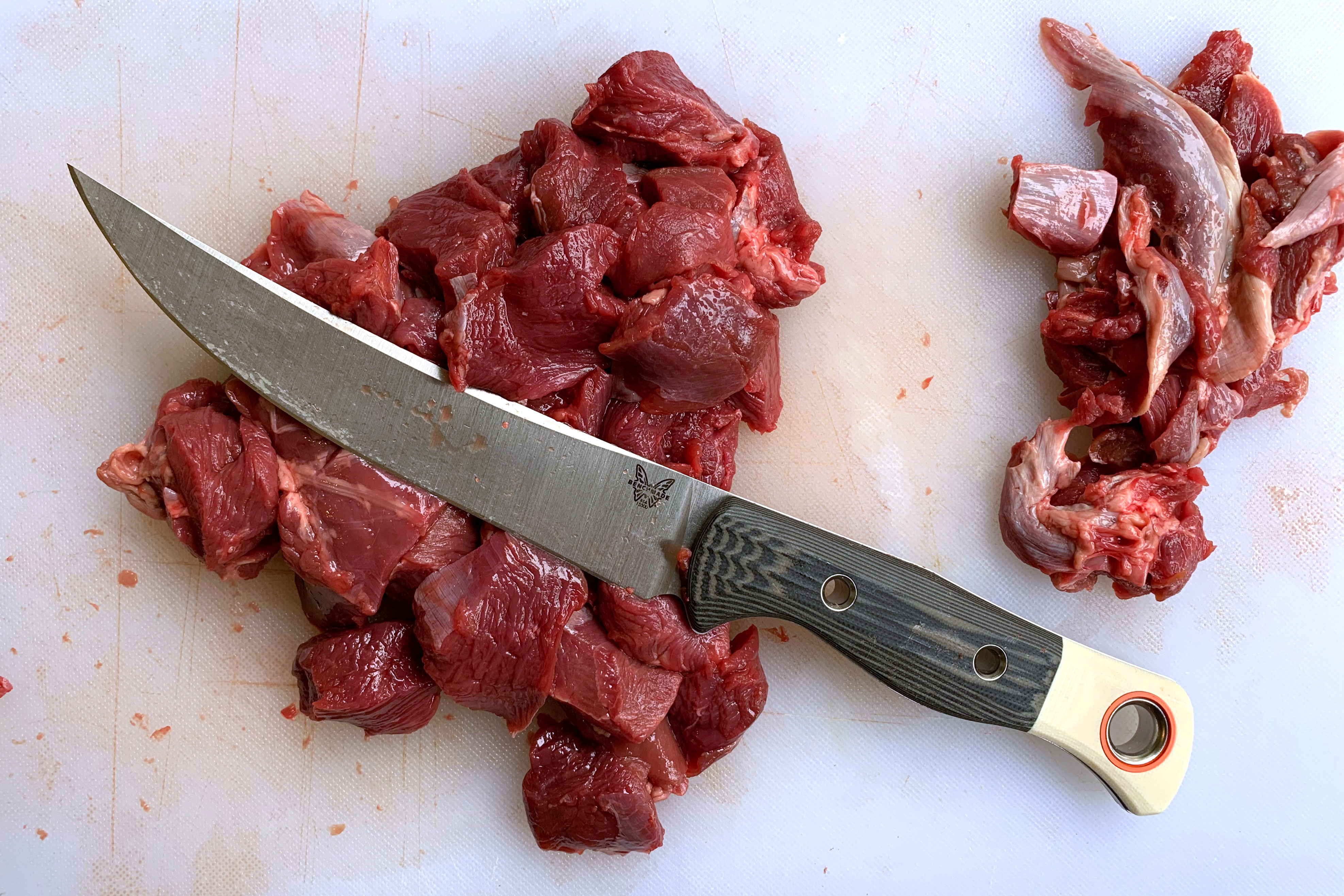 Benchmade sent me a Meatcrafter to examine and use before writing this article. It’s frankly tough to find any wild game to process in Colorado in the spring. So I did the next best thing: I pulled some venison from the freezer, thawed it, and went on slicing and dicing on the way to some carnitas.

Before getting into the review, I want to mention a few things about this knife that aren’t apparent on the surface. 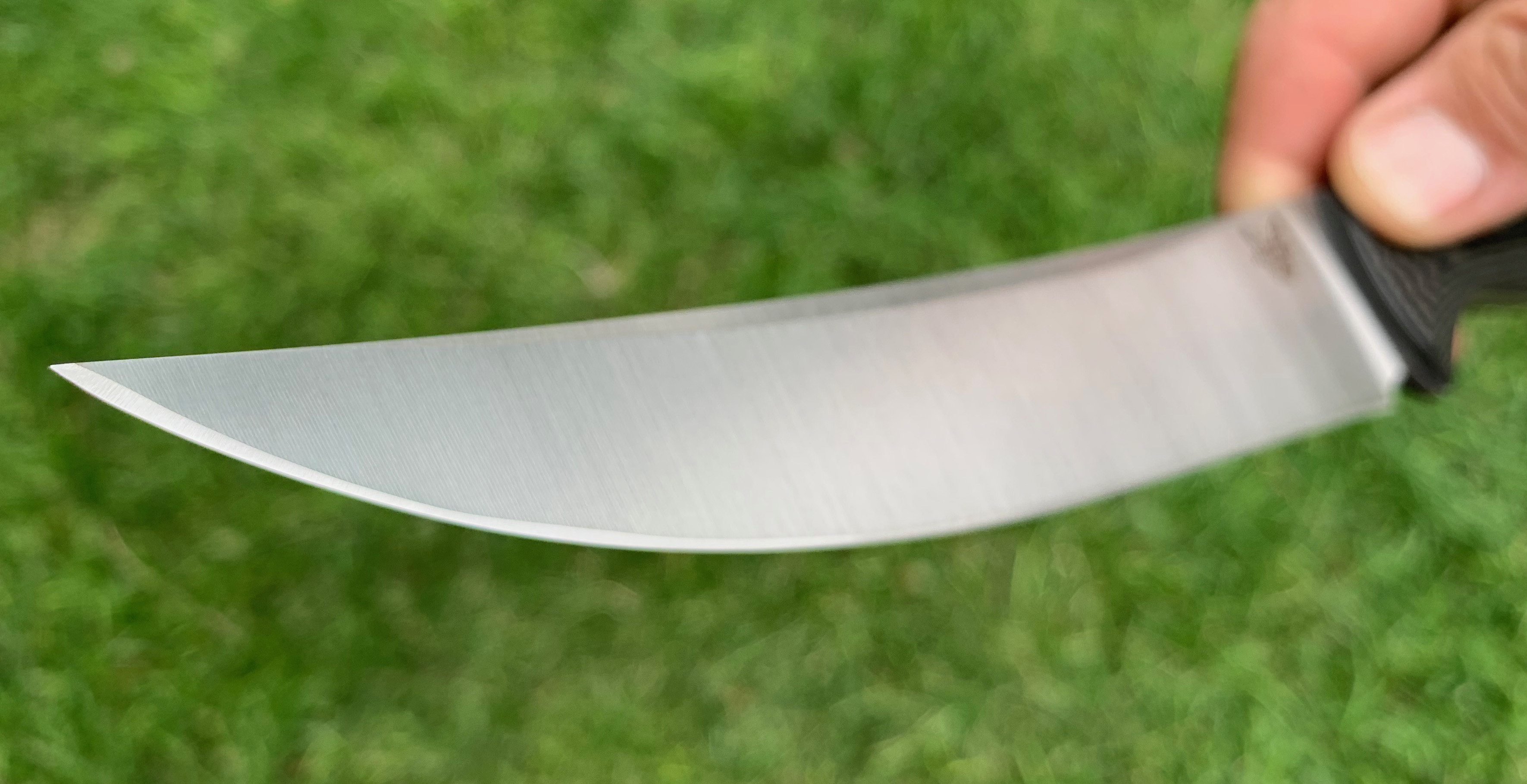 First, Benchmade used the Meatcrafter as a launchpad for its new SelectEdge technology. The brand hasn’t disclosed exactly what this tech does, but without going down a deep knife-sharpening rabbit hole, Benchmade notes that this provides a sharper, more polished edge than anything it has created before. And from the appearance and performance of the blade, it seems like there’s something here.

The edge is polished and smooth. Out of the box, it glints like a mirror to a perfect 14-degree apex. And for the record, that’s crazy sharp for a hunting knife. It’s also a little fine for a hard-use knife, so don’t plan on batoning this one through wood! This is a meat knife after all.

Second, the knife uses extremely high-quality “ingredients.” The full-tang blade is CPM-S45VN premium stainless steel, which provides a balance of fine grain, sharp edge, and blade flex. It’s a step forward from the excellent and widely used CPM-S35V from Crucible Industries and one of the first applications of this steel we’ve seen in person.

The black, brown, and ivory G10 handle is really a thing of beauty. It sits perfectly in the hand and provides an excellent grip at several angles. For those working through a pile of elk meat for hours on end, it’s a very nice texture and shape.

Finally, the Meatcrafter comes with a very nice Boltaron sheath. The material has a stiffness of Kydex but has a surface feel like nice leather. The knife fits in securely.

One note that speaks to the intended use of this knife: The sheath has no belt loop. I thought this a little odd until I considered that the knife will more likely ride in a pack, truck, or sit in the kitchen. While it would certainly work in the field, it’s not exactly meant for gutting or survival — it’s a meat-processing tool.

I had a few questions about the knife and sent them to Rinella. Check out his interesting replies below.

GearJunkie: Why did you decide to go with a scimitar blade shape?

Rinella: When I was working on this knife with Benchmade, the priority was versatility. We wanted to take their proven technology that produces the strength and edge retention of the kind of knives I take into the field, but stretch it into a longer, thinner blade that’s best for making precise and drawn-out cuts.

Our long, trailing-point blade lets you remove muscle groups in a single cut, work around bone and joints, and get into hard-to-reach corners so you can get a precise cut the first time around. Everything from the shape of the blade to the angle of the edge was developed specifically for this knife and for the kind of work I needed it to do.

The other day, I was filleting some lake trout with the Meatcrafter, and it was a dream. The tip was perfect for opening cuts and precision work, while the thicker portion of the blade easily sliced through the heavy rib bones. I love that thing.

Do you expect to carry the knife in the field at all, or will it live in your truck (or kitchen/garage/meat processing location)?

While I do a decent amount of processing in the field, most of the work is done at home on my butcher block. That said, this is now my go-to butchering and processing knife, so I’m taking it wherever I think it’ll be useful.

I might be cutting up a turkey on my tailgate or an elk hind in my kitchen, and it gets the job done right in either place. So far, I’ve been keeping mine in the DECKED system of my pickup truck half the time and in my kitchen knife drawer the other half.

What role do you see this knife filling that you felt was missing from the market?

You can easily find a great field knife, chef’s knife, or pocket knife, but in all my years of working with game meat, I’ve never found the perfect purpose-built blade for processing. I work with a lot of animals, from moose to beavers, and even if I’d found a knife that worked well for one task, it never had the full versatility I needed. The Meatcrafter fills those gaps.

While it seems a little stiff for a fillet knife, do you expect to use this knife on fish much?

For the right fish, definitely. I’ll often use a more flexible blade for something really delicate. But when I’m ripping burbot out of the ice, this thing makes cleaning them damn easy.

It’s best when working on four-legged fare, but throughout the testing process, we found that it can handle almost everything that ends up on your plate. I don’t imagine using it for panfish like bluegills and perch, but definitely for everything from walleye to salmon to tuna.

Obviously, a $300 knife is a significant investment. Who should buy this knife?

This knife isn’t for everyone. It’s made for folks like me: the ones that have always felt like their processing knives just aren’t up to snuff. When you spend as much time butchering game as I do, even small frustrations can take the joy out of the work, and using this thing helps keep me focused on why I do what I do. I want to create great meals for me and my family, and this knife makes that easier.

It’s a work of art and one that I’ll be using for years to come. My kids will have to fight over which one of them gets it after I’m dead.

This is a super-early first look at the Meatcrafter. So far, I’ve used it to process a little stew meat from a deer and a bone-in pork loin roast. And without a hunting season for months, this knife won’t get to properly craft a full carcass for some time

But my initial impression is great. The long belly of the scimitar shape and the very fine point give you both a very fine/exact blade as well as a long cutting edge. It provides versatility for small, accurate cuts or long slices, both of which are a major part of meat processing.

The flex of the knife is just right for deboning large cuts of meat. While stiffer than a fillet knife, it offers enough flex to closely follow bones in big game. And while not its intended purpose, it would probably work fine to fillet a fish. 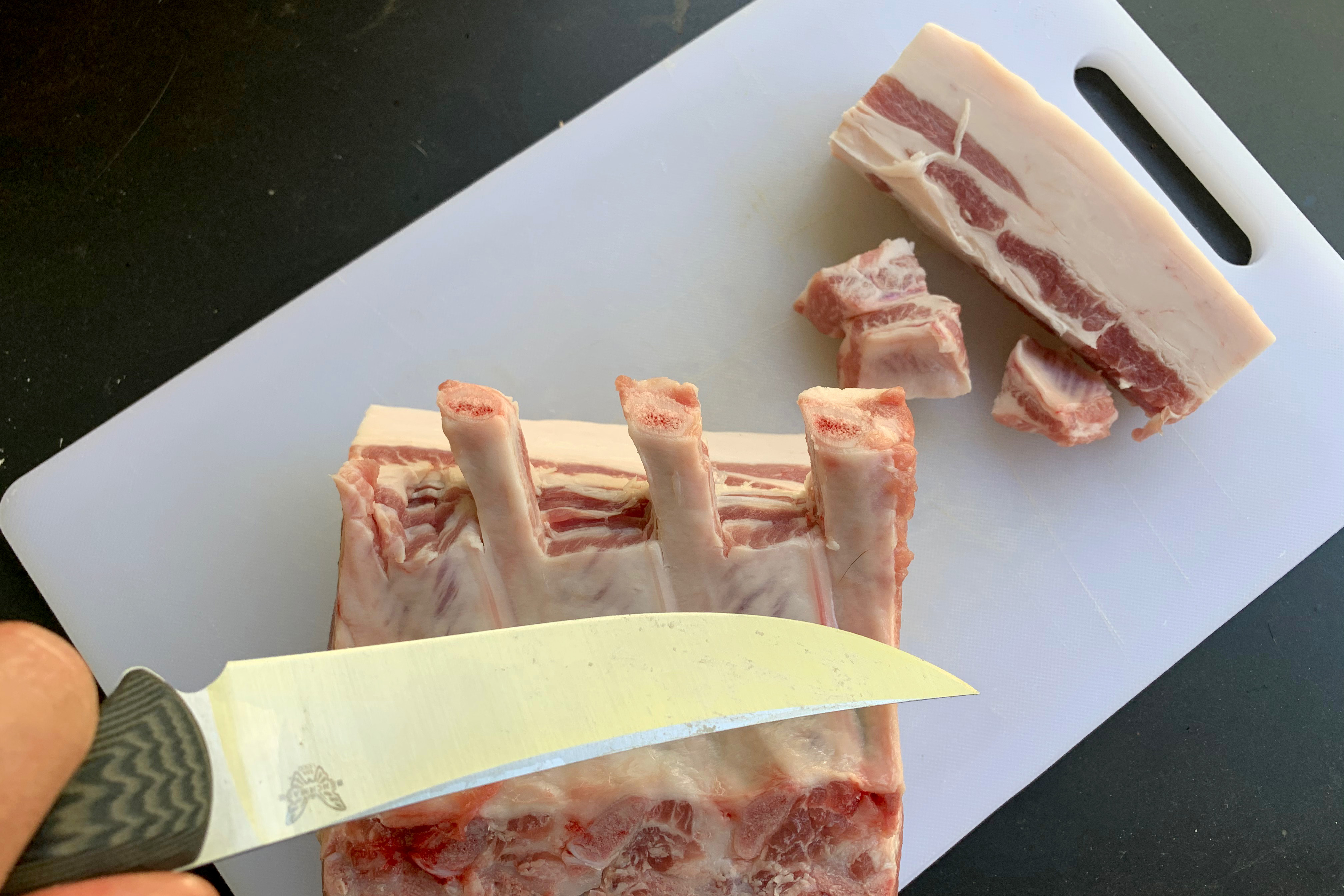 The handle is lovely to use. And while the appearance of the multiple G-10 colors is in the eye of the beholder, I personally love it. Its layered appearance, with splashes of color around the large lanyard hole, just oozes quality.

With a fresh edge from the factory (which you can have re-serviced by Benchmade for free for the life of the knife), the blade fell through meat like it wasn’t there. Cutting away silver skin took almost no pressure as I touched the blade to the meat, lifting the skin away from the muscle. It was impressively sharp. And cutting pork was like the proverbial hot knife through butter.

I am excited to use it on a big project. I expect it will be a lot easier thanks to such a fine tool.

So, who is it for? My gut tells me that serious hunters who like to process their own meat from field to fork will love this knife. It makes the work of cutting down big-game muscles into small cuts of meat easy, and I expect it will hold an edge well for most of a hunting season with regular stropping. 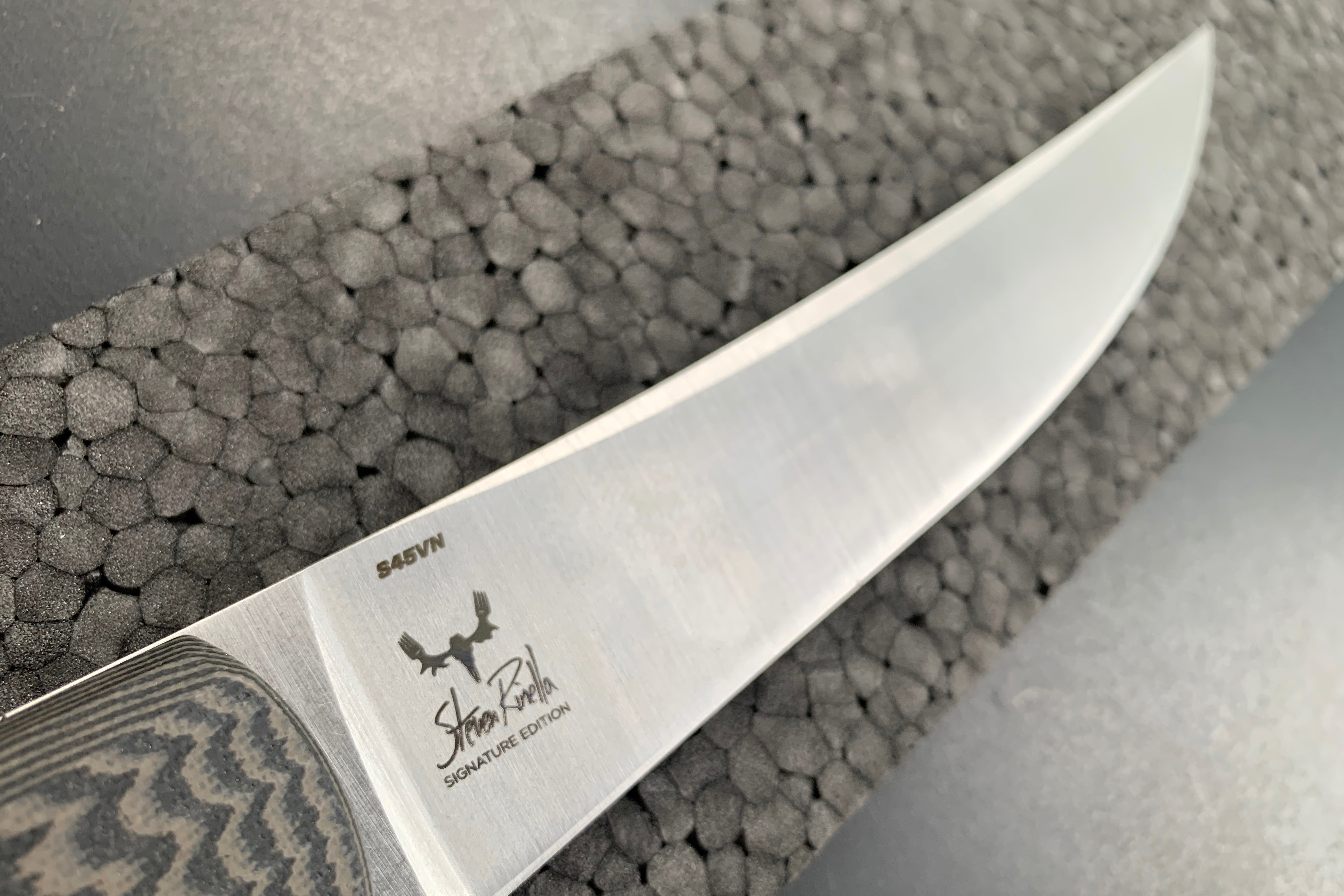 So now, what will be the hangup for many people? Price. The Meatcrafter rings in at a hefty $300. However you slice it, that’s a lot of money for a knife.

But I can pretty easily justify this purchase. If you take an elk to a butcher, you’re likely looking at a $400 bill just to have one animal turned into steaks, burger, and sausage. Do it yourself once, and the knife pays for itself.

Obviously, you need other tools too, like a meat grinder and sausage packer. But these things all pay for themselves over years of use and animals processed.

Avid hunters who fill freezers in the fall will likely enjoy a high-end knife like this season after season. And yes, you can use a much cheaper knife to do the job, keeping a butcher’s steel at the ready.

But if you enjoy a finely crafted tool and have the budget to buy one, I expect the Meatcrafter will do its job flawlessly for years to come.

Up Next: This Affordable App Will Help You Better Navigate Your Hunts