Garmin’s second-generation Instinct series takes one of the brand’s most popular watches and — as you’d expect — makes it better.

The Instinct Series from Garmin brought affordable and kickass smartwatch technology to the masses. And today, the brand releases its second iteration of the Instinct.

A lot of exciting upgrades factor into the Instinct 2 Series, and 19 versions of the watch (color, model, dedicated edition, etc.) are available. An example of one of these dedicated editions drops today as well; the dēzl is designed to help long-haul truck drivers stay healthier on the road.

First and foremost, battery life is wildly prolonged. A smaller 40mm bezel size — the Instinct 2S — is offered in the lineup, compared to the classic 45mm bezel. And techy upgrades allow for even more on-the-go usability. I’ll jump into all of that below.

Additionally, I’ve spent the last week with the Instinct 2S Solar ($450) watch on my wrist. And I have a few thoughts.

Battery Life for the Instinct 2 Series

In keeping up the basics, Garmin looked to extend and change the Instinct where it counted most. Obviously, no one likes charging watches. After all, the thing data mines constantly, and from your very own body. In a world of personal physiological data, every minute counts.

So, the Instinct 2 provides up to 4 weeks of continuous use in smartwatch mode. That’s without solar. Add in the Instinct 2 Solar’s capability, and you’re looking at the potential of never having to remove your watch to charge it.

This adds about 4 days of extra battery life onto the Instinct overall, and it extends the Solar capabilities indefinitely. I’ll talk a bit about that in my review below.

The original Instinct is no slouch when it comes to technology. And the Instinct 2 Series simply adds more to the pot.

Tech upgrades like Incident Detection, Garmin Pay, and a huge increase in activity-specific data tracking are included in the Instinct 2. Some of these new activities include indoor climbing, backcountry skiing, daily suggested workouts, and MTB Grit.

Additionally, health measures like VO2 Max, a pulse oximeter, sleep scores, and more offer up the kind of daily information athletes used to only find in a research lab.

Of course, the Instinct 2 Series is GPS-ready, and it connects to Garmin inReach devices for SOS capability in the field.

Slimmer in profile, the Instinct 2 Series maintains its 810G rating for thermal, shock, and water resistance — down to 100 meters. I’m not sure how you could destroy it, barring destruction of your wrist.

And it’s not necessarily fashion-forward. This is a workhorse smartwatch, rugged and ready for action. Unlike its Fenix brethren, the smaller 2S series is not feminized. It maintains the look of the Instinct, just on a smaller platform for folks looking for that sort of thing.

Garmin also stays true to its pricing model on the Instinct, with the Instinct 2 Series starting at $350. 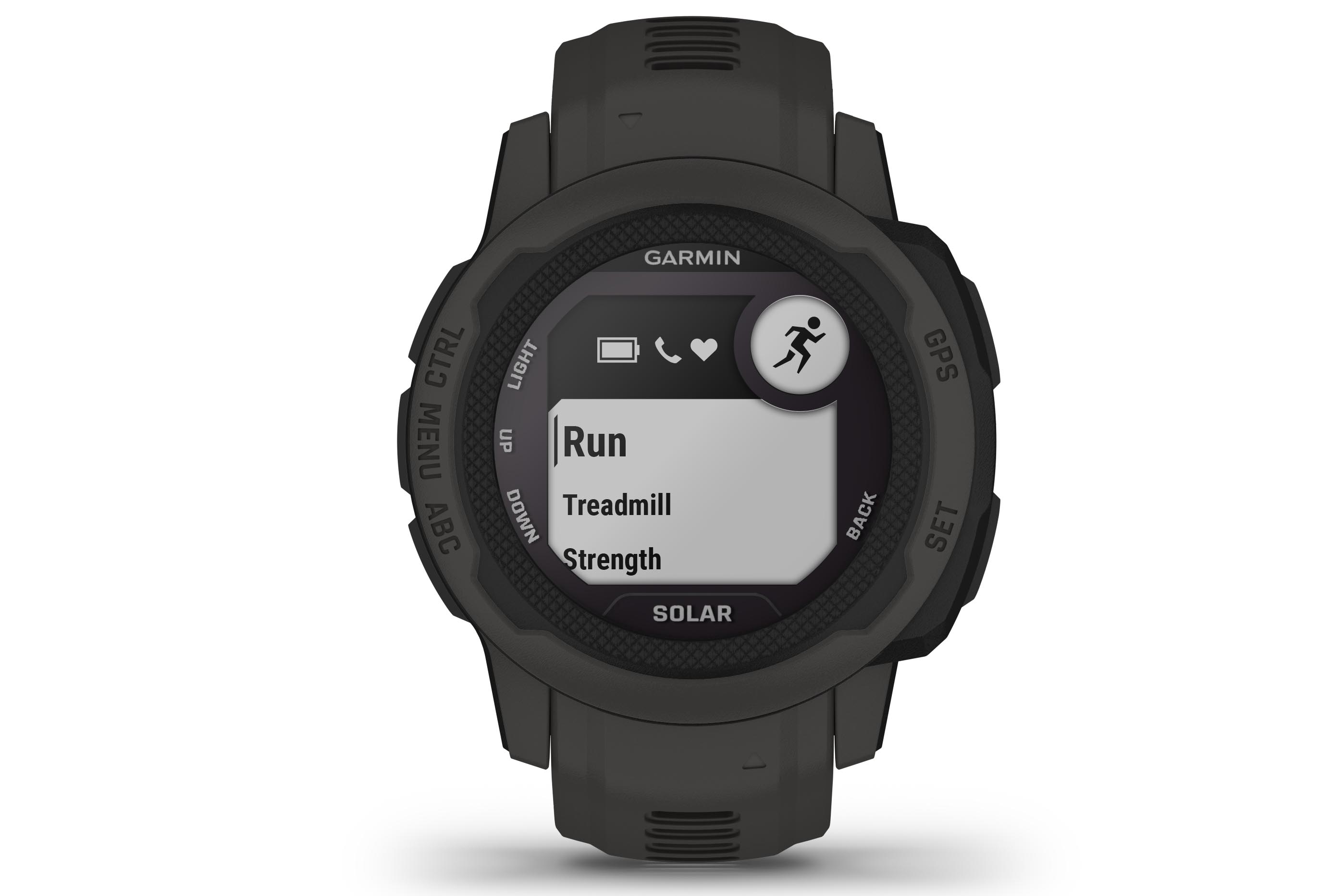 Let me start by saying that, though I depend on tech, I’d prefer less than more.

Generally, I’d like to throw my smartphone into a river, abscond to the early 2000s when flip phones ruled the world, and go into the wilderness where cell service dies a hard, cellular death. I’d prefer to write this article by hand, send it by snowy owl to my editor, and then listen to the fire crackle in the woodstove.

However, I received the Instinct 2S Series about a week ago. And since then, the small and slim black watch has gone almost unnoticed on my wrist. That is, until I want to know something and can avoid reaching for my phone.

Was I converted? We shall see. Here are more specifics.

Is the Battery Life Really That Good?

One of my main complaints with smartwatches is pretty frank. I don’t want to take it off to charge it all the time, and if I do, the watch will eventually just gather dust. That happened with another smartwatch; I just didn’t want to deal with another buzzing, charging item.

Solar changes that. I decided to wear the watch for 5 days on a minimal charge. On top of that, it’s winter in Montana and I work inside on a laptop most of the time the sun is around. Could the solar watch outsmart my lack of sun?

In short, it did. It beeped at me once that the battery was low, but it never quit. It also never got below a 2-day charge. It’s generally covered up when I’m outside, so I’m thinking the only spot it really got sun was while I drove.

Somehow, it kept ticking. I didn’t plug it in. Impressive.

Other Stuff I Enjoyed

As a smartwatch newbie, there was a bit of a learning curve to figuring out the Instinct 2S Solar and setting it up for the stuff I wanted to know.

I settled on a watch face that gave me a lot of data. I can see my steps, my elevation, the time, date, amount of messages I have, and the sunrise and sunset times. Paired to my iPhone, I learned which notifications I really needed to clean up, and which were nice to have on my wrist.

Using Garmin’s Connect app is more fun than I’d expect. I can see my steps, sleep quality, blood oxygen levels, stress, and more. It’s also somewhat shameful on days that I am stuck on my laptop for way too long.

The watch feels mildly passive-aggressive but not in a bad way. If you don’t work out, get your steps in, or do anything that puts your body into physical stress, well, you leave a helluva crumb trail as you go about your week. It’s motivating me to do more than usual. And have the stats to back it up.

Final Thoughts on the First Look

I really like the Instinct 2S Solar, but time will tell if it converts me to a smartwatch person. I will say that I plan on using features like Garmin Pay. And as a hunter and angler often out of service and alone, the ability to connect to my inReach directly from my wrist feels like a big safety win.

I don’t dislike anything in particular about the watch. But I’ve only worn it for a very short time, and I’m not asking a whole lot of it. I’ll add that I am looking forward to wearing the watch in hiking and hunting season when I pile on the miles, elevation, and effort in full.

And who knows? I might end up being a complete convert. If you’re looking for a smartwatch that requires little to no upkeep or charging, the Instinct 2 Series it’s a heckuva deal that starts under $400.

Up Next: The Best Electric Coolers of 2022