The Appalachian Trail spans more than 2,100 miles of beautiful wildland, but with it comes wildlife. The trail itself is home to a wide variety of creatures, including snakes. Here’s what to look for and how to react.

Before you head out for a hike, it’s important to know what snakes you are likely to see, what they look like, and how to safely navigate an encounter.

If you are thinking about taking on the Appalachian Trail, this article will prepare you for the snakes you may encounter along the way. While not all snakes you might see are venomous, some are.

So, read on to understand what you’re looking for on the trail, and how to handle a slithery situation.

Appalachian Trail: 6 Snakes You May Encounter

The Eastern copperhead can be found across the East Coast in states like Georgia, Tennessee, North Carolina, and Virginia. As you progress northward on the Appalachian Trail, you may even contact the Northern Copperhead in states like New York.

This snake is coppery-brown in color with distinct “Hershey’s kiss” brown patterning on its sides. If encountered, it will often freeze and rely on its camouflage to remain unseen when threatened.

This can be a problem, as Copperheads are one of two types of venomous snakes on the Appalachian Trail. Keep a careful eye on where you are putting your feet to avoid these snakes.

If you come across one on the trail, back away slowly and make sure you are at least 6-10 feet away from the snake at all times. 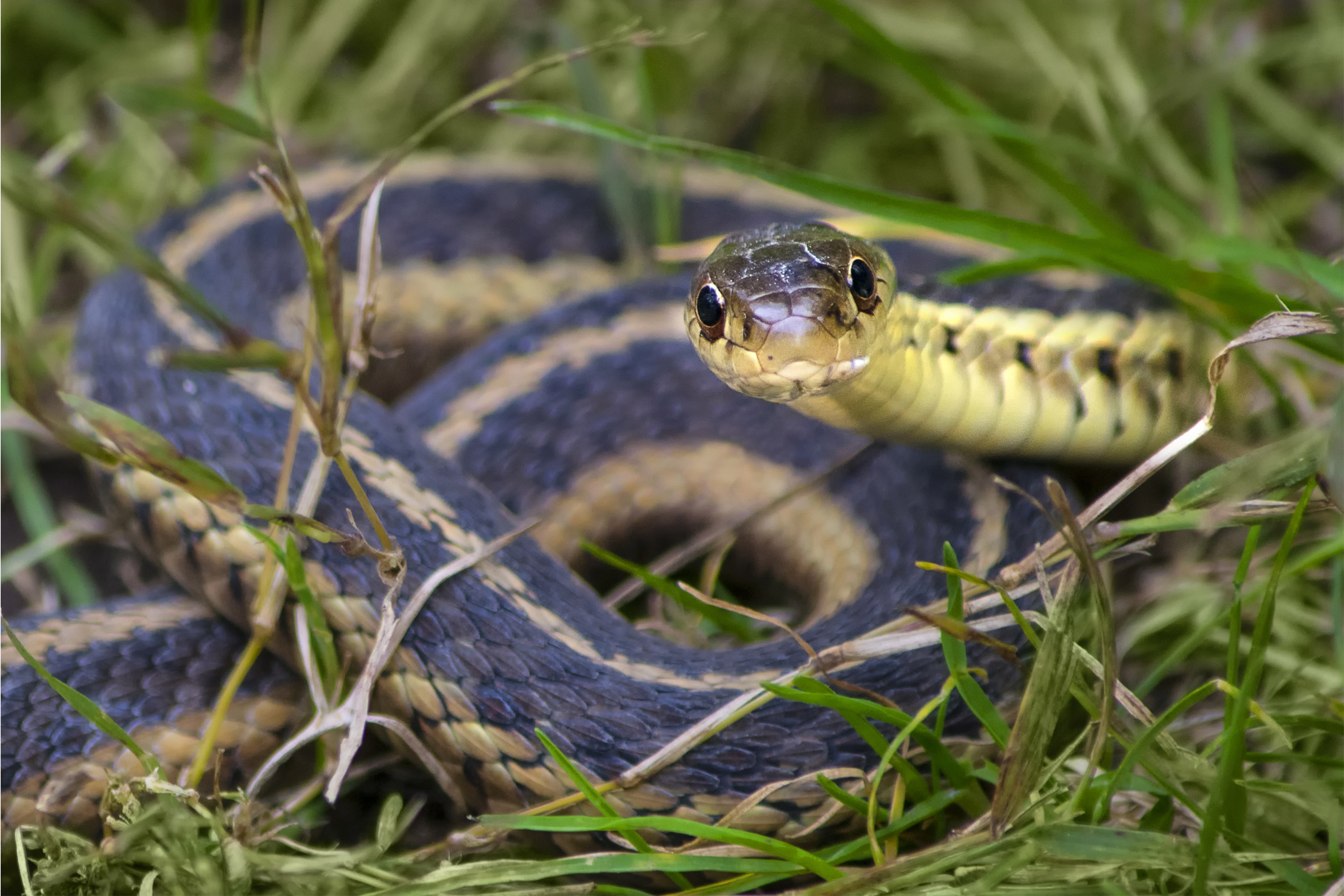 Along the trail, it is very easy to come across Eastern Garter Snakes. These snakes are identified by a brown, green, or gray body color with a yellow or cream-colored stripe down the middle of their back, and a checkered pattern on their sides.

These snakes are common along the East Coast, especially in states like Virginia. They are a docile species that are considered technically venomous, but are not dangerous to humans.

If you come across this species on the trail, you can leave them alone or, if you feel more confident handling snakes, gently move them out of your path.

These large snakes can grow between 3.5 to 7 feet long and are also known as Western Rat Snakes or Black Rat Snakes. They are normally black in color with a white or cream underbelly.

They are nonvenomous; however, they are known to emit a foul order and vibrate their tails to mimic rattlesnakes when threatened.

You can see this snake along the trail in states like Georgia.

If you happen to come across this species, it will be best to leave them alone. While not dangerous, their bite can pack a punch and the stinky musk can cling to your clothes. 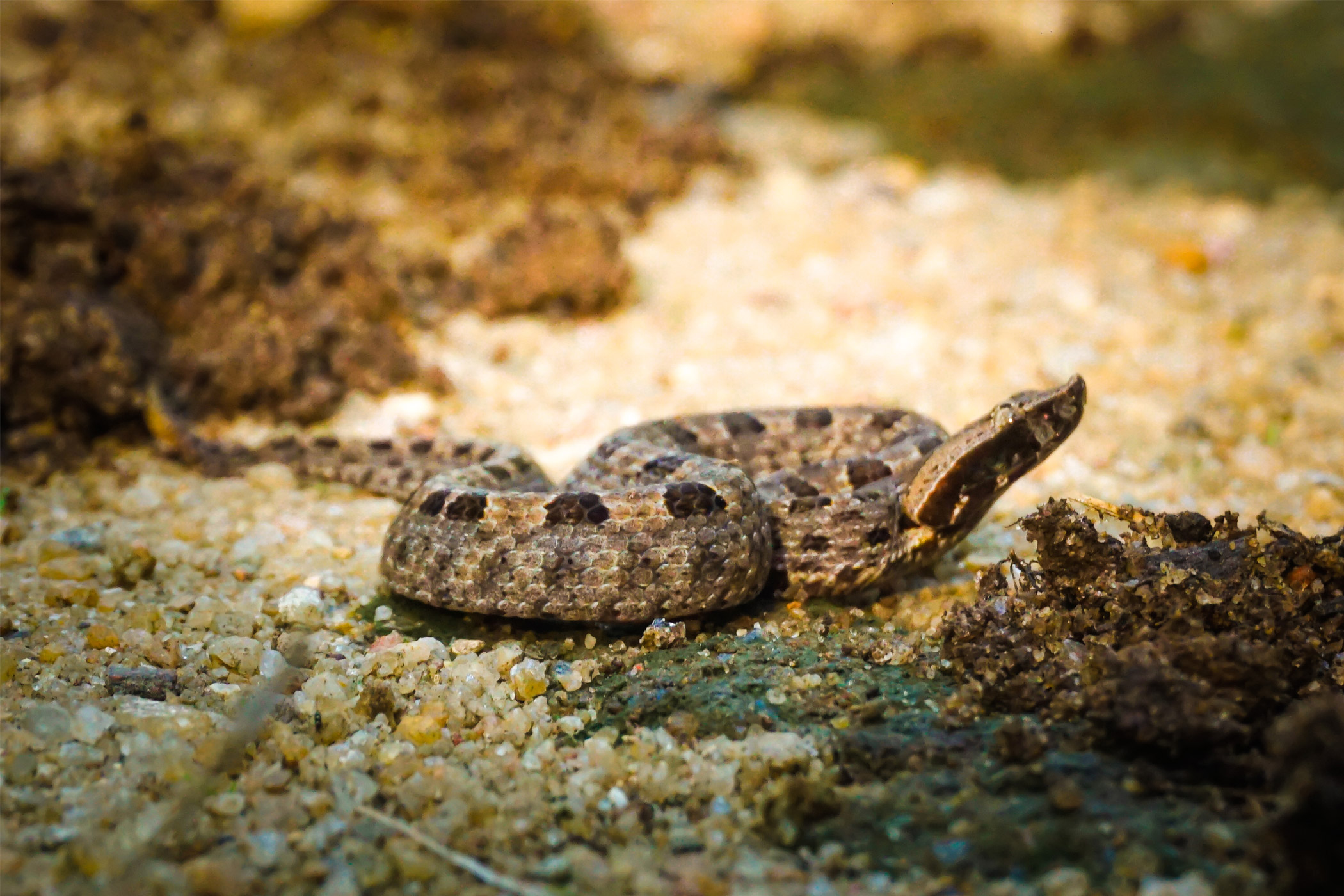 The Eastern Hognose is a fascinating species that you will likely encounter along the trail in North Carolina, Georgia, and even as far north as New Hampshire.

They come in a variety of colors like gray, orange, and brown, and they can be plain or patterned. The one consistent identifying characteristic is their upturned nose that gave them their name.

These snakes can get up to 3 feet long. They will flare their head like a cobra and then play dead when threatened. This is another species that is technically venomous but not dangerous to humans.

If you come across an Eastern Hognose on the Appalachian Trail, you should leave it alone, so as to not induce stress on the snake. But you need not worry about your safety.

These small snakes are usually brown, olive, black, or even blue-gray in color with a yellow, red, or orange neckband and underbelly.

They are usually no longer than 15 inches and between the Eastern and Southern species, can be found in every state along the East Coast.

These snakes are small, docile, and can easily be picked up and moved if necessary. They are nonvenomous and pose no threat to humans.

They rarely even bite when handled, so if you leave these snakes alone on the trail, they will not bother you. 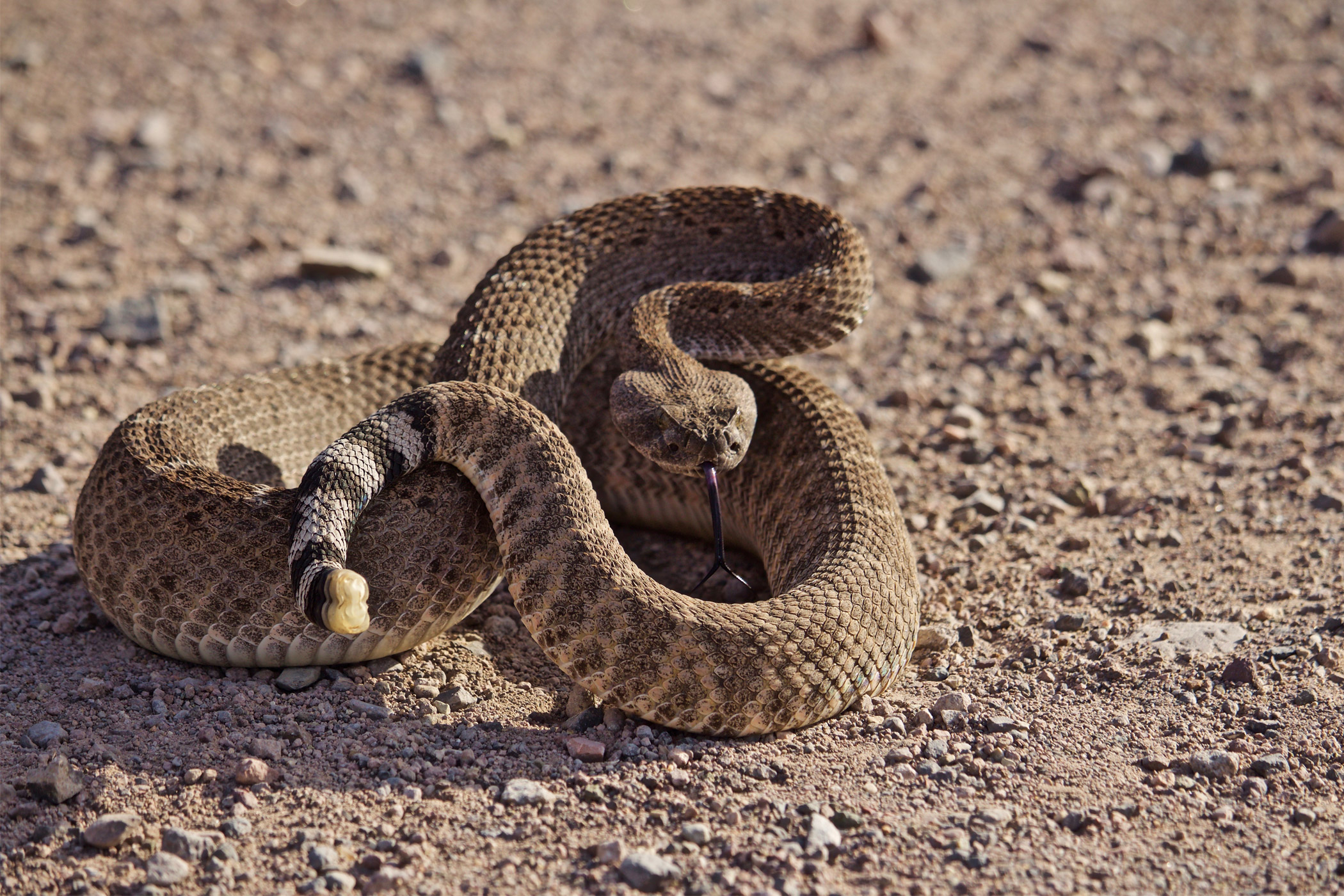 The second venomous snake you may encounter on the trail is the rattlesnake. Specifically, there are four types of rattlesnakes that inhabit areas near the Appalachian Trail.

Timber Rattlesnakes can be found along the entire East Coast, while Pygmy Rattlesnakes and Eastern Diamondbacks can be seen in North Carolina and Georgia. Lastly, the Eastern Massasauga can be seen as far north as New York.

These snakes have different colors and patterns but can be identified by the characteristic rattle on their tail. They will shake their tail and produce a loud rattling sound when threatened.

Because they are venomous, they should always be left alone when seen on the trail. Try to wait for them to leave the area, or pass by at a safe distance instead of trying to move them.

Are There Venomous Snakes on the Appalachian Trail?

There are only two types of venomous snakes you may come across on the Appalachian Trail and around six total species: the Eastern and Northern Copperhead, Timber Rattlesnake, Eastern Diamondback, Pygmy Rattlesnake, and the Eastern Massasauga.

When Should I Hike to Avoid Snakes?

If you want to avoid snakes, the best thing you can do is hike when it’s cold. Snakes are usually less active during the cold fall and winter months.

Because snakes need to warm their bodies through the sun, they will be most active during the warm times of the year. So, if you want to avoid snakes on the trail, go out when it’s cold.

What Should You Do If You Run Into a Snake on a Trail?

If you are hiking the Appalachian Trail and come across a snake, the safest thing you can do is leave it alone. There is always a chance you may come across a dangerous species on the trail.

If you aren’t confident in your identification skills, always treat the snake as if it is venomous and leave it be. Should you find a snake, freeze and slowly back away until you are at least 6-10 feet away from the snake. Once at a safe distance, you can wait for the snake to leave or find a way around it safely.

The snakes that call the Appalachian Trail home should not discourage you from hiking there yourself. While there are venomous species that can be found, there are also plenty of harmless species. Knowing which snakes are common and what to do if you find one is the first step to a fun, safe hike.

Nigel Robert is a lifelong reptile lover, biologist, and wildlife consultant. He has kept many reptile species including Leopard Geckos and Ball Pythons and has had hundreds of encounters with wild species. His goal is to provide trustworthy and comprehensive advice to anyone who may encounter wild or pet reptiles.

Up Next: Save Up to 30% on Outdoor Gear With REI’s Anniversary Sale