The V3 is the new flagship hunting bow from Mathews Archery, available in two sizes for hunters who prefer next-level agility or compact stability. It continues the brand’s trend toward longer risers and shorter axle-to-axle lengths. The V3 will replace last year’s award-winning VXR.

“The V3, both the 31-inch and 27-inch, feature our longest riser per axle-to-axle length bows that we’ve ever made,” said Mark Hayes, a Mathews product engineer. “Now you get a riser length that’s almost as long as some of our target risers. In fact, it’s longer than one of them.”

We talked more in-depth with Hayes about the unique geometry and Mathews’ continued push for stability and power in a smaller frame. But first, here’s a quick overview of the specs and new design elements. 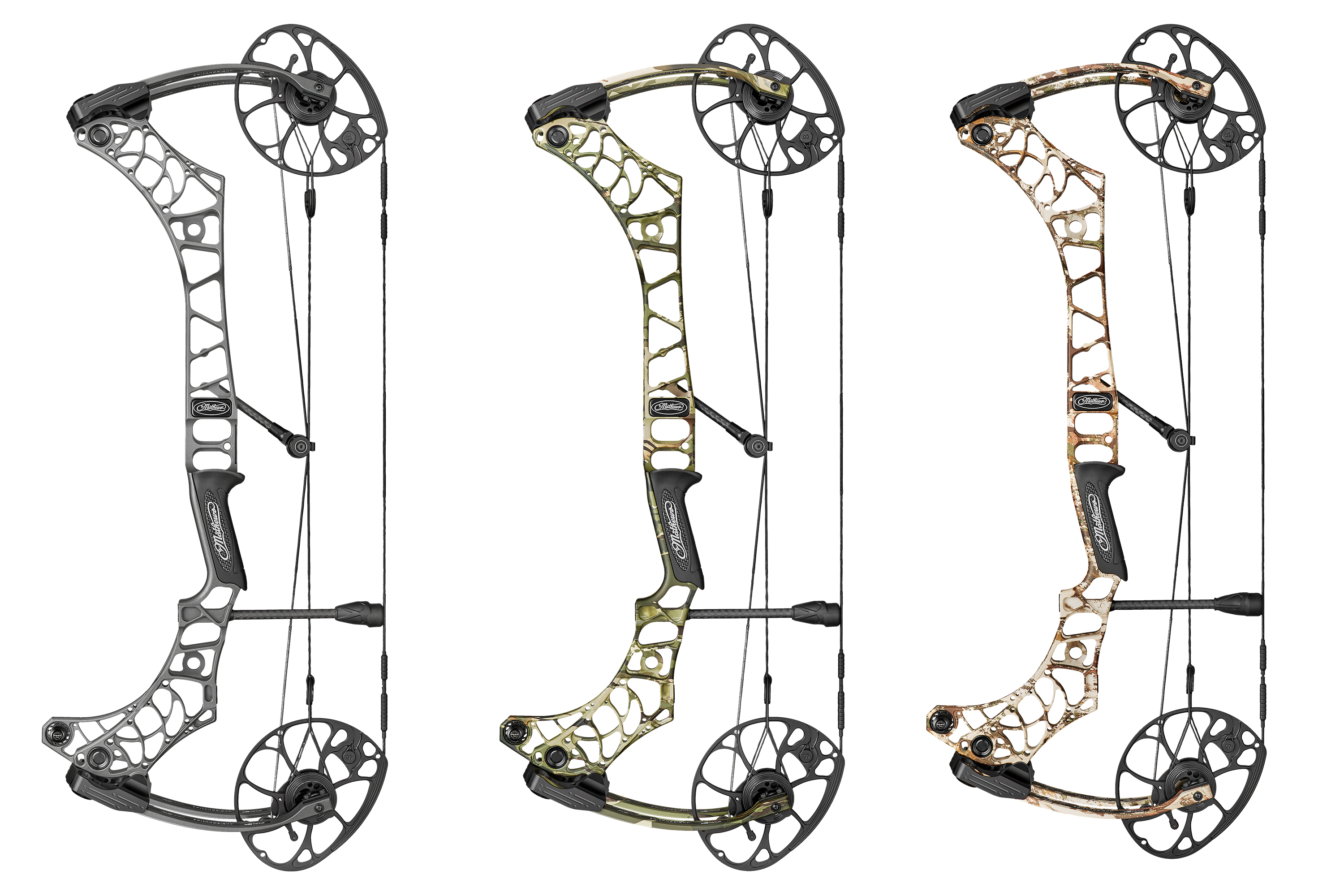 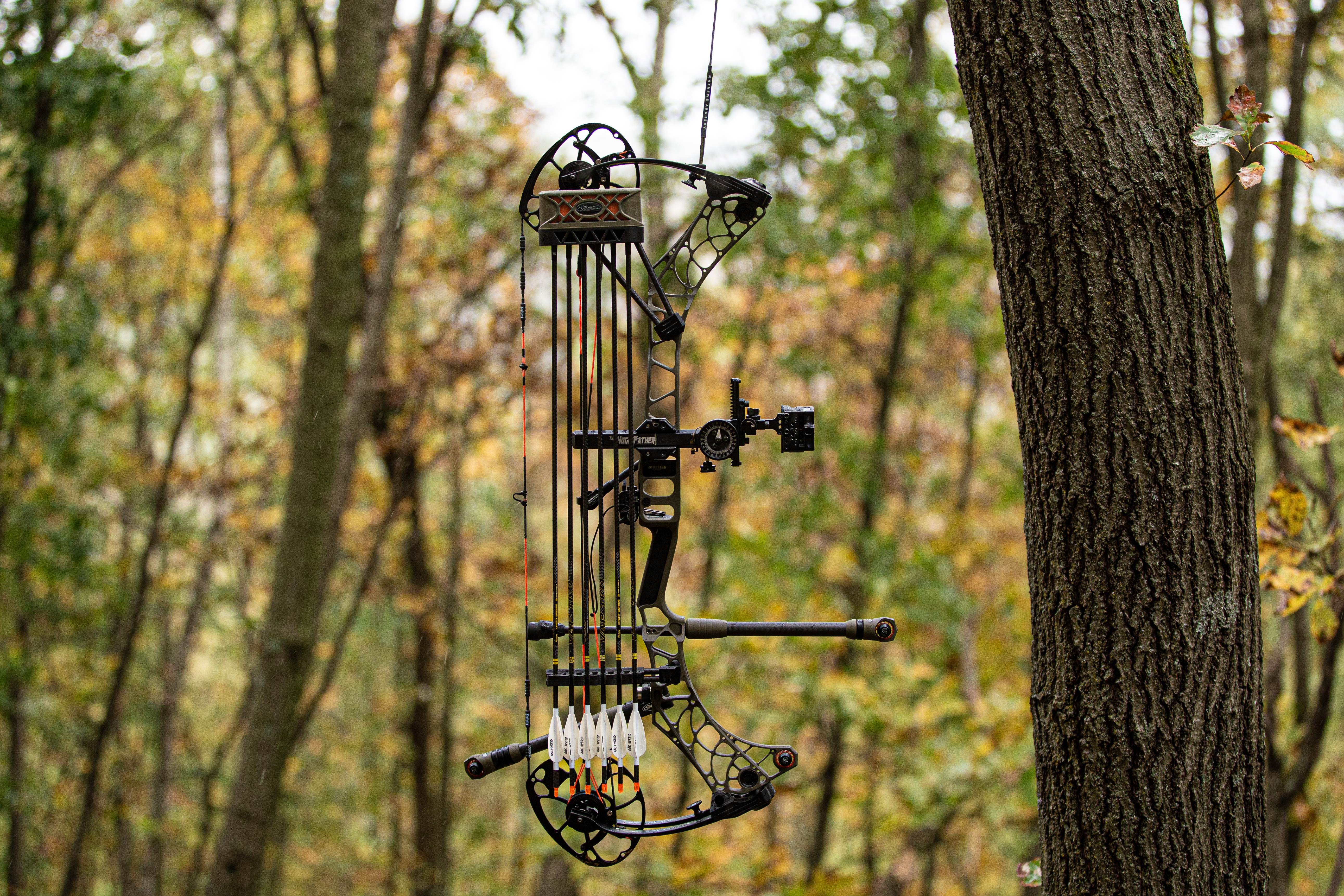 The V3 riser lengths are the same as the VXR models, but now the limbs are deflected further. This new geometry enabled design changes throughout the bow.

For instance, the new Centerguard now comes through the true center of the bow, which the brand says provides optimal cam timing, improved tunability, and greater vane clearance. “For the first time, we have a bow that shoots the arrow out of the center and the cables are centered, meaning your cam timing will be perfect,” said Hayes. 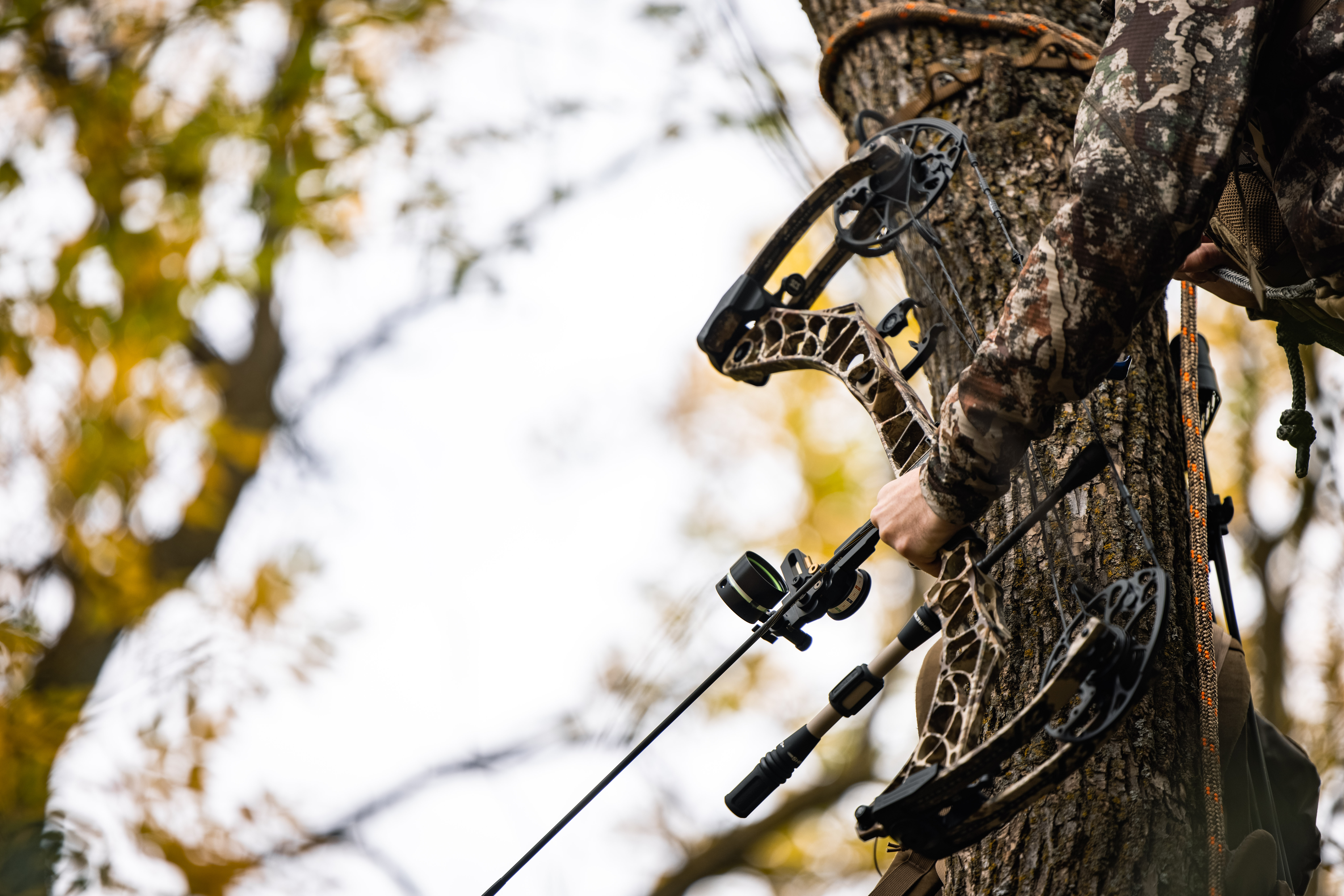 Carrying over into the V3 is the SwitchWeight tech that allows shooters to adjust draw length and draw weight in 5-pound increments from 60- to 75-pound peak weights. Another carryover is the optional Silent Connect System (SCS), which lets you quietly connect a bow sling or tow rope during a hunt. 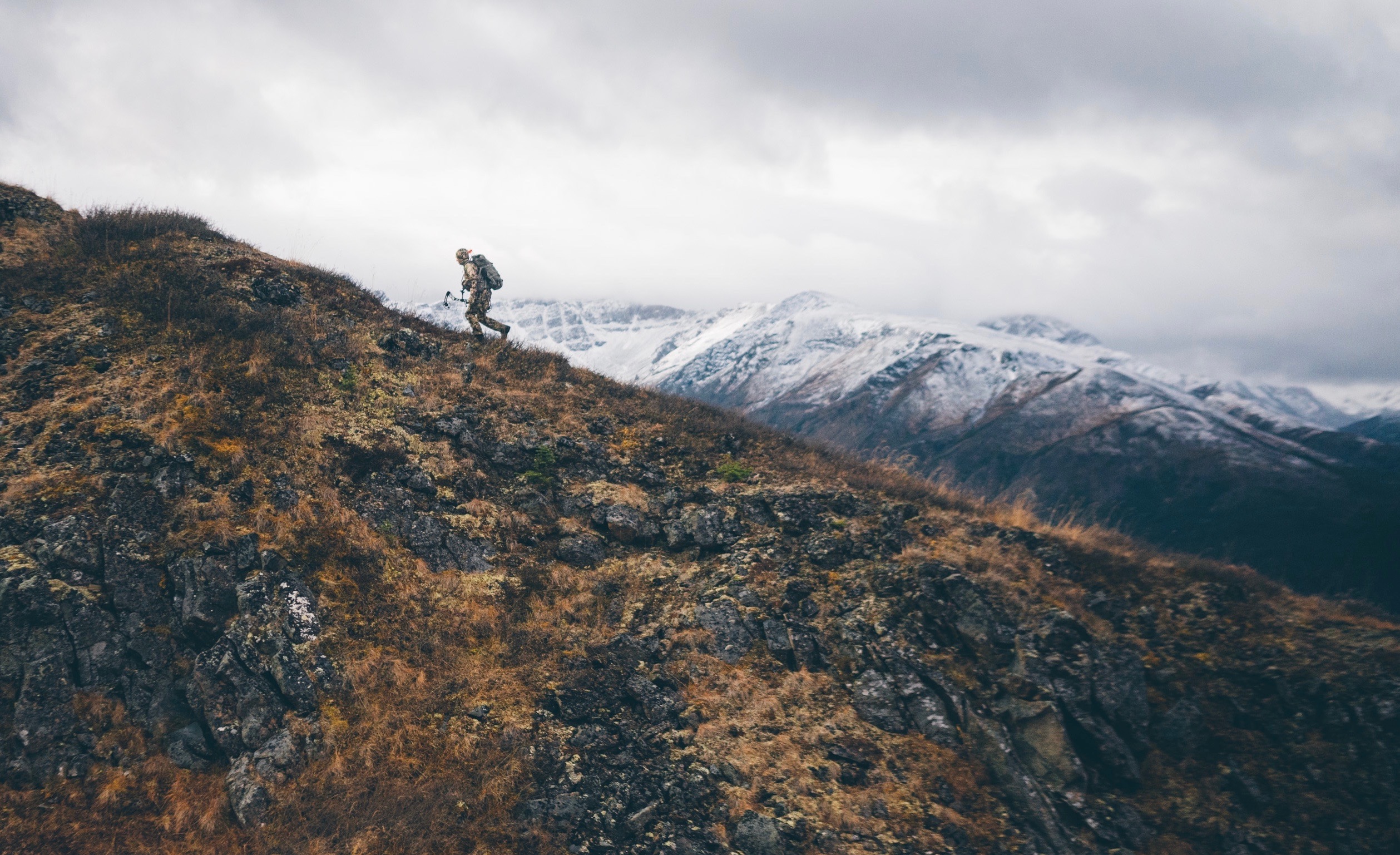 GJ: Can you give us some background on the V3?

MH: We’ve had iterations of a technology that we are really excited about and feel like it’s going to shift the industry. Traditionally, people have in their heads that a long axle-to-axle bow is what you need to be stable. That comes from the target lines (of bows) those are usually long, really stable bows.

What they don’t see actually is it’s really the riser length that’s creating that stability. We build stability into a hunting bow, just like a target bow, in a compact platform … and without sacrificing accuracy. 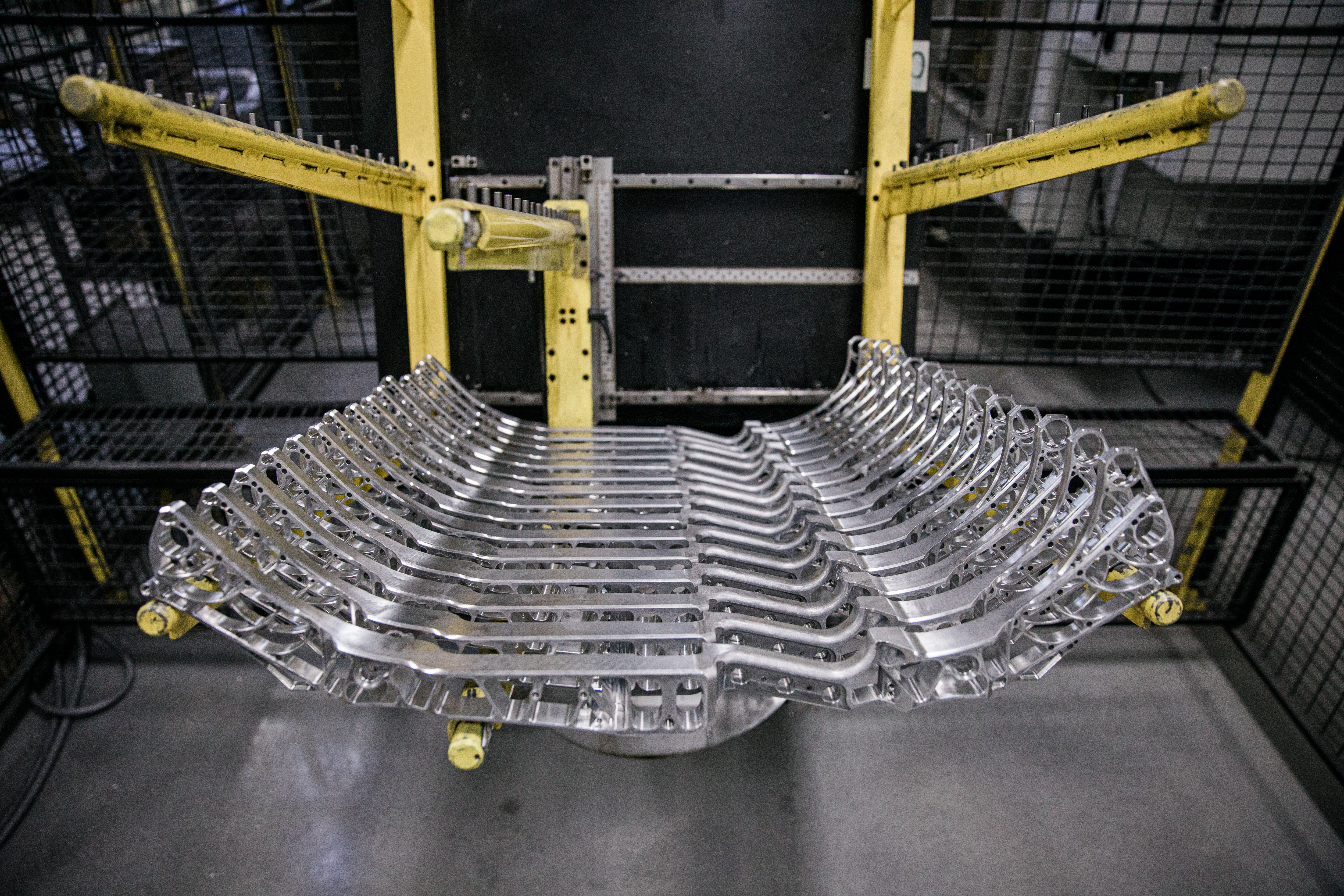 The V3 is a continuation of that long-riser, short axle-to-axle platform. What design challenges did you face to get this point?

There’s a geometry that we have to consider because when you make a longer riser, it gets inherently weaker. We had to stiffen certain sections of that riser so that we don’t sacrifice any of that rigidity that’s crucial to that platform. Beyond the new riser geometry, right in the center, there’s a new roller guard that we inserted in a way that actually gave us a stiffer rise.

and we ended up with something that was much lighter and had better fatigue life even though we were stretching those limbs for further deflection.

That was one of the best victories for the design team this year: to have something to allow this bow to be as good as it is but also last longer than any other platform ever has on our cycle [fatigue] machine.

We do not want to give up the robustness of our product. That is something people rely on in the harshest conditions, and we cannot sacrifice that. We want to make that better and additionally make the performance better. This time, we were able to do both and end up with a lot lighter bow in general [4.29 pounds and 4.5 pounds]. 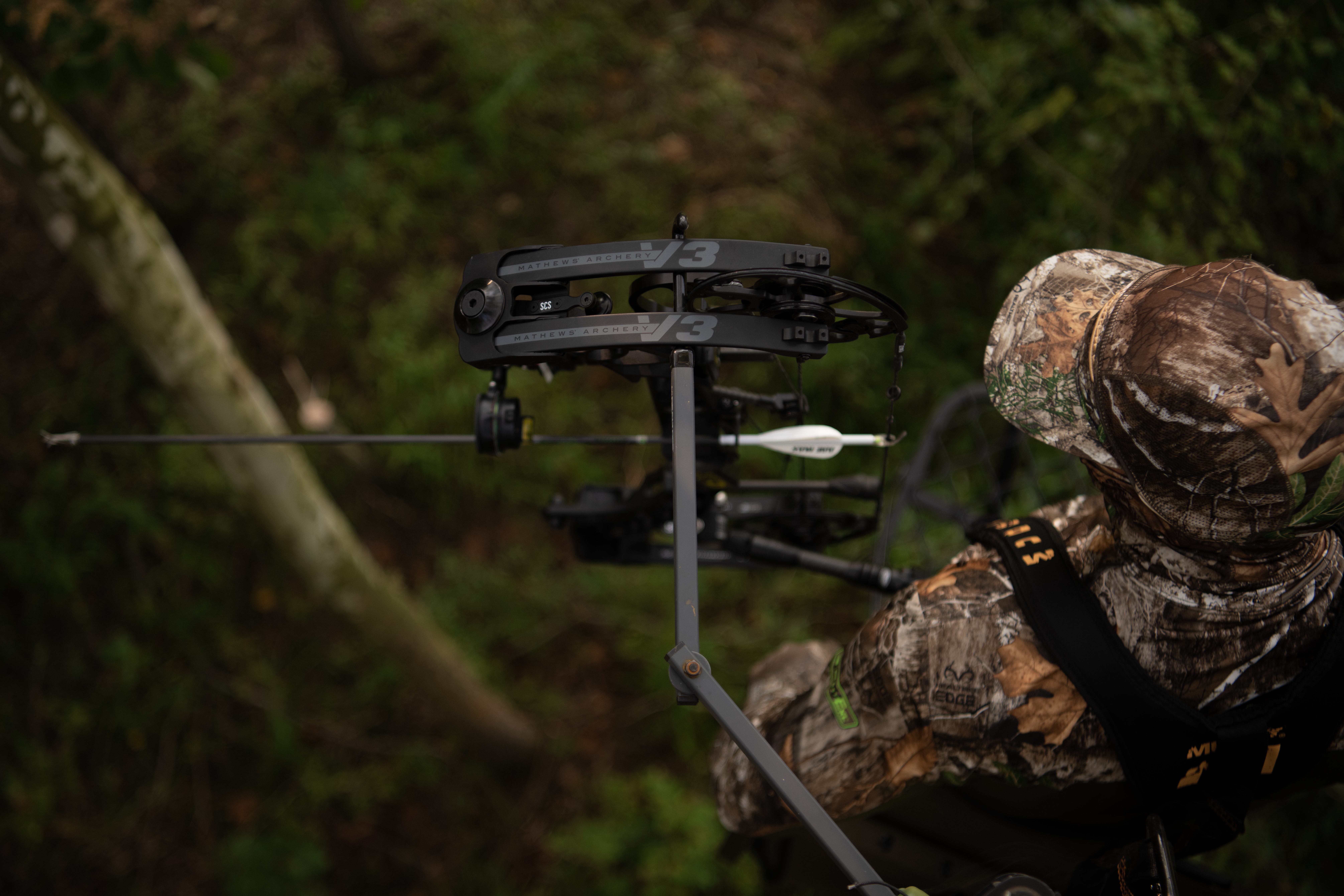 Tell us about the Centerguard and what makes it special in the V3.

Normally the center of the bow is about between the grip and the Berger button. Ours has been perfectly at the Berger button, which means when your arrow launches, it has the same force pushing it on top and bottom.

Now the cables are centered on the bow too. That keeps them the same angle coming out of the cams so that when the cams come around and stop on the cable stops, they’re the same, and your cam timing is perfect.

Now with the new design, we’re able to get right in the center and increase the fletch clearance on the arrow. That’s a big thing. When you put a roller guard or containment system in the middle of the bow, you’re getting in the path of the arrow.

Having a bow you can pull out of the box and shoot a perfectly tuned bullethole is the goal. That, one, creates confidence in the equipment, and, two, it eases the process of setting up a new bow. That start matters a lot to the whole experience. 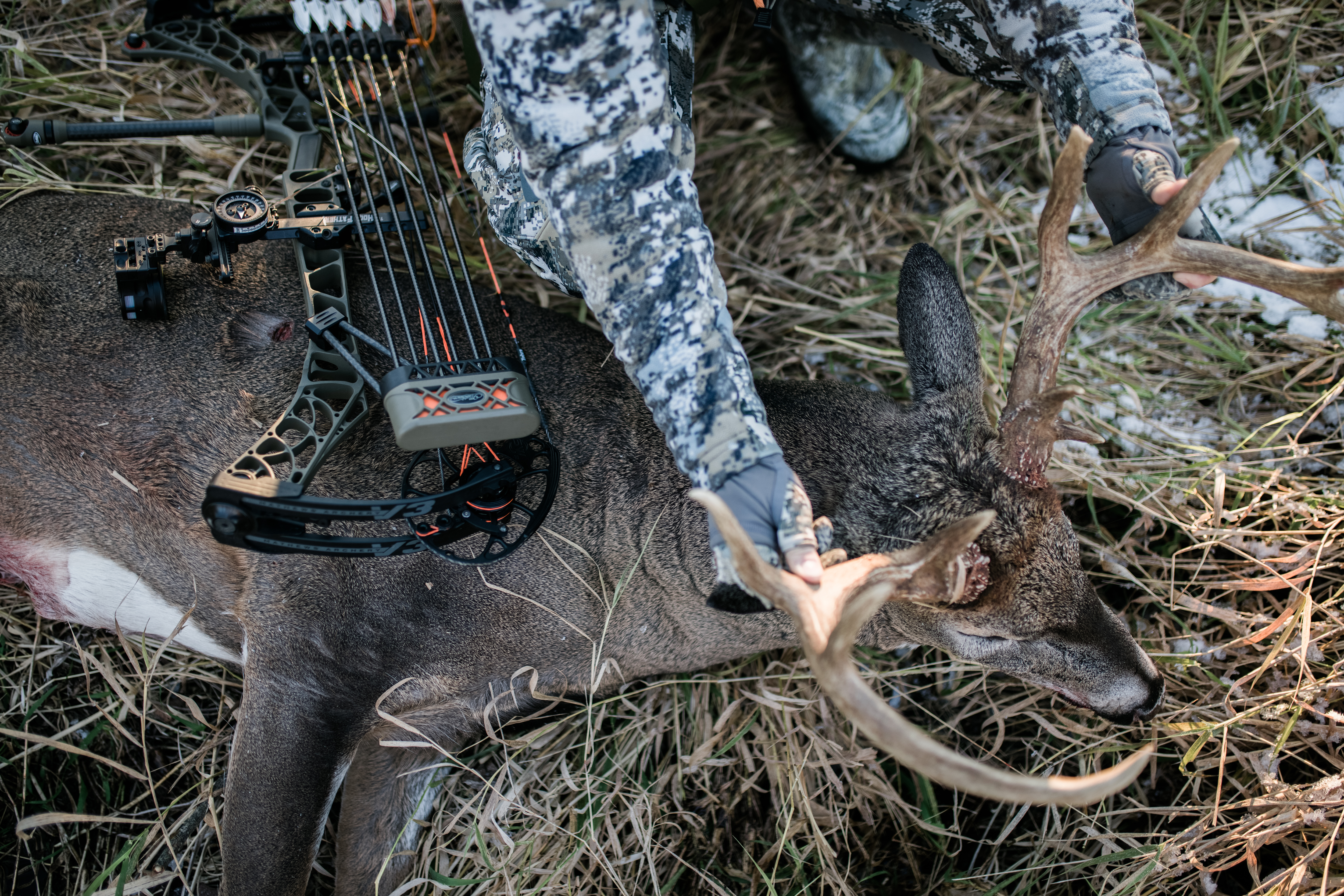 Talk us through the vibration-dampening technology in this bow.

When I talk about vibration, I always start at the efficiency. When you shoot that bow, you want it to be as efficient as possible. We’re fighting tooth and nail for fractions of a percent for efficiency.

What that does on the back end, the lost energy that doesn’t come out on the arrow comes out in the form of sound and vibration. If we can minimize that percentage from the start with our efficiency, we have less to deal with. That’s where Mathews shines.

The goal of the engineer is to always make that system work in the smallest, most condensed platform it can. That’s where this year we came up with the Nano 740, a really small damper that you can find in our stabilizer platform. With the new geometry, we had to fine-tune this damper specific to this model. We used a proprietary elastomer for the 740-grain brass weight that dampens the energy because it’s tuned for the natural frequency of that bow.

Additionally, we took our 3D damping even further. The damper is found lower and further out than we’ve had before. That gives the bow a better balance and makes it more effective. The more that you can energize that damper, the better it’s going to work. The further from your hand, the better it will perform. 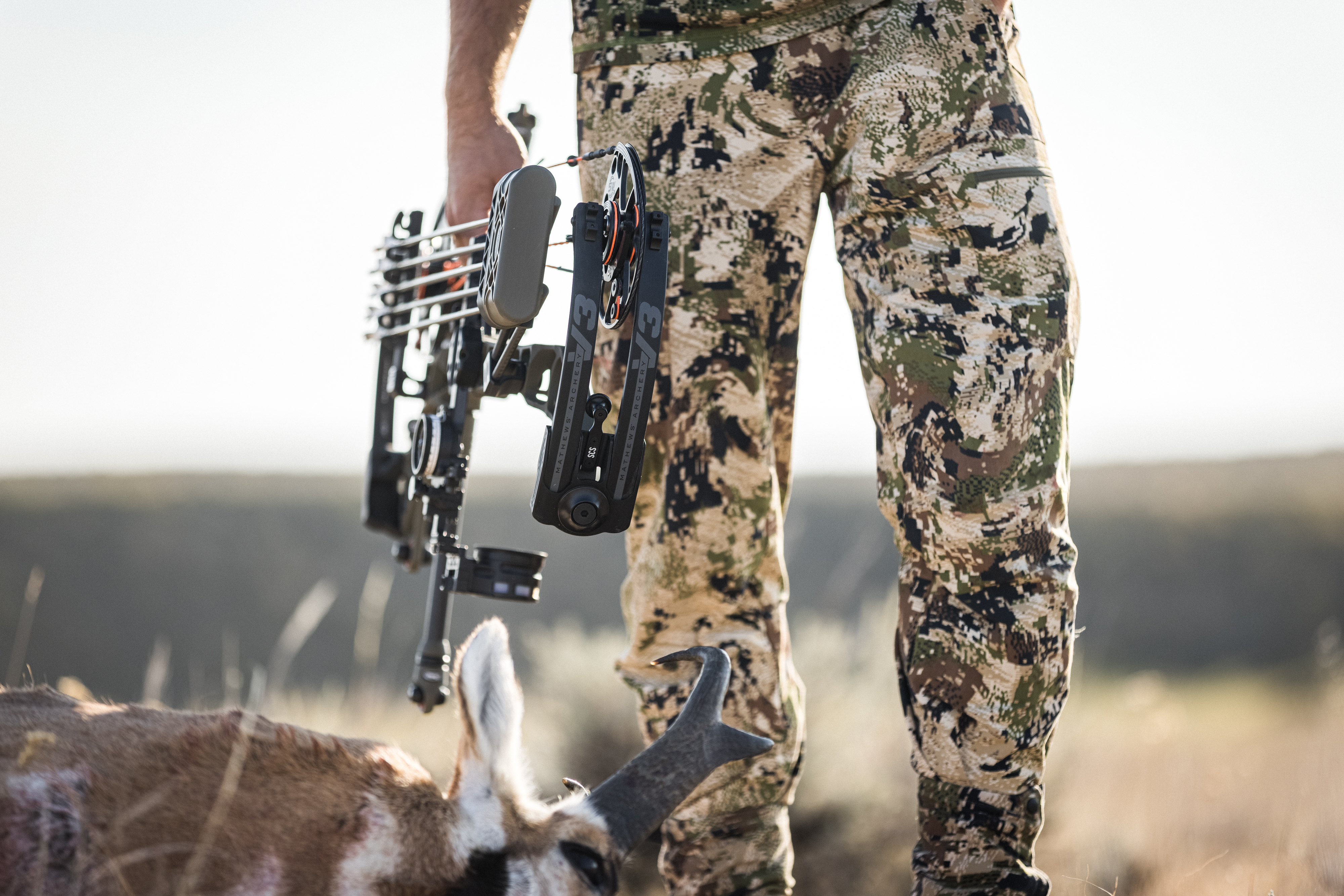 What makes the Mathews SwitchWeight so unique?

The SwitchWeight was introduced 2 years ago and is a system our customers and dealers have fallen in love with because it gives them so much versatility.

Normally, when you change the draw weight is a cumbersome process and changes the tune, so you have to tear apart the whole bow. With SwitchWeight, you just replace four screws and a mod and you can go from 60-, 65-, 70-, to 75-pound draw weights with the mod, and all while keeping the limbs all the way down where the bow will perform at its peak efficiency.

Performance-wise, the mods are programmed perfectly for each draw length. I know guys that draw 26- or 26.5-inch who are always struggling for performance. The individual mods are tuned for each draw length so you get the most out of them. It’s not a rotating mod; those are tuned for 30 inches. When that rotates down to a 26-inch, it really leaves you hanging because you lose a lot of efficiencies. 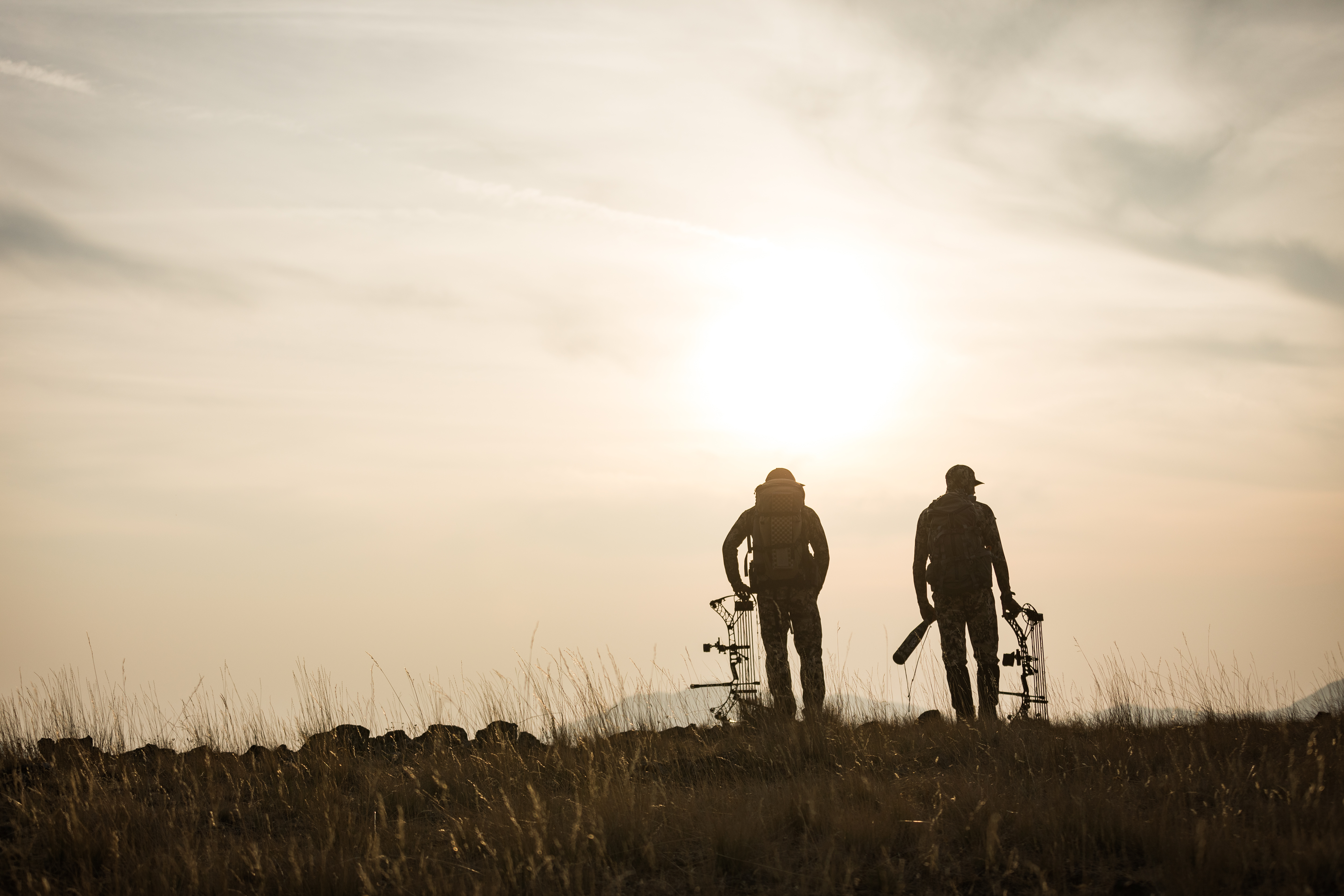 In recent years, Mathews has managed to put more bow into smaller packages. Getting into the nitty-gritty with Mathews engineers proves that you can’t judge a bow by any single design spec.

The new V3 27- and 31-inch models sport the longest riser per axle-to-axle lengths in any Mathews bow, and, as it proudly points out, the riser lengths rival those in its target-shooting bows. 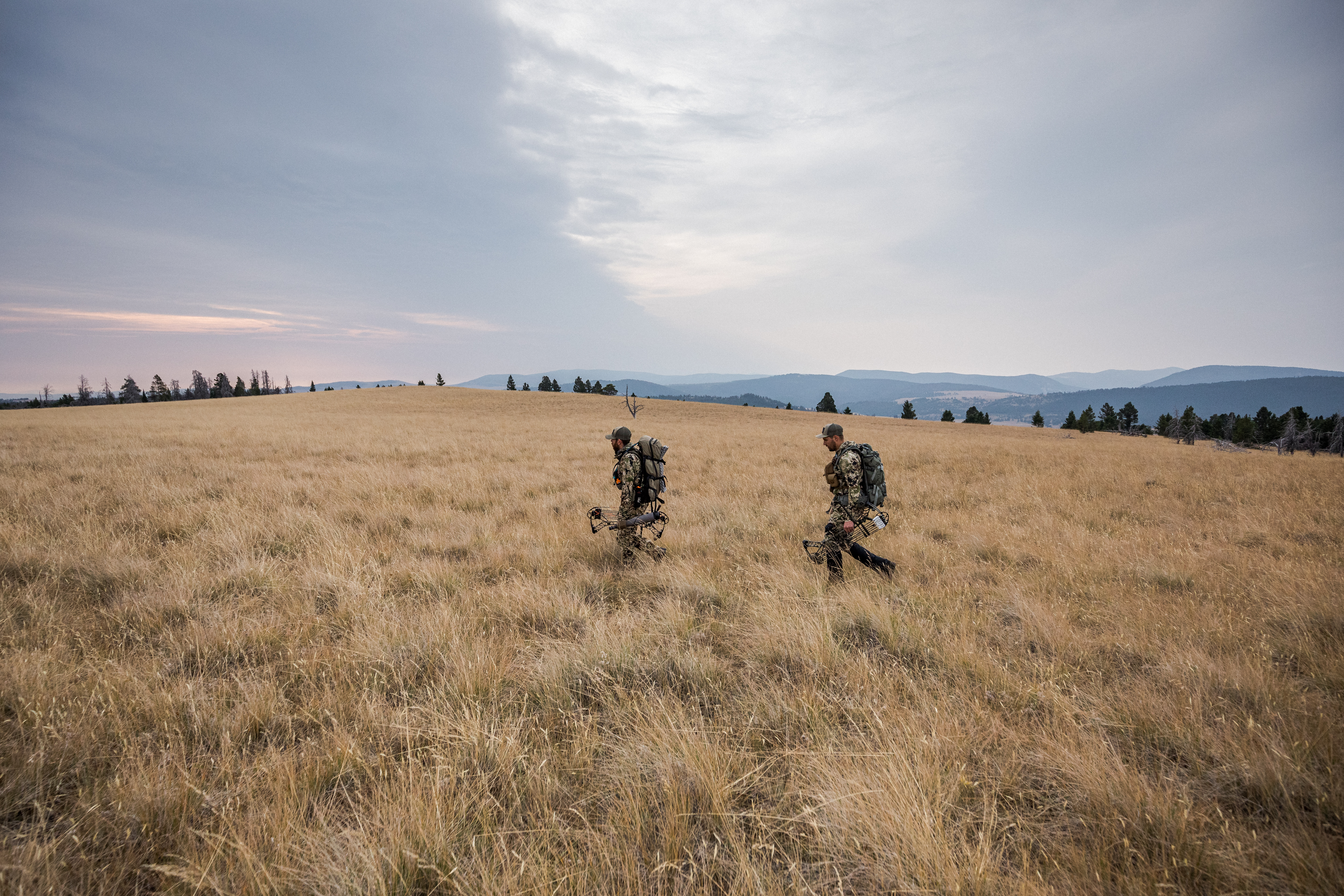 This article is sponsored by Mathews Archery. See the new V3 for yourself here.