Nothing says love like a film tribute to your dog. And 14 years in, Copa the English setter still pulls off an incredible bird hunt.

Perkins has been guiding for over 11 years, and not just fly fishing, but upland bird hunting too. And that means having his pup by his side.

The film stars (you guessed it), 14-year-old Copa, an English setter.

“In her 14 years, Copa has been by the side of Simon Perkins through myriad changes — Montana guide life, a move to Vermont, marriage, children, and more,” the film description reads. “As she nears the end of her life, Simon reflects on how much their relationship has meant to him.”

Grab a box of tissues because this one’s a tearjerker — in a joyful way. 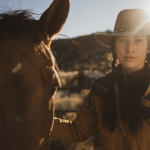 Gillian Larson's short film 'The Thru Rider' is finally here. Watch one woman and her horse ride victorious over the entire Pacific Crest Trail. Read more…