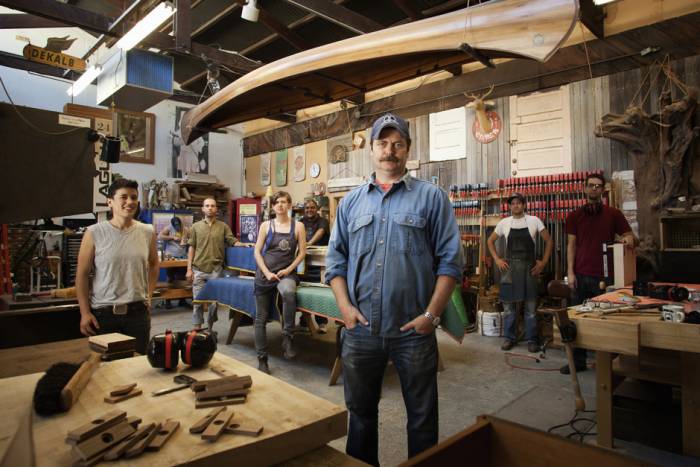 Nick Offerman became the iconic alpha male as TV’s red-meat-loving, cabin-building Ron Swanson. But that wasn’t all act. Offerman’s real-world woodshop is a wonder in itself, complete with tools, handmade canoes, and a pet possum.

Let’s be honest, there aren’t many emails you’d print out and keep. But if you see Nick Offerman’s name on it like I did — yeah, the Nick Offerman — you’re going to look for a frame to hang it.

Best of all, he can build the frame for you. Offerman, renowned archetype of manliness and the man behind Parks And Recreation’s Ron Swanson, is a real-life woodworker. And his L.A. hobbyshop-turned-business, Offerman Woodshop (OWS), is a testament to both the irreverent myth and honest everyman that Offerman represents.

I learned some surprising things about what the shop is up to. And I even got a quick Q&A with Nick and the crew about the fascinating Friday hootenannies known as Ladies’ Nights Offerman hosts (more on that below).

1) Nick’s Father And Brother Help Out

Yes, the Offerman Woodshop is a family affair. Nick’s dad Ric and brother Matt contribute to OWS from Ric’s shop in Minooka, Ill.

Rumor has it around the shop that Ric began the family woodworking tradition when he built Nick a step stool for potty training. For his part, Matt not only keeps up with Nick in the shop, but he also acts. The two even played brothers on TV when Matt portrayed Ron Swanson’s sibling Don Swanson.

The success of OWS is not dependent on Nick’s notoriety. The limited-run, handmade products the shop sells are meticulously crafted and gorgeous. 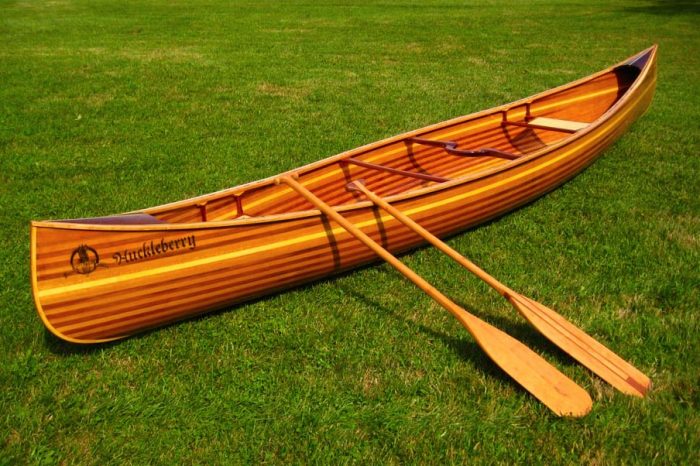 Big-ticket items include a 17-foot cedar canoe (above), a commissioned mahogany pinball table frame, a redwood gazebo, and a “whiskey pong” table with hand-caned net and paddles. 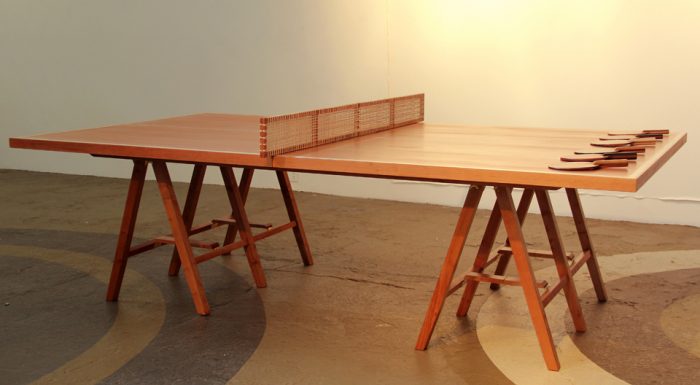 But the shop also churns out more practical housewares you can buy. Pencil-holders (or, “Mistake Stick” holders at the shop), bottle-openers, cutting boards, tables, and of course, there’s a mustache comb. 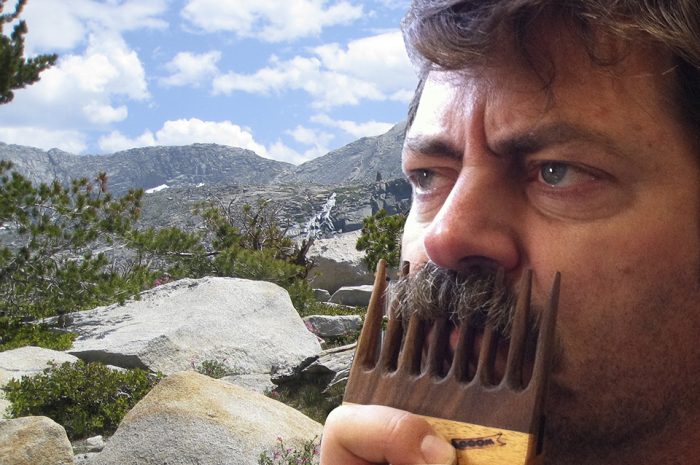 Members of the OWS team, all of whom are skilled woodworkers, often instruct DIY classes in L.A. Check out the OWS events calendar for availability and cost (Note: classes are not held at OWS).

4) Ladies Night Is Every Week

It just wouldn’t be a proper Offerman business if there wasn’t play to go along with all that work. Much to my surprise, a few members of the OWS gang, including the man himself, told me about their weekly work parties. Good news: You can go if you bring donuts (maybe).

GearJunkie: When is “Ladies’ Night?”

Nick Offerman: We call every night “Ladies Night” because the women run the operation, like so many American homes and businesses. And so we men pay fealty to their dominance in an attempt to avoid punishment.

Jane Parrott, woodworker/metalsmith: Every week. Instead of Beer Friday we have “ladies night.” It’s way smarter.

What exactly is Ladies Night?

Matt Offerman: On ladies night, the guys work for 20 percent less. And we teach the guys how to ask for help, listen to others, and multitask.

Josh Salsbury, woodworker: It’s a post-work hangout, with drinking and eating, often gathered around a fire of wood scraps in a Weber grill. 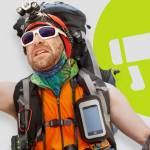 You may know him as Councilman Jeremy Jamm from the show 'Parks and Recreation.' In real life, Jon Glaser is a gear aficionado, and his soon-to-launch TV show proves it. Read more…

How does one get invited?

Nick: All shop employees are invited, but one’s inclusion can be rescinded for a number of indiscretions, including but not limited to: insufficient sweeping, excessive farting (we are each allotted three a day, providing they are three seconds or less), any attempt to play “new country” music on the stereo, or flagrant consumption of green salads.

Jane: Either you work at OWS or you brought us donuts once.

OK, I’ll bring donuts. What other food is there?

What about dress code?

Nick: We value our liberty as Americans, so no, there is no dress code. We wear what we damn please. Although for reasons of appetite, I have been unofficially required to keep my bare “bear torso” hidden from view.

Matty Micucci, woodworker/kazoo-maker: No, not a formal one. But all OWS members will be in uniform: Long pants, sturdy boots, handkerchief in back left pocket, and pocket knife in front right.

Anything else I should bring?