The Packing It Out team has hiked more than half of the Pacific Crest Trail now, meticulously removing each piece of trash found along the way. Their most recent update includes 100 more pounds of trash and trekking through beautiful Sierra mountains. 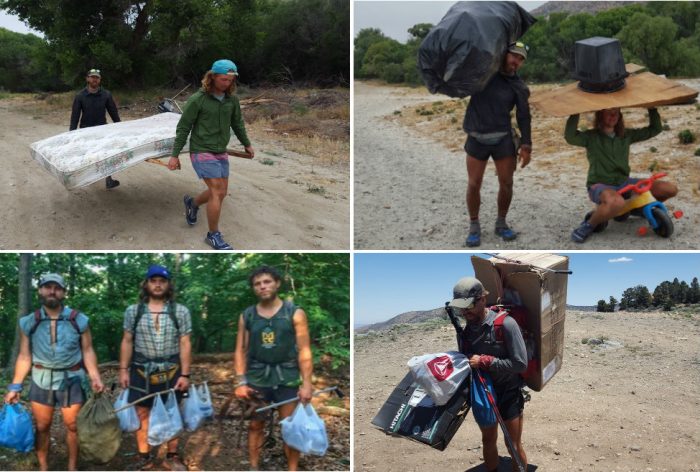 Article written by Seth Orme, a ‘Packing It Out’ founder. Sent from the trail.

This is part of GearJunkie’s ongoing coverage of the Packing It Out project, a two-man initiative to clean up trash from the Pacific Crest Trail. Check out the full Packing It Out page for the full list of stories and info.

We are still here! I repeat, we are still here!! The last couple months on the Pacific Crest Trail have been incredibly dynamic and scenic. We found ourselves wanting to stay in the field longer and longer. When we last checked in, we had hiked over 700 miles of the Pacific Crest Trail and removed 530 pounds of trash along the way. We had just arrived in Kennedy Meadows at the base of the Sierras in northern California, arguably the most challenging section of the PCT.

Since then, we were a part of a “Day In The Life” film with GearJunkie and Wild Confluence Films, hiked all the way through the Sierra mountains, and cleaned up over 100 more pounds of litter from the trail. Let’s get into some more details.

Day In The Life

Just before arriving in Kennedy Meadows, we had the opportunity to meet up with the guys at Wild Confluence films. Luke Arisman and Colin Kantola create films and documentaries that showcase our planet’s beautiful landscapes and inspire others to get more involved with their wild places. Working with these two was a real treat. I haven’t laughed that much in a long time.

After hiking, filming, and cleaning a 19-mile section north of Walker Pass, Spice and I continued north to Kennedy Meadows where we reconnected with Colin and Luke for some finishing shots and an interview. It didn’t take long for these guys to have an awesome Day In The Life piece put together. We can’t thank Wild Confluence, GearJunkie, or REI enough for sharing our story!

Video: ‘Packing It Out’ Cleans the Pacific Crest Trail

This summer, two young Pacific Crest Trail thru-hikers are picking up trash as they go, up to 1,000 pounds of cleared litter the goal during the multi-month trip. Read more…

After leaving Kennedy Meadows, we officially started our ascent into the high country. This section of the PCT gives hikers a proper taste of wilderness. With over seven days of food, extra warm layers, and tools for snow travel packed, we quickly found ourselves fully immersed in the backcountry with no desire to leave. Long ascents paired with equally long descents, canyons, and nestled rivers inspired a continual sense of wonder and rejuvenation.

Once hikers get deep into the Sierras, the Pacific Crest Trail pairs with the John Muir Trail. At this point, you can continue hiking north along the JMT/ PCT or you can take an extra day to spur off and attempt a summit of the southern terminus of the JMT and the highest point in the contiguous United States, Mt. Whitney.

We opted to take an additional day to go for a summit attempt of Whitney. A 3:00 a.m. alpine start kicked off a successful summit attempt. At 14,505 feet, Whitney was the coldest and highest we’ve been on the trail to date. Being cold isn’t all bad when the views are this beautiful.

The Range Of Light

Living and walking through the land John Muir fought so hard to protect gave us a real understanding of why he dedicated his life to this incredible mountain range. Hiking through places like Kings Canyon National Park and Yosemite National Park along the PCT gave us some of the most beautiful and rich experiences we’ve ever had.

While pictures can give viewers a preview of a place, they fail to stimulate all of the other senses these areas activate. Only being in the Range of Light, Muir’s famous description of the high Sierras, can give you the smells, sounds, and tastes these mountains have to offer.

Since leaving the desert, the PCT has been noticeably cleaner. We believe the remoteness of this section, paired with more inspired hikers on the trail, has played a big role in its cleanliness. For the first time since beginning Packing It Out we had days where we literally saw no trash. Those were wonderful days.

From my experience, fewer access points along a trail often lead to less trash; while more access leads to more trash. This was seen often during last year’s Appalachian Trail clean-up and it was even more apparent when we helped clean the beaches of Lake Tahoe after the 4th of July.

Throughout the Sierras, the number of trail access points were more limited. This resulted in less day-user trash, but what trash we did find had to be carried much farther to be disposed of. At one point in Kings Canyon, we found ourselves carrying a six-pound pair of leather boots for over 100 miles. Like any piece of trash, it’s not a matter of how far it had to be carried; it’s a matter of removing it so our wild places can retain their inspirational beauty.

Another reason I think we’ve been finding less trash is because our mission to inspire others is starting to take hold. On over a dozen occasions now, Paul and I have listened to other hikers tell us they have been picking up trash as they hike. Hearing this from fellow travelers is absolutely amazing. We have received emails from folks who showcase their trash finds from other trails.

A great example of this is Samuel “Nightmare” Glenn, who is currently hiking the Colorado Trail. He met us last year in New Hampshire during his Southbound hike of the Appalachian Trail. Sam recently sent us this picture from the Colorado Trail. He has removed glass bottles, rotten clothing, even a random motorcycle helmet from the trail! A huge thanks to Nightmare for helping us keep our wild places clean.

Well, now that we are pretty much all caught up, I’ll finish this update with a quick download on where we are now and what we have going on in the coming weeks.

We are currently in Mt. Shasta, Calif., trail mile 1,499, and have removed over 620 pounds of trash from the trail. If you just checked where Shasta is on the map you’ll notice that we are really close to Oregon. So close we can almost smell it! But making it to Oregon will have to wait.

Paul and I recently embarked on a short side journey to Salt Lake City for the Summer Outdoor Retailer trade show, where we presented our story at the Granite Gear booth. Now that the show is over, we hope to continue moving north from Mt. Shasta at a relatively quick pace in order to make it to Canada before the cold of winter sneaks in.

With a number of speaking engagements coming up and plenty of miles yet to hike, we will be nice and busy during the coming weeks. We hope to see some of you on the trail. Until next time, farewell.

–Follow the crew on our ‘Packing It Out’ page. To date, the duo has hiked 1,499+ miles from the U.S./Mexico border to Mt. Shasta, Calif. Connect with Paul and Seth on Instagram, Twitter, and their blog.

Up Next: Beyond The Gear: 9 Questions With Eric Larsen