Synthetic base layers and insulating tops have some distinct advantages over other fabrics, mostly being that they dry the fastest. But one major disadvantage compared with wool is that synthetics tend to smell bad, fast.

Over the years, all kinds of substances, from silver particles to activated carbon, have been added to synthetics in hopes of reducing bacterial growth and the resulting pungent odor.

One of the latest entries is Polygiene, a silver chloride based ingredient brand that apparel manufacturers add at the factory. From our testing, it works (see our first Polygiene test from 2014). Here, we test the Polygiene-treated Patagonia R1 Hoody.

The Search For A Non-Stink Synthetic Base Layer 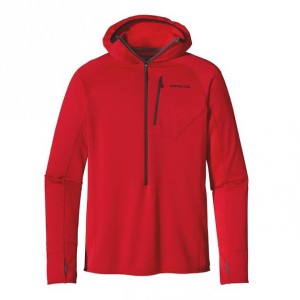 I’ve been wearing synthetic base layers for over a decade – since I ran collegiate cross-country and track in Minnesota, and the team was sentenced to six months or so of winter running.

This was near the start of Under Armour’s rise to prominence; the skin-tight, heavy, polyester/nylon/spandex blend was the base layer du jour. The result was that, for almost a decade, my closet has stunk.

Since I don’t have a separate room to store my running clothes – and because nose blindness can only do so much – I’ve been paying keen attention the last few years to innovations in base layer technology claiming to provide next-to-skin warmth and wicking without the funk.

Patagonia’s R1 base layer (which comes in hoody, hoodless pullover, and jacket form) isn’t new by any stretch. The form-fitting layer – tight enough to work as a base, loose enough to work on top for warmer, windless conditions – has been part of the brand’s lineup for over 15 years. It’s made from a warm, breathable, stretchable Polartec Powergrid fabric (made from recycled polyester). The R1’s tight-fitting hood, subtle pockets, and thumbholes have made this a mainstay for both stationary and aerobic insulation.

But so what? This is old news, right? Hardly worthy of a review…

There’s a twist. The new R1 is treated with Polygiene. This permanent application of silver chloride is designed to prevent the growth of fungi and bacteria residual from your sweat – and the funk that usually comes with it. Silver anti-funk treatments aren’t new, but this is a new take on a classic, good-as-ever piece.

I definitely needed to stretch the limits of the treatment.

I wore the R1 in every conceivable situation for about three weeks. It accompanied me on a weeklong stretch in the Utah backcountry, where I didn’t shower once, and I only took it off twice.

The R1 served underneath a down midlayer and waterproof shell at camp or on the side of a mountain. The hoody was a top layer in warmer climes; sometimes over another synthetic base layer.

All of this was to see if the R1’s armpit freshness would bend and ultimately break.

A Versatile But High-functioning Piece

First off, no surprises here – the R1 performed well in its multiple roles. The Polartec was warm enough as a base layer at our sub-freezing campsite, but breathable enough to wear at room temperature without overheating. In sunny, windless conditions, it was my top layer on a snowy mountain climb and descent in Little Cottonwood Canyon. The hood served perfectly well in place of a light hat, or when that wasn’t enough to fend off some wind. It also acted as a lightweight semi-jacket when the temperature rose above 40 degrees in Minneapolis, and I didn’t take it off when I came inside to write this very review.

It Doesn’t Stink (And Lives Up To The Hype)

More pertinently – this was the very reason I was testing the R1, which we already knew was a great, versatile piece of clothing – the Polygiene seems just about bomb-proof. I’ve yet to wash the R1 Hoody after wearing it constantly for most of three weeks. After the absolutely thrashing it took in the backcountry it came out unscathed, which is more than I can say for most of my other layers too gross to leave festering in my laundry basket.

As a bonus, it’s looks great. I even wore it to visit several accounts in my day job as a tech rep for a shoe brand, and didn’t feel the least bit unprofessional.

A Synthetic Layer That You’ll Want To Keep

Merino is gaining traction, but there will always be a demand for the heavy-duty engineering you can only get with synthetics; the R1’s performance in versatile conditions is an example of why. But the one major drawback to synthetics – the unshakable, insufferable remnants of an active human – may have been nullified with the addition of the Polygiene treatment.

Will it be synthetics’ last stand, or their next major move to dominate the layering game? We’ll see. In the meantime, I love this top.

Up Next: In-Depth Review: Patagonia Merino Air Base Layer