POC Sports releases a fully-featured trail and enduro riding helmet that holds safety above all else. We tested the helmet over six weeks, riding tight and rocky singletrack in the Texas Hill Country.

Since its inception in 2004, POC Sports has had a reputation for upholding the highest standards of safety is all its products. This spring, POC released the Tectal Race SPIN helmet. It’s aimed at some of the most potentially hazardous sports — aggressive trail and enduro mountain biking.

In short: The POC Sports Tectal Race SPIN holds rider safety above all other features. It may not be the lightest, most ventilated, or best-looking helmet available. But one would be hard pressed to find a safer option. 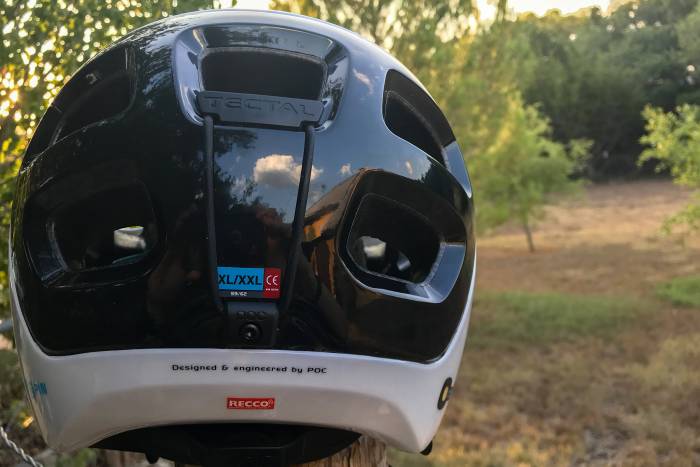 Based in Sweden, POC says its mission is to “do the best we can to possibly save lives and to reduce the consequences of accidents for gravity sports athletes and cyclists.” With the Tectal SPIN, that credo shines through with a number of specific safety designs. 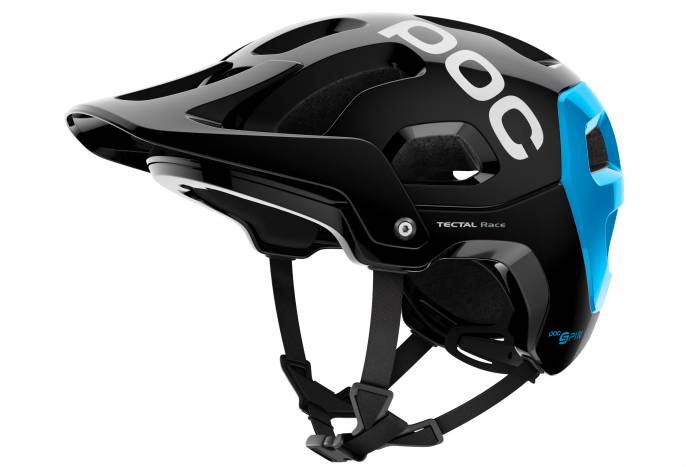 I immediately took note of the pride POC takes in product build quality. The Tectal Race SPIN oozes excellence in materials and construction, even more so upon close inspection.

Every edge, surface, pad, and strap are as they should be: no uneven gaps, no visible adhesive — everything symmetrical, lined up, and smooth. The unibody shell is the most rigid outer skin of any bicycle helmet in my collection and covers the bottom edge completely. Even the finish, decals, metal visor screws, and goggle strap retainer hardware are superior to all my other helmets.

Surprisingly, this build quality and safety feature set don’t pose the weight penalty I’d expect for a helmet of similar coverage and amenities. The Tectal Race SPIN has a verified weight of 14.6 ounces for size XL/XXL. And it’s comparable to trail/enduro riding models that have similar head coverage.

There are lighter “XC Race” models, but they often lack the occipital and temporal protection of trail- and enduro-based designs. 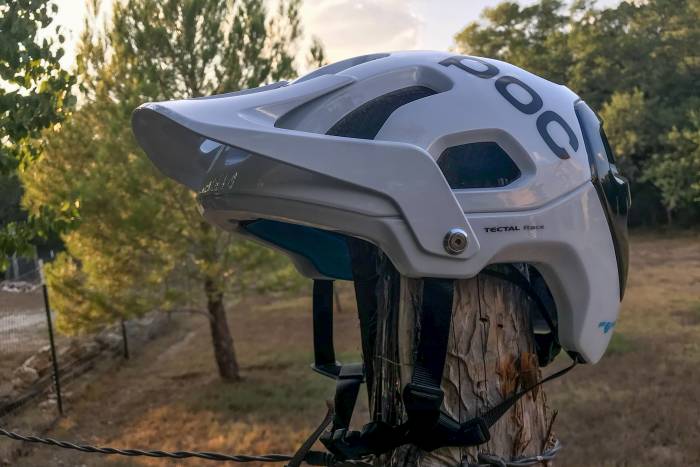 The Tectal Race SPIN fit my oval-shaped head well and proved stable during aggressive riding. Its straps employ a plastic yoke that made it easy to keep them out of the way directly under the ears. And the adjustment didn’t move for the duration of the test. The rear retention strap has three height positions, and the tension knob manipulated easily with full-finger MTB gloves.

The visor’s height wasn’t adjustable on the fly, as its small retention screw resides deep in a vent. But it does have a wide range of vertical positioning. Like other helmets, when adjusted correctly, the POC remained stable even with the chin strap unbuckled.

In addition, the Tectal Race SPIN provided more head coverage than any other helmet I have used, and its temporal and occipital zones reach low (particularly the latter). I used a variety of riding glasses during testing and never experienced issues with fit or interference.

The Texas Hill Country is mercilessly hot during the summers, so breathability is of prime importance. At trail riding speeds, the Tectal Race SPIN’s 17 vents allowed enough airflow to prevent me from overheating in temperatures in the mid-90s Fahrenheit. That’s admirable, especially for a helmet with such comprehensive head coverage.

But by no means was it the most-free flowing helmet I’ve tried. This wasn’t altogether bad, as larger or more numerable vents can decrease structural integrity and allow low branches to penetrate through the openings, a common occurrence on my local cedar-choked trails.

The POC Tectal Race SPIN is slightly bulkier than my other MTB helmets, similar to my POC road helmet. Again, this may be a concession for improved safety. I didn’t notice the larger dimensions in use. But on a trail I know well, I once bumped the top/front of the helmet on a low branch that I usually duck under without issue. 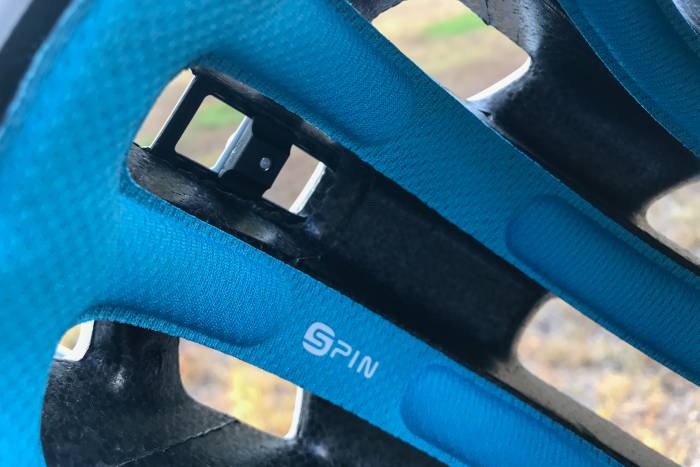 Unlike the usual MIPS inserts, the silicone SPIN pads give in every direction — not just parallel with the helmet’s inner liner — and are soft to the touch. Thus, the SPIN pads provided a cushioning effect in addition to their off-angle energy-absorbing function.

I have a full head of hair, but I imagine this would be even more noticeable to bald riders. Plus, the SPIN pads didn’t eat up space or block airflow to the interior of the helmet.

True to claims, the unibody shell thwarted any damage other than nearly unnoticeable scratches in the clear coat. I did feel the SPIN pads absorb a little of the direct impact and also a bit of the rearward force. I have been somewhat skeptical of MIPS features, on occasion claiming a sweaty head of hair works as a built-in MIPS. But I did perceive some oblique SPIN pad deformation in this test.

The POC Tectal Race SPIN is a stable and comfortable helmet with proper venting and outstanding build quality. And it offers excellent head coverage and impressive safety features to boot.

There are indeed lighter and more ventilated models. But if safety is the priority, this helmet is a terrific choice for aggressive XC, trail, and enduro riding. The only drawback is the relatively high MSRP of $220, but it’s hard to put a price on your noggin’s well-being.