Everyone associates tick season with Lyme disease risk. Yet a potentially fatal virus spread by ticks is starting to make headlines. Here’s what you need to know about the ‘POW’ virus.

Google “POW virus” and you might think there’s an epidemic worthy of a national state of emergency.

To be sure, there is cause for alarm. Powassan (POW) virus is fatal in 10-15 percent of cases. There’s no known treatment, and half of those who contract it suffer permanent brain damage.

But last fall, after a newborn baby in Connecticut tested positive for POW, believed to be caused by an errant tick carried by his dad following a hunting trip, news of the virus has ramped up. And so have fears of the threat it poses.

Take the recent news as you will, but the number of diagnoses varies from year to year. From 2006 to 2015, 77 people contracted the disease, resulting in eight deaths.

The POW virus received its name from the town in Ontario where it was first diagnosed in 1958. That case involved a young boy who died from then-unspecified brain inflammation.

Now 60 years since, doctors and researchers have identified the blacklegged tick, commonly known as the deer tick, as a carrier of the virus. Infection by POW virus is serious.

The virus can cause encephalitis (swelling in the brain) and meningitis (inflammation of brain and spinal cord membranes). Both can be fatal.

According to a CNN interview with Dr. Jennifer Lyons, chief of the Division of Neurological Infections and Inflammatory Diseases at Brigham and Women’s Hospital in Boston, prognosis with POW is grim.

“About 15-percent of patients who are infected and have symptoms are not going survive,” she said. “Of the survivors, at least 50-percent will have long-term neurological damage that is not going to resolve.”

How Dangerous Is Powassan?

POW is so frightening because there is no real treatment. According to the Center for Disease Control website, patients simply receive “respiratory support and intravenous fluids.” In other words, water and air. 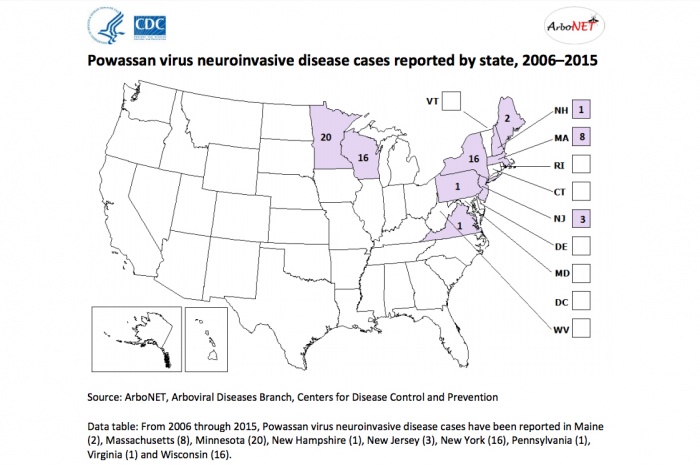 But while headlines proclaim “a surge of a deadly tick-borne virus this summer,” there are some hard facts that everyone — especially outdoor recreationists — should remember.

For starters, it’s very rare. In the last 10 years, 8 people died from POW. By comparison, you are about 40 times more likely to die by lightning strike.

And the surge is anything but clearcut. Better testing protocols and enhanced awareness of the dangers ticks pose make diagnoses more common, not necessarily the occurrence.

Plus, according to CDC data, infection rates vary substantially year to year. One year there’s six cases, then12, then five.

Just like Lyme, POW virus is better defended against with prevention than it is treated. And, like Lyme, it’s mostly a threat for those living in the Great Lakes region and in New England, both hotspots for blacklegged ticks.

Below are some quick tips for tick season. You can also check out our explainer on ticks and lyme disease.

Environmental factors like climate change and reforestation suggest tick populations will rise. And that may mean heightened risk for POW virus. But the most important point is to be aware and protected when you recreate outside.

Up Next: Utah Unveils ‘Search And Rescue Card’