Somewhere in the snowy mountains of Transylvania, there’s a dirty, lost Leatherman lying on the ground. You’d recognize it by the shiny metal stained with blood from its last use when it helped save a man’s life.

Ken Jones was panting and bruised as his insides coursed with adrenaline. He had just escaped death, evading an avalanche by running through a thick mountain forest.

The thunderous crush of snow that had just swept past him began to fade into the forests below. Moments before, a titanic cascade of snow and ice broke free and hurtled toward him.

“The initial shock had left me, but a sense of impending disaster remained,” Jones wrote in his book chronicling the incident.

His fear proved horribly keen as a second snowslide roared down, swallowed him up, and threw him off the mountain. That avalanche crushed Jones’ body and scattered his supplies. He was left with almost nothing to help him survive except his will and a single tool.

In 2003, Jones set off solo to bag the Moldoveanu Peak in Transylvania. A former English Special Forces soldier, Jones—then 26—was capable and confident.

“Between my military experience and mountaineering training, I was accustomed to being uncomfortable,” Jones said. With assuredness and the Leatherman Wave he “always had in my pocket,” Jones left to conquer the highest peak in Romania. 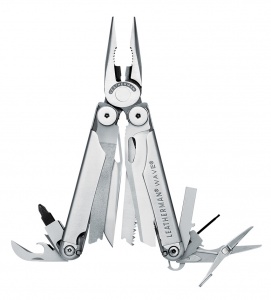 He wouldn’t return to civilization for four days.

When the second avalanche struck Jones, it swept him off the mountain and dumped him over a cliff. He shattered his pelvis and part of his femur. Stranded on the mountainside, Jones pushed through excruciating pain to literally wriggle his way toward help.

It took days. Hypothermia began to set in.

“I looked down at my foot, which was throbbing,” he recalled. “It was comically large, and I was sure without circulation gangrene would set in.”

As Jones recounted the ordeal, he said the injury to his leg basically froze any movement in his hip. So he couldn’t move his leg to get the shoe off. Numb hands prevented him from undoing the laces.

With all his supplies dumped in the fall, Jones fished in his pockets for something that might help. Though cold, his hands quickly identified the Wave still there. He used the pliers to pull the laces free.

But his foot had swollen so large the boot remained stuck. So Jones flipped out the blade, slit the heel of his boot, and managed to yank it off against a tree root.

His near-frozen hands also proved incapable of undoing the buttons on the pockets that held his small food rations. So again he tore off the buttons using the Leatherman to maintain what little energy he could.

After a brief sleep, Jones levered his foot back into the boot with the pliers and crawled to a stream. Cold and thirsty for clean water, he thought of how to retrieve enough water to keep him going. Again, he pulled the laces from his boot with the pliers. This time, he blew warm air and dexterity into his frigid hands—enough to tie a loop around the nose of a small plastic bottle he had in his pocket.

With some trial and error, he managed to cast the bottle into the stream and catch enough water to continue on. As the days wore on and his energy dwindled, Jones cast off everything that wasn’t essential.

For seven agonizing miles, Ken Jones pulled himself along. He eventually reached a small town, where he was rushed to a hospital. Multiple surgeries tended to his shattered pelvis and broken femur. And doctors had to remove most of his stomach because the ordeal had left him with life-threatening ulcers.

Though doctors gave him little chance of survival, and even less chance to walk again, he beat the odds. Jones runs and bikes to this day. He also met with Tim Leatherman this summer, who shook his hand and gave him a shiny new Leatherman.

“Actually, I’ve got a stack of them at home,” Jones told us. “I’ve always got a Raptor or a Wave in my pocket.”

But somewhere, buried in snow, that life-saving Leatherman remains as a testament to Jones’ incredible Tool Tale.