After 60 days on the road, from California to Georgia, we watch in awe as Adam Kimble takes his final steps across the continent and into the Atlantic Ocean. It’d been a long, strange trip to get here. 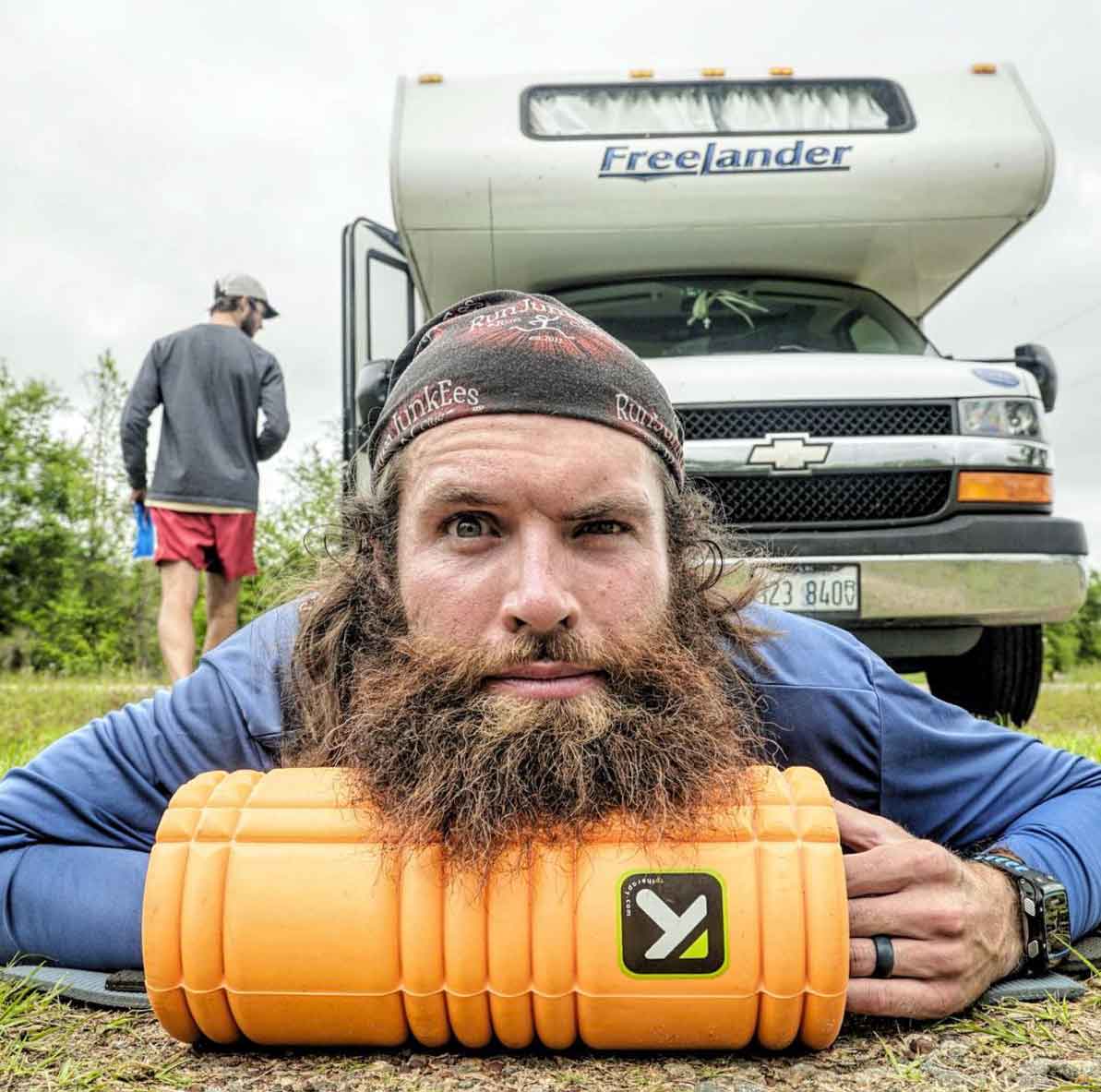 It all started in Vietnam. My husband and I, traveling abroad, met a couple, and a bond was born. Adam Kimble, an ultra-runner, and his wife Karen, became our fast friends overseas, and we soon dreamed up a scheme to keep the adventure going back home.

So it was in February that we found ourselves in California putting our entire lives on hold. We’d crew for Adam, and he’d run — up to 75 miles a day, for weeks on end — in pursuit of a world record.

A beard, a T-shirt, running shoes, and a grin, Adam Kimble was a real-life ‘Forrest Gump’ set to run until he could not anymore. Could Kimble, age 29, break the trans-USA time, running nearly 2,500 miles coast to coast? 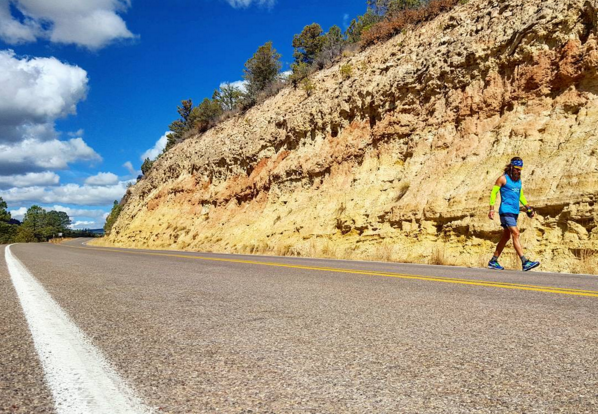 It was February 15, 2016, when Kimble set off from Huntington Beach, California. Now, we sit at the beach on Tybee Island debriefing Kimble’s feat and reporting from Rivers End Campground

Behind The Scenes: GearJunkie Mobile, Powered By EnerPlex 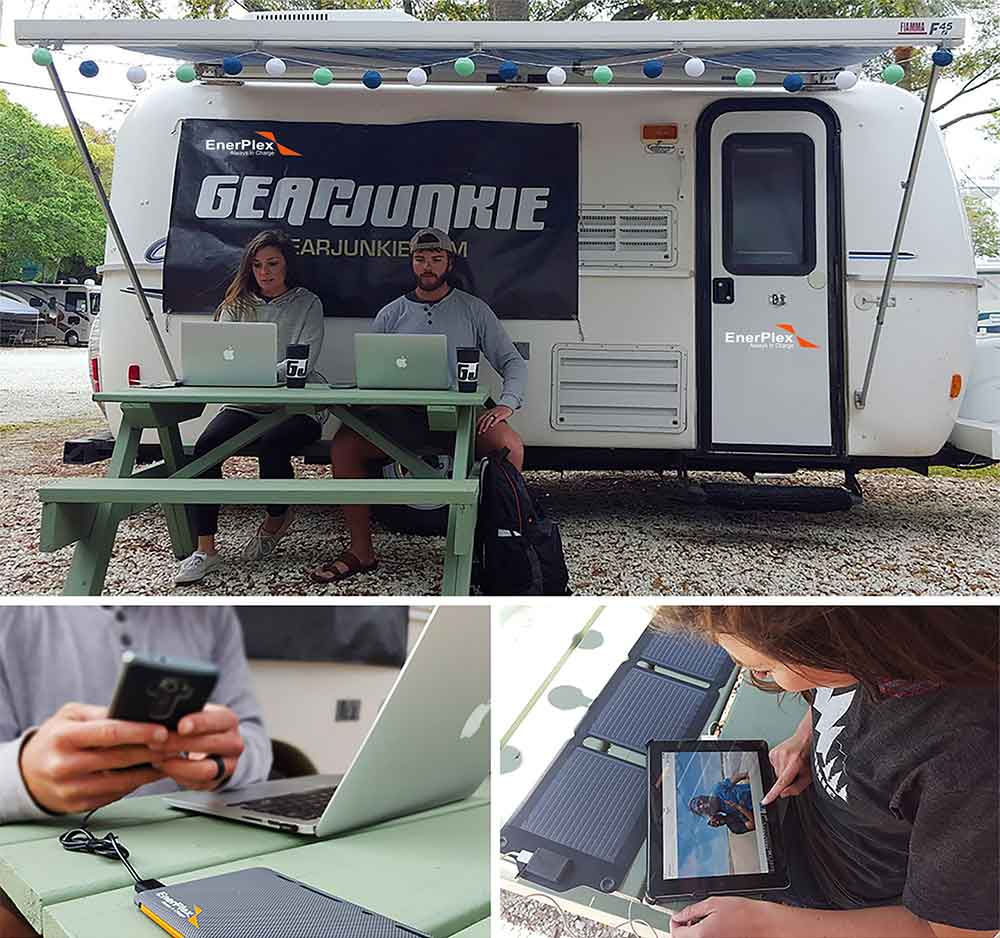 Beginning this spring, follow GearJunkie contributors Adam and Lindsey Nubern as they travel the U.S. in search of adventure via a nationwide tour. Photos, video, and feature articles will be developed via a “mobile office” setup, powered by EnerPlex equipment, to publish from the road or remote trails.

All told, Kimble ran an average of 45 miles a day, or just shy of two marathons a day, with only five rest days total. His highest mileage in a single day? 76.3 miles. He took the last step of a 2,471-mile coast-to-coast run into the Atlantic Ocean on Thursday, April 14 at 11:50 a.m., on Tybee Island, Georgia. 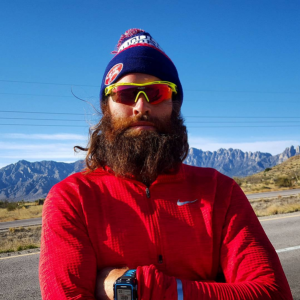 As two of Kimble’s crew members, we were overwhelmed with amazement, bubbling with excitement, and had enormous relief as Kimble took his final steps into the Atlantic waves. This moment was a long time in coming.

Kimble started the run in pursuit of breaking the Guinness World Record for the fastest crossing of the U.S. on foot by a male. The record — 46 days 8 hours and 36 minutes — had stood for 36 years, run by Frank Giannino Jr. in 1980.

Kimble, who had won the Gobi March, a 155-mile race in the Gobi Desert of China, dreamed big and had tall expectations for himself to beat the record in 45 days, averaging 69 miles a day.

By day three on the attempt, however, Kimble began experiencing injuries that turned to chronic pain for the entire duration of the run. The pain moved from his shins, to IT bands, then to his Achilles, lower back, and SI joint.

The pain caused Kimble’s mileage to be slower than anticipated. After a few weeks, the miles Kimble had to make up continued to build. The record attempt was no longer achievable.

On March 17, instead of packing up and heading home, Adam announced his mission had changed. Via video on Facebook, he acknowledged the record attempt was no longer the goal.

However, he was going to continue to run and finish what he started. His only change in the whole plan: his final destination. It changed from New York City to Georgia, and the new route would head through Louisiana, Mississippi, Alabama, and finally Georgia and the shores of the Atlantic Ocean.

Even without the record attempt, Kimble pushed hard every day to hit the finish line. His routine: Wake up at 3am, start to walk at 4am, then continue walking and running in five or seven-mile sections until completing a daily mileage goal. 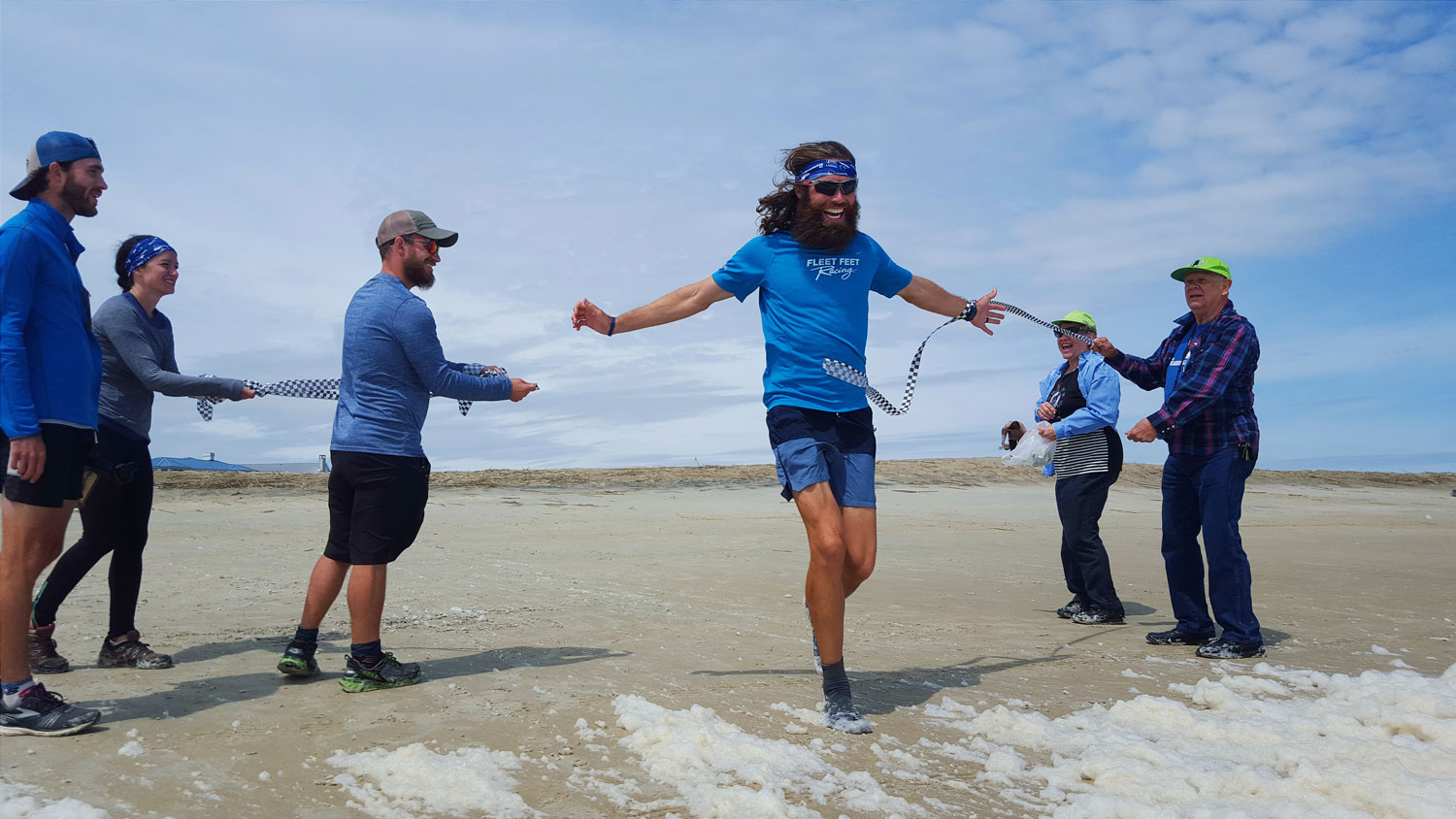 What Kept Him Going?

Kimble kept motivated “to inspire people to pursue their passions [and] accomplish things they never thought they could do,” he said. Raising awareness for the organization Impossible2Possible was key to the mission. 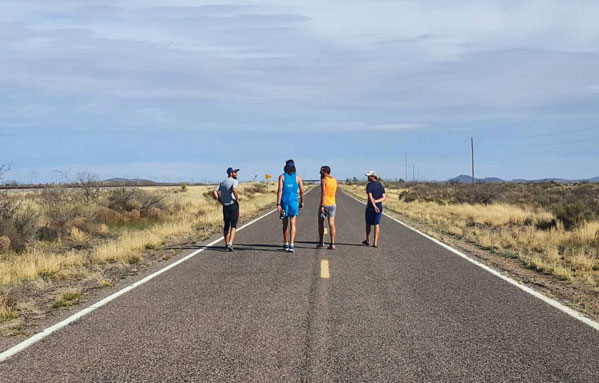 Each hour of every day raised new challenges: a road closure on the route, a tornado warning, flooding, or a new flare-up of pain. Kimble’s crew worked to adapt, adjust the plan, and get creative (physical therapy, dry needling, and cryotherapy, to name a few).

A following developed along the route. Countless messages from over 11,000 followers on social media shared how Adam’s perseverance had inspired them in their own lives from running their own bigger mileage goals to finding faith in God. (Side note: Adam personally inspired me to overcome my fears and “impossible” and publish my first book.) These stories motivated Adam to keep putting one foot in front of the other. Each step kept inspiring more and more people.

What Kimble looks forward to most after finishing? Not running! While the crew took turns running with Kimble at night, he always laughed and gave a huge smile when envisioning the end and the reward of relaxing on the couch with his wife Karen and being reunited with his pup Sofi. 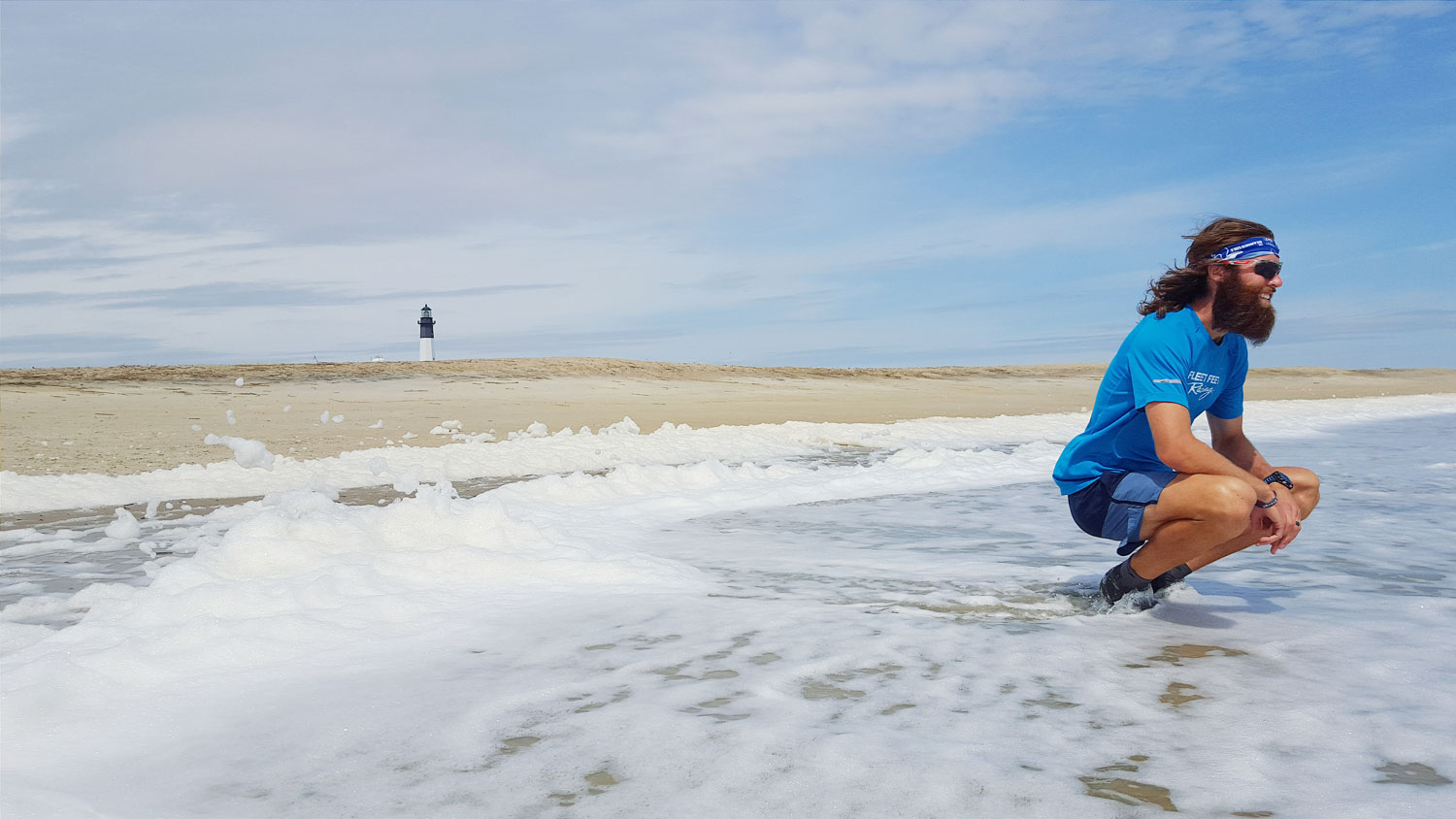 Up Next: Kick Ball As You Run? Wood ‘Bole’ A Tarahumara Game