‘There’s no way that can float.’ That was my thought looking at the Russian-Nesting-Doll-esque 3.5-foot packed kayak. Less than ten minutes later, I was offshore, cutting through the water in a shiny 14-foot kayak. 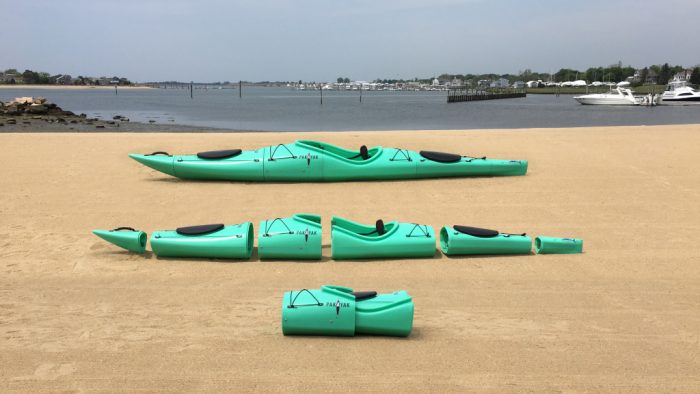 The Pakayak Bluefin 14, which debuted its Kickstarter campaign on June 16, is the newest entrant into the collapsible kayak market. The trend capitalizes on space-constrained water lovers, like RVers, city-dwellers, sailors, those with compact cars, etc.

I personally find myself in this category, currently confined to a 720-square-foot apartment with no place to store a kayak. That’s why I was delighted to give this “nesting” design a try, eager to witness a touring kayak disappear down to waist-height and store under my clothes rack.

How The Kayak Packs

The kayak is split into six roto-molded sections, with each one resting inside the other until the unit is fully packed down.

Packed dimension are 3.5 feet tall, 2 feet wide, and 16 inches deep, ideal for tossing in the back seat of a car. 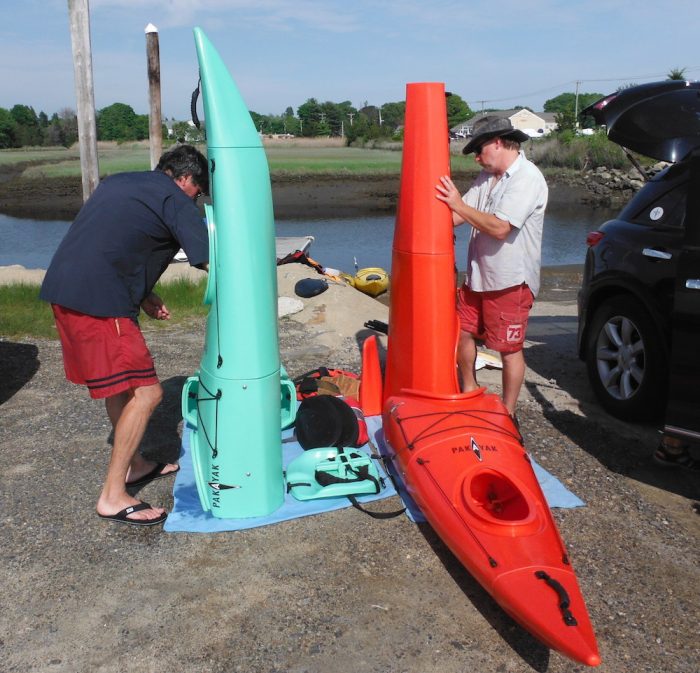 To assemble the unit, the brand recommends laying down a blanket over the sand or dirt to avoid getting grime in the rubber seals. With the pieces set out, you assemble the front and rear halves of the kayak separately, clamping each section with latches that form a watertight seal. Once the two halves are assembled, fit them together and clamp the unit up.

Insert the seat, complete with a comfy back and bum cushion, and clip on the knee pads, which keep your legs from bumping up against the inside of the boat in rough water. Other accessories, like front and rear bungee deck rigging, storage hatches with silicone covers, and carrying handles, are already installed.

I timed the Pakayak crew as they assembled four different Bluefin 14 models, and the average assembly time was 5.5 minutes. Disassembly is just as quick and easy. In fact, it took the crew about 8 minutes to strap an old 16-foot kayak on top of their car, and about 6 minutes to disassemble the Pakayak and toss it in the back seat of a four-door Honda. 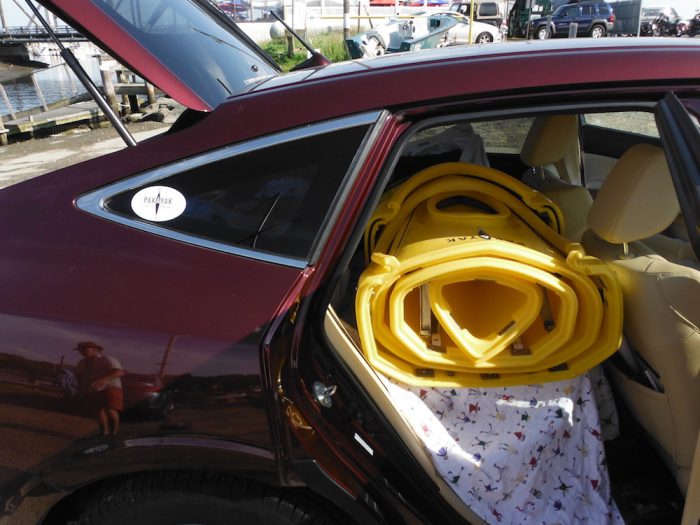 During my 6+ hour test on a river in Connecticut and on the choppy Long Island Sound, I kept experiencing two opposing disbeliefs: When I saw the kayak all packed up, I couldn’t believe the unit becomes an efficient, floating boat. Conversely, when I was on the water, I couldn’t believe I was paddling in a sectional kayak.

The boat is sleek, at two feet wide, and it is exceptionally fast. It glided through calm river waters with ease and accelerated on a dime. Though narrow, it’s also stable. Amid waves on the open Atlantic Ocean, the kayak showed no sign of feeling unstable, even for a recreational kayaker like myself. 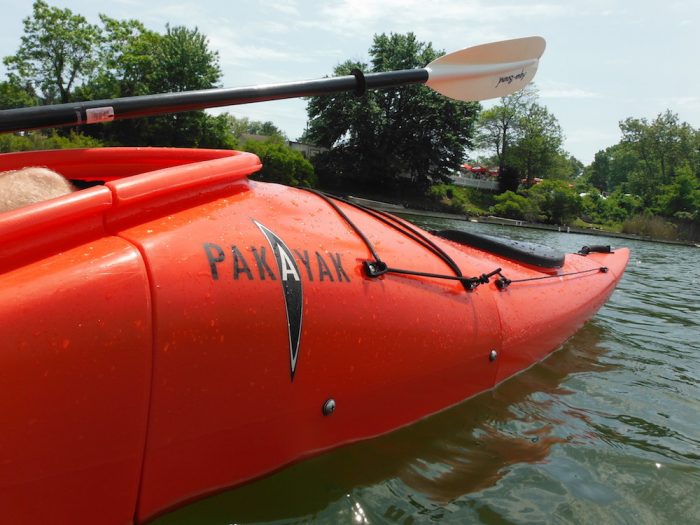 Throughout the day-long test, neither my kayak nor the other three Pakayak’s showed any sign of a leak. The only water inside a boat that day was from a wave that toppled over the kayak’s opening, an incident easily prevented with the optional spray skirt.

The seating area is decently roomy, with foot rests to improve paddling power and stabilization, and the plastic seat with accompanying cushion was plenty comfortable for hours on the water. 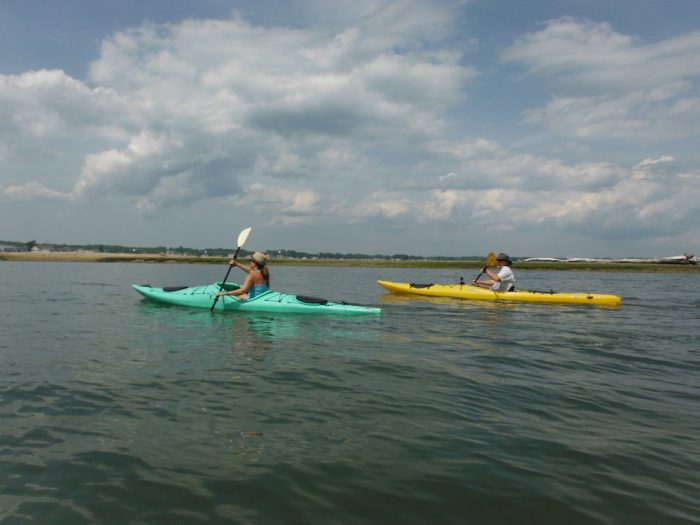 The only gripes I had were minor and, according to the team, were expected to be fixed with the first round of production-ready boats. For some reason, my fingernails kept catching the connecting section of the cockpit when I paddled. After a quick and minor change of paddling form, though, the problem was resolved. Additionally, my seat back, made of a thinner plastic than production boats will be, would slightly bend and slip behind the back opening. An easy fix with the expected harder plastic.

The Pakayak team of four, Doug and Zinelle Mackro, Phil Miller, and Day Moore, have been together for two and a half years now. The dream began when Day’s kayak broke in two and Zinelle’s husband, Doug, volunteered to repair it, essentially clamping the two sections together. 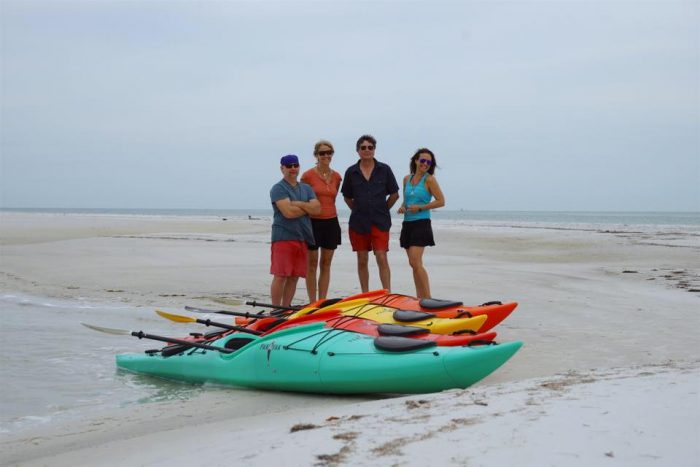 Today, the Pakayak Kickstarter campaign is underway and has raised $130,000 of its $427,325 goal. Its cost breakdown is provided on the campaign page, along with several options for funding.

The Bluefin 14, which comes in four colors and will retail at $1,695, is currently available at an early adopter price of $1,495, cheaper than the 12-foot Oru Bay+ collapsible kayak and a good deal for this new invention. It weighs 55 pounds, comparable to other hardshell touring kayaks, and it comes with a bag to roll the collapsed unit or hike with it on your back. 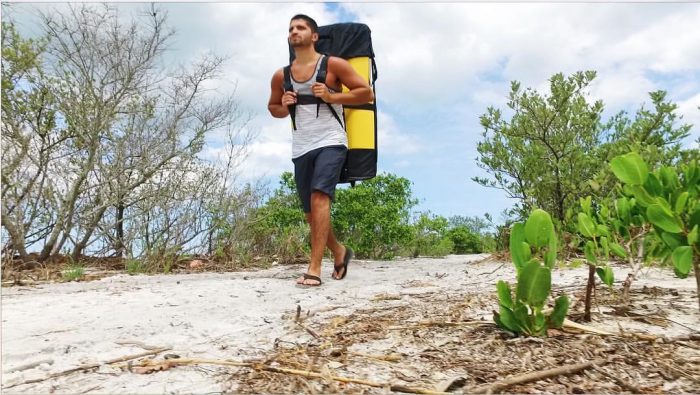 The Pakayak team has big ideas for the future too, like special inserts for the Bluefin 14 to create a double kayak, a place for your dog, accommodations for fishing gear, and more, and the brand wants to create a longer touring kayak as well. For now, the hope is to get the initial funding necessary to get these boats out to the market so people can experience it firsthand, both packed up and out on the water.

Up Next: Plains Paddle: Road Trip Pitstop At The Platte River