Just because summer is ending doesn’t mean steelhead fishing has to. These are some of the most effective tactics to target summer steelhead through December.

In fact, targeting summer steelhead through the fall is often one of the most exciting ways to catch them! Most summer steelhead don’t spawn until late winter or early spring, meaning they’re in the rivers a lot longer than you may think.

Fishing for summer steelhead late in the season offers a few benefits. Most importantly, the fishing pressure is drastically lower as fall approaches than it is during the peak season of summer. Anglers have lost interest in steelhead, and you’ll have a lot more water to yourself when you’re out fishing.

Another appealing factor of late-season summer steelheading is that fishing can be better than it is during the summer. Many fishers prefer fishing for summer steelhead after the crowds and summer heat have left the water, as you’ll be fishing with different techniques and with a different approach.

Here are the six most effective ways to target late-season summer steelhead.

We talked to Brian Stephenson, a guide apprentice and sales associate at the renowned Deschutes Angler Fly Shop, about some of his favorite ways to change his approach for late-season summer steelhead.

Stephenson recommended fishing “slower water, as the fish aren’t going to be holding in the fast riffle breaks and oxygenated water as water temperatures get colder.” Whether you’re fly fishing or fishing conventionally, this means that you’ll need to think about the type of water you’ll be fishing before you head out there. 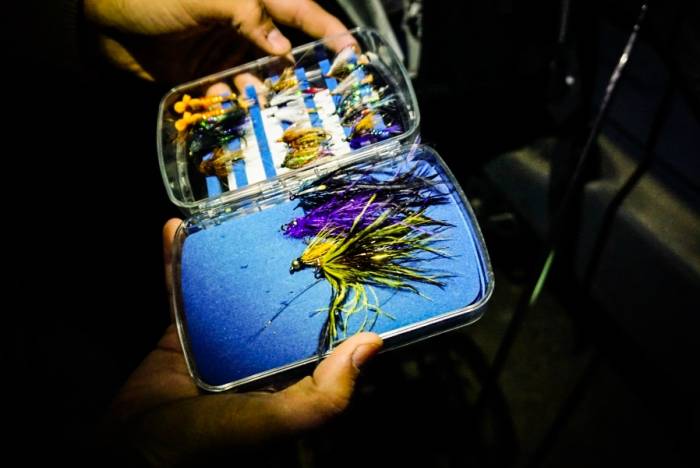 Fishing for summer steelhead in the fall follows some of the same principles of winter steelhead fishing, meaning that you can go pretty big with the lures or flies that you’re throwing. Often, changing it up to a larger lure can produce a lot more fish, and it’s definitely worth a shot.

Whether you’re spin fishing or fly fishing, using more weight to get your presentation down to where steelhead are holding is a brilliant way to catch more late-season summer steelhead. A fly fisherman himself, Stephenson often switches to weighted flies or sink-tips as the water gets cooler and steelhead take refuge in some of the slower, deeper runs.

If you’re spin fishing, this could mean tying on a bigger and heavier spinner or setting your float fishing rig a little bit deeper. Fish aren’t going to be as shallow as they are during the summer season, so you’ll have to get your lures down to where they’re holding to maximize the amount of steelhead you can catch.

As summer transitions to fall, steelhead will hold in all different types of water. Getting down and fishing some of the more rough and rugged water can often produce fish, even if it’s water you wouldn’t normally fish. The transition from the riffles and pocket water to the slower runs takes time. In that transition time, fish will be all over the place.

When you’re having a tough day on the water, fish some unconventional water, and it might be the tactic that turns your day around. Should conventional methods fail, you can turn your attention to all types of water from shallow pocket water to deep, rough water and everything in between.

Slow Down Your Presentation 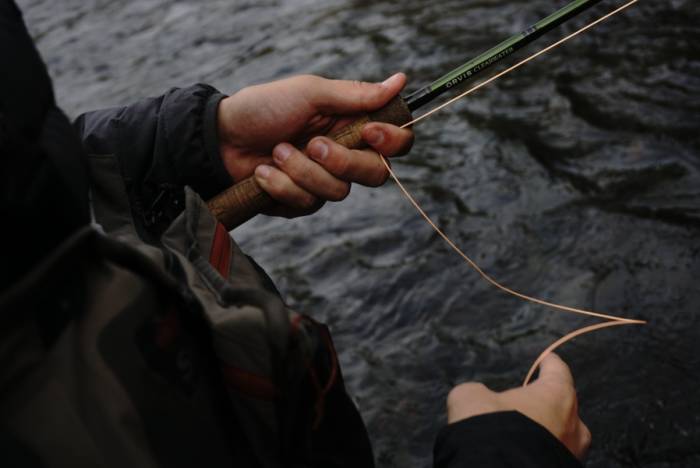 Stephenson also recommends a slower presentation during the cooler months. “Fish can be a little bit less aggressive, and you might need to swing your lure in front of their face a little longer than you normally would have to,” he told GearJunkie.

There are plenty of ways to accomplish this. If you’re float fishing, using a bigger float and heavier in-line weight can help to slow down the presentation of your bait or jig.

With spinners and spoons, heavier weights and more precise casting can help to allow them to swing across the water as slow as possible. With spey fishing, Stephenson recommends fishing a Skagit sink-tip-style line and mending frequently to maximize the depth of your fly.

The bottom line? Slowing down your presentation can result in a lot more late-season summer steelhead, and it’s incredibly easy to do.

Even though the seasons are changing and rivers are cooling off, techniques that catch steelhead in the summer will still work, especially before winter truly sets in. It’s important not to abandon the tactics that work so well in the summer because those methods will still catch summer steelhead through the fall and winter.

Examples of summertime tactics would be fishing lightweight, smaller jigs and spinners, as well as floating fly lines and skating flies on the surface. Stephenson said, “Sink-tip lines aren’t the end-all-be-all. Sometimes I find myself fishing a floating line well into the winter, and I catch plenty of fish that way.”

Whether you’re fly fishing or conventional fishing, summer steelhead are ready to attack lures a lot later in the year than you might think. Next time you’re out on the water, try a few of these tactics if you’re looking to catch late-season summer steelhead like a pro.