Tranya, a Hong Kong-based brand dedicated solely to personal audio, claims its $80 wireless workout headphones create a ‘musical feast for the senses.’ So, with hungry ears, we put ’em to the test.

With cords quickly making their way to the exit, it’s time to look into “truly wireless” headphones. The first generation of wireless audio meant in-ear headphones that attach to one another with a wraparound cord. But these days, with increasingly sophisticated Bluetooth technology, “cordless” means absolutely no cords.

But with the best wireless workout headphones pushing $200, jumping into the world of wireless can be a shock to the wallet. Enter the Tranya Rimor “true wireless” headphones. Even at $80, the headphones boast “the most advanced audio technology” for active and everyday audiophiles.

Note: At the time of publishing, we found these headphones available on Amazon for $50. You can also buy the headphones directly from Tranya for $80 here.

I previously tested the $180 Jaybird Vista wireless earphones and loved them. So I came into this review with a high bar. Over the last 2 months, I’ve worn the Rimor headphones for runs, bike rides, home chores, and at work. I tested them for audio quality, functionality (pairing, range), and utility during exercise.

In short: For the money, it will be tough to beat the Tranya Rimor wireless headphones. The design and out-of-the-box functionality compete with options more than twice the price.

It doesn’t quite provide the rich sound that Jaybird’s Vista achieves with its personalized EQ. But the Rimor offers a more streamlined fit and feel, and even punches above its class with greater range and quick, reliable pairing.

Like many competitors, Tranya packages its Rimor headphones in a sleek charging case. And when I say sleek, I mean it. Both the case and headphones go for a round, smooth design.

This may seem purely aesthetic, but I actually had a difficult time getting the marble-shaped headphones out of the case the first time. This contrasts with competitors like Jaybird and the Under Armour Flash, which offer flat surfaces and edges.

As for fit, my ears consistently work best with the default gels. But Tranya, like others, includes large and small buds you can swap out to secure the best fit.

Once fit, the Rimor stayed in my ear during runs on trails and around the city. Even with some vigorous head shakes (you know, for testing), the buds stayed in place. 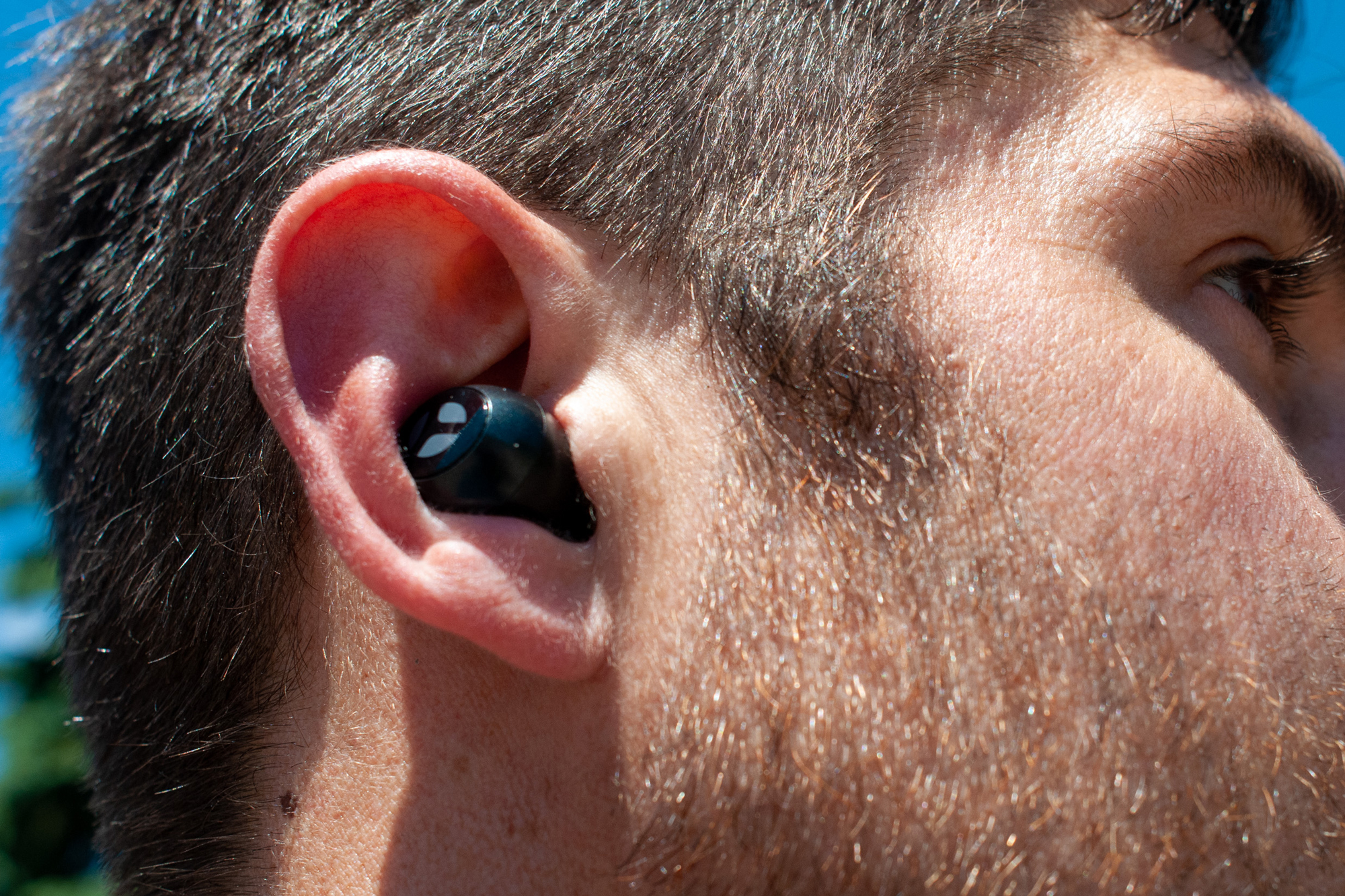 The Rimor also carries an IPX5 water-resistance rating. Effectively, this means they’ll shed sweat and some ambient moisture. However, these won’t work for swimming laps at the local pool.

I had no trouble connecting the Rimor to any of my devices. And after the first pairing, the Rimor consistently found and automatically paired with my phone and laptop.

As for range, Tranya advertises an industry-standard 10 m. But I found the Rimor actually exceeded this on occasion, provided there was a clean line of sight to the device (no walls).

For sheer quantity of listening time, the Rimors are tough to beat. On a full charge, the headphones will run for 5 hours. That’s about standard (Jaybird claims the Vista will reach 6 hours in peak conditions), but with a fully charged case, users can extract 25 hours of runtime.

Of course, that will be broken up by charging cycles of the headphones in the case. But with just a 10-minute charge, the headphones will gain another 90 minutes of juice. A full charge requires 1 hour. The case requires 2 hours to fully recharge. 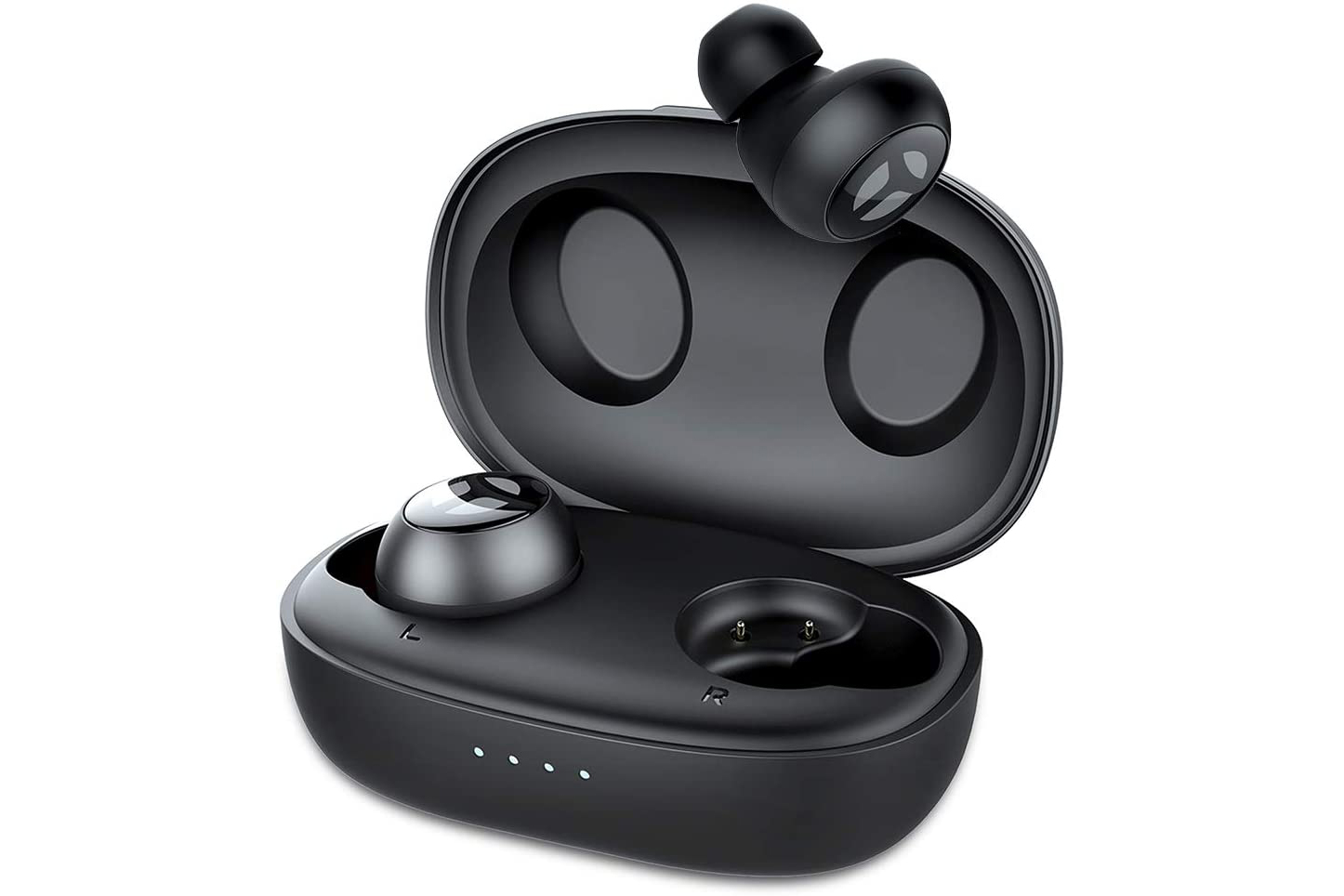 But what Tranya did well here was the addition of a basic charging meter on the case.

Unlike the Vista, which has a fluctuating light that goes solid when fully charged, the Rimor case has four lights to indicate when the case is 25%, 50%, 75%, and 100% charged. This really helps you gauge how much juice you’ll have if you need to pull the case before it’s fully charged.

If there’s one area where premium-price brands separate from the rest, it’s audio quality. That’s not to say the Rimor doesn’t sound good — it offers clear, rich sound. But compare that to the custom EQ of the Jaybird Vista, which tailors bass, treble, and midrange frequencies to your specific hearing thresholds.

Although the Rimor can’t quite mimic that level of audio, the sound it blasts mirrors what you’d expect in any modern headphones. That said, the Rimor outperformed the Vista when it came to two-way audio. On phone calls, others said my voice sounded clearer and had less ambient noise compared to the Jaybirds.

Using the in-earphone controls for the Rimor took some getting used to. Unlike the Vista’s haptic buttons, the Rimor responds to simple touches of the left and right earphones.

Once I got used to it, however, I prefer this to the traditional button press. While running, it can be troublesome to properly depress; it’s much easier to simply tap the earphone.

That said, the Rimor’s touch control isn’t customizable. While the Jaybird has an accompanying app that allows you to choose which and how many presses control what, the Rimor’s control profile is exactly what you’ll get out of the box.

Long press on the right earphone to advance a track, long hold down on the left to go back. Tap twice on the right to incrementally increase volume, and the left to decrease. Answer calls with a single tap on either, and tap again to end calls. Long press to reject a call.

I did encounter one issue with this touch setup. During an especially hot day, I found that if moisture (sweat) sat on the earbud, it could trigger the long-press control. It was easy to rectify and hasn’t happened again, but it’s worth noting.

Finally, those with a smart assistant — Siri, Alexa, Google Assistant — can access it with a triple tap.

After months of using both the $80 Rimor and $180 Jaybird wireless headphones, I’ve come away pleasantly surprised by what Tranya packed into its budget offering.

For less than half the price, you get — in my opinion — a more sleek and user-friendly design, much of the same functionality and versatility across a range of uses, and competitive specs (range, charge time, weight).

Where the Rimor’s price shows through most is the sound. It has a very solid audio quality. But for $100 more, you’ll get noticeably richer, nuanced sound. That said, if you plan to make and receive a lot of phone calls while using wireless headphones, I found that the Rimor filtered out ambient sounds much better than its more expensive counterpart.

If $80 isn’t too big a hit on your pocketbook and you’re looking for a solid pair of wireless headphones for commutes, the workplace, and workouts, the Tranya Rimor is a solid buy.