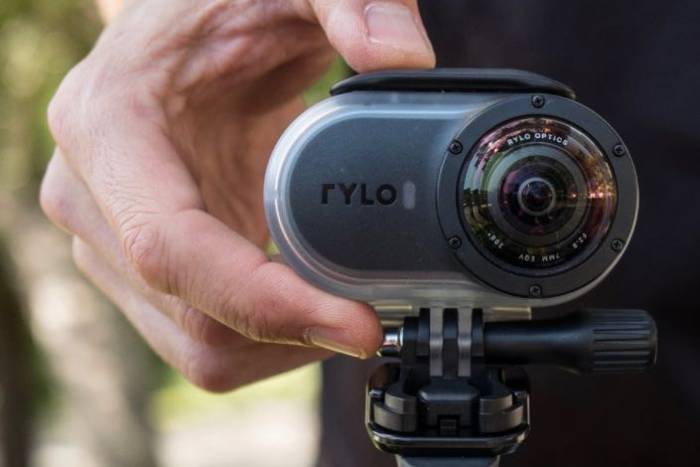 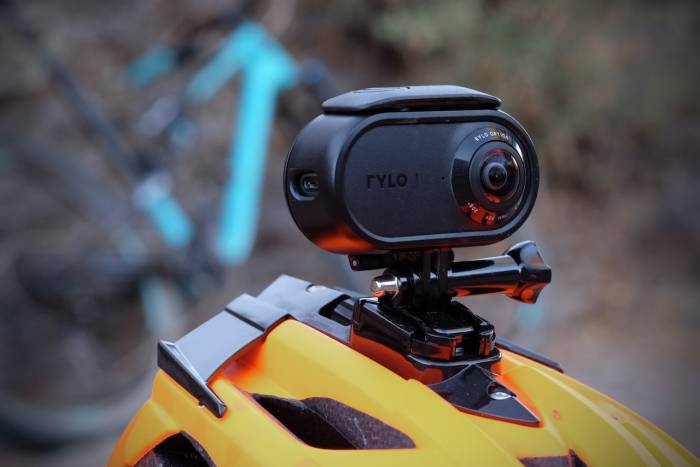 Action cameras continue to push the technological envelope, but most are still complicated and even frustrating to use. Think of all the times you’ve heard someone say, “Is it on? Is the red light on?”

Unlike other cameras with multiple buttons, layered menus, and cryptic blinking indicators, the Rylo is clean and simple. The one primary button powers the unit on and initiates recording. A small digital LCD screen displays relevant information — but only battery life, memory card storage, and shooting mode.

But as basic as it appears, the Rylo is packed with advanced technology. The dual 208-degree lenses capture 5.8K video in a seamless 360-degree view. Whereas other cameras of its kind present a bent wide-angle image, the Rylo shoots in a normal perspective.

The removable battery provides up to 60 minutes of recording time, and the memory slot accommodates a 128-GB microSD card. Because action often occurs in challenging light conditions, the f/2.8 fixed lenses are sharp and work well in low light.

Check out our video review below, with examples of footage from the Rylo.

It’s obvious Rylo set out to make ease of use a top priority. Audible beeps and pulsing vibrations indicate recording modes. Both are helpful with the camera mounted on a helmet or the display out of view. I find I shoot more clips because the camera is so quick and easy to operate. Even with a gloved hand, the main button is easy to locate and actuate.

Editor’s note: In November 2018, Rylo updated its firmware allowing users to shoot video at 5.8K resolution at 24 fps. You do not need to purchase a new Rylo for this update.

The real power of the Rylo system is the advanced editing app. Now available for both iOS and Android, it is intuitive and full-featured. Unlike other cameras that pair to a mobile device wirelessly, the Rylo syncs with a dedicated cord. The hard connection permits quick and reliable data downloads with none of the headaches associated with Bluetooth or Wi-Fi transfers. 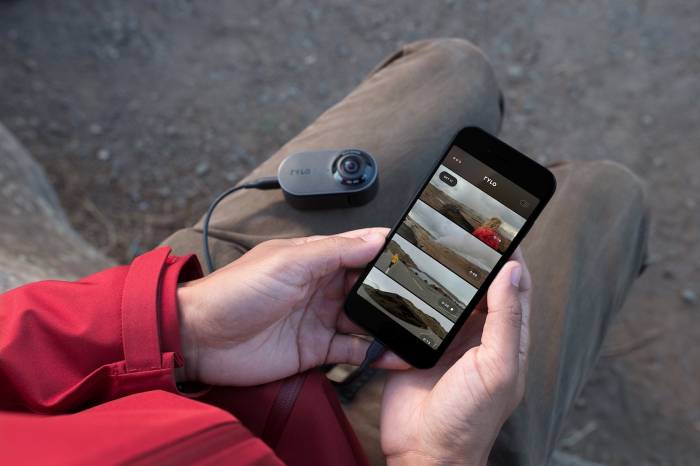 When files imported to a mobile device and a clip is selected, a basic menu displays slider bars to adjust clip length, exposure, tint, vibrancy, and contrast. Additional functions manage playback speed and leveling. For people previously plagued by off-camber footage, the Rylo’s automatic horizon finder keeps most shots level in-camera. I’ve recorded countless clips with other systems only to toss them in the digital trash can due to a tilted camera. 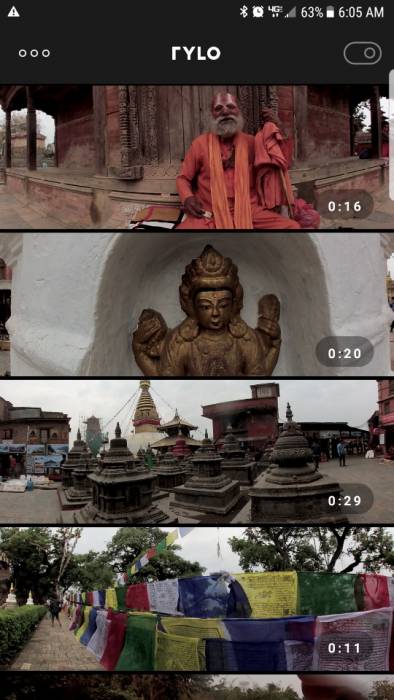 The most unique element of the app is the ability to virtually aim the lens during the editing phase. Rather than manually adjust the view, the “follow” feature locks onto a selected subject to keep it centered in the frame. Most of the footage I captured appeared vibrant and well exposed, with only minor tweaks necessary. Other cameras shoot slightly higher-quality video, but I was quite pleased with most of the clips I recorded.

Rylo’s best attribute is the stable footage, which rivals anything shot on a gimbal. I tested the stabilization against high-frequency vibrations on a mountain bike and slow disruptions while walking. Every clip was rock steady. Because the founders of Rylo co-created Instagram’s popular Hyperlapse app, a simple tap pushes clips to social media channels.

As much as I like the Rylo, even love it, there are few points to consider. It’s difficult to put down — literally. Something as simple as placing the Rylo on a flat surface easily damages the protruding lenses. Even with careful handling, I managed to lightly scratch the forward lens. The optional waterproof Adventure case is a must-have item to ensure you don’t scar the glass. 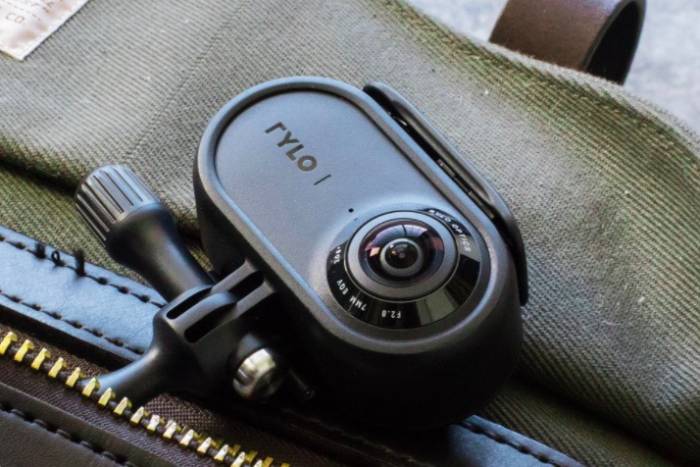 With the camera attached to my phone via the short sync cord, I regularly flopped it on a lens. It’s hard not to. For that reason, it is imperative to keep the soft protective case on hand at all times. And that isn’t my only quibble with the sync cord: It’s a proprietary connector. If you lose it, you’re out of luck until you order another from Rylo. Silly as it sounds, I tied a red ribbon to mine so as to not lose it. 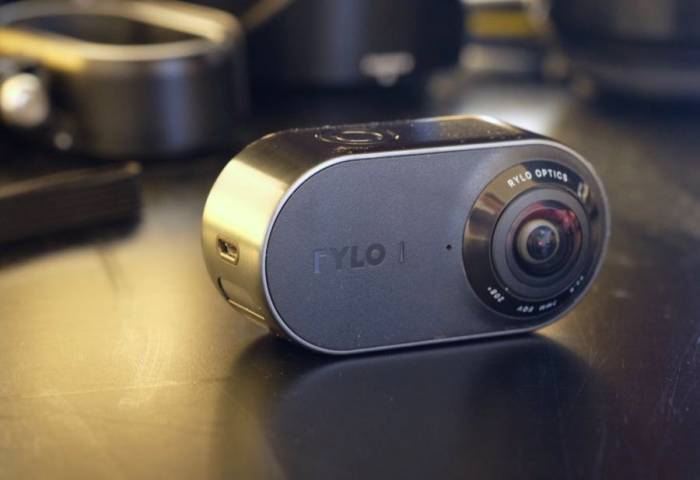 Because the camera records a 360-degree scene, it sometimes struggles to select an optimal exposure setting. More frequently than I liked, the exposure settings presented some annoyance. Narrow streets with bright skies overhead stymied the Rylo’s meter every time.

I understand the need to meter a scene in its full 360-degree glory, but how necessary is it to record what’s happening directly overhead? A few clips I shot were too bright or dark to salvage with the editing tools. In fairness to Rylo, though, any camera with automatic exposure settings will never accommodate all light conditions. 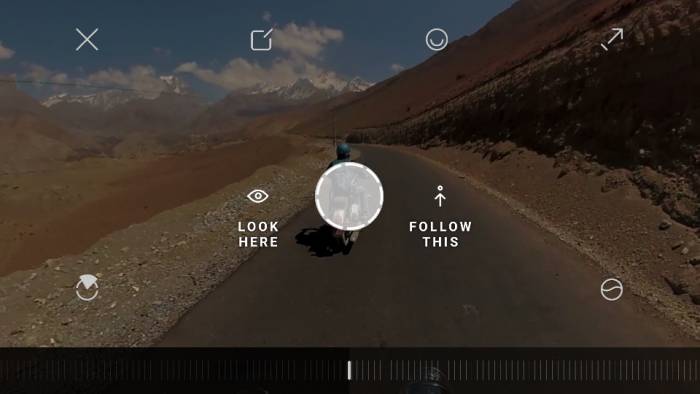 Although it’s a minor grouse and no fault of the camera, the clip files are large and quickly fill a mobile phone. And there is no available desktop app, creating a file management and workflow conundrum. My workaround is to store data the old-fashioned way: in my pocket, with a fresh memory card plugged into the camera.

Rylo priced its camera at the standard market price of $499. For most of us, the value of any camera is hard to calculate because the moments they document are priceless. The Rylo isn’t without its quirks, and there are cameras capable of producing slightly higher-quality video. But few systems ensure you get the shot every time — and perhaps that validates the cost of the Rylo.

The best reason to buy it is the ease of operation and the impressive stability of the recordings. With one touch, it captures scenes other cameras miss. And if you didn’t get it on video, it didn’t happen.

Check out the videos below, created by Rylo, to see what it can do.

Author bio: Christophe Noel is a freelance journalist, photographer, and general vagabond. A seeker of stories untold, he can often be found with a map in hand, lost, in the most remote corners of the globe. The founder of Clean Drink Adventures, he believes in the power of the traveler and doing good as you go.