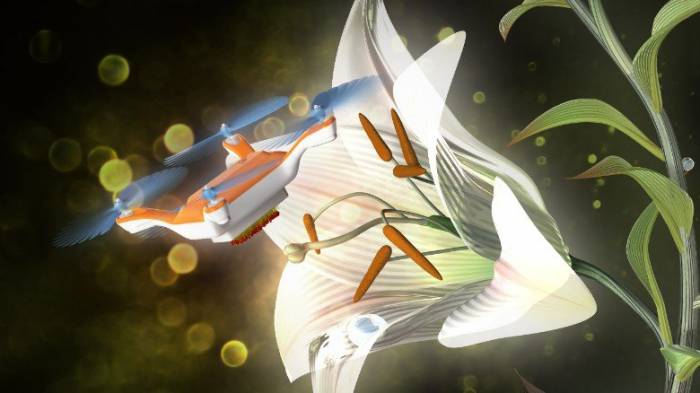 A team of researchers in Japan put drones to the test doing the job of insects. The result was a successfully pollinated flower.

Attach a pad of gel-covered horsehairs to the bottom of a tiny drone. Then, fly it from flower to flower. The horsehairs pick up pollen in one blossom and carry them to another much like bees and other pollinating insects.

A team of researchers performed this experiment attempting to replicate insects in nature. And it worked. The drone picked up pollen from one flower and pollinated another.

A study, Materially Engineered Artificial Pollinators, published in the journal Chem on Feb. 9, details the experiment. While this is a single flower in a very controlled environment, it does point towards the diverse application of drones in the future.

The experiment went far beyond testing the flying device.The gel used in the study is of significant importance. The study examined the use of synthesized ionic liquid gels (ILGs) for biotechnology. It also demonstrated that, when mixed with photochromic organic compounds, the ILGs display rapid color changes, similar to light-triggered camouflage, on living housefly (Musca domestica) specimens. For those interested in the chemistry of the study, the article on Chem goes into great depth.

The Roles Of Bees In The Environment

Bees play a pivotal role in the environment as a primary pollinator for plants. Pollen from one plant travels to another (via bees, insects, and sometimes bats and birds). It’s a key step in producing seeds, fruits, and the next generation of plants. Without the help of pollinators like bees, a large percentage of crop yields would dwindle and food stocks would plummet.

Researcher hope the development of high-performance robotics could help counter a decline in honeybees, insects, or other pollinators.

Bee populations over recent years have been subjected to population fluctuations. Some studies show major declines, while others show increases. Regardless, researchers are plowing ahead with this project.

Given the very diverse crew of insects and animals that serve as pollinators, this drone could ostensibly fill-in during a population collapse of a key pollinating species.

It seems this technology could also be used to automate pollination in certain indoor agricultural settings where humans usually do manual pollination of flowers.

The study did not disclose the brand of drone, but it is a commercially available unmanned aerial vehicle with four propellers. The total size of the UAV is 42 mm by 42 mm with a height of 22 mm. It weighs just 14.8 g. Researchers used double sided scotch tape to attach the horsehairs to the belly of the drone.

The team coated an ionic liquid gel on the horse hairs that effectively induced pollination. This hair and gel picks up pollen and allows the drone to transport the cargo to another flower.

This video shows the experiment in action.

As the video shows, the drone is slightly aggressive (well, a lot aggressive). It’s hard to tell what application this will have down the road.

The team hopes this will lead to further study and breakthroughs of robotic applications in pollination. While nothing will be able to truly replicate bees, this does provide an interesting application for the future of drones.