A monocular with thermal-recognition (night vision) built in? A new FLIR product enables adventurers and anyone to see a whole new side of the wild. 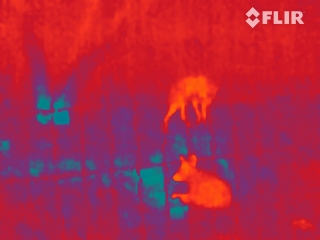 I put a submarine-shape camera up to my eye and scan a wooded area inside the Denver Zoo. After 9 p.m., it is pitch black. I am looking for variation and color in the scene, the visual cues that will indicate life.

I hold the FLIR Scout TK ($599) in my hand, clicking through the settings and, there they were, right in front me, two maned wolves. Their stark silhouettes with long, slender legs look like foxes on stilts. Not a true wolf nor fox, the maned type is only species in its genus, and, through the night-vision device, I could see them almost as clear as, well, day. 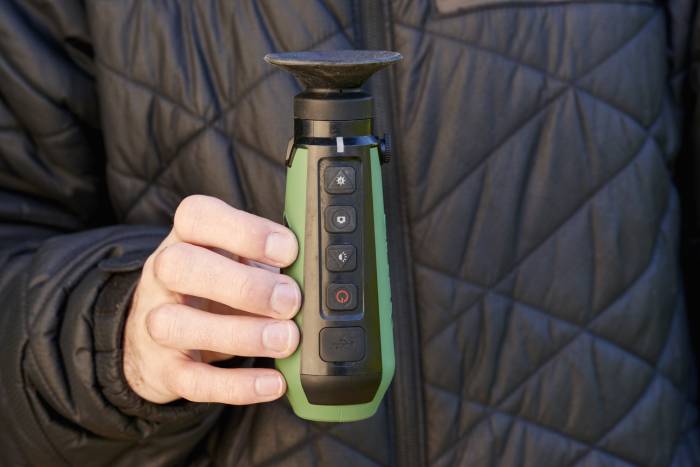 The FLIR Scout TK is my new favorite toy, a grownup version of my childhood kaleidoscope, though quite a bit more expensive.

Released in June, by FLIR—a four-decade-old company coined on creating a “sixth sense” via thermal imaging infrared technologies—the Scout TK is a pocket-size tool and a camera. It is made for campers, hikers, and wildlife observers who want to see through the dark.

Want to see in the dark? This camera by Flir attaches to a phone and provides a lens that senses heat and presents it in the visible sphere. Read more…

Hunters, law enforcement and special operations also use thermal recognition devices. Though, there’s a big technology gap: This camera is geared for the everyday user and costs $599. That is hardly inexpensive, but, comparatively, the ATN Thor-640 2.5-20X Thermal Rifle Scope has a price tag of $6,999. Basically, the Scout is for any outdoors-person who wants or needs to see at night and take pictures and video, too.

One such person: Casey Anderson, executive producer of the National Geographic Wild channel television series, is a wildlife naturalist. Based and raised in Montana, Anderson works in variable conditions all over the world.

He’s used thermal technologies for years, including the Scout, to search for wildlife during photography or video productions, including (for example) tracking down an impossible-to-find animal den in the middle of winter after a snow dusting covered all tracks. Thermal recognition was able to pick up the heat from the animals’ bodies.

Thermal Recognition: How It Works

The Scout reads its environment via heat, not visible light. Heat (also known as infrared, thermal, or energy) and light are each components of the electromagnetic spectrum. However, a camera that’s able to detect visible light won’t see thermal energy, and vice versa.

Night-vision goggles and scopes enhance visible light, augmenting light our eyes could see if it were brighter. What they don’t provide is visible image contrast, so objects can become blurred together or go undetected. Too much light can cause the images to appear over saturated.

Thermal recognition, on the other hand, picks up temperature variations, and thus it can work in complete darkness, and even through through smoke, dust, and light fog.

In lowlight and total darkness, the Scout has a 20-degree horizontal field of view and can detect objects that are more than 100 yards away.

For comparison, an American football field is 120 yards from end to end. The furthest away that I stood from an animal when I spotted it during testing was about half of that distance, about 60 yards, and I could easily discern the animal’s outline. The Scout’s range and clarity impressed me.

For detection, I didn’t notice that the size of the animal played a huge role. The key was whether or not the animal was active or sedentary, thus warm or cool. I could easily discern a zebra or dog-size animal (I didn’t come across smaller ones) as long as its body was radiating heat. If an animal was snoozing or lying down—in the case of a polar bear and a peacock—it was difficult for me to distinguish the body outline at all. I could still see the heart, which looked like a fuzzy blob, though it was difficult to spy.

The color palette options are easy to scroll through, and the variety is key. Each setting helps to illuminate different details in the scene, depending on the light contrast.

It is time consuming to click through each frame, which made me think: if an animal dashed or flew by in the dark, it would be somewhat based on luck as to whether or not my Scout was on the best setting at that second.

While you don’t want to toss it around, it’s durable and can survive a drop. The interface is intuitive with four buttons and a diopter lever, which control the image brightness and sharpness and provides a selection of color palettes, including black and white, rainbow, lava, and arctic. 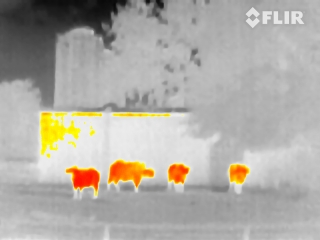 The storage capacity is up to 1,000 snapshots and four hours of video. It can be uploaded by USB. The video looks really cool but does not record sound.

The device weighs six ounces and has a rechargeable battery that lasts about five hours.

Aside from animal scouting, another thermal night vision application is checking to see if the campfire is completely out.

On the domestic front, people can use the Scout to search for lost pets and for nighttime wildlife observation. In Telluride, CO, for instance—where I grew up—brown bears commonly frequent the alleyways in the summer. It’s a common theme for neighbors to stand on the upper deck to get a glimpse. 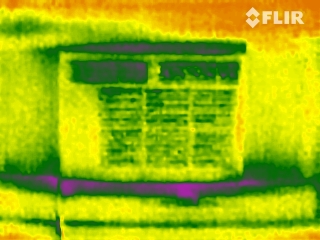 Using the Scout, I can see what buildings and materials absorb and hold the most heat from the day, where my living room window has gaps—thus leaking the A/C unit’s chilled air—and whether my tea pot is still scorching hot.

I have not needed to use it for safety purposes, but if someone were walking out of their office building late at night they could use the Scout to scan the parking garage or sidewalk. Anderson also used the Scout to identify a tire leak: The interior air temperature contrasted with the ambient temperature, so the hole was detectable.

Want to see in the dark? Learn more about the FLIR Scout TK online.