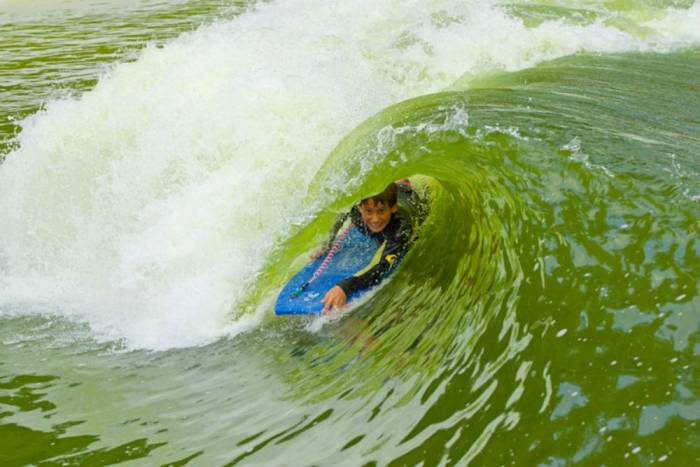 [leadin]The waves will roll in every 60 seconds with no regard for low tide or meteorology at the NLand Surf Park in Austin, Texas, where beginners and pros can rip swells from one to six feet high in a lagoon filled exclusively by rainwater.[/leadin]

The “net zero” water park utilizes the patented wave technology of Spanish engineering firm Wavegarden, which touts its wave-generating invention and lagoon design as the most energy efficient artificial wave on the market.

Opening this spring, the NLand Surf Park will cover an area the size of nine football fields and crank out 300 waves every hour that “never lose power or shape.”

The park will have 11 surfing areas for four skill levels – suitable, the company said, for all ages and skill levels. There is also a surf school on the premises.

NLand CEO Doug Coors (of the Coors Beer dynasty) claims its facility will run exclusively on rainwater “even in the most challenging drought conditions.”

The Austin surf park will be the only such facility in North America. A similar Wavegarden park in the U.K. – Surf Snowdonia – charges $30-$45 per hour, or roughly 13 waves. That’s pretty steep for an hour of fun, but potentially worth it for those landlocked souls yearning for some curls.

Check out NLand Surf Park online for information about its opening and Wavegarden for other parks around the world.