Has there been a bigger action star than Arnold Schwarzenegger? Sure, you could argue for Reeves, Stallone, or Cruise. But do any of them have a retro-cool watch named after them?

That’s right — we’re talking about the new Seiko SNJ025 ($525), known lovingly as the “Arnie.” Its predecessor was a mainstay of ’80s action, appearing on the dangerous arm of its namesake in several films. From “The Running Man” to “Commando” and “Predator,” it’s one of the most iconic timepieces of the silver screen.

This new model has been a hot commodity since its April announcement and its release early this autumn. And with Schwarzenegger’s “The Terminator” back in theaters, it’s only fitting that he’s also back on our wrists. 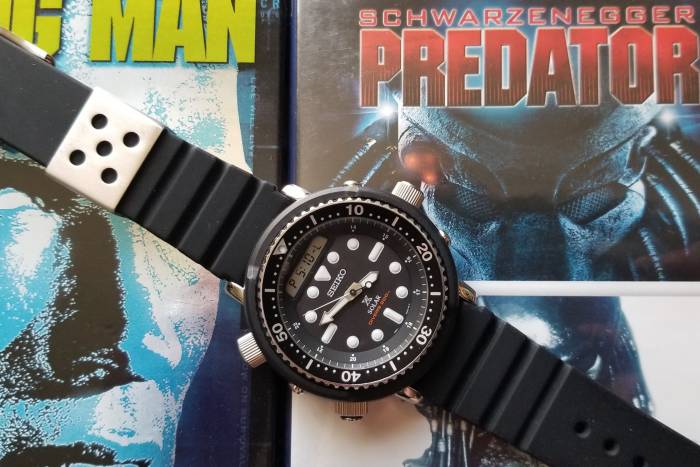 Like any sequel to an all-time classic, the SNJ025 has a lot to live up to. Its 150M quartz ancestor, the Seiko H558, earned a cult following soon after its 1982 release.

Though most notably worn by Schwarzenegger, it also graced the wrist of Roger Moore in the 1985 James Bond film “A View to a Kill.” At the time, it was an innovative combination of classical dive-watch aesthetics with the added durability of quartz.

So, how do you bring a classic into the modern age? As with the best sequels, it takes respect for the source material, attention to detail, and a few modern touches.

The premier player here is Seiko’s Caliber H851 analog/digital movement. This adds my favorite feature of quartz to the Arnie’s arsenal — solar charging. It’s a great piece of tech, capturing one of the biggest advantages of a mechanical watch (no battery changes!) while maintaining the rugged reliability of quartz.

Speaking of soaking up sunlight, the lume on this watch is fantastic. Those large, circular indices really pop in dark conditions.

But, say you find yourself on a multi-night jungle operation; the upper left-hand pusher activates the backlight on the digital screen, allowing you to use the more complicated functions. These include a chronograph, alarm, calendar, and dual time — all easy to use thanks to the intuitive three-button layout.

There are lots of little touches to enjoy here. I especially like the strong action of the 120-click bezel, and the screw-down pushers are cool. Their rotation direction is inverted (left to tighten, right to loosen), but the end effect is the same — 200 m of water resistance.

The 22mm silicone band on the Arnie is soft and generally comfortable, secured with drilled lugs. It mates to a resin-guarded stainless steel case, with the classic Seiko wave logo on the back.

This watch is available in multiple colors, including black, gold, and an attractive blue-and-red “Pepsi” design. But because the Arnie’s movie cred was its main allure for me, I opted for the film-faithful black-on-black model. While it looks a bit plain in photos, the in-person impression is much more refined.

The Downsides of the Arnie

Unfortunately, the whole “sequel” analogy holds in some less flattering ways. While the watch’s namesake may have shrunken a bit over the years, the Arnie has put on some considerable bulk.

While I appreciate the brand sticking to the original 11.3mm thickness, not all of us have Schwarzenegger-sized wrists. This watch really didn’t need to be any bigger.

I’m also not a fan of Seiko’s choice in crystal. With a retail price just north of $500, I feel buyers should be treated to sapphire rather than the propriety Hardlex. Is it better than standard mineral crystal? Sure. But, if you’re going for the action-film aesthetic, why wouldn’t you want the scratch resistance of sapphire?

My biggest complaint has nothing to do with the watch itself. Rather, it’s the band’s metal keeper. While it slides nicely across the silicone, the edges could use some sanding down. When my wrist swelled from physical activity, I could feel the poke of its sharp corners.

So, the Arnie is a very nice watch. But is “very nice” enough justification for a $525 retail tag?

Here’s the thing: You shouldn’t pay retail for most watches. An authorized jeweler can usually help you out on price. In my case, I was able to secure the model shown here for $415 upon its release. Once the marketing hype dies down, these pieces could creep back toward that neighborhood.

Then again, there are a few working models of the original H558 Arnie floating around on eBay for $300-plus. With its solar charging, improved water resistance, and next-gen pedigree, the SNJ025 could enjoy a similar level of staying power.

But, unlike other collector pieces, this watch is more than capable of surviving the rigors of hard work and play. Or, you know, a run-in with a trophy-hunting monster from outer space.

Up Next: PowerWatch Series 2 Review: GPS Watch Makes Its Own Electricity