The Colombian highlands have towering palms, active volcanoes, and the best coffee in the world. And the region is rapidly becoming a premier destination for adventurous cyclists looking for next-level tours. 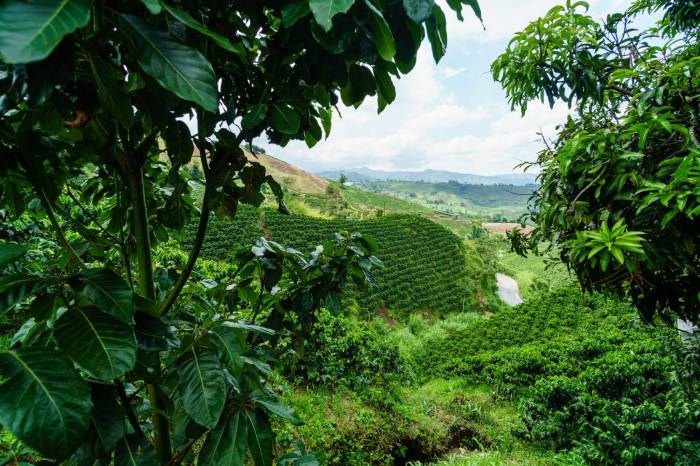 Head down in the saddle, I’ve spent hours watching my feet pedal circles in the easy cog. I glance over my shoulder and catch a sea of hills, crashing together in a patchwork of bananas, plantains, bamboo, and eucalyptus interrupted by perfectly combed rows of coffee shrubs, creating a lush tapestry of electric green — so much green you could fill Sherwin-Williams’ entire Pantone library.

The wind funnels off the cloud forest, down the road, and catches in my unzipped jersey. But the air is too thick, the breeze too faint. I lift my chin, wipe the sweat from my brow, squint and see a steeple piercing the skyline, signaling relief — and a coffee break.

Colombia is grand by almost every scale — skyscraper palm trees, mountainous climbs, mythical roads, and spectacular coffee. Arguably at the heart of what makes it so is the trifecta of sun, soil, and moisture. And it’s what makes Colombian beans the fruit du jour.

Pinched between the Andes and the Pacific Ocean, and damn near straddling the equator, the Colombian highlands counts rainfall in meters, not inches. And in these parts, monsoon season pulls the plug twice a year, and with it pours nearly 10 feet of water inside a year. Over time, villages have adapted and taken roost at the tip-top of the hills, out of the way of turgid rivers.

While Colombia’s geography works over the cyclist, the combination of rain and altitude is the perfect alchemy for the universal elixir: the delicate and highly sought-after arabica coffee bean.

The arabica cherry is a picky fruit. Not just any configuration of sunlight, soil, and water will do. The arabica needs a specific altitude, a moderate temperature, buckets of water, and a meticulous harvesting technique. The berry takes between 5 and 6 months to mature, ripening bright-red at the end of the rainy season. Because the arabica grows on steep mountain slopes, workers handpick every bean.

A machine can’t tell the difference between the green, the ripe, and the overripe bean. But a knowledgeable pair of hands can selectively pluck over 400 pounds of perfect fruit a day. And in Colombia, that equates to nearly 11.5 million bags of coffee picked by hand each year.

And the juice is worth the squeeze. The smell is fruity — likened to blueberries — and the bean brews a “bright” flavor, with floral hints, a sweetness, a tang, and half the amount of caffeine offered by robusta bean. 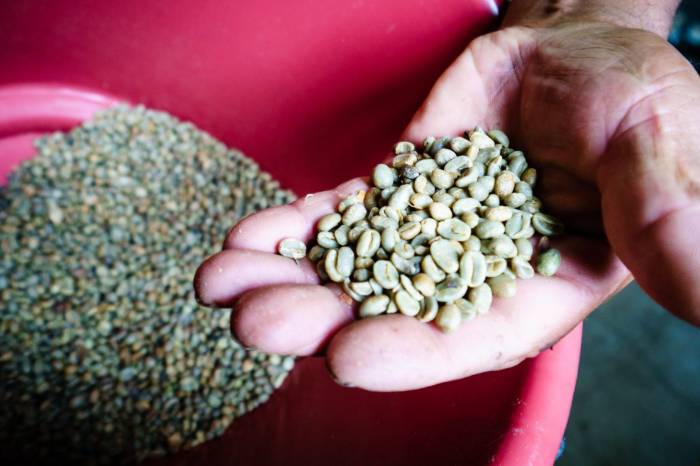 Sun, soil, and moisture — the coffee tree thrives when all three align. The robusta bean, the other of two primary coffee beans used in our morning joe, is the hardier. It flourishes in less than ideal conditions, is resistant to pests and heat, and is cultivated and harvested en masse by machine. While the robusta bean yields more caffeine, it trends more neutral-to-bitter in taste.

Modes of Transportation in Colombia

We finally top out into the town of Marsella. Framed with colonial buildings, each awash in its own Easter-egg hue, the central square is alive with rugged 4x4s pumping people and supplies into the heart of the city. FJs, Suzuki Samurais, Nissan Patrols, Series Land Rovers — the vintage 4×4 is in its natural habitat in the Colombian backcountry. But the mechanical mule of choice? It’s undeniably the Jeep Willys. 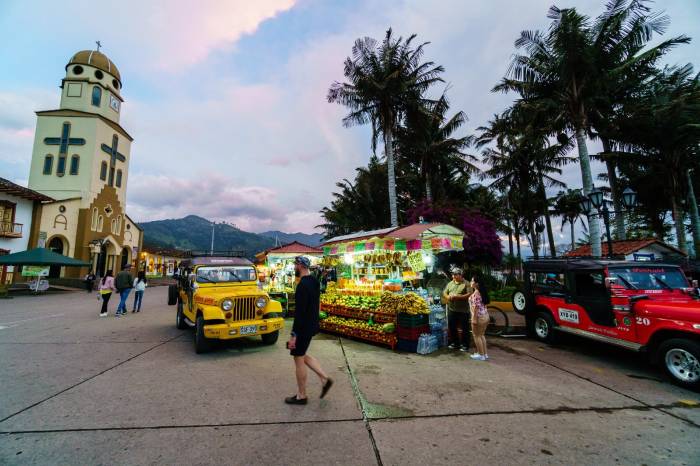 After World War II, the U.S. sold off its massive surplus of CJ Jeeps and the Colombian Ministry of Defense was quick to snatch up a fleet of the iconic 4X4. Colombia didn’t have an immediate conflict to leverage the Jeep. But, reliable and easy to repair, the Jeep quickly was embraced by rural farmers who found the Willys an upgrade from the horse and cart that previously worked the front lines of agriculture.

Today, the iconic Willys is synonymous with the coffee region and is still commissioned to haul supplies, taxi the neighborhood (a stout Jeep can haul up to 14 passengers), or cruise the strip at Yipao. (The annual Jeep parade in Armenia celebrates the “mulitas mecánicas,” or metal mule.)

We pull up among a row of Jeep Willys, lean our bikes against a bright, creamsicle-colored building, and pull a chair at a coffee stand, joining a crew of local farmers sipping coffee in the shade. In Colombia, coffee isn’t rushed away in paper cups. It’s savored in ceramic and facilitates a bond with others. A few days prior, I made my own personal connection over coffee with Juan Pablo Ortiz at Les Amis Bizcocheria, a trendy pâtisserie in Bogotás’ Virrey Park.

A lanky frame matched with a gentle smile and soft voice, Ortiz has a cyclist’s build. When not grinding up and down the local Bogotá trials, he works as a marketing manager with 14 OCHOMILES, supporting Colombia’s voracious appetite for all things cycling. With spools of glass tarmac snaking through the highlands, the Colombians have long dominated the mountains at the international level. Their own Alpe d’Huez is an 85km ride that climbs like angel up Alto de Letras.

It’s a 10,500-foot ascent that crests the shoulder of an active volcano (Nevado del Ruiz) and is reputed to be amongst the longest climbs in the world. Pros can chew it up in under 4 hours. Mortals will take upwards of 9 hours with another 3 hours descending. Cycling is so big here, in fact, that every Sunday, Bogotá, Cali, and Medellín block off hundreds of kilometers of city streets to cars in favor of cyclists and pedestrians.

Sipping his espresso, Ortiz waxed poetically about his dawn patrol rides. “We get up at 4 a.m. to escape the crowds and ride uphill until we run out of time or run out of legs,” he said. Even with the local hills topping out at 10,300 feet, I still doubt he runs out of legs.

I asked Ortiz what fuels the economy in Colombia. He replied, “Flowers, fruits, coffee, gems, and precious metals … the Earth is our primary resource.” Merely visiting Colombia to cycle myself, I followed up, asking about tourism. His smile faded, and he said, “Not so much. Not like Peru or Ecuador, who have built a stable economy from tourism.”

Stories of the FARC and Pablo Escobar have left a bloody trail through Colombia’s history. Nearly 20 years have passed, but the storied exports of narcotics and terror continue to haunt Colombia. In reality, it hasn’t been all that long since the FARC penned a ceasefire (the official disarmament was signed just 2 years ago, in 2017). Along our route, we would pass burned-out drug dens, scorched by the government and left as a visual warning to others to think twice.

But that was then. Ortiz followed up, “Things are turning around — slowly. We’re still about 10 years out from tourism fully catching on.” 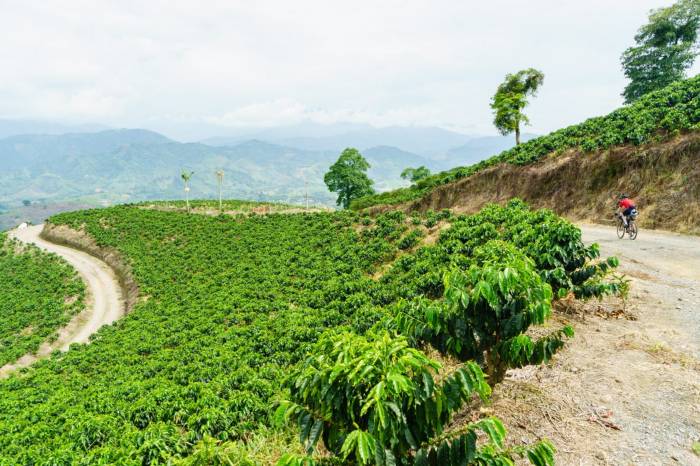 Back in Marsella, we put our coffee down, pedaled out of town, got lost exploring a family-owned finca, and traded smiles with the local farmers harvesting red arabica cherries by hand. Colombia may not be the place you think it is. Not because of its mistaken history, but because its history has shackled it from becoming discovered. Throughout our ride, we ate fantastic food, shared the backroads with the occasional Jeep Willys belching their way up the mountains, cupped fantastic coffee, and pedaled some of the best damn roads I’ve ever ridden.

I planned for the climbs, knew about the palms, and understood our route. But in Colombia, everything is richer, amplified with more volume. It’s something I couldn’t have planned for or anticipated. In other words, if you’re looking for adventure — real off-the-instagrid fun — get there quick before everyone else catches on.

If you’re visiting Colombia for the cycling, plan your trip in the Colombian “summer”: December to February and July to September. The rainy season, their “winter,” picks up at the end of March and runs through May, as well as October through November.

Tempted to go during the offseason? Repeat after me: 10 feet of rain. The rainy season is when the coffee harvesting begins. Fresh beans can be indulged at the end of the rainy seasons.

Traveling to Colombia is affordable, costing less than travel to Central America. A round trip to Bogotá can be had for under $1,000, with daily flights out of Houston. 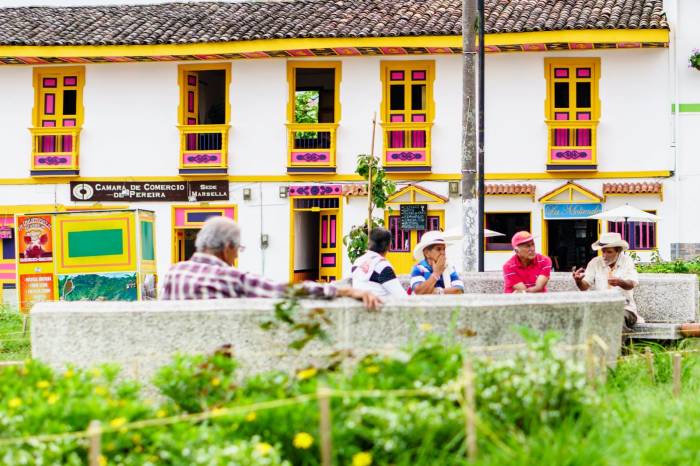 Hotel Salento Real Eje Cafetero. Salento, the once quiet colonial town sitting at the base of Valle de Cocora, has recently risen to backpacker stardom. But you should still visit if only to experience the Seussian wax palms in the Valle de Cocora. The Hotel Salento Real sits a few blocks off the bohemian boardwalk and offers large rooms and great food from the adjacent rooftop restaurant that overlooks Salento.

Hotel Spa La Colina. Sitting at the end of the road and behind a locked wooden gate, it distinctly feels like walking onto the set of “Romancing the Stone.” The hospitality is exceptional, the rooms are luxurious, and the food is sumptuous, only to be topped with amazing views. If you ride into La Colina, treat yourself to a massage. The cricket and thunder soundtrack? It’s not on tape, it’s streaming in real life.

Paraíso Verde Manizales was originally a home for young unwed mothers but was recently purchased and converted into an ecolodge. Only 3 km away from bustling Manizales, Paraíso Verde is tucked away in a steep valley overlooking the other direction, toward a lush cloud forest populated with the boldly colored toucan barbet. While the food here isn’t as great as La Colina’s, the views more than make up the difference. Paraíso Verde also puts you within a short taxi ride from the start of the storied Alto de Letras climb. 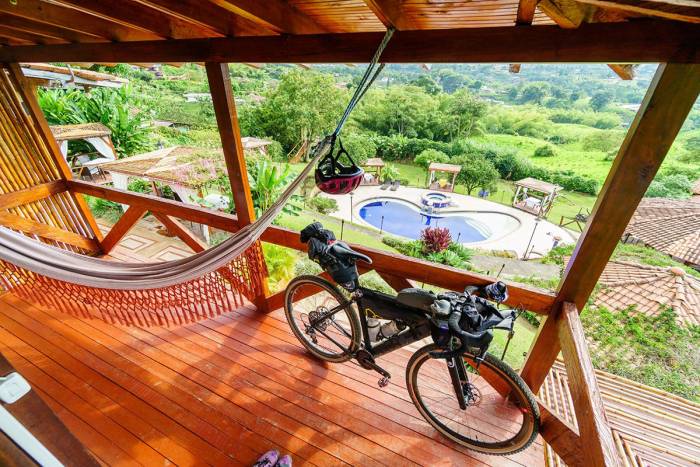 Gear for a Colombia Bike Tour

A mashup of gravel and adventure, 3T brought skinny to new levels with its Exploro. Billed as the top choice when you want to go anywhere fast, the Exploro embraces designer Gerard Vroomen’s pedigree for speed, but with a more relaxed geometry and girth for fat tires. It’s highly capable for long hauls in the saddle on tarmac or gravel.

Look chic while suffering. Café du Cycliste mixes fashion and sublime with subtle hues and poignant design. The Solenne Hoodie is perfect for the crisp, thin air on Alt de Letras and is plenty comfortable while buffering the chill traveling in coach.

Where aesthetics and performance converge, London-based Quoc cobbles shoes that simply fit feet and look good. And now Quoc offers a gravel-friendly shoe with its recently released Gran Tourer. Pro tip: Take the time to actually measure your foot instead of going with your traditional last size.

Blackburn’s already-popular Outpost bike pack series is now lighter and more durable. The Frame Bag comes in four sizes, fitting almost every frame, and can swallow a 3L bladder with room for a drone. The seat bag has a rigid frame that bolts to your saddle, allowing users to easily remove the compression drybag. Bonus: It’s dropper-seat-friendly for those on the up and up.

The sun rises and sets on the sixes on the equator. So if you plan to go long, lighting is mandatory in the dark cloud forest. But because being seen is sometimes more important than being able to see, we kept the lights on throughout the day and quickly recharged them each night.

Saving…
Singletrack Minds: How 1 Man and 2 Bike Brands Shaped an Industry
This Convertible Mountain Bike Helmet Sold Out in 2 Weeks
×