Like us, you may have never heard of Black Canyon of the Gunnison National Park. Named after a 2,200-foot-deep Gunnison River chasm, the park quickly earned our respect as one of the rawest, most scenic places we’ve ever been.

Not for the fainthearted, the Black Canyon is home to Colorado’s tallest cliff, nearly twice the height of the Empire State Building. Early explorers declared the vertical canyon impassable until a fearless duo (Abraham Lincoln Fellows and William Torrence) ran its 48-mile length atop rubber mattresses over nine grueling days.

For over 66 years, it was preserved as a national monument, known mostly by core climbers and kayakers. In 1999, it became the 55th national park, a move that put it on the map for intrigued travelers.

National park status protects the deepest 12 miles of the Black Canyon. But the Park Service only maintains a few trails and scenic overlooks along the canyon rim.

Everywhere else — the canyon walls, the rushing river, and the precarious cliff-hanging routes to the water — is designated wilderness and left intentionally untamed. Park rangers strongly warn against climbing or kayaking if you’re not a professional. And they encourage day hikers to bring overnight equipment just in case.

Visitors can play it safe by driving the 7-mile South Rim Road and stopping at overlooks. But to really experience the canyon, you’ll want to get from its rim to the river. 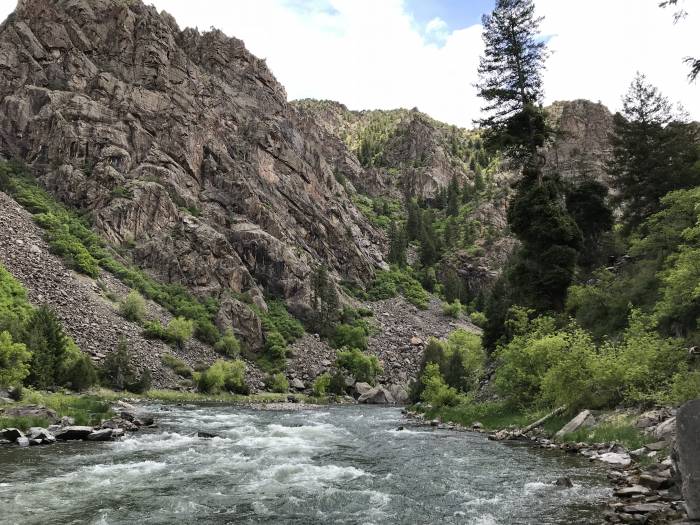 With plans to visit the canyon in mid-May in a 38-foot school bus-RV, we opted to reserve a campsite in advance on recreation.gov. South Rim Campground is an 88-site campground in Black Canyon of the Gunnison National Park. Loops A and B are reservable, while Loop C is available on a first-come, first-served basis.

When we arrived, Loops A and B were full, and Loop C started to cram as the weekend rolled around. Consider booking a site six months in advance to guarantee a spot between May and October.

We stopped by the visitor center and quickly learned about the wilderness permits required for any hikes into the canyon. The Wilderness Map they gave us, different from the standard park map, helped us tremendously in planning our canyon hikes and backcountry outing.

There are two sections of the park: the more popular and developed South Rim and the cross-canyon North Rim. There is no bridge across the canyon, so accessing the other side involves a two-hour drive.

The North Rim has a ranger station, a few rim trails and overlooks, several wilderness hiking routes down into the canyon, and a 16-site first-come, first-served campground. We spent time at both rims.

1. Backcountry Camping on the Canyon Floor (S.O.B. Draw Route From the North Rim)

From the North Rim Chasm View, you can lean over a railing and stare 2,200 feet straight down to the rushing Gunnison River. It’s staggering. From the top, the river looks like a creek, the trees like shrubs. But it’s difficult to comprehend the true height of the vertical walls until you descend to the waters below.

Taking a ranger’s advice, we opted to descend the North Rim’s S.O.B. Draw wilderness hiking route for a night spent enveloped by the canyon. It descends (and then ascends on your way back out) 1,800 feet over 1.75 miles. Expect steep scree, a plethora of butt-slides, and, on the way up, exhausting high-knee steps.

The route is unmarked save for a few cairns. Your objective is clear, though, as you enter a steep wash and intuitively follow it down to the river. Once we reached the bottom, we had to yell above the roar of the ferocious Gunnison River.

Note: The S.O.B. Draw route is notorious for poison ivy, and for good reason. It’s rampant and seemingly on steroids down there. Though you can do your best to jump over it or scramble around it, there are spots where it’s virtually unavoidable. Dress appropriately.

Then, we scrambled a few miles along its banks over to the base of the Painted Wall, as the emerald-green waters catapulted over boulders.

The Painted Wall is the iconic feature of Black Canyon of the Gunnison and also the tallest cliff in Colorado. It’s a towering, vertical rock face, with a nice rocky beach at its base that’s seemingly “painted” with pink streaks of igneous pegmatite rock.

We spent a day on the South Rim visiting each overlook, returning to Sunset View at dusk to watch the canyon turn black and the distant sky a blinding orange.

Exclamation Point overlook alone (accessible via a 3-mile roundtrip hike), makes the visit to the North Rim worthwhile. It’s a plunging canyon view split in half by the emerald-green river.

3. Down By the River (Gunnison Route, Devil’s Backbone) 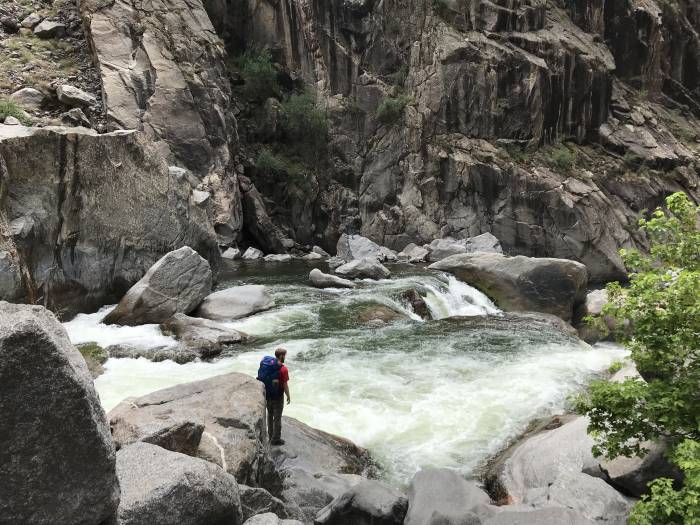 Getting down to the water is a must. The most accessible way is via the steep 16-percent grade East Portal Road. It ends at the river where a dam mellows out the water and kayakers and fly fishers abound.

From there, the wilderness-hiking route Devil’s Backbone begins, ambling along the river and up and over an exposed 400-foot ridge. Once on the downstream side, we saw no one and ate our picnic with a top-notch view. 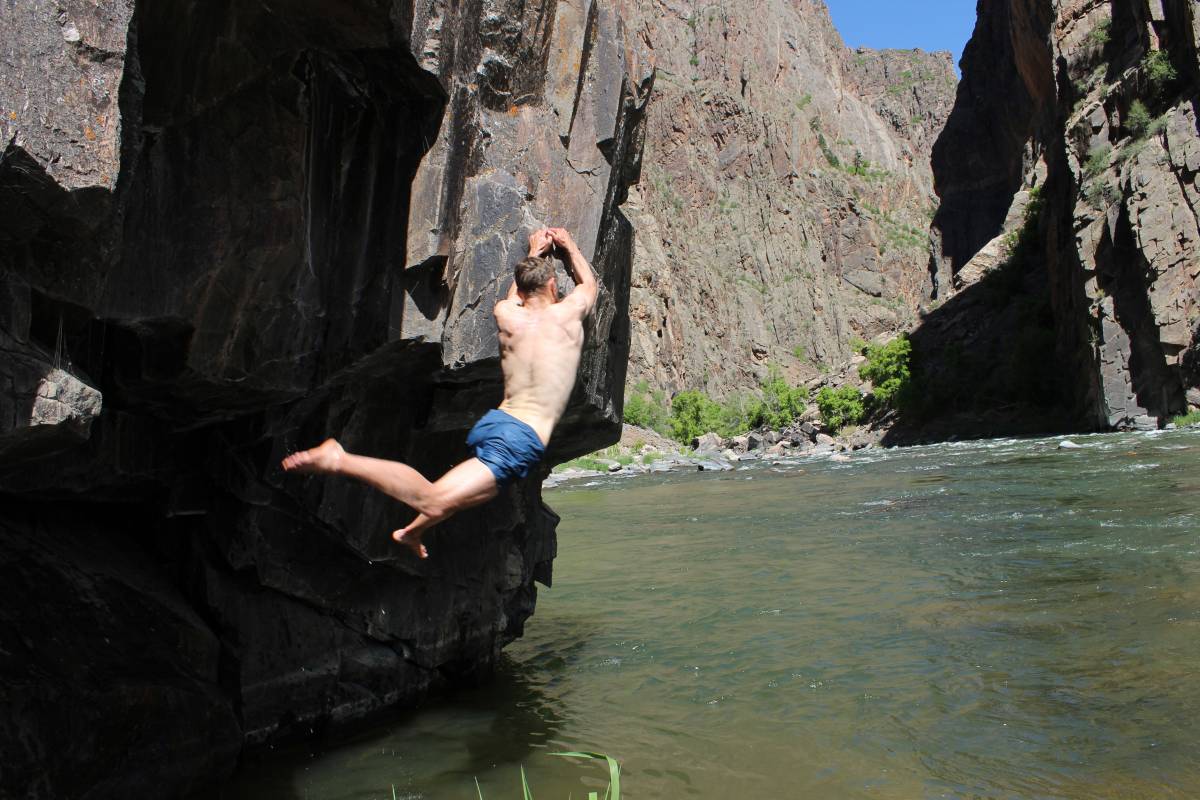 The Gunnison Route, another wilderness hiking route, begins at the South Rim Visitor Center and is the most popular adventure into the canyon.

The route descends 1,800 feet over the course of one mile, assisted at one point by an 80-foot chain alongside a particularly steep section. Once down, there’s about a mile of river access to explore, several backcountry campsites, and cold-water pools to dip in.

Visiting Black Canyon of the Gunnison: Tips and Tricks

Visit the North Rim. Though it’s more primitive (dirt roads and no visitor center) and a bit out of the way, the view from Exclamation Point is reason enough for the visit. The walls from the north side are steeper and the overlooks more breathtaking (literally). There are several wilderness hiking routes down to the river bottom, including the S.O.B. Draw route from which you can access the base of the Painted Wall.

Another bonus, permits are self-registered at the ranger station on the North Rim, so you won’t come across sold-out permits. 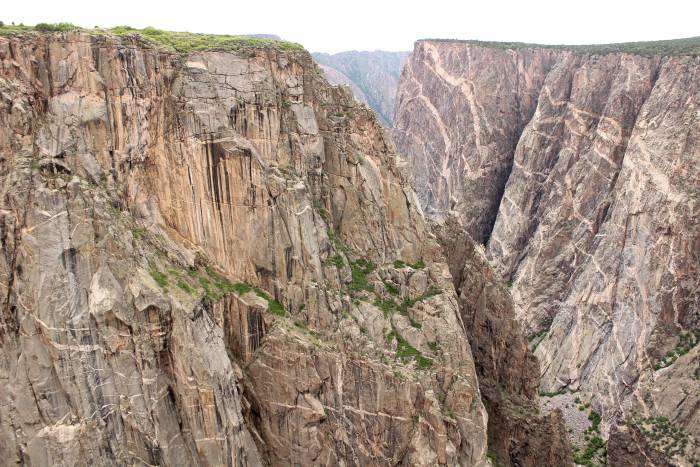 Space out your activities, especially if you plan to hike down to the river. A one-mile route may seem like nothing, but it can easily be sufficient for the day once you descend 1,800 feet, hang out by the river, and then ascend 1,800 feet back up. Plan to spend time in the canyon, enjoying the sights and sounds with a picnic. 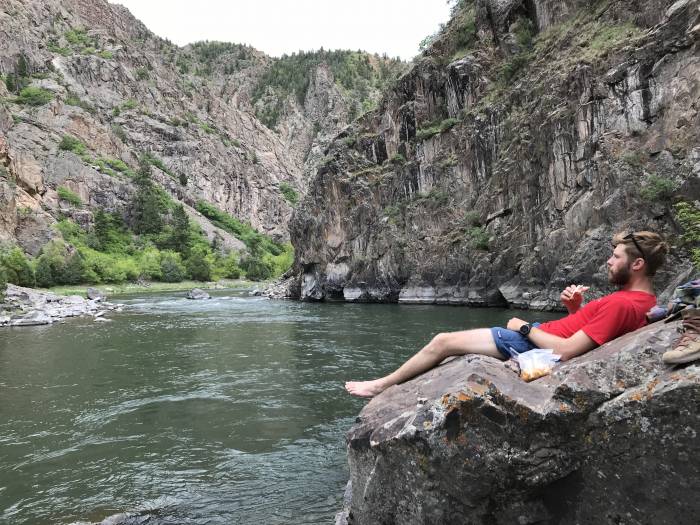 The canyon is known for its abundance of poison ivy. “Leaves of three, leave it be.” Wear long pants or socks to protect your legs and have some poison ivy soap handy. On some routes (Gunnison Route) it can mostly be avoided, but on others (S.O.B. Draw) it’s everywhere.

If you’re a fly fisher, bring your gear. We saw many fishermen down by the river, especially along the mellower, more accessible sections at the end of the East Portal Road.

What We Wish We’d Known

Wilderness permits are taken very seriously at Black Canyon. Every single wilderness hiking route down into the canyon requires a permit (day hiking included), and signs and park rangers offer plenty of reminders. Only the Red Rock Canyon route is available for advanced permit reservation, while the other seven route permits are available in limited quantity on an exclusive first-come, first-served basis.

To secure a permit, plan to arrive at the visitor center before they open, especially during peak visiting season. We arrived at 9:30 one morning, an hour and a half after opening, to find all the Gunnison Route permits taken. We opted for an available Devil’s Backbone permit that day and returned earlier the next morning for the Gunnison Route. 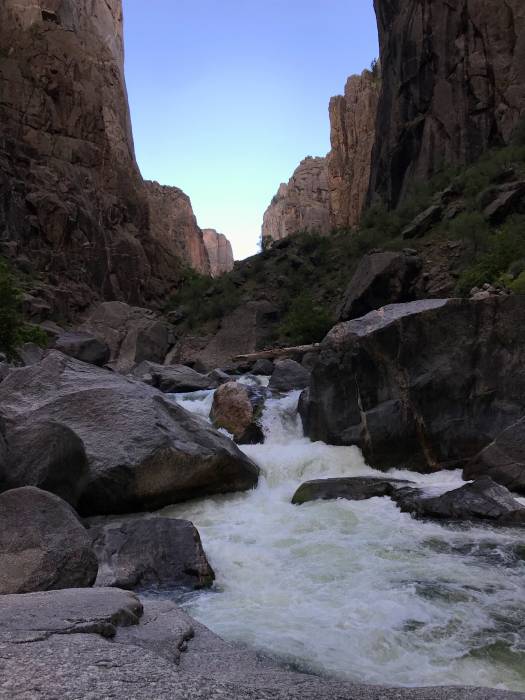 There are two driving routes from the South Rim to the North Rim. The quickest route — west on U.S. Route 50 and north through Montrose, Colo. — takes about two hours. The other, east on U.S. Route 50, is more scenic but is 7 miles and about an hour longer.

If you’re not a professional or extremely skilled rock climber or kayaker, don’t plan on doing either activity within park boundaries. The Gunnison River is class III-V, and climbing routes are technical, little used, and challenging.

The intimidating nature of Black Canyon of the Gunnison National Park is fundamental to its allure. Steep walls and an unforgiving river provide grandeur that’s difficult to match. Go, descend into the Black Canyon, and see for yourself.

Up Next: Unbound Adventure: 10 Activities to Get You Out There

Saving…
Unbound Adventure: 10 Activities to Get You Out There
Gunner Kennels: The $500 Dog Crate Worth Every Penny
×