Home » Travel » Sleep in a Portaledge: LOGE’s Outdoorsy Hostel Expands Across US

Made-for-outdoors ‘camps’ are the heart of the LOGE formula. LOGE converts motels to adventure destinations with equipment rooms, free bikes for use, RV hookups, tent platforms, hostel buildings, and gear for demo or for purchase on site.

A road trip across the Pacific Northwest this past summer landed my family and me at two LOGE Camps. We surfed Pacific waves while staying at the Westport, Wash., location. Each night, we dried wetsuits in a lux gear room off the lobby. In Leavenworth, despite unexpected heat, my crew biked, hiked, and jumped in the Wenatchee River to cool down at day’s end. 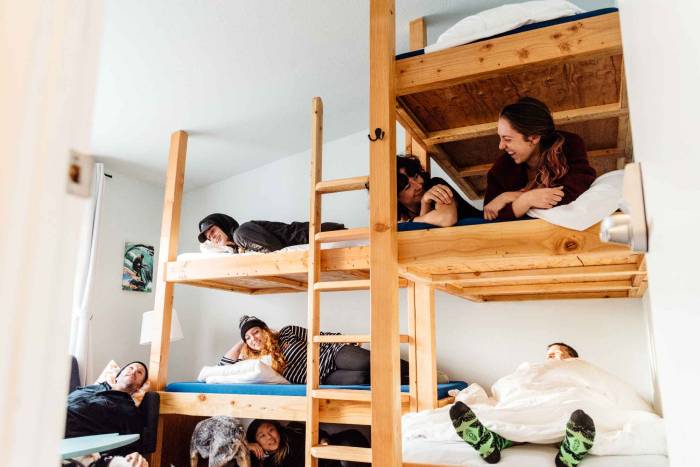 This fall, I toured the Bend, Ore., LOGE. It was similarly tuned exactly for the outdoors set all the way down to the bike-repair station and hammocks in the rooms. Oh, and some of Bend’s best singletrack trails stream to all compass points from the newly opened location.

LOGE (pronounced “lodge”) this week announced a major expansion and new funding for the company. In 2019, it will double its footprint, opening destinations in California and Colorado. 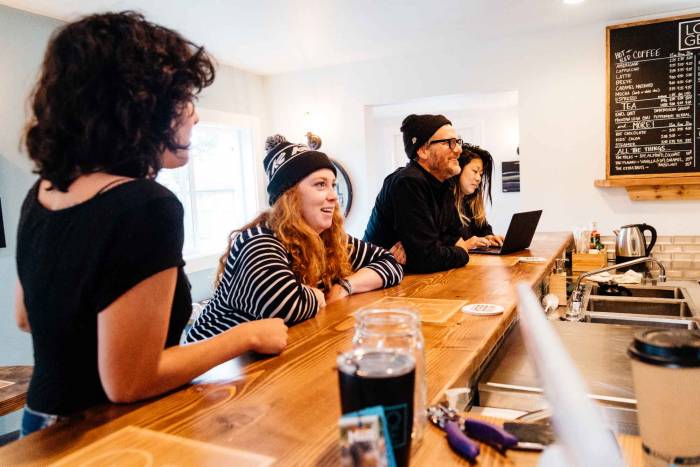 Eight of the hotel-campground amalgams will open by the middle of 2019. This puts the company on track toward nationwide expansion in the years ahead.

“We have no background in this — or no network with money,” said Cale Genenbacher, co-founder and president of LOGE, in a phone interview. He was referring to the fact that the startup has raised about $6 million. It now boasts a board of directors with some big outdoor-industry names and plans to procure millions more in funding to grow.

LOGE began with a Kickstarter campaign that garnered $30,000 in early 2017. Since then, Genenbacher described sleeping in his truck while scouting locations and the “thousands of phone calls made” by he and co-founder Johannes Ariens over the past two years.

Soon, new LOGE Camps will open in Breckenridge and Estes Park in Colorado, and at Big Bear and Mt. Shasta in California. Current locations include Westport, Snoqualmie Pass, and Leavenworth in Washington state as well as a property in Bend, Ore., at a hotel formerly known as the Entrada.

Relinquished motel properties converted into oases of outdoor recreation is the theme for most LOGE projects. This means general fix-up and modernization of neglected properties to create what the company notes are “overnight hotel and camping accommodations catering to surfers, bikers, hikers, adventurers, and all outdoor enthusiasts.” 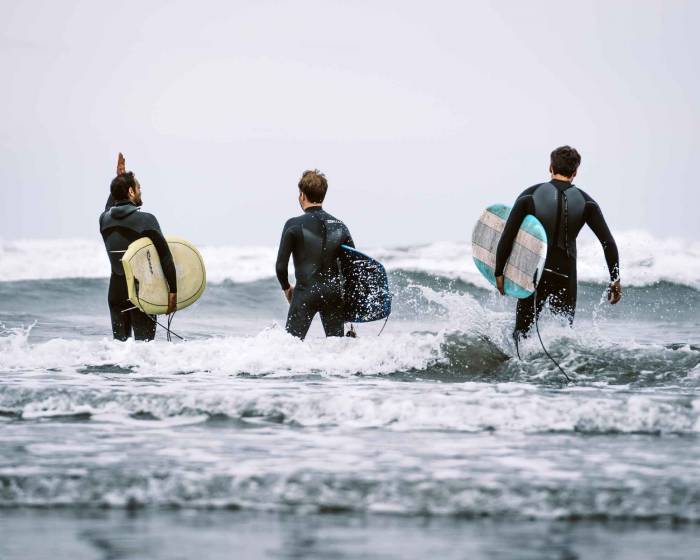 The company is based in the Seattle area. As the story goes, founders Ariens and Genenbacher saw the growing popularity of people flocking to the Pacific Northwest for mountain and ocean outdoor recreation. However, there were little-to-no lodging options once on the coast. And prices were not affordable at many mountain resorts. 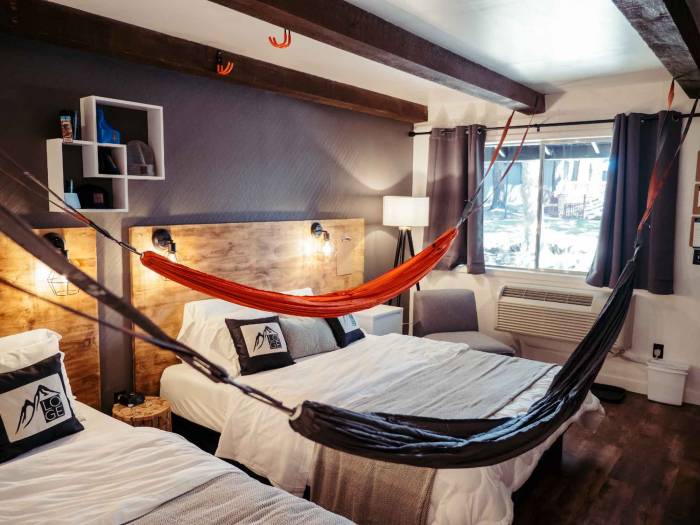 So the co-founders conceived a new template. LOGE would offer people options to stay in individual rooms, hostel-style buildings, or camping spots. Prices were to be about $45 and up.

“The direction of travel in the outdoor and active lifestyle space is luxury,” Genenbacher said. “However, most consumers simply can’t afford the luxury they are looking for.”

He continued, “A $500-per-night room is the norm in many ski towns, and it can be thousands of dollars to ski for a family weekend in many resort towns — that is just B.S.”

My family grabbed a cabin in Leavenworth at $125 per night. It was immaculately clean and comfortable, with fresh paint and new fixtures and furniture. And it was filled with gear and adventure-themed art and accouterments! 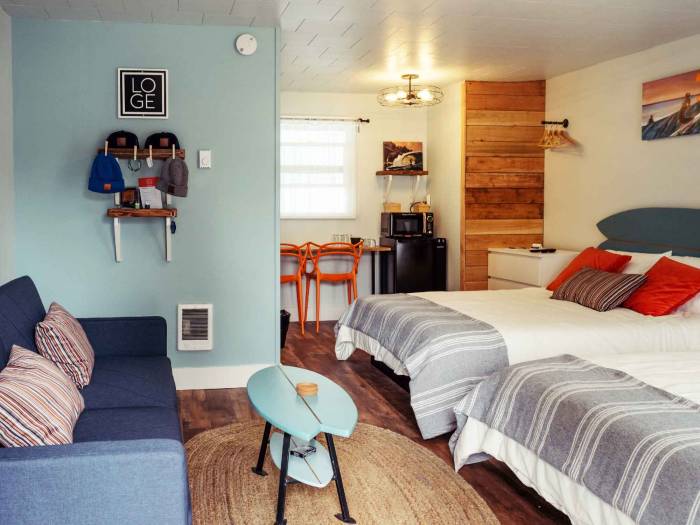 As such, the cabin served as a perfect base camp for a weekend of adventures.

Our small patio overlooked a river, and trails into the mountains were reachable nearby.

Beyond the price game, LOGE provides a template to touch and feel (and purchase) gear right from your room.

A partnership with retailer evo integrates gear throughout all the properties. This includes Raleigh bikes and Black Diamond headlamps. YETI coolers serve as coffee tables in some rooms.

I climbed into a Black Diamond portaledge in the Leavenworth hostel; they double as bunk beds. At LOGE Entrada in Bend, Ore., rooms are adorned with Kammok hammocks, which swing above all the beds. 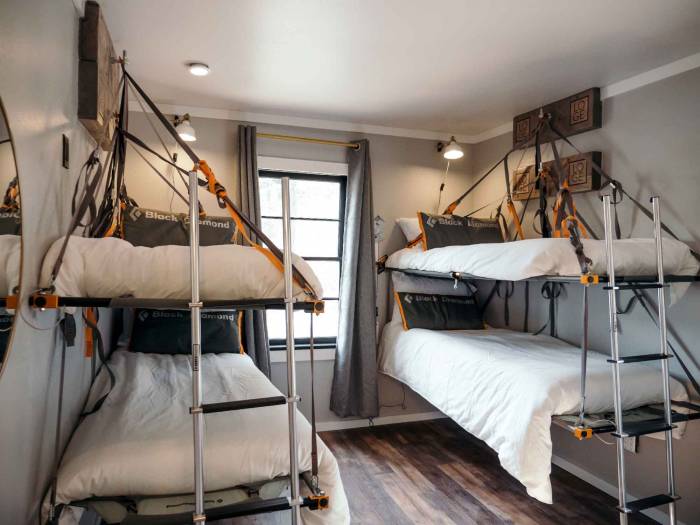 I took advantage of the demo bike in Leavenworth. For surfing in Westport, we rented boards and then sprayed down wetsuits near the lobby at cleaning stations. They hung to dry in an immense heated room whirring with fans at night.

Beer and coffee as well as cafes, kitchens, couches, and even board games on shelves in communal areas create places to chill throughout the LOGE network. Outside, strung lights, fire pits, paths, and stages for live bands and movie nights combine for an aesthetic somewhere between summer camp and a millennial-era music fest.

I drank the LOGE Kool-Aid while in Washington state. The equation of fair-priced accommodations, a choice of sleeping arrangement (from campsites to private cabins), and gear all around seemed tailor-made for me and my family.

The company is reporting revenue success now heading into its second year of operation. 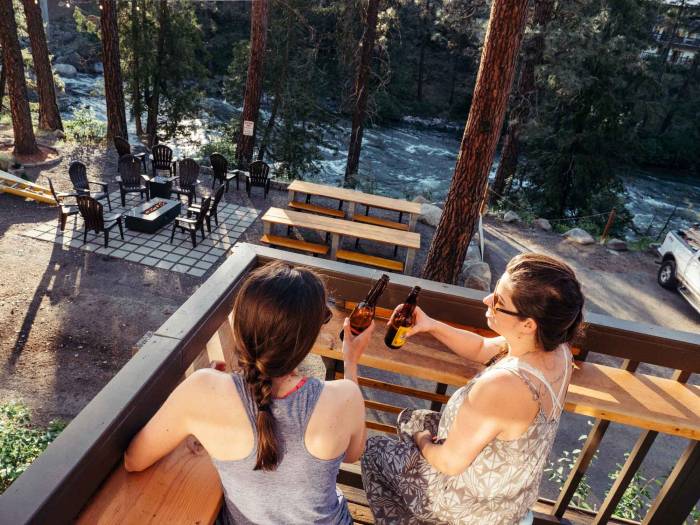 To keep the momentum, LOGE has built a board of directors it says is an “unparalleled outdoor industry team.” This includes individuals from evo, Diamondback, Nuun, OR, Miir, Raleigh, Smith, Moment Lenses, The Seattle Bouldering Project, K2, POC, Booth Creek, and Eddie Bauer.

Dan Nordstrom, Steve Meineke, and Steve McCallion comprise the advisory board, while LOGE Camps’ governing board members include Bryce Phillips, Jamie Ikerd, and Jim Collis. From Outdoor Research, Hydro Flask, Chrome, and KEEN (and many more), these individuals have served in top positions around the outdoor industry.

They are now helping Ariens and Genenbacher grow their vision. I will be checking in (literally) on LOGE over the coming year to see the growth firsthand.