Home » Travel » Hiking in Olympic National Park: From Sea to Summit to Rainforest

Olympic National Park is one of the most diverse parks in the U.S., home to glacier-capped mountains, miles of Pacific coastline, and lush rainforests. On a seven-day blitz, we went backpacking in three different areas of the park to experience the wild variety it offers.

When my wife and I were planning our trip to Olympic National Park, we were overwhelmed by its immense size and the dearth of roads. What was easy to pick up on, though, is that Highway 101 essentially circumnavigates the park and provides access to its varied attractions.

We narrowed our backpacking plans to three areas that fit our criteria, keeping in mind they had to be relatively close to one another along Highway 101. And, most importantly, they had to offer a variety of nature. We picked one route with summits, one along the coastline, and one in a rainforest. 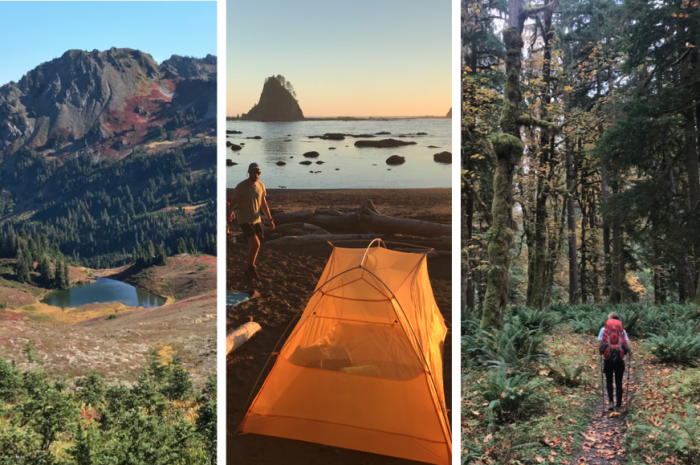 If you’re looking for a quick and wildly diverse visit to Olympic National Park, here’s what you can expect and a few tips to make the most of it.

In the Sol Duc area of the park sits the Seven Lakes Basin. And circumnavigating it winds the 18.3-mile High Divide Loop Trail. The Sol Duc Trailhead at the end of Sol Duc Road provides access to this loop as well as the picturesque Sol Duc Falls. Some choose to day hike the 18.3-mile High Divide Loop while others take it easier and spend a night or two along the rim of the basin.

It’s worth noting that the designated camping areas along the loop trail are extremely popular and can be reserved in advance. And only a few first-come-first-served permits are available on a walk-up basis at the visitor’s center.

For this particular trip, my wife and I reserved a backcountry site in advance at Heart Lake. We did this mainly so we’d have peace of mind along the popular route.

Taking a park ranger’s advice, we hiked the loop clockwise. After a level first mile, we came upon the three-legged Sol Duc Falls. From there, we made our way 7.6 miles through a dense, mossy, fern-laden forest and along the rushing Sol Duc River to Heart Lake.

The lake, which actually is heart-shaped, is mostly above treeline and has commanding views of the nearby High Divide ridge. After a day spent gaining 2,800 feet of elevation under the shady canopy of trees, the Heart Lake area was a beautiful, well-earned place to spend the night.

The area has six campsites to choose from. When we arrived around 4 p.m. we had the pick of the litter. We chose site #4, which overlooked Heart Lake, had access to a nearby stream, and provided free dinner entertainment: a black bear scrambling down the distant ridge in front of us.

The next morning, we continued up to the High Divide. The ridge offers expansive views of 7,980-foot Mount Olympus and its many glaciers, other towering peaks, and the Seven Lakes Basin. And the basin is full of crystal-clear blue lakes and is surrounded by impressive, steep ridges.

We spotted two black bears foraging below as we continued along the basin ridge. Eventually, we topped out on Bogachiel Peak at 5,474 feet. We began our descent after taking in the 360-degree panorama, switchbacking down the ridge and into the red, orange, and yellow fall foliage.

The loop took us back to Sol Duc Falls after a long 9.1-mile day descending 3,000-plus feet. A mellow 1-mile trail brought us back to our car, where we ate a quick dinner. Our weary legs received much-needed rest during the hour-long drive along the Rialto Beach coast near Mora. We repacked our backpacks, dozed overnight in the parking lot, and woke up ready for a totally new adventure alongside the Pacific Ocean. 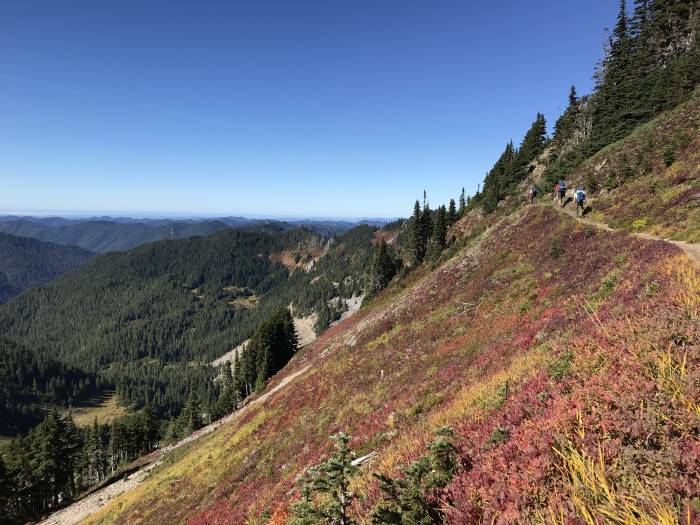 Olympic National Park protects 73 miles of Pacific coastline, including 23 wilderness camping areas. Though reservations are required to spend the night in a few of those camping areas, the majority of them aren’t reservable. And therefore, permits are always available!

To obtain the required permit for backcountry camping along the coast, simply visit any ranger station or visitor’s center in the park. You’ll complete the self-registration at the backcountry kiosk (open 24/7) and pay the fee of $8 per person per night. For coastline backpacking, there are convenient ranger stations at Mora and at Ozette.

We’d heard good things about the coast from Rialto Beach north to Norwegian Memorial. Plus, Rialto Beach was the most convenient trailhead option between our Seven Lakes Basin hike and Quinault Rain Forest hike. After our night spent in the Rialto Beach parking lot, we woke up and started north along the beach.

The tide chart we were given at the ranger station informed us the tide would be highest between 11 a.m. and 5 p.m. Along the coast, there are multiple points that require low tide to pass. With this in mind, and because we didn’t reserve a specific camping area, we figured we’d see how far we could get by 11 a.m. and then find a spot to camp before reaching the next tide point.

The first mile was on coarse, gray, hard-packed sand with waves rolling in on our left. The easy stroll took us to Hole-in-the-Wall, a prominent rock outcropping with a giant hole in it.

The tide was low enough that we could walk through the hole to the other side and continue our way along the beach. In the distant sea, there were handfuls of unique, steep rock formations jutting out of the water. It’s a coastline unlike any we’d seen before.

The next 2.4 miles were more strenuous. With the tide rising, we were forced to scramble on rocky headlands and walk on slick, seaweed-ridden rocks. The adventure was fun but taxing as we continued north.

A man heading south gave us a great tip about a hidden trail that meanders inland, avoids a treacherous boulder field, and exits via a fixed rope back onto the beach. That hidden trail was actually a highlight of ours, as it led through a forest so dense it felt like we were bushwhacking through the Amazon jungle.

Once back on the beach, we hiked a few hundred yards to Chilean Memorial, the second designated wilderness camping area along the coast north of Rialto Beach Trailhead. There we found the shade of a few trees as well as a rope swing, a fire ring, logs, and soft sand to sit on. Talk about paradise!

What’s more, we had the entire cove to ourselves, complete with magnificent views of sharp rock islands and the sound of crashing waves.

We spent the rest of the day relaxing, playing games, swimming in the cold Pacific, and gathering driftwood. As the sun made its way to the horizon, we cooked up a quick meal and started a campfire. With s’mores in hand, we watched the sun dip into the ocean and the last rays of light silhouette the rock islands in front of us. 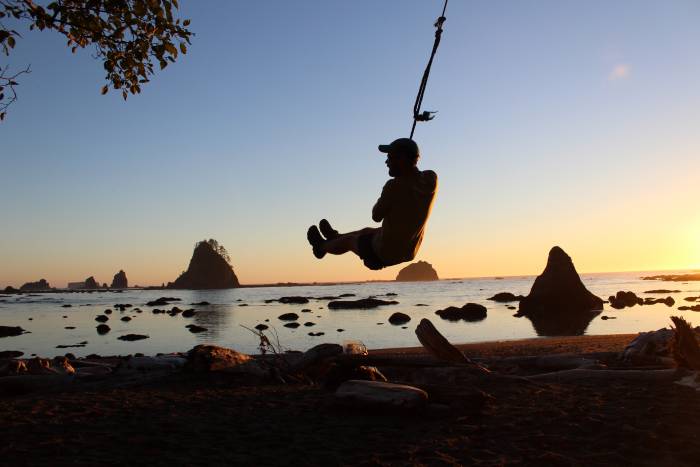 In the morning, the dawn colors were some of the most beautiful we’d ever seen. We packed up our gear, a bit wet from morning dew, and said goodbye to our cozy camp. The earlier start made for a much easier hike back south due to the lower tide. The 3.8-mile hike took us three hours to complete the day before and only two hours on the way back. 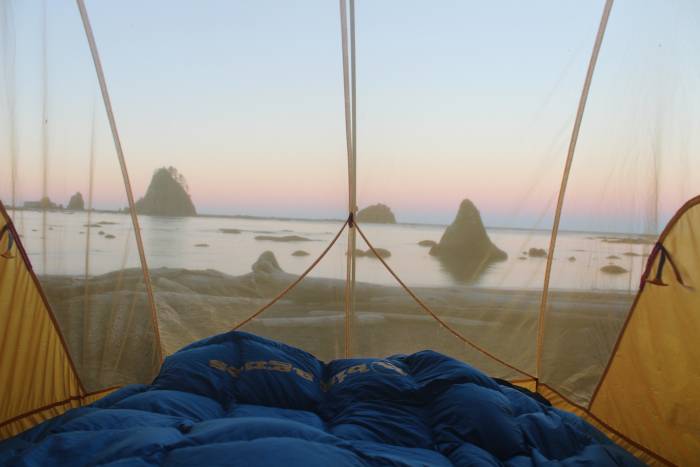 Back at the trailhead, we dried off our gear in the sunny parking lot, ate a picnic lunch, and began the 84-mile drive to the Quinault Rain Forest area and the Graves Creek Trailhead.

Along the way, we stopped in Forks, Wash., for gas and groceries, then again at the Quinault Ranger Station to self-register for our next backcountry permit.

Starting at the Graves Creek Trailhead is a hike that parallels the Quinault River and winds through the Quinault Rain Forest to the aptly named Enchanted Valley. If you continue on, it ultimately climbs to Anderson Pass and the nearby Anderson Glacier.

None of the wilderness camping areas along the route can be reserved in advance, and visitors must simply self-register at a ranger station (paying the $8 per person per night fee) and carry that permit with them.

After driving from our Pacific-coast hike that day, we arrived at the Graves Creek Trailhead. We spent the night in the parking lot and repacked our bags for a three-day, two-night rainforest adventure.

We slept in and set off after lunch, hiking 6.7 flat miles to the O’Neil Creek camping area. The hike was fascinating, featuring abundant ferns, gigantic old-growth trees with moss-covered limbs, and the ice-blue Quinault River close by.

At O’Neil Creek, we set up camp along the river and readied our rain gear as dark clouds rolled in. It rained steadily that night, only letting up briefly in the morning as we packed up our drenched gear.

From there, we hiked another 6.5 miles to the Enchanted Valley. This time, the Quinault Rain Forest showed its true colors, dousing us the entire way and enclosing us under a dark-green canopy.

Though the weather wasn’t great, the Enchanted Valley did not disappoint. We emerged from the dense forest into a valley filled with fall colors and tall, glacier-fed waterfalls. As we took in the view, we heard elk bugling nearby and spotted a group of them on the opposite shore of the river.

We set up camp near the old chalet, now a seasonal ranger patrol station. Then, we sat under our rain tarp and watched the surrounding 100-plus-foot waterfalls grow bigger and bigger. New waterfalls formed a few hours later, cascading down the steep valley walls. Though soggy, we were glad to experience a quintessential day in the rainforest.

It rained all night. In the morning, we packed up camp in the rain and set off to conquer the 13.2 miles back to our car. The trail from Enchanted Valley to the parking lot is quite flat, descending 1,385 feet over 13.2 miles.

We booked it on our hike down and made it back in five hours. From the Graves Creek Trailhead, we left the park and stopped at the first sunny parking lot we saw to dry out all of our gear. 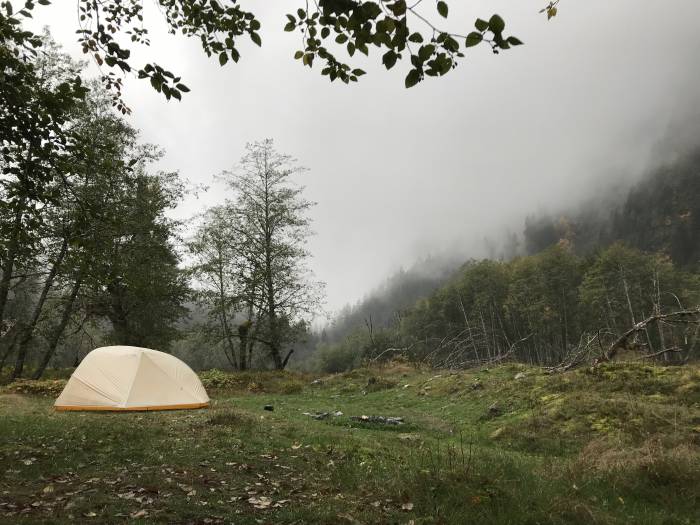 Though Olympic is such a huge park, we felt like we did it justice in the seven days we had. Split up into two days in the mountains, two on the coast, and three in the rainforest, our week was filled with variety that might be unrivaled in all the United States. We’d recommend all three backpacking trips, though the weather on our rainforest adventure did hamper the experience a bit.

The park is only a few hours from Seattle, but with its sparse crowds and pristine wilderness, it feels much more remote. It’s a backpacker’s paradise. Consider booking a trip and experiencing its diversity with an itinerary like ours, or pick an ecosystem (summit, sea, rainforest) and explore it more thoroughly.

If you plan on spending more than five nights in Olympic’s backcountry, you’ll want to buy the $45 Olympic Annual Wilderness Pass. With this pass, you can backcountry camp an unlimited number of times in a year without ever having to pay the $8 per person per night fee.

Up Next: Sherpa Trailer Blends Burly Build With Off-Road Luxury