Experience the power of nature in the epic book-turned-film ‘The Dark Divide.’

Robert Pyle fiddles with tent poles in the rain and chases butterflies in nothing but his underwear. He eats wild berries and falls into a river. He cries, he watches stars, and he follows his wife’s advice.

Pyle is the main character in “The Dark Divide,” REI Co-op Studios‘ latest film project. Without giving too much away, there’s vastness, hilarious mishaps, and epic moments of discovery.

The virtual film premiere will launch on September 18 on darkdividefilm.com. Read on for our review of this film from a movie- and outdoor-lover’s perspective, or watch the trailer here.

“The Dark Divide” is based on nature writer Robert Pyle’s book “Where Bigfoot Walks: Crossing the Dark Divide.” The storyline follows an account of Pyle’s 1995 journey across one of America’s largest undeveloped wildlands — Washington’s Gifford Pinchot National Forest, an area that spans more than 2,000 square miles.

Pyle, a butterfly expert who receives a Guggenheim grant, takes on a 6-plus-week adventure in search of new butterfly species and exploration of wild, undiscovered habitats. (And maybe Bigfoot, but you’ll have to watch to find out.)

“Over the course of his 6-week adventure, Pyle battles self-doubt, the grueling trail, and the people and creatures who call this forest home,” reads the film description.

The area is so deep and remote, there’s no cell service, no light pollution, and no sounds of planes overhead. But there’s plenty of bears, spotted owls, and other wild creatures. 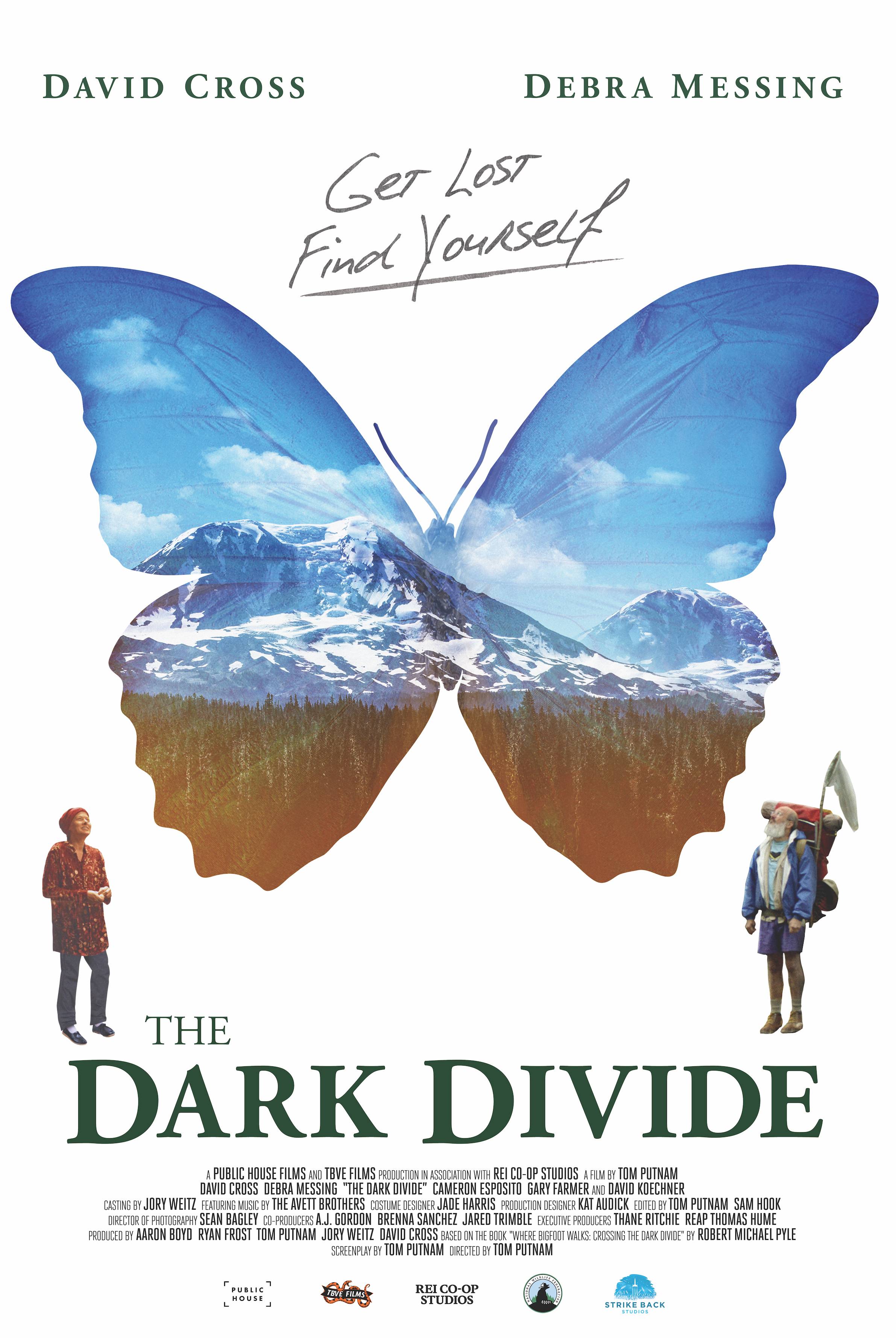 Why you should watch: Check out this film if you crave movies about exploration or you’re looking for a comical and honest analysis of the relationship between nature and humans.

Overview: The film opens with the main character running through a forest in the dark, a sense of someone or something chasing him, and a sense of adrenaline and impending doom. There’s a split-second growl.

I was ready for the film to jump into the action, the thrill of watching a probably unprepared man trek across an epic wilderness. Will he make it? Will he succeed? But no, the film takes a short step back to explain who the character is and what he’s doing in this predicament.

Our guide, and star, in this journey is an academic lepidopterist who has obviously never camped — much less navigated a depthless wilderness — a day in his life.

Cut to Pyle (played by comedian and actor David Cross) showing up in a small town as an obvious outsider. Picture a one-pump gas station, a rotating rack of cheap sunglasses, shelves of 3.2 beer.

There’s a chit-chatty and comical interaction between him and a gas station employee. This slightly awkward and humorous interaction brilliantly sets the stage for interactions Pyle will have with other characters throughout the film.

The film jumps back and forth across the timeline — before, during, and after Pyle’s journey. But it’s not difficult to follow.

“The Dark Divide” is a bit slow at first. There are moments where you’re left wondering, “What is actually going to happen?” However, the film features great cinematography. The camera angles are sharp, giving us an intimate and close-up look at Pyle.

Some scenes make it feel like you’re right with him on the trail. There aren’t too many secondary characters — the film focuses as much as possible on Pyle and the landscape he’s in. That being said, several scenes are dedicated to Robert Pyle’s late wife, who died of cancer. It’s crucial to the storyline but doesn’t pull the focus of the film.

The film’s tagline of “Get Lost, Find Yourself” is a bit hokey, but once you watch the film, the choice makes a bit more sense. For Pyle, it means you’re going to get lost, and you’re going to discover something, even if it’s not what you set out to do. No matter what, you’ll end up somewhere on the other side.

Reading the film background, it was cool to note that the crew shot in the same locations the real Pyle traveled through. His character carries an old steel-frame pack and gear that looks accurate to the time period.

At the very core of the film, it’s about exploration, whether that’s exploring nature, ourselves, or life.