Home » Winter » Mundo Trailboard Is a Skateboard for Snowy Trails

Mundo introduces the Trailboard — a high-performance, bindingless snowboard designed to take on hikes and ride on any type of snowy terrain, whether it’s a resort, a trail, or your own backyard.

Snowboarding hit the mainstream in the 1990s and grew steadily until plateauing in the mid-2000s. But participant numbers have declined over the past five years, according to the National Ski Areas Association. Contributing factors include expensive equipment costs, a high barrier to entry, and rising injury rates.

Loosely based on the concept of the Snurfer — essentially a wooden plank with a rope attached, a predecessor to the snowboard — the Mundo Trailboard is touted as a bindingless snowboard option that’s easy to ride, affordable, and accessible. The design is simple and portable, but the brand claims Trailboards provide for more control than similar products on the market.

Mundo Trailboard: How It Works

Trailboards comprise a lightweight foam core, sintered Ptex base, and steel edges for carving packed snow. The base is narrower than your feet, which provides for heel and toe leverage when turning and stopping — like on a snowboard. A unique kick-tail feature increases maneuverability and creates an opportunity for performing tricks (attention: skateboarders).

An average snowboard with bindings weighs about 12 pounds — more than twice as much as the Trailboard, which weighs 5. Besides being lighter, the Trailboard is also shorter, reported as 114 cm in length. These two factors make the Trailboard easy to transport. An integrated safety leash prevents it from sliding away.

Unlike a snowboard, you don’t need special boots to ride the Trailboard. Any shoes will do thanks to studs that keep your feet from slipping, but Mundo recommends waterproof hiking boots for best performance.

Hike to Slide on Trails

If you’ve ever watched someone learn to snowboard, you know it can be painful. They’re going to inevitably end up on the ground and risking injury from trying to catch themselves. 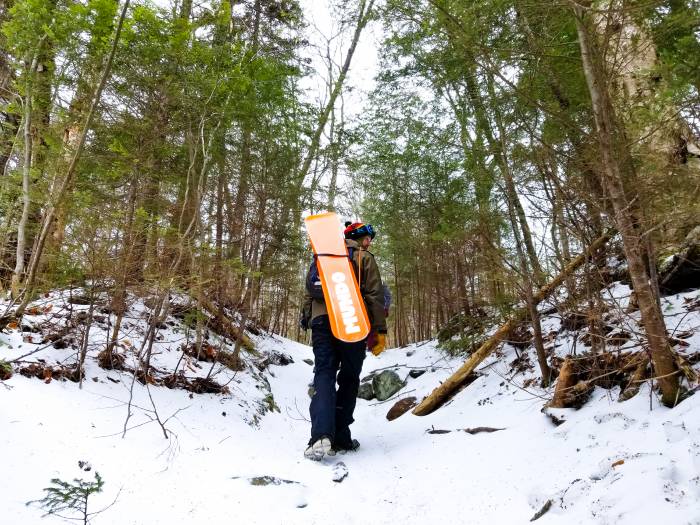 “You don’t have to go to a resort and pay someone to learn how to snowboard,” founder Chris Pembridge told GearJunkie. “You can take the Trailboard out into your backyard and learn how to balance, stop, and carve turns. When you can just step off the board if you start to lose your balance, it gives you confidence. To me, it seems like a safer way to learn.”

Pembridge views the Trailboard with a longboard mentality, as more of a form of transportation than a sport. He highlights the increase in freedom to do things at your own pace and location — whether it’s your backyard, a hiking trail, or a ski resort. While some ski resorts have regulations on using bindingless snowboards, Trailboards are generally allowed anyplace you can bring a snowskate.

“We envision Trailboarding as this new movement, a new sport that combines hiking and snowboarding — with the Trailboard serving as a byproduct,” Pembridge said. “We want to get it into people’s hands and see what they can do with it. The possibilities are endless.” A $319 pledge on Mundo’s Kickstarter campaign page means you’ll be among the first to get your hands on a Trailboard.

Up Next: Skiing in Japan: Tips, Tricks, and Must-Pack List

Saving…
Skiing in Japan: Tips, Tricks, and Must-Pack List
Skier Stereotypes Video: Which One Are You?
×