How determined would you be to ride the Grand Capucin southeast couloir without coffee? You’re probably not as hell-bent as Nikolai Schirmer and his buddies.

Schirmer set out with his crew, including Jacob Wester and Joonas Mattila, before sunrise. The Norweigan filmmaker and skier wanted to attempt to ride the Grand Capucin couloir running down the spectacular granite pinnacle of the Mont Blanc massif bordering France and Italy.

The team of masochists embarked from the Pointe Helbronner hut at an elevation of 11,358 feet in search of the Grand Capucin southeast couloir. They had to negotiate a maze of crevasses dangerously covered in deep, fresh snow, in subzero temperatures. All the while, fierce winds were also blowing at them from all sides.

And, as if that wasn’t bad enough, Schirmer, Wester, and Mattila did it with zero sleep. But worse yet, they did it un-caffeinated.

Although the film doesn’t quite end how you’d expect it to, you’ll have to watch The Hardest Earned Coffee in Italy to find out for yourself. Do they manage to cross a minefield of crevasses safely? Do they ever get to ride the southeast couloir? And what about enjoying that cup of Italian coffee they’ve been dreaming about since they took the day’s first steps?

Schirmer takes us on an un-caffeinated journey in the third episode of Topside. Grand Capucin doesn’t look like a tour for the faint of heart. 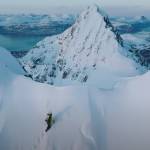 Snowboarder Antti Autti takes on greater challenges on and off the mountain in his upcoming project, Arctic Lines: Twenty. Read more…