Designed in the U.S. for North American skiers, Atomic’s newest skis deliver epic days in all conditions on all terrain.

Atomic is making big promises for the 2021-2022 season, with a new range of skis made by — and for — North American skiers. After 3 weeks of testing, we can confirm: Boy, do Atomic’s new skis deliver!

When Altenmarkt, Austria-based Atomic committed to a new range of all-mountain skis for the North American market, it started with a blank slate, considering what makes skiing in North America different from skiing in Europe.

The brand also committed to testing in the U.S. and Canada to make sure it was on the mark. Atomic pledged to ditch the bro-tastic culture and common freeride jargon and focus on what matters — helping skiers have a great day on the hill.

In short: The new Maverick and Maven skis are sure to deliver on Atomic’s goal: create a ski that can tackle every inch of a mountain, specifically those in North America. From frontside blue groomers to steep gullies and the back bowls, the Maverick and Maven rip. The skis hold an edge well, are stable at speed, and delivered on all sorts of terrain nonstop. 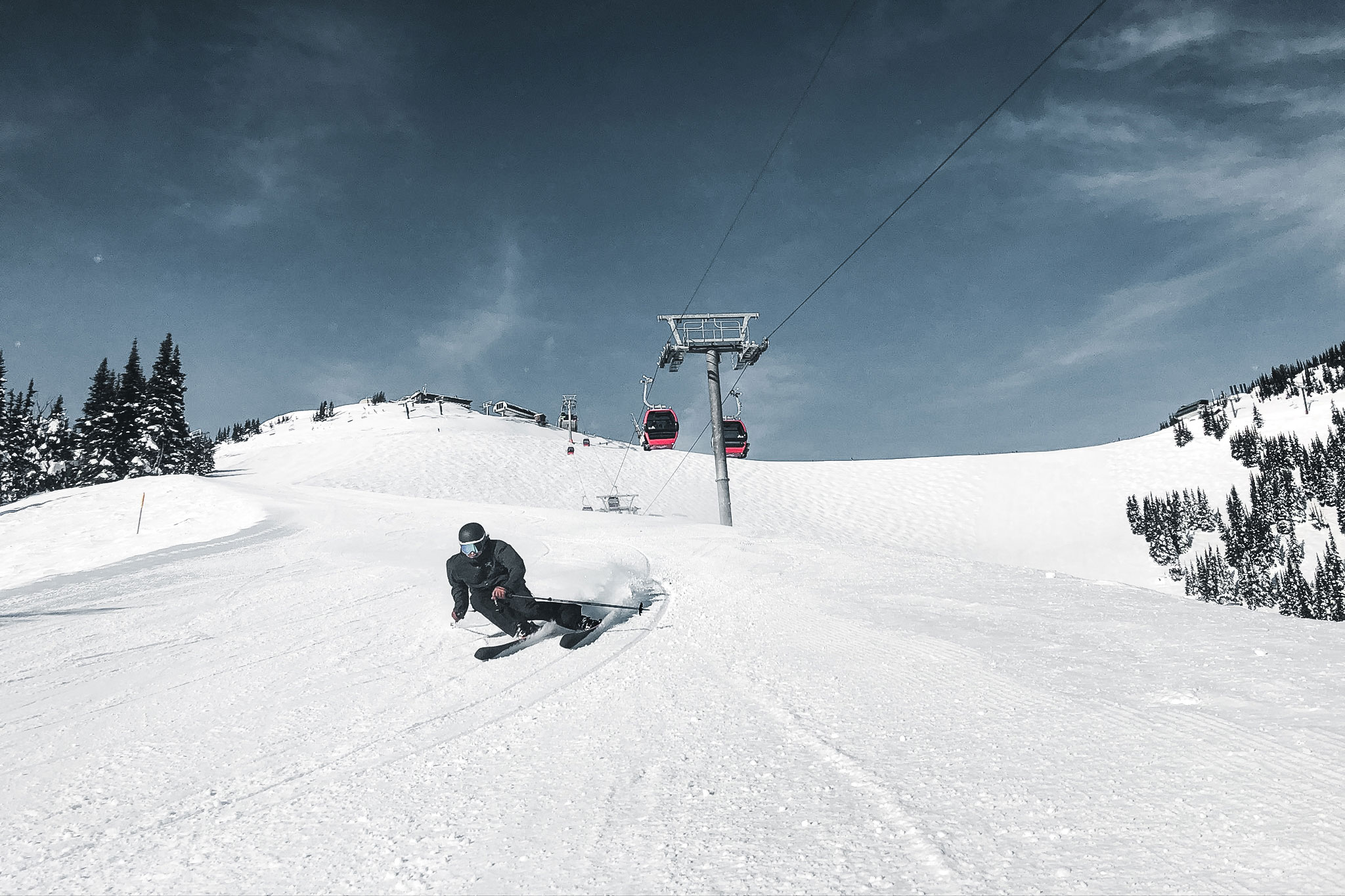 From Concept to Chairlift

Atomic assembled a test team of 60 skiers that included consumers as well as influencers, ski pros, shop employees, and staff to help the brand work out all the details. Atomic prototyped a whopping 145 skis, finally settling on five men’s models and four women’s that will help blue-square through double-black-diamond skiers have a killer day in almost all conditions and terrain.

A lot of so-called “all-mountain skis” are notably frontside-focused. A few excel off piste and can hold on when pointed down a hardpacked groomer. The Maverick — I tested the 95 Ti in 180cm — is a true one-ski quiver for someone who wants a ski for every nook and cranny of the resort.

And Atomic faithful take note: The Maverick and Maven line will replace Atomic’s existing Vantage series, which will phase out at the end of this season. The new Maverick/Maven series weighs less, turns better, and outperforms the Vantage skis in deeper snow.

After each of my runs, over several weeks of testing, I peeled off my boots knowing I’d just had one of the best days of the season. And rarely was it thanks to the snow conditions. The Maverick skis were playful and agile. I rarely thought about what was on my feet as I swooped through fluffy tree runs, carved aggressively on open groomers, and skipped over technical bumps.

The ski held an edge on Stowe’s black diamond Nosedive in heavily compacted, manmade snow. The hold wasn’t as good as a pure frontside ski, but it was good enough. On a day with an inch of fresh snow on top of chalky hardpack, the skis felt stable and confident.

And when we got a foot of fresh powder, I dipped into untracked woods and floated through an obstacle course of trees and stumps. Then I found a new love for mogul whoop-de-doos on the double-black-diamond Upper Goat.

The Maverick skis felt like an extension of my body on every run. I was in control and confident in my equipment, which delivered nonstop. They didn’t grip as well as others in the iciest conditions. But they were more agile and floated better than other skis of the same dimensions.

Likely, the 88 Ti would have done even better in hardpack, and if I lived in the Rockies, not Vermont, the 100 Ti would be the ski I’d want. 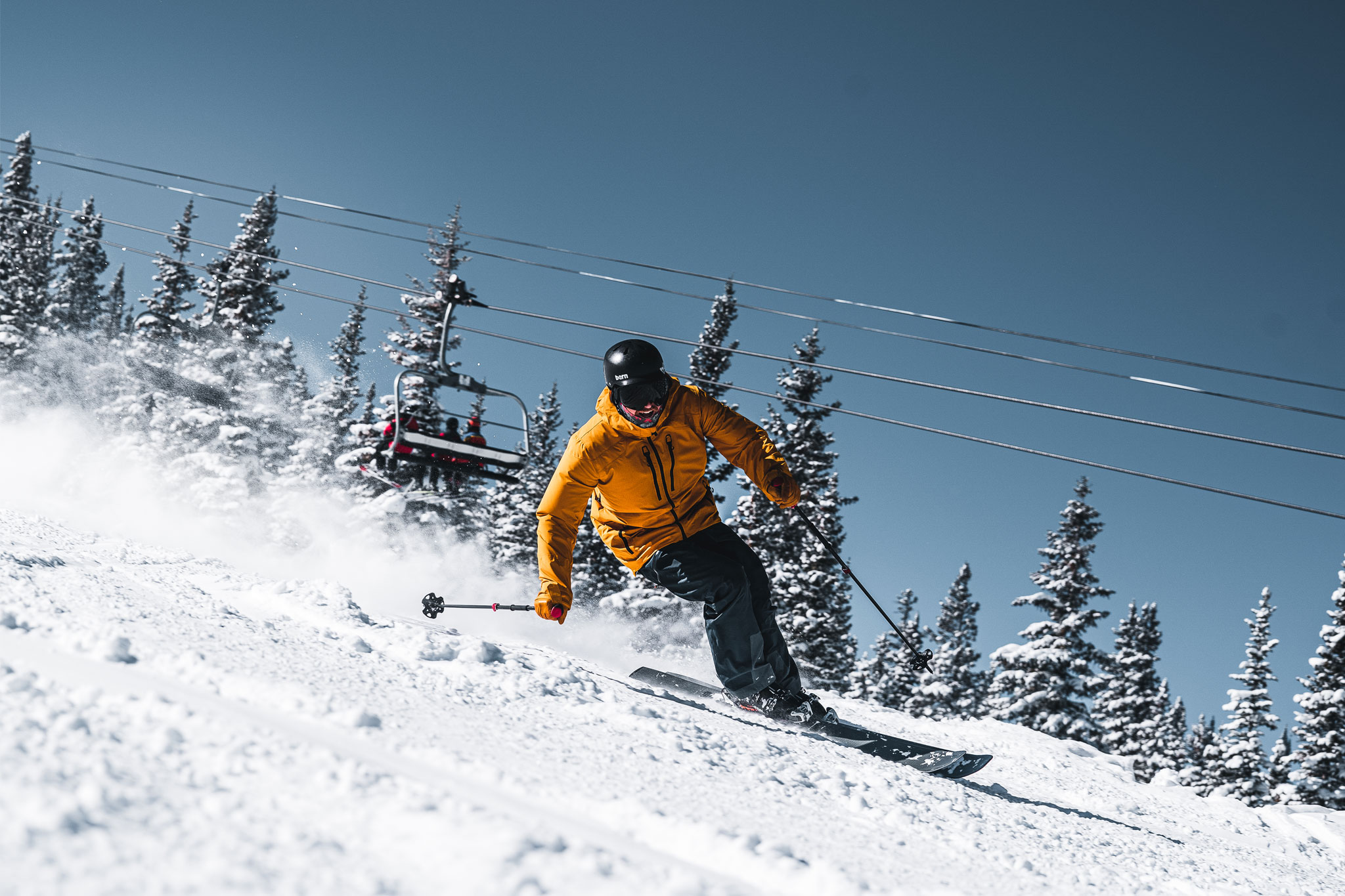 The flat-tail Maverick and Maven are built on Atomic’s Omatic core (an anagram of “Atomic”). Atomic says the Omatic core, which layers poplar, fiberglass, and either titanium or carbon, gives these skis the ultimate balance of stiffness and flex. That’s really what all of us want from any ski: to find that perfect balance to help us charge, turn, and move with confidence.

The brand also said that the skis’ “flow profile” blends the perfect amount of rocker and camber for effective edge contact. Those are big claims, and while I’d argue that no ski could be ultimate, effortless, and perfect, this ski is awesome.

The Maverick and Maven have Atomic’s signature Hrzn Tech Tip, made from the same materials as the ski’s sidewalls. That tip construction, the same as on Atomic’s infamous Bent Chetler 100 and Backland skis, gave me float in snow where I’d normally want a wider ski.

Hrzn Tech gives the tip more surface area with almost no extra weight, and it gives a narrower ski more versatility. I never had to focus on carving; the skis just went where I wanted them to go.

Making skis is a little bit like baking a cake. Everyone uses the same ingredients. For skis, it’s wood, titanium or carbon, and fiberglass. But depending on how you combine the ingredients, the results are different. For the 2021-2022 season, many brands are trying to nail the all-mountain ski sweet spot. And Atomic has.

According to Alex Quitiquit, senior hardgoods buyer at Backcountry, Atomic was wise to invest in topsheet research, as that’s the third thing behind length and waist width that skiers consider when buying a ski.

As such, both the Maverick and Maven carry understated, nature-focused graphics — trees on the men’s ski and Northern Lights on the women’s. Though sadly, once mounted, bindings mostly cover the stark, lone pine on the Maverick’s tail. 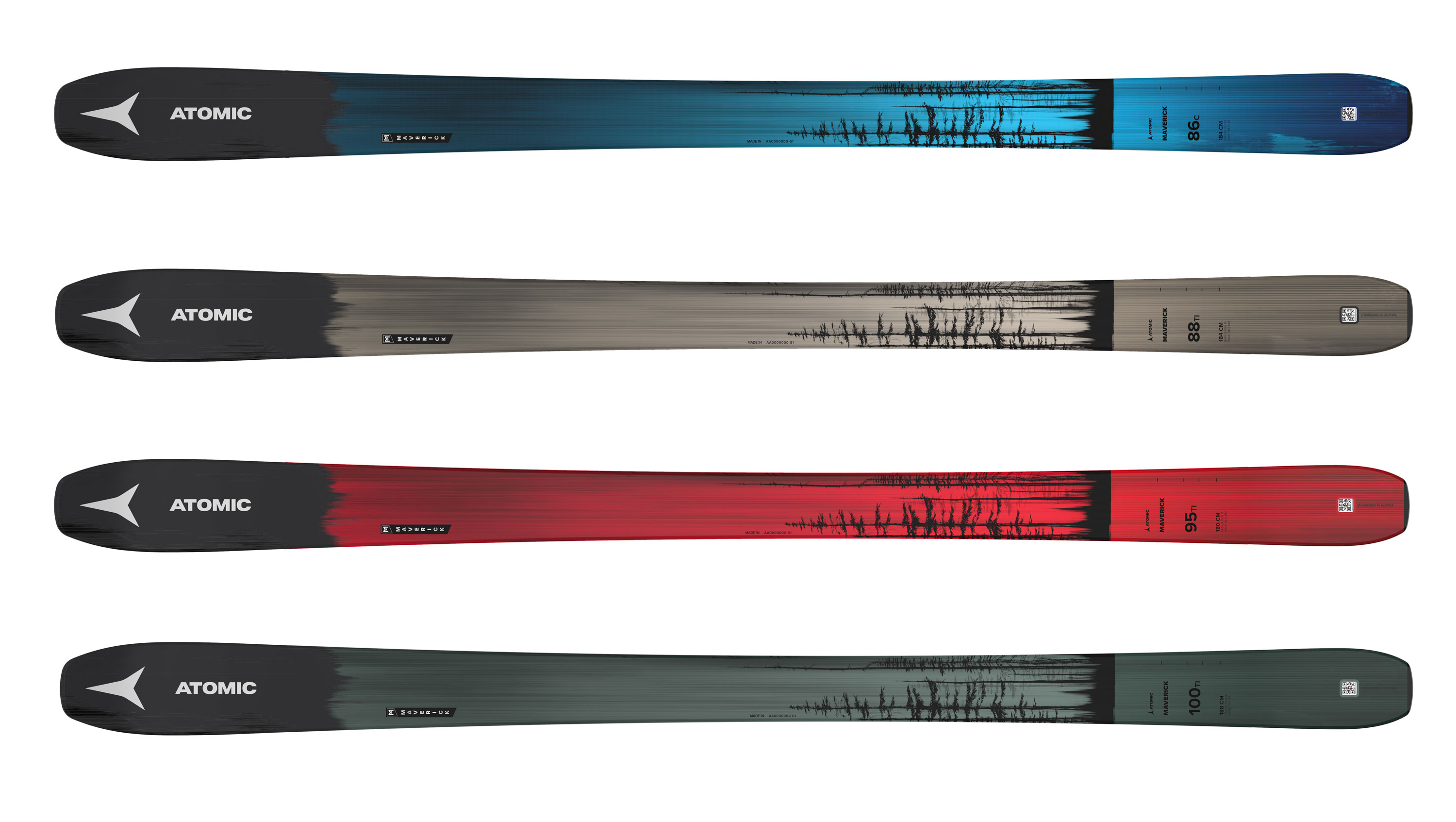 The Best All-Mountain Skis of 2022

Having the right ski can make your day on the mountain. And not every all-mountain ski is created equal. So we hit the slopes and put them to the test from Vermont to Colorado to find the best. Read more…

When a brand completely redesigns its offerings for female skiers, you know there are some worthy updates on the horizon. We tested the Nordica Santa Ana 98. Teaser? They're a blast. Read more…

Up Next: Watch: This 80-Year-Old Park Skier Is Still Ripping