Ski a plastic slope, no snow needed. A Minnesota ski hill this fall will open a year-round slope that requires no snow in a bid to attract more participants and build its reputation as a premiere training facility.

Buck Hill Ski and Snowboard Area will open three Neveplast slopes in time for fall, making it the first winter recreation area in the U.S. with the Italian-made, artificial runs.

On September 10, visitors to Buck Hill can rip down beginner and advanced courses carpeted by thousands of slick plastic bristles that mimic the properties of snow. The Neveplast slopes work at any temperature, do not need a drop of water, and are left in place when the snow falls. They will sit buried under real snow until it melts in the spring.

While small, Buck Hill is a launchpad for aspiring ski racers and midwesterners yearning for turns. Lindsey Vonn famously cut her teeth at the resort, and today young racers hone slalom turns on its slopes before progressing to bigger mountains.

“Even with the great snowmaking capabilities we have, we cannot depend as much on mother nature cooperating — so extending our season will be a big plus regardless of the weather,” said Buck Hill co-owner David Solner.

With 16 trails and 262 feet of vertical drop, Buck Hill is small by even midwestern standards. But it may be a national trend-setter for winter sports thanks to its installation of a year-round surface.

The installation will expand the season and draw more “never-evers,” as Solner called non-skiers, to its venue. 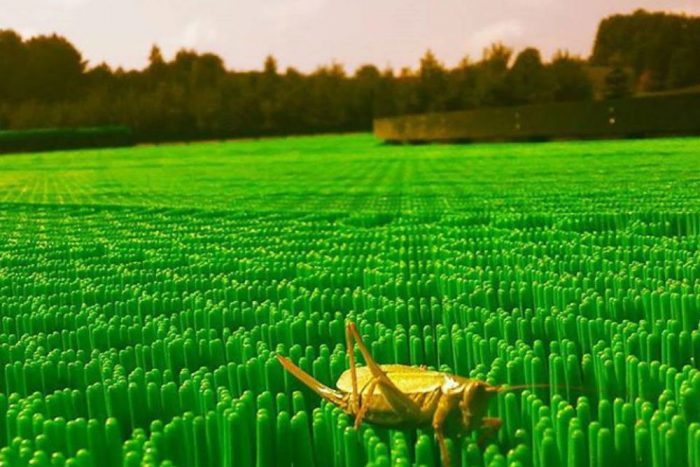 “We feel this is a really big deal,” he said. “We will be moving our resort from an uncontrollable four-month season to a 12-moth facility [that] may draw more people into the sport.”

The Burnsville, Minn., ski hill tested four artificial slope technologies before settling on Neveplast. Among them was Snowflex, the only other artificial snow technology currently installed at an outdoor facility in America.

The Liberty Mountain Snowflex Centre in Lynchberg, Va, has offered an artificial Snowflex surface for tubing, skiing, and snowboarding on the Liberty University campus since 2005.

Neveplast won Buck Hill’s bid thanks in part to the fact that, unlike Snowflex, it does not require water to lubricate the surface for users. In addition to being less resource-intensive, the lack of necessary maintenance and materials means lower costs for Buck Hill, and, according to its director Tom Sshulz, lower prices for skiers and snowboarders as well.

Passes for the Neveplast slopes are on sale now in advance of the September launch, which is expected to run through mid-November depending on weather. Adult passes start at $225. Winter snow skiing passes begin at $405.

We’re eager to try the new surface and curious how it will compare with snow. Warm weather outdoor skiing may bring new people to the sport and should provide summer training options for competitive athletes to supplement trips to destinations with longer-lasting snow cover.

Up Next: Lindsey Vonn Needs A Date (With Me!!!)