Caite Zeliff has built a professional career hucking it off of big cliffs. In 2018 she won the inaugural freeride Kings and Queens of Corbet’s. Then she won again in 2019 and took third place in 2020.

Originally hailing from North Conway, N.H., Zeliff had big dreams of being a professional Olympic and World Cup athlete. Failing to make the U.S. team and sustaining an ACL tear at the start of college made Zeliff shift her plans. But nothing made her give up.

Now, the name Caite Zeliff is on everyone’s radar. She’s appeared in three ski movies in her short career — the latest is her Matchstick Productions debut in Anywhere From Here. This “Behind the Sends” segment gives us a peek behind the scenes and behind Zeliff’s biggest cliff ever. Which she not only stomped once but, unsatisfied with her first attempt, she went for it twice.

As the world has learned to expect, Zeliff comes right back for more. And despite a backslap on the second landing, the retry is a success.

“There’s nothing better,” Zeliff said, of the feeling. 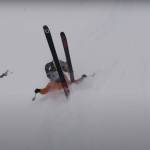 Behold: The Raddest Biffs and Ski Crashes From Matchstick's 'Anywhere From Here'

What's the difference between showing off and trying to show off? When you're showing off, you stick the landing. No ski crashes. Read more…