France’s Decathlon sporting goods retailer and manufacturer sells everything from hockey skates to high-end bikes. Now, it’s launching a new line of skis and boots in the U.S. for winter 2021.

The company, whose tagline is “making sports accessible for all,” is releasing exceptionally priced alpine and backcountry ski gear to the U.S. market this coming winter. The skis and boots were available in Europe in winter 2020-21.

Decathlon’s mission and vision are to bring the power of sport to everyone, everywhere by designing its own products at affordable prices. It also uses its economic muscle to innovate wild new products for a variety of categories.

And it’s slowly but surely working to win over North American consumers with the concept that has been so successful in Europe. The brand’s launch into ski gear is just its latest endeavor, and Decathlon delivers what it promises: affordable skis and boots made from quality materials that will help customers have great skis days for less money. So we put them to the test.

The Wedze Rookie FR100 90mm ski, which comes mounted with DIN 3-11 Tyrolia PR11 GW bindings, is Decathlon’s all-mountain freeride ski. Decathlon says it developed the Rookie for skiers seeking a versatile ski, one that’s fun on piste and can also venture off.

I tested the 178cm length ski on the slopes of Stowe in Vermont and was impressed with its ability to carve up groomers — even black diamonds — and keep stability at speed.

The 16-18m radius, 88-89mm waist ski erred on the side of big swooping turns, but it was responsive and went where I drove it.

The rocker-camber-rocker profile, arguably the most popular ski profile in recent years, didn’t get bogged down in loose snow or crust. The tip didn’t chatter, and the ski had a good hold even on icy hardpack. And the rockered tail helped the ski release from turns.

The pine and beech core was friendly and forgiving without being noodly or squirrely. Decathlon positions this ski as 40% piste and 60% off-piste. I position it at 70% piste and 30% off-piste.

It can handle fresh snow, but it wasn’t agile in bumps. Also, it’s not turn-y enough to make it a top choice for skiing tight woods.

It’s a ski that excelled on open slopes whether I was gently cruising enjoying the sunny day or carving fast and aggressively. And when I opened up the throttle, it was stable and fun.

If you’re a beginner or intermediate skier who’s ready to rip green circles, blue squares, and black diamonds, and who wants to dabble off-piste, the Wedze Rookie FR100 90mm is a great value and a whole lot of fun. But if you want to push yourself to the highest levels of performance, choose a different ski.

If you’re used to skiing super-premium skis, you’ll notice the subtle differences that carbon stringers or contoured layers of Titanal add to a ski’s performance. If you’re not, you’ll just think these are fun.

And if your main objective is to get on the snow as quickly as you can, you’ll appreciate that this one comes premounted with the binding so you can unbox it, adjust it to your boots, walk out your door, and hit the slopes.

The biggest drawback of this ski is that it only comes in three lengths: 162 cm, 170 cm, and 178 cm. So, it won’t fit smaller, lighter skiers. The bindings are compatible with Alpine and GripWalk boot soles, with sole lengths between 259 mm and 382 mm.

Decathlon’s Wedze FR 900 120 Ski Boot is a freeride alpine boot for on-piste fun. The stiffer flex made this boot best for advanced skiers.

I tested the 120 flex because that’s the flex I normally ski. But, the boot is available in a range of flexes suitable for most skiers.

Ski boot flex isn’t standardized, so one brand’s 120 flex boot may not feel the same as another brand’s. This boot felt comparably stiff to the Technica Mach 1 120 I normally ski in. The flex was progressive, supporting me through my whole turn without collapsing or feeling too stiff to engage.

The Wedze FR 900 120’s 3mm thick thermo-moldable liner wasn’t the fanciest. However, it had enough moldability to fine-tune the fit of a boot that was decently well-matched to my foot, which is on the wide side of medium.

Decathlon lists the last for this boot at 100 mm. The liner didn’t have the anatomical shaping of a high-end liner. But it was warm and moldable enough. 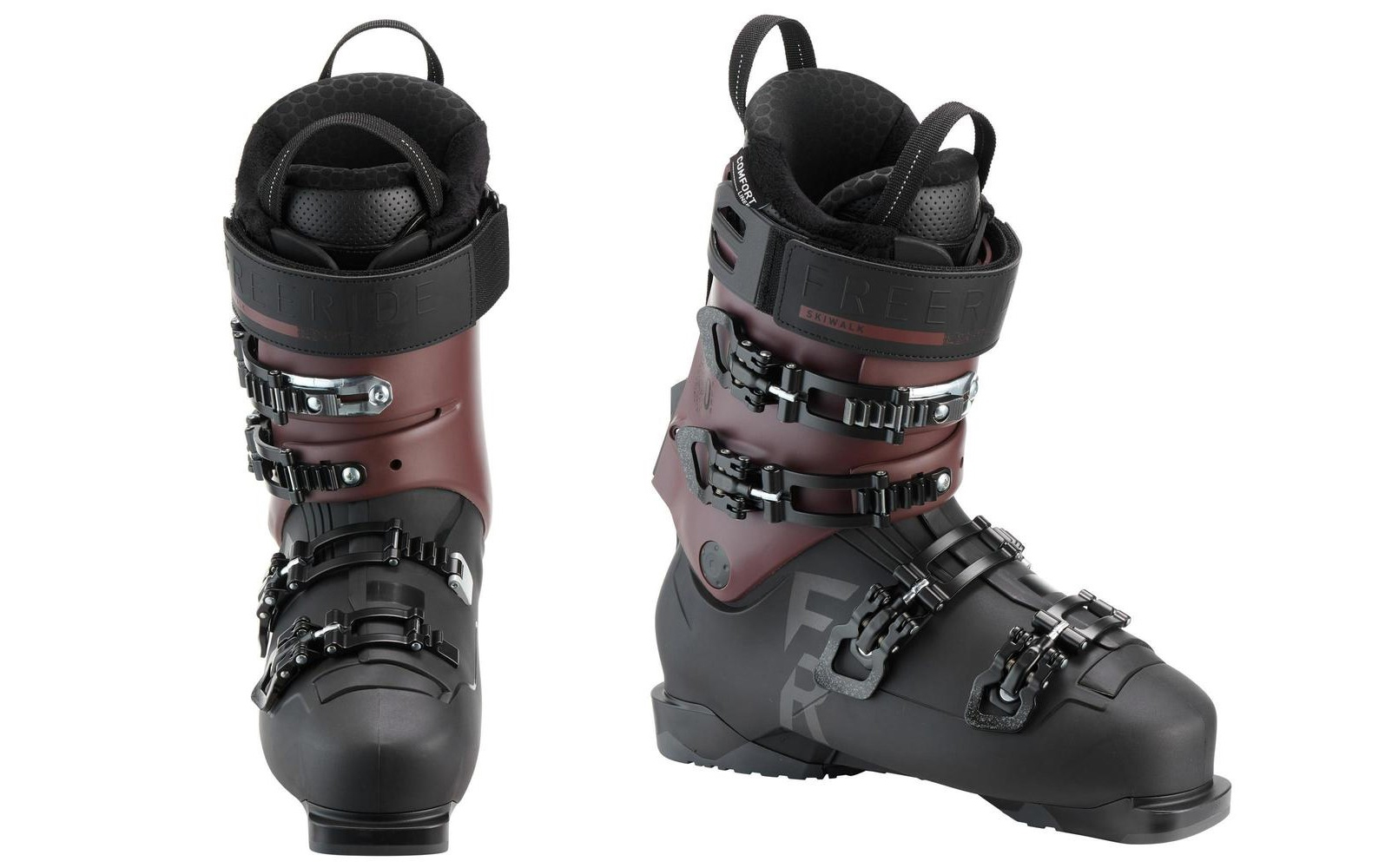 If you buy this boot, do yourself a favor. Throw the foam insoles into the trash immediately and replace them with Superfeet, another preshaped insole, or a custom insole. While most ski boots have disposable insoles, the Wedze FR 900 120 insoles were the lowest quality part of the boot.

The cuff of this four-buckle boot gave me excellent support without cramping my calves. The buckles had plenty of adjustment. And the boot flex helped me spring energetically from one turn to the next. The boot had good lateral power and stability and let me get my skis on edge.

But I couldn’t ski edge to edge as quickly in this boot as in a higher-end, more expensive boot. It wasn’t as responsive. The culprit may be the liner.

When I skied, the liner layers felt like they were shifting against each other. So when I drove the boot, some of the power I was putting in was dissipated by the slipping liner. Because the liner isn’t lasted, it also may have moved inside the boot.

The Wedze FR 900 120 also has a walk mode for skiers who want to try the sidecountry or backcountry. The ski-walk lever is inside the cuff, with a metal flip clip that engages and disengages it. Decathlon claims that open, walk mode gives the boot 42-degree rotation to facilitate climbing.

To me, ski/walk mode was more of a café clip. Released, some additional rotation in the cuff made walking from the parking lot to the slopes more comfortable.

You could use this boot for sidecountry or backcountry excursions, although the heft and limited rotation will weigh you down. And the boots don’t have tech fittings, so it’s not compatible with tech bindings. 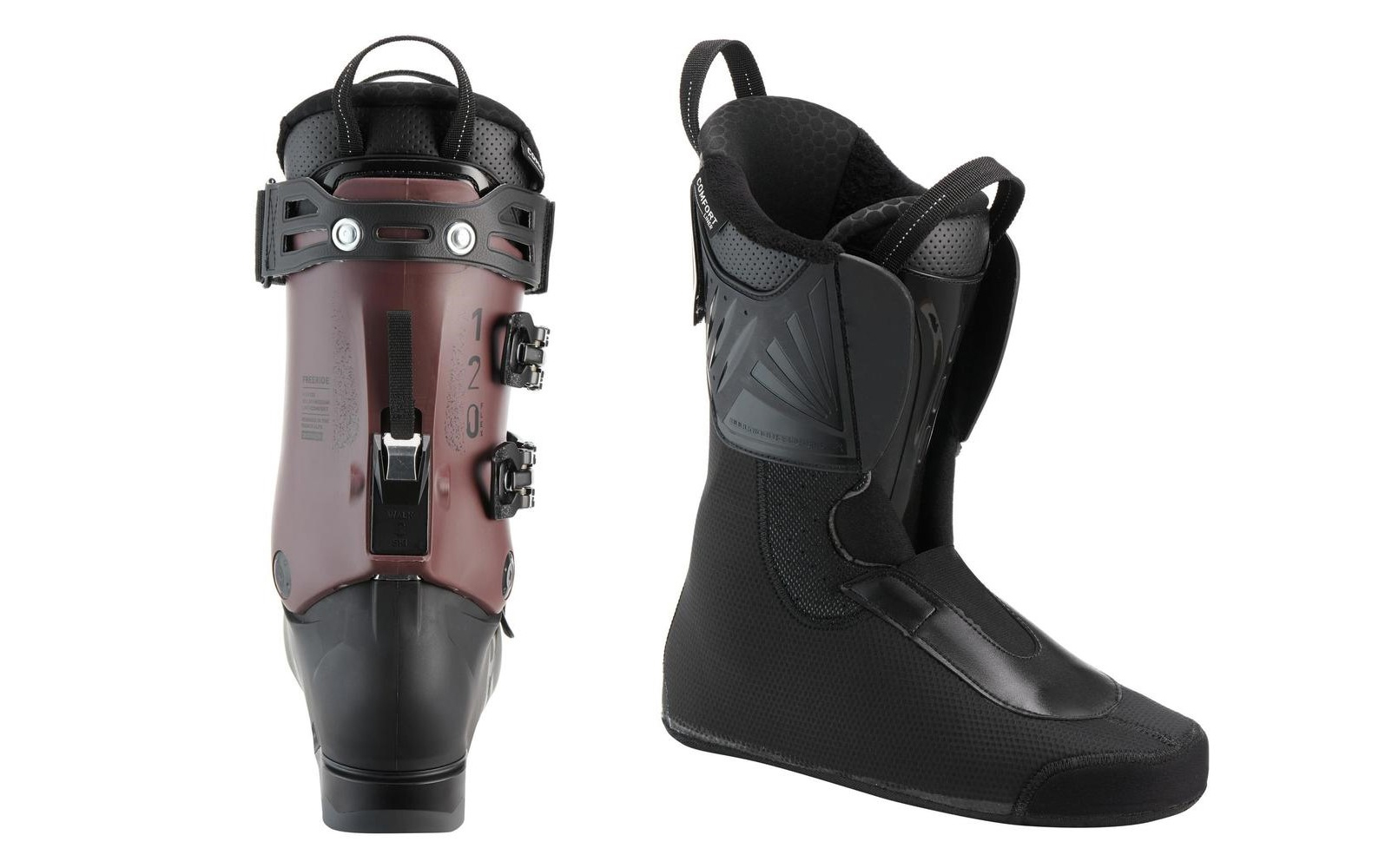 While the most discerning skiers will wish for a higher performance fit, the Wedze FR 900 120 Ski Boot is a great option for new skiers, skiers on a budget, and skiers who just want to carve up the groomers. The price is right, and for the price, you’re getting a lot more boot than you would if you spent the same on a name brand.

Decathlon claims that it makes everything it sells, but a name brand manufacturer is likely making these boots for Decathlon, probably using retired molds. That’s why they feel good, fit well, and ski well. They don’t have every modern bell and whistle, but they’re a solid boot that won’t hold you back from ripping it up.

For a lot of people, recreating outdoors comes down to price. And Decathlon, based at the foot of Mont Blanc in the French Alps, has 1,647 stores in 57 countries. So, it uses economies of scale and vertical integration to keep prices super low.

For comparison, REI has 165 stores, and Dicks Sporting Goods had 850 stores in 2018. The mission-driven brand is committed to passing the savings on to customers so more people can be active.

Plus, it boasts more than 20 house brands creating products across 86 sports. And it’s not making disposable gear. Its bikes have name-brand parts, and its skis and boots are made to last more than a season or two.

“Not only do we care about our customers’ happiness, we care about the impact we are having on the rest of the world,” Decathlon says on its website. “We take our customers, our employees, and society around us very seriously. We consciously choose our actions in order to produce a future that we believe is best for everyone on our planet.”

It also has stringent people practices, with strict oversight of all its suppliers and manufacturing facilities. Decathlon is growing its footprint in the U.S. via e-commerce and two flagship stores in San Francisco and Emeryville, Calif.

Up Next: Bike to Ski to … Lava? Trio Completes Human-Powered Volcano Tour