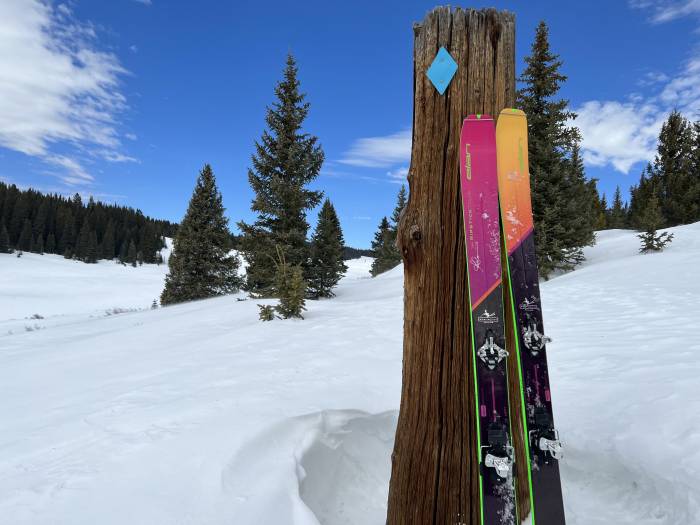 The latest iteration of Glen Plake’s signature Elan Ripstick has been redesigned to give skiers an extra edge in the backcountry.

The hike up had been light as a feather. Snow whipped around us as we transitioned, ripping off our skins and switching our bindings to ski mode. I clipped into the 2023 Elan Ripstick Tour 104 and lifted my feet one by one, admiring how light they were. I gripped my poles and peered down the windblown slope.

Now for the real test. The AT skis had been great on the ascent. But how would they fare going downhill?

I gave my partner a thumbs up and she returned the signal. Then I turned my skis, slid over the edge of the mountain, and cut into my first turn.

In short: I tested the 2023 Elan Ripstick Tour 104 from March to November 2022 (skiing through the summer wherever I could find snow or glaciers). I used them in March blizzards, on bluebird June days, at hanging glaciers in August, and on rock-hard piles of ice in October.

They didn’t excel in all of those conditions. But for most backcountry scenarios they absolutely cut the mustard. What they might lack in power, they make up for in their lightweight construction and general versatility.

The Ripstick is Plake’s signature ski. And it’s one of Elan’s bestselling models year after year. The original versions were designed to offer freeride power and agility on bigger mountains. The 2023 Ripstick Tour 104 takes that design and makes it light enough to hit the skin track with.

Before I got on the Ripsticks, I was skiing a pair of Rossignol Black Ops with Marker Duke PT bindings, weighing in at a total of 3,180g.

That was a heavy setup.

So, let’s just say I felt the difference right away, coming off of that and getting onto a ski that weighs 1,610g (with bindings weighing just 605g). It was almost 1,000 g lighter.

However, as far as touring skis go, the Ripstick Tour isn’t super-light.

That’s not to call it a heavy ski by any means. But it lands pretty squarely in the middleweight class for backcountry skis. They’re lighter than almost any resort ski, and heavier than some of the higher-end SkiMo racers (like the Atomic Backland 85 UL).

Elan used the Tubelite system (more on this later) to reduce the weight of the Ripstick Tour’s wood core without sacrificing control or stability. So, despite the skis being so much lighter than what I’m used to, I felt very stable on the Ripstick Tour setup.

They were nice and light to hike in, and had enough weight to carve well in most conditions.

The 2023 Ripstick Tour has a rocker-camber-rocker profile — my personal favorite shape for any ski.

But they’re unique from most comparable touring skis in their asymmetrical design (aka, an Amphibio profile). The inside edge of the ski is cambered and has an extra layer of carbon laminate to improve the grip on your inside, downhill edge. The outer edge is rockered to smooth your transitions from one edge to the other.

That made turning on the Ripsticks feel pretty effortless. It also gave me a lot of control when I got into trees. With an 18m turn radius, the Ripsticks proved nimble and agile when I needed them to be.

Sadly, I didn’t get any blowout powder days on the Ripstick Tours (not yet, at least) so I can’t speak to their capability to shred the deep stuff. But on the days I got to ski them in a couple of inches of fresh snow, they performed well. With rockered tips and a 104mm waist, they floated easily and were easy to control.

I’d also never been on skis with square tips before. Obviously, that didn’t affect the performance at all. But it made clipping my skins on and off the front end easier. Plus, it just looks cool.

To make the wood core of the ski lighter, without sacrificing power or stability, Elan used a technology it calls TubeLite in the Ripstick Tour. Two tubes of lightweight carbon are inserted into the lightweight laminate wood core, along the edges. That reduces weight while providing stability and torsional rigidity for the rider.

Elan also integrated layers of carbon reinforcement at the tip and tail of the core (called VaporTip) to further improve the ski’s stability and dampness.

As I mentioned, the Ripstick performed adequately and even excelled in most backcountry conditions.

On soft snow, powder, groomers, and slushy spring/summer days this pair of boards did everything I needed them to do. They aren’t squirrely, they’re easy to control, and they feel stable on the downhill. And thanks to the carbon reinforcement, they’re damp enough that excessive chattering is mitigated (up to a certain speed).

The unique asymmetrical rocker-camber-rocker shape is also great for turning. A skier just has to tip from one edge to the other, and the Ripstick Tour will bank effortlessly for them.

Where they fell a little short is in the power category. These skis don’t have the mass or material to plow through crud, crust, or icy conditions. After all, there is no metal in them at all. And at higher speeds, their stability started to falter a little bit.

That’s not surprising considering their lightweight construction. Elan didn’t design these skis to crush in bad conditions or to charge downhill at racing speeds. They were designed to be lightweight all-around touring skis that will perform well in most backcountry environments and scenarios.

Which is exactly what Elan created in the 2023 Ripstick Tour.

The 2023 Elan Ripstick Tour has a classic, kind of retro look. With sherbet orange and pink top sheets and bases, and neon green sidewalls, these skis pop with color. Plus the little holographic Glen Plake silhouette emblazoned on the top sheet is a  flashy little embellishment.

Overall, the Ripstick Tour is a good-looking ski. It’s simple, and it still stands out on a rack.

I put a lot of days on my Ripstick Tour setup last spring, summer, and fall. I rode them in conditions that spanned the spectrum. And the more time I spent with them, the more I grew to like them.

They didn’t tire my legs out or hurt my hips when I was hiking in them. They provided stable riding on the downhill, made easy turns, and floated in fresh snow.

The Ripstick Tours aren’t perfect for everything, but no ski is. These make for a great go-to backcountry touring ski. If you’re looking for an all-around daily rider, this is a great addition to the quiver.

It’s now my go-to backcountry touring setup. And I’m psyched to put more days on these skis this year. 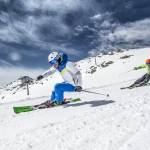 Elan claims skiers will get instant feedback from a ski embedded with sensors. Read more…