This hour-long film about one of the world’s best freeskiers is a must-watch.

Otherworldly. Ethereal. Almost magic. “Few Words” takes us into the life of French athlete Candide Thovex, arguably the most entertaining skier of all time. And it’s not just mind-boggling ski footage.

This film starts slow, with sweeping views over luscious green landscapes, as animals emerge from their nests and caves and a light snowfall begins to chill the air.

There’s a crispness to the footage and anticipation through the entire film. About 5 minutes in, Thovex enters, flying off mounds of powder. The amount of snow and the calming soundtrack just add to Thovex’s mystique.

Some have called him a legend, pioneer of the sport, creator, even a god. And it’s easy to see why in this film. Some of his jumps, and heck, most of his landings, don’t seem humanly possible.

If you’ve never seen footage of Thovex skiing (whether freestyle or big-mountain skiing), you’re in for a treat. And trust us, after watching this film, you’ll be hard-pressed to find another ski film as good as this one.

“Few Words” was produced by Quiksilver and Faction Skis in 2015. 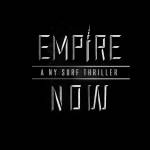 'Empire Now' is a surf thriller. Wondering what kind of film that is? Watch to find out. Read more…