It’s challenging waiting for ski season. Especially when you’re a Freeride World Champion like Nadine Wallner from Arlberg, Austria. As a Mammut-sponsored pro skier, it’s tempting for Wallner to pursue snow, flying around the world from resort to resort, or driving long distances to ski glaciers.

So Wallner decided to change the way she adventures, for Mammut and for herself. Because it’s better for the planet. And it’s still just as gratifying.

“When there’s snow, I go skiing. When there’s no snow, I go climbing or trail running,” stated Wallner, opening up about her flexibility to adapt to the season rather than chase it, which has a negative impact.

“I prefer to wait at home until there is snow, then I go skiing, instead of sitting in a car for hours and driving to a glacier,” explained Wallner.

Mammut is telling this story with Wallner as part of International Mountain Day on December 11. This year’s theme is “Women move mountains.” It’s celebrating women’s key role in protecting the playgrounds we love. It’s a chance to promote gender equality and improve social justice around the world.

And hopefully, to improve the state of our planet as well. 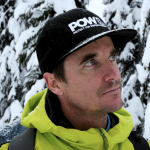