Roam’s round A funding all but assures its exoskeleton legs for skiers will find their way to mountain resorts beginning next year.

It might seem like the world of outdoor sports — especially skiing — already requires an overwhelming amount of gear. From boots and goggles to helmets and heated gloves, you might think there aren’t any places left on your body to gear up.

The goal? To give you more control, stronger turns, and longer runs “while reducing muscle fatigue and joint pressure.” 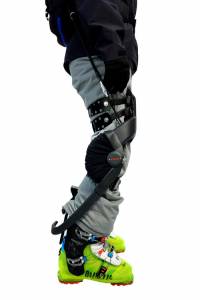 But just eight months after its public debut, Roam announced it has secured serious funding to help bring its exo-suit to market. In a press release today, Roam revealed it secured $12 million in Series A funding from a handful of investors, led by Yamaha Motors.

“Roam is creating an exciting new category of products that enhance human capabilities,” said Amish Parashar, a partner at Yamaha Motor Ventures. “By making these robotic exoskeletons affordable, scalable, and powerful, Roam has removed the biggest barriers to widespread adoption.”

“We envision these products will one day be commonly used to create new thrilling experiences and support human mobility,” Parashar concluded.

With the impressive first round of investment, Roam now sits on about $15 million in startup capital, according to Tech Crunch. And despite its futuristic concept, the Elevate is already slated to hit select ski resorts this winter.

Right now, skiers can hop on the waitlist to demo the “robotic exoskeleton” at Lake Tahoe starting this Christmas. Roam will then launch the Elevate at Park City, Utah, in January.

And why exactly would anyone want to strap into a pair of robotic ski legs? Roam CEO Tim Swift sees benefits not just for those with mobility issues, but also serious athletes looking to train harder and longer.

“Roam exists to change the boundaries of human mobility,” Swift said. “Whether you are an Olympian, an everyday athlete, or looking to regain lost mobility, we want to power you beyond what your body currently makes possible.”

The robo legs accomplish this by taking on up to 30 percent of the user’s body weight. The brand claims this relieves stress on the quads. The exoskeleton also functions as a shock absorber to help reduce impact fatigue as well as stabilize and protect the knee joint. This reduces the risk of injury.

The system draws power from a backpack-mounted battery. It has adjustable air actuators to dial in the amount of assistance. See it in action below:

The Elevate will reportedly run in the neighborhood of $2,000. That’s no small investment for a sport that’s already hard on the pocketbook. But those interested can hop on the waitlist to try out a pair at Lake Tahoe or Park City for $99.

What do you think — is there a future for e-skiing?

Up Next: Strava ‘Year In Sport’ Reveals Active Trends Around the World