Sam Anthamatten has led hundreds of adventures as a professional guide — now the spotlight is on him as he attempts to traverse the Swiss Alps on skis and by parachute.

Sam Anthamatten is a pro mountain skier who’s no stranger to the 6,000m peaks in the Swiss Alps. He’s from Zermatt and has spent the better part of his life on top of the peaks of that region. He’s a biker, a climber, a mountaineer, a paraglider and, of course, a big mountain skier.

Anthamatten long dreamed of skiing an infamously gnarly mountain near his home called Obergabelhorn. But, when he went there the first time, for the filming of La Liste, Anthamatten was unable to free ski Obergabelhorn with fellow skier, and friend Jérémie Heitz. Instead, he offered support by being part of the film team.

“I think at the end, my role was always the supporting role in every chapter of those characters,” said Anthamatten.

It was hard for Anthamatten to watch his dream unfold for someone else, from behind a camera. But it didn’t deter him. He was inspired to create his own bigger, more intense project, fusing skiing and paragliding into a single adventure.

In this short film, you’ll see Anthamatten as he goes back to do it his way, attempting to paraglide from Zermatt to Obergabelhorn’s north face, hiking up to the top, skiing down, and then returning home. It’s a wild journey, but for Sam Anthamatten, it’s all in a day’s work. 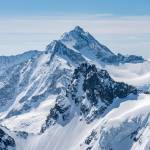 Get motivated to rally up friends and head to the snow-covered mountains after seeing Ryan Colley's incredible 26-day ski tour. Read more…