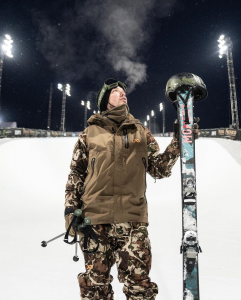 A new film from First Lite highlights the accomplishments as well as the normalcy of the life of one of the top skiers in the game today: David Wise.

Wise is currently at the peak of his skiing career in the halfpipe, with the 2021 X Games underfoot and an upcoming Olympic showing in 2022. He currently holds two Olympic golds and four X Games golds. And it’s not unusual to see him wearing First Lite camo on the slopes. (And from a gear junkie’s perspective, the David Wise setup is fire. Hey First Lite, where’s our ski set?)

It’s an unusual partnership in a world filled with big-name ski brands. But Wise has been a hunter since he was a kid in Reno, Nev. And the film marks his thoughts on life as a skier, a hunter, and what comes after the world of professional freestyle skiing.

It’s worth a watch.

Tree Saddle or Treestand? 'The Hunting Public' Has Thoughts

Tree saddles are growing in popularity. But treestands have their place in the woods. Which is best for you? Read more…

Saving…
13 Backpacking Meals People Love
From Anti-Gun to Hunter: How I Came to Own and Respect Firearms
×