The thrill of downhill skiing on flat ground: That’s one premise of the Skizee, a wacky winter invention.

Do you hate riding chairlifts? Is cross-country skiing too boring? Are snowmobiles too much of a hassle? Then the Skizee is for you!

Hop in front of the Skizee Woodsrunner, and a four-stroke motor machine with beefy tread plods along behind you, propelling you forward. A harness unfolds with two handholds for skiers to grip the Skizee. Then, let it rip! According to the brand, the Skizee can reach speeds of 3-25 mph. 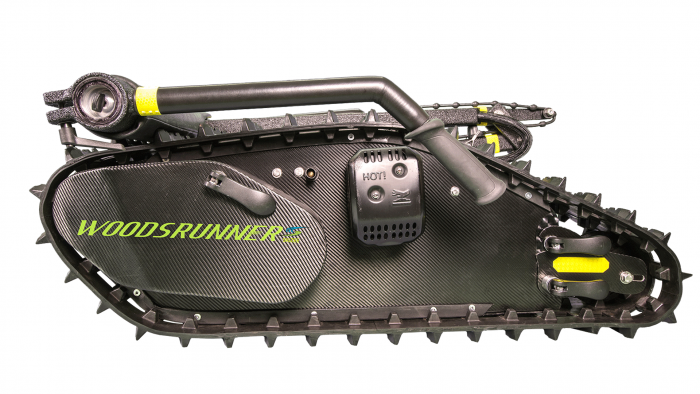 The Skizee appears to be a novel approach for the flats and accessing remote areas. But it’s not some crazy genius’s lone project. The founder wants this thing to go big, and he’s taking preorders on the website right now.

No word on pricing yet. We’ll update this article as the info becomes available.

According to a video about the Skizee, the brand is talking with ski resorts for Skizee use. But you can also fill out a preorder form yourself. We’ve reached out to the brand to ask how it’s handling orders and if the average joe in Montana can get their hands on a Skizee.

The invention was born when Maidment was skiing at his local ski resort, Snow Goose Mountain, as a child. The lifts constantly broke down, causing Maidment to slog up to the top of the hill for the rush of the downhill. From that moment, Maidment wondered if there was a better way to get around on skis.

Enter the Skizee. At first, Maidment took an electric scooter and some BMX wheels with chains on them. It worked but wasn’t enough. Eventually, he developed the Woodsrunner, the brand’s first dialed product.

The Woodsrunner has a four-stroke engine with a 1-gallon gas tank. It uses an electric start as well as an emergency stop wristband and throttle palm lock. You can view the full specs on Skizee’s website. At a glance, it appears the brand thought this one through.

The below newscast from Newfoundland and Labrador, Canada, highlights the Skizee and its inventor. The device certainly looks quirky, but fun enough to try if you can’t get to the steeps!