The short film starts with sweeping views of ice-covered slopes of Chamonix. Then a rider enters the frame, and a burst of powder floats and hangs in the air. The rider, pro boarder Victor Le Rue, carves left.

“Your trajectory is boundless, you fly over the snow,” the narrator reads as Le Rue leans into powder in sweeping slow-mo. Le Rue is shredding the slopes like he has been for years. But this time, his brother — the narrator — is riding with him.

They start at the very top of a peak, then ski over a spine and down a line with 1,200 m of vertical drop. It’s cold, chilling, epic. There are big drops and wide traverses.

The 30-minute film has everything you could want: extensive peaks, POV skiing, and the excitement of camaraderie, all wrapped up in a powdery winter sheen. 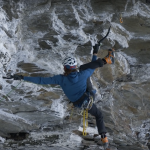 Heinous, fun, crazy: A new film, 'Give Me Back My Bullets,' follows climber Jackson Marvell as he seeks out the coolest, most unconventional climbs in Utah. Read more…