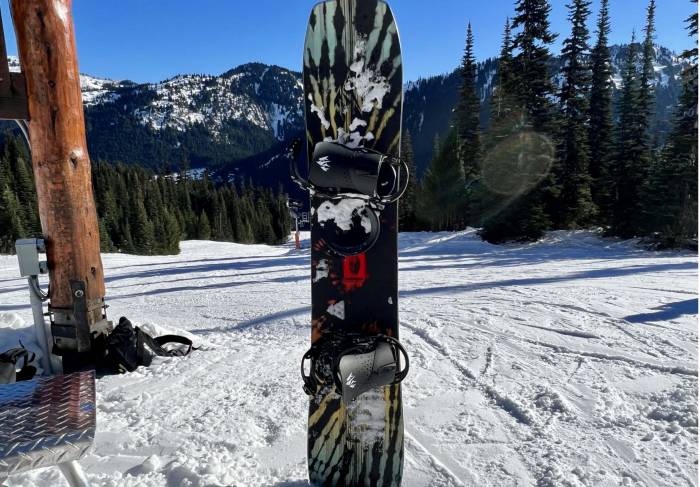 Snowboard designer Jeremy Jones enlisted the help of a surfboard shaper to create the Surf Series. I got my hands on the Mind Expander Twin, riding in all kinds of conditions across the PNW, Tahoe, and Colorado over 30-plus days. Here’s my verdict.

Jeremy Jones is a snowboarding icon credited for pioneering backcountry technologies with his company, Jones Snowboards. He’s also an avid surfer, and for the past few years, he’s been collaborating with surfboard-shaping icon, Chris Christenson, to develop the Jones Surf Series — a line of surf-inspired snowboards engineered to maximize glide.

As a lifelong surfer, I’ve appreciated the collection from afar, admiring the directional shapes and wondering how “surfy” they must feel in powder. But as a lifelong snowboarder with only enough dough for one board per season, I hesitated to try them.

My concern was that the same directional designs would limit my ability to ride freestyle. Go switch, pop ollies, hit rails … things like that.

Those concerns were resolved last year when Jones added a new board to the collection — the Mind Expander Twin. This was the Surf Series’ first true-twin, but with the same surfy nuances as the original Mind Expander.

The result is a friendly freestyle snowboard that goes as well switch in the park as it does floating over pow. It has the glide of a surfboard and an ethos tailor-made for surfers who snowboard, and vice versa.

In short: The Mind Expander Twin is as playful and versatile as a traditional freestyle board, but with glide that uniquely compliments my surf-inspired riding style. With rocker in the nose/tail and directional camber underfoot, it springs out of turns — a trait that comes to life in powder to truly reflect the feeling of surfing.

On groomers and in the park, the camber takes a back seat to its true-twin feel and the ride reverts to its freestyle roots. For icy days, however, I’d use a different board.

Mind Expander Twin Review: A Jones Snowboard With All the Kicks

A narrow sidecut between the boots adds noticeable acceleration in drawn-out rail turns on any type of snow. Its wide outline offers plenty of space to accommodate my size 11 boots without toe drag. The spoon-like contour of the nose and tail minimizes the threat of catching an edge, pairing with the board’s friendly flex to allow awesome pop and play.

Like all the boards in the Surf Series lineup, Christenson shaped the first Mind Expander Twin template out of wood, translating his process for making surfboards into snowboard design.

With Jones’ oversight, that prototype was affixed with progressive snowboard technologies, essentially creating a high-tech board with a very natural feel.

At the root of the Mind Expander Twin’s design is the rocker-camber combo, which features a healthy rocker in the nose and tail, and Christenson Surf Camber underfoot. When weighted in a turn, the pairing performs exceptionally well on edge, adding spring and stability to high-velocity turns on- or off-piste.

Paired with its wide, high-volume nose and tail, camber is what gives the Mind Expander Twin its surfing signature, and a supremely floaty feel that turns powerfully. It’s incredibly fluid in transition from edge to edge, and its powder turns are absolutely reminiscent of turning on waves.

At the Mind Expander Twin’s core is a Flax/Basalt Stringer that dampens impact on snow for a smoother glide with a friendly flex. It has plenty of flex to comfortably butter, but it’s not so bendy that speed gets sacrificed.

The camber-rocker profile does well to counter the flex so that it doesn’t bog in turns. I like a lot of flex in my freestyle boards, but I usually don’t like riding freestyle boards at high speeds in powder. With the Mind Expander Twin, I have the flex of a freestyle board built into a board that does great going fast in pow.

While the Mind Expander Twin is a capable happy medium, if you’re a die-hard freestyle rider who prioritizes flex, this might not be the board for you. It is a hybrid, so while it does well with both freestyle riding and powder surf, it’s not necessarily the best at either end of the spectrum.

It pops well on jumps and lands stable in the park, but I steer clear of rails these days and can’t speak to its jibbing prowess.

My guess is there are better boards out there for the rail game. Meanwhile, it feels great on powder, but not as great as some directional boards. (On the best powder days, I unsheath a Genemstick Stingray.)

But if you’re going for a one-board-winter, the Mind Expander Twin is hard to beat.

This is my favorite feature of the Mind Expander Twin and a safeguard for getting squirrely in subprime snow conditions. 3D contour is a fancy way of saying “spooned,” meaning that the board’s tips taper up around the edges with a spoon-like footprint.

The feature is subtle, and not noticeable in deep snow. But it adds welcome peace of mind on ice and in the park, as it minimizes the risk of catching an edge. As the widest points on the board, my nose and tail are typically the areas that get hung up in turns. That usually creates a serious hazard on hard snow.

With the Mind Expander Twin, I can turn more casually without as much concern for accidentally snagging and consequently going ass over teakettle.

While the Mind Expander Twin is heavily favored in deeper, fluffier snow, it’s also decent on ice. That’s thanks to Jones’ latest iteration of Traction Tech. Traction Tech 3.5 is a design feature integrated into the edges.

This provides three or more points of contact between the board and the ground at all times. In a steep and weighted turn, the snowboard essentially stands on edge. The two widest points — around the front and back foot — are the primary points of contact with the ground.

There’s a third point of contact between the feet, where the board’s flex flattens out the camber in turns. This translates to more edge grip on hard or icy snow. Since there’s more contact, there’s less opportunity for the board to slide out from underfoot.

To be clear, it’s not the grippiest board on ice and does have its shortcomings when it comes to edging.

On the icier days, I prefer Lib Tech’s T. Rice Pro model, with its Magne-traction edges. But again, if I could only pick one board for the season, I’d go with the Mind Expander Twin. It’s generally a more playful setup that’s remarkably fun in powder and manageable on ice.

The Mind Expander Twin is part of Jones’ Big Horn series, meaning it’s exceptionally wide and carries more volume. The added girth is an asset in powder. It pairs well with the board’s directional camber to feel seriously floaty off-piste.

That said, the volume can be a lot to manage if you’re used to a traditional freestyle board. It definitely takes some getting used to. It was a bit off-putting at first because the board felt slower going from rail to rail in tight-radius turns.

If you’re used to low-volume park boards, this thing might feel like a boat on your first go. Once I got used to it, I grew to love the added volume. It feels exceptionally stable underfoot. Again, the added float it lends to powder riding is well worth the learning curve.

The entire Surf Series received updated graphics for 2023. The new simple, white look really resembles the visuals of a modern surfboard. Other than the cosmetic differences, the ’22 and ’23 Mind Expander Twins are identical.

I tested the 2022 Mind Expander Twin. While I do love its reflective tie-dye artwork, the 2023 version looks a lot cleaner, in my opinion.

It’s not designed for icy conditions, but the Mind Expander Twin has a surprising grip on firm or icy snow. Altogether, it’s a highly playful and dynamic board with an exceptional float in powder, and it has an easy-going feel in the park.

I’d say it’s a user-friendly sled for all skill levels — and a prime candidate for a one-board quiver. 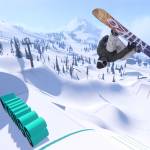