The top-selling Never Summer snowboard shape for men is now available for women. We ripped around Copper Mountain in Colorado for this first look review of the Lady West.

The Lady West women’s snowboard takes its lead from Never Summer’s top-selling West model for men. Guys were consistently impressed with the snowboard’s effective mix of camber, sidecut, and stability. It’s capable in various conditions just about anywhere on the mountain.

Women deserved one all their own, and Never Summer delivered with the Lady West. The board came online this season in a single length — 149 cm. But I got my legs on a 156cm Lady West demo. The full series won’t be available until the 2019-2020 snow season, but here’s what you can expect.

In short: The Lady West is a hard-charging snowboard for intermediate to advanced shredders who want to improve or build greater confidence in the sport. An updated shape, slight taper, and webbed carbon construction are combined in such a way that getting from edge to edge is easier. While demanding your full attention, the Lady West makes getting through powder, down ice, and around trees a notch more fun.

First things first: Let’s get into specs. Lengths and shapes changing up from nose to tip each year can be confusing. So I’ll break down what Never Summer is doing with this snowboard.

The brand lauds the Lady West as the “greatest profile in snowboarding.” That’s a big claim, but riders of the West seem to have taken notice of the way Never Summer is boldly serving up its latest all-mountain snowboards. 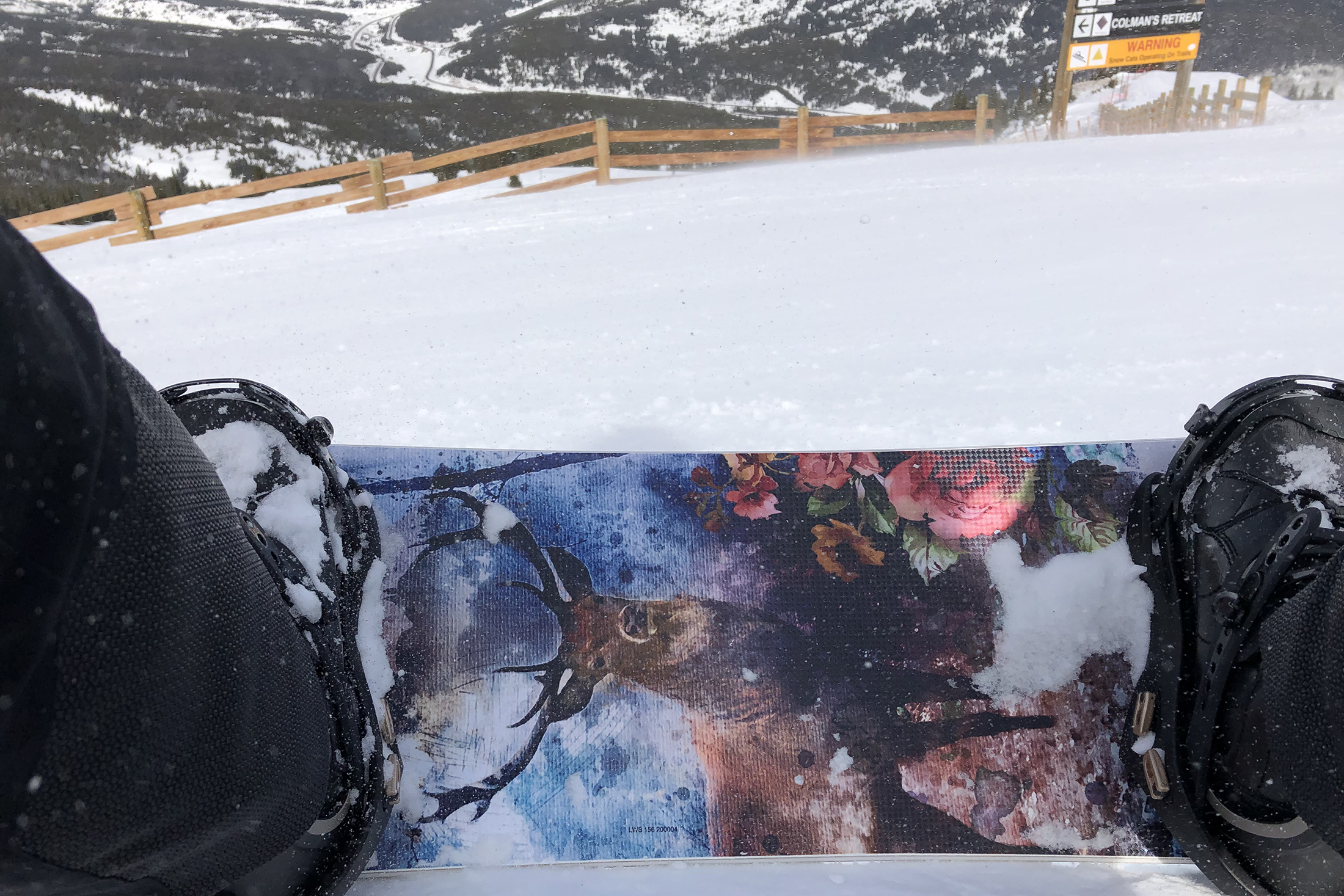 On the firmness scale, the wood-core Lady West is one bar past mid-firm. On damp, it’s way more snappy than cushy — hence the hard-charging character of this board. This is a stiffer, tighter, grippier plank made for power turns on the mountain rather than, say, a play sesh in the park.

Never Summer added carbon on the top and bottom of the board, an early-rise nose, an extended transition area up front, a “super light” wood core, underfoot stabilizers, and P-TEX protection on the tip and tail.

In the 149cm Lady West model, the specs look like this:

But the Recluse Web carbon layup is where things get interesting on this rocker-camber shaped board. Never Summer applies carbon to the base in a webbed fashion and top carbon in narrow, V-shaped wedges. This adds some clever stability while still allowing for a big transition area on the mid-front of the board. This construction permutation seems to balance confidence-boosting stability with just enough torsional flex where you want it in weight-shifting areas.

I got a chance to take the Lady West on the slopes of Copper Mountain for enough turns to … make me not want to give it back.

For perspective, I already ride a Never Summer snowboard. The Infinity model that I’ve been on for the last two seasons is shorter than I was used to and much more playful than the Lady West. And while I thought I might want that profile for keeping up with my kids in the park, I’m thinking twice about my next board after some initial spins on the Lady West.

Again, I was able to demo the Lady West in a size 156 cm. That’s more appropriate for my height, which is hedging on 5’8”. I ride regular and had my stance set more traditionally in the latest women’s-specific Flux GX bindings on the Lady West. On my Infinity, I have both feet angled forward in a more aggressive stance. 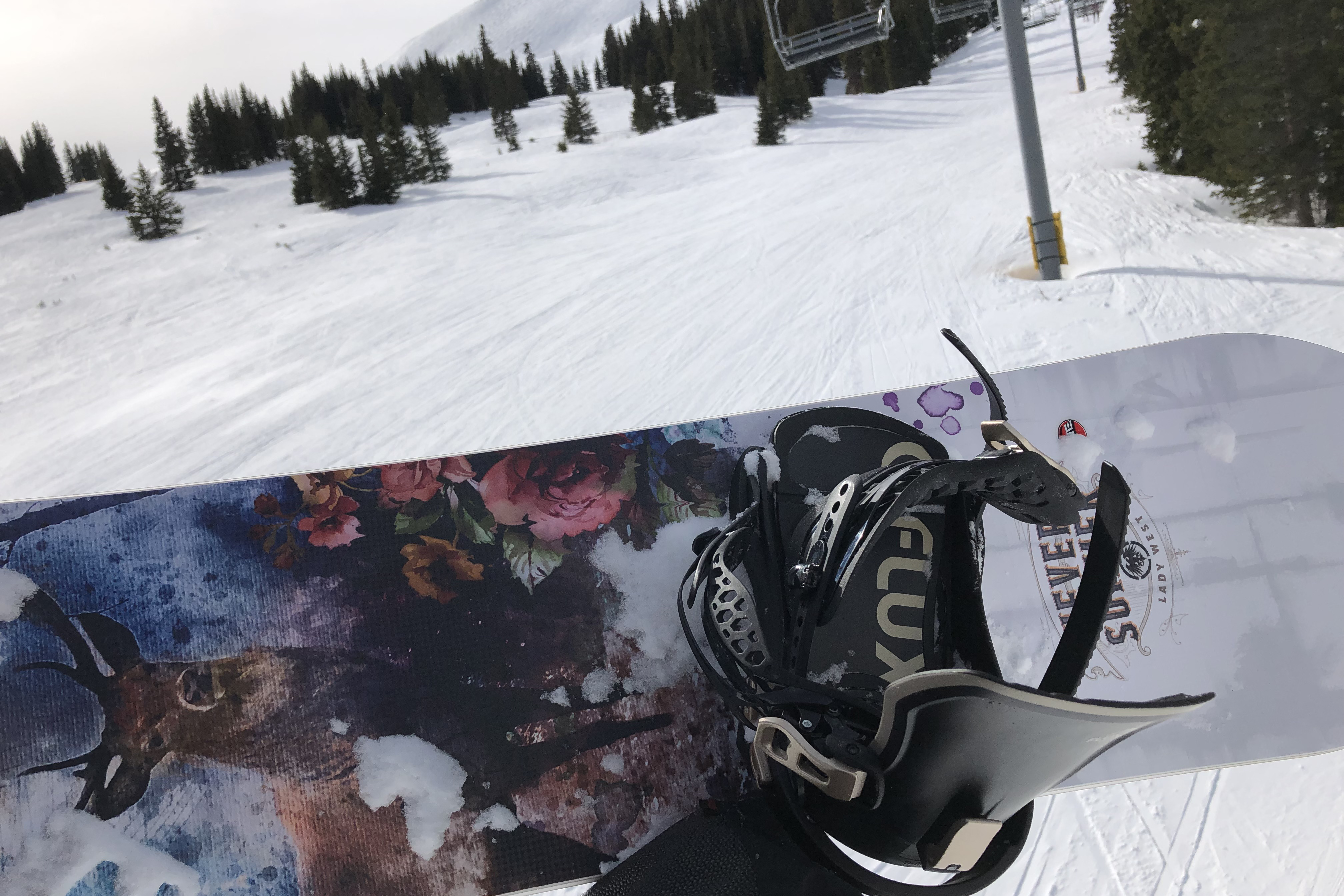 Initially, I thought this change-up might throw off my testing. But I was willing to try given the already aggressive nature of this board. The pleasure was instant. After a couple hesitant turns wondering if this powerful board would get away from me, I actually sat back and let it do the hard work.

And the Never Summer Lady West was fully capable. I took the board on groomed black and blue runs, including a few with ice patches that usually make me hesitant. The Lady West’s sidecut carved and gripped consistently, making me more confident. While stable, the board still allows for enough play at the tips and between the feet to allow for pops and ollies.

I also tried a few of my favorite tree runs at Copper, which were holding a little powder from previous days’ snowfall. Here, too, the Lady West’s torsional flex allowed for surprisingly tight turns in and out of trees without catching an edge. These were well-spaced trees, so I do wonder if the board could turn on a dime in tighter glades, especially on a steeper pitch.

Standout Benefit of the Lady West

The retro Western graphics are cool, too. But by far the standout feature of this board was how well it transitioned from edge to edge. If you snowboard, you know what I mean. If a board can make you forget you’re even tipping from toe to heel, or shifting your weight, it’s mint. And that’s what I’d raise up about the Lady West: transitions so thoughtless that the board almost felt electric. 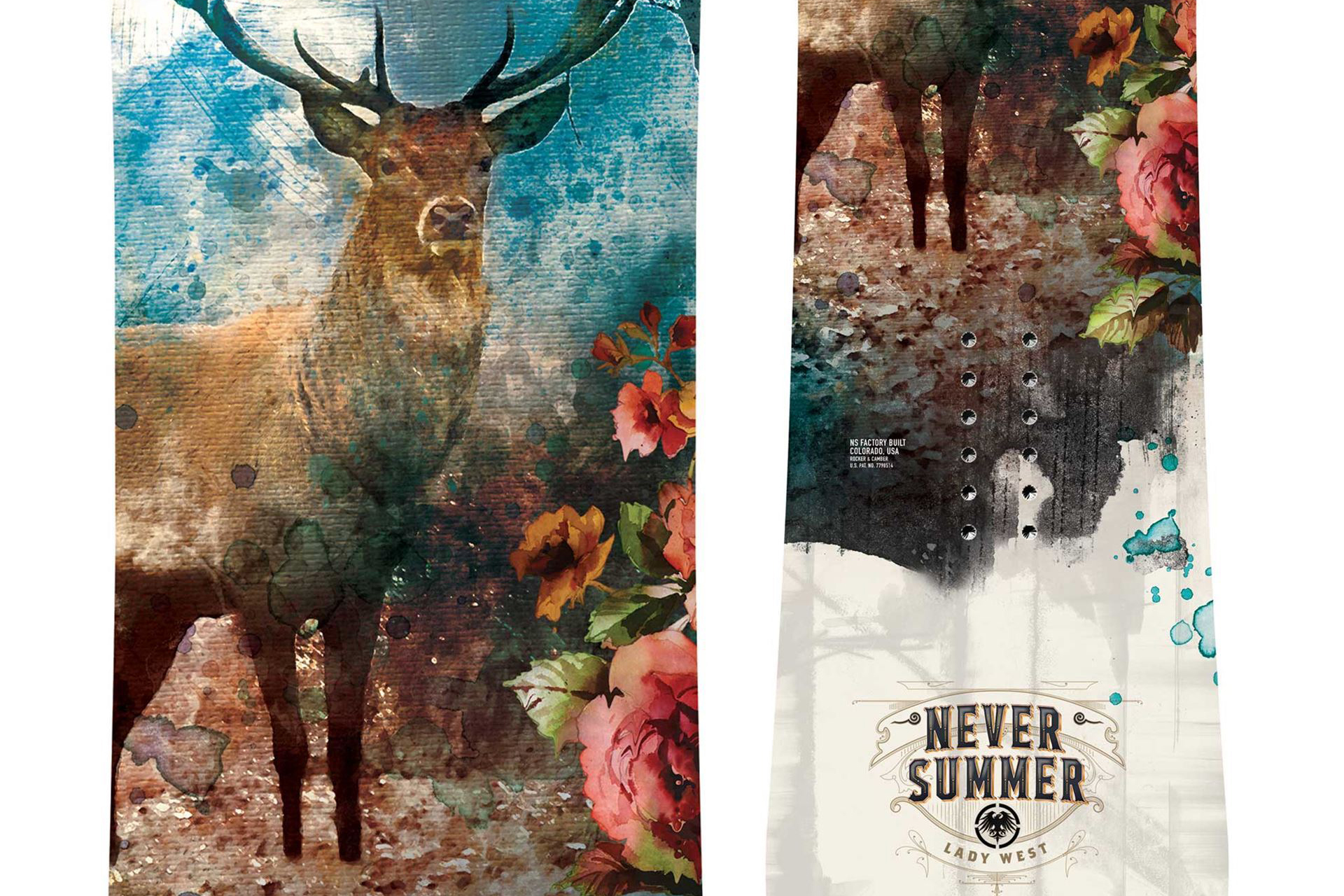 I’m an experienced rider with 20 years of resort turns under my belt. And while I’ve ebbed and flowed on snowboards, and at times felt like I’d plateaued, the Lady West gave me a sudden jolt of motivation. It made me feel like a better rider, and I wanted to rip even harder next time. For self-improvement purposes, I didn’t want to let this one go.

I only have a few complaints with the Lady West. First is its current limited size availability. Hurry up! Second, while I appreciated the midrange stiffness and snap of this camber-underfoot board, the Lady West might not be the best choice for those used to rocker boards.

The switch to a stiff, cambered board from one with a rocker profile can be a jarring one. The board can feel like it’s hard to maneuver and flex, but you just need to get used to it.

And third, quite frankly, is the messaging around this piece of work. “This board knows how to treat you like a Lady all over the mountain,” Never Summer’s website states. Nah, I’m good. Maybe we can be friends, though.

The Lady West is available right now (in size 149 cm only) on the Never Summer website and in select stores for $520. Come next season, you can get your hands on the board in seven lengths, ranging from 144 to 158 cm.

All Never Summer boards are made in the USA at the brand’s Denver manufacturing facility. If you’re in town, you can even stop by for a tour and order onsite.

Up Next: Arc’teryx Academy: Backcountry Classes From Pro Guides, Athletes