Low, slack, and stretched, this long-travel 29er performs so well climbing and descending that riders who love the downhill could make it a one-bike quiver.

Enter the Yeti Cycles SB150, launched today, starting at $5,199. With a 150mm travel shock and 170mm travel fork, it offers the best example of a long-travel 29er bike that climbs as well as an all-mountain bike — while descending confidently even in harsh terrain. And after my test, I think you’ll consider selling your downhill, enduro, and all-mountain bikes to own an SB150. 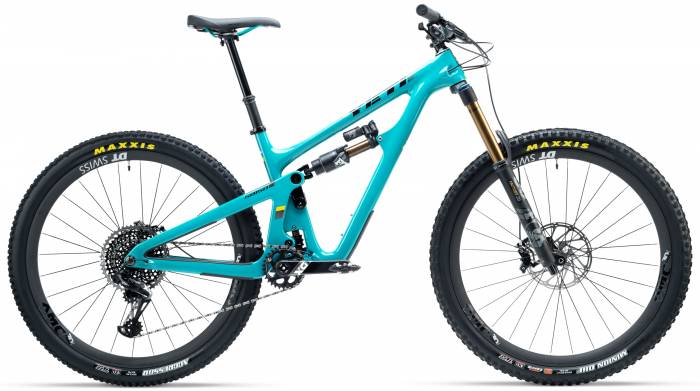 During development, Yeti took its popular SB5.5 and, according to Yeti director of engineering Peter Zawistowski, “Frankensteined” it to explore the progressive race geometry on offer. 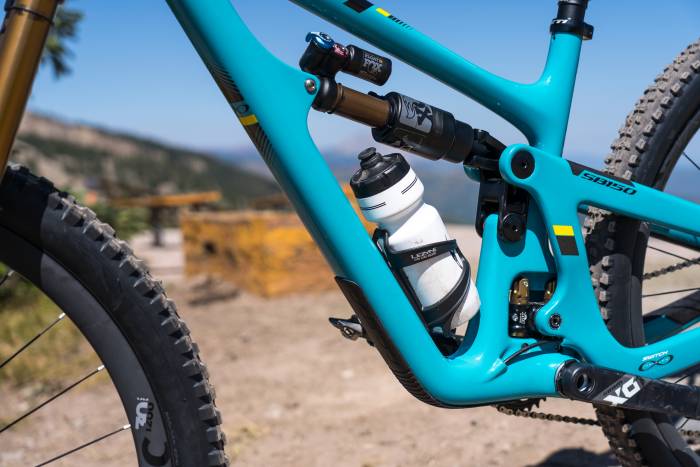 So Yeti opted for a 15 percent leverage curve based on feedback from riders. The result, Zawistowski said, provides better small-bump compliance as well as a “wider range of compatibility of shocks” and a “wider tuning window for rider weights and styles.”

“If you break shock travel into thirds —beginning, middle and end — with the new leverage curve, in the beginning of travel the bike is more sensitive to small bumps. In the middle of the travel, it’s well supported. And in the end of travel, the bike has even more bottom out resistance than previously. These new progression percentages give us a wider range of compatibility of shocks and a wider tuning window for rider weights and styles.”

In short, the Yeti Cycles team actually figured out how to make a mountain bike with better steering that’s more versatile and capable overall. And to do so, the brand filed 15 patents in the process.

“We’d get on a bike with a wheelbase 30mm longer and it would feel shorter,“ said Product Manager Ryan “Rocket” Thornberry. “On paper, everything about this bike looked wrong. But on the trail, it was like we made an impossible wish list and all of it came true.” 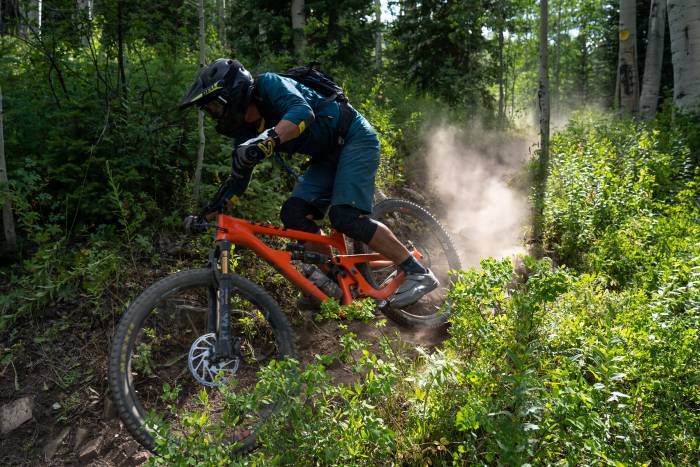 I rode the SB150 for a long weekend, hammering a wide variety of trails at Colorado’s Snowmass and Buttermilk ski resorts. That included a 1,800-foot climb up the front side of Snowmass on buff flow trails, transitioning to rocky, technical, and fall-off-your-bike-steep descents. Then I rode it for another week on backyard trails at my home in Vermont, where I typically ride bikes with far less suspension.

In short, I was stunned at the SB150’s adaptability and performance. The new geometry helped the bike steer exceptionally well. I smoothly rode features where other bikes gave me pause. I felt centered on the bike — a driver not a passenger.

Ordinarily, I would have never considered taking a bike this big on some of the trails I rode — especially the monster climb at Snowmass. But the SB150 crushed it all, making me rethink what and where I’ll pedal. At first glance, this bike appeared too much for everyday riding. I was wrong.

On multi-hour rides on technical singletrack, I soared over obstacles I previously considered sketchy. Without pause, the bike rolled over it playfully and sturdily. 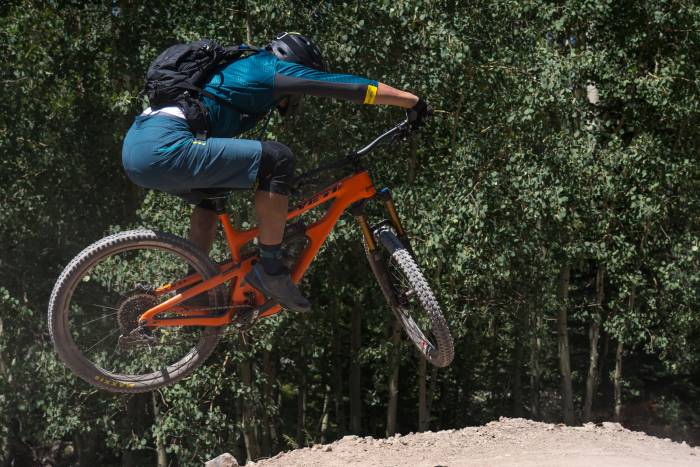 Plus, the bike climbed as well as any all-mountain bike. I knew the SB150 would crush any downhill I pointed it toward, so I was most surprised by its ascents. On uphill flow trail, it was a 100 percent adequate climber, not sluggish at all. And thanks to Yeti’s Switch Infinity additional linkage, there was no bobbing around as I slogged up alongside the lifts.

I didn’t bother to lock out the shock, yet the bike didn’t bounce around. Then, when I hit sections of technical uphill singletrack I wasn’t sure I’d be able to pedal, the bike cruised through with agility and confidence-inspiring handling.

On rooty, easy-coasting singletrack, the SB150 smoothed out the trail. It absorbed small bumps but never felt like a beast when I needed to make a quick correction to avoid an obstacle.

When pushed to perform, the bike handles with catlike agility while rolling over everything in its path. Like all Yetis, the SB150 is made for an aggressive rider who wants to push themselves and the bike. But its slow-speed handling is also spot on.

The kinematics of the SB150 are on point. So is the new shock tune. If it’s set up properly, you’ll use all this bike’s travel and get everything you want, including small-bump sensitivity and midstroke support. And you’ll maintain a poppy, lively feel as well as better bottom-out resistance. Yeti Cycles built this bike with great tunability for a wide range of riding styles and rider weights. 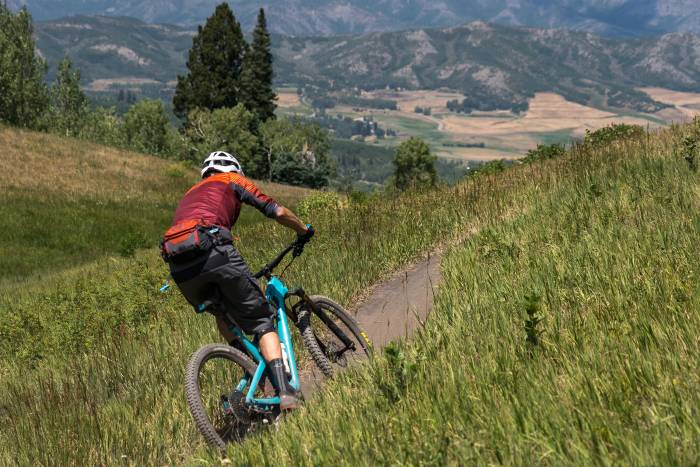 The new bike also makes maintenance and modifications easier. A 60mm shock extender allowed Yeti to get optimal shock placement and space for a water bottle in the main frame. The extender also allows the shock to be removed for servicing quickly and easily. The two-piece extender doesn’t clamp onto the shock — it has bearings. These minimize friction, so you’re not wearing through bushings as you ride. And the extender fits inside the shock link, keeping the bike frame narrow.

New Yetis, from the SB100 up, share hardware. So you won’t have to wonder if you grabbed the correct spare derailleur hanger for your next big trip. And the bikes are maintenance friendly for your mechanic. The shock is easily removable, and the bottom bracket port can be unscrewed, simplifying dropper post install.

The cockpit is user-friendly too. Much like Yeti’s SB100, the 150 has lower standover height, making it more accessible to smaller riders and more comfortable for everyone. By lowering the seat tube height, the SB150 is compatible with up to a 200mm dropper post, though it comes with Fox’s Transfer 150mm dropper. Yeti also made the switch to a 31.6mm seatpost diameter to compensate for consumers’ tendency to overtighten seat tube collars, which commonly interferes with correct dropper post operation.

Yeti 2019 model year bikes, including the SB150, now come with a lifetime warranty for the original owner. And they’re more durable than ever without being heavier. The SB150 is tested to downhill standards and has undergone substantial impact testing both in the lab and under the rider on the Enduro World Series circuit.

I was blown away by the SB150’s performance, both on its own and compared to other long-travel 29ers I’ve tested. Drawbacks I experienced with other brands, like pedal strike, weren’t an issue here.

But setting this bike up to get the best ride will take time, more so than on any other Yeti I’ve ridden. Tiny tweaks in sag and suspension make a noticeable difference. 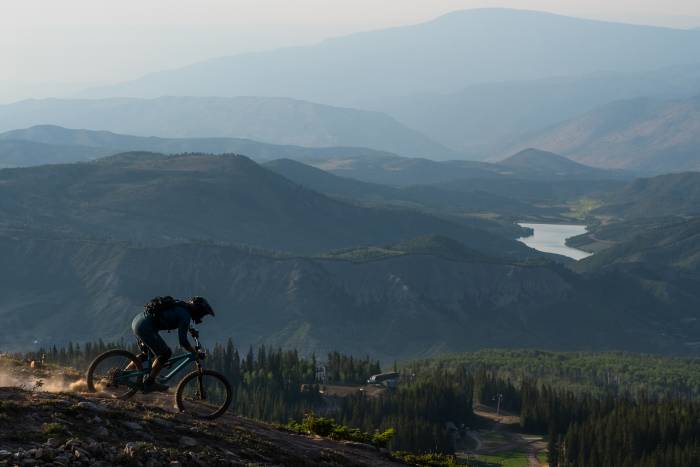 The SB150 is spec’d with a piggyback Fox Factory X2 shock and a Fox Factory 36 fork. But it’s Fox-approved for a coil if that’s your preference. Set up the bike according to recommendations on Yeti’s new website, launched today. Then, hone in on settings in a more scientific way: Ride it repeatedly on the same section of trail, making small tweaks each time.

Then, once you feel you’ve got it tuned to you, let it loose anywhere.

Up Next: Review: Mountain Bike Grips for Sore Hands