The cooler and tumbler behemoth is in court again, this time suing Home Depot and drinkware-manufacturer Takeya USA for trademark infringement.

According to the Statesman Journal, YETI is seeking an injunction to halt the sale of Takeya’s 20- and 30-oz. mugs, which the suit alleges are “confusingly similar” to YETI’s Rambler line.

According to the report, YETI also wants “a recall of products that have already been sold, destruction of all recalled products,” compensation for court fees, and “an award of defendants’ profits.”

When reached, YETI declined to comment for this story.

Beyond Home Depot, the Takeya line is sold at large retailers like Target and Best Buy. The insulated mugs retail for less, typically $25 vs. the YETI Rambler’s $30 price tag.

In the last two years, YETI has filed trademark claims against over a dozen companies. This month’s suit comes on the heels of dual lawsuits in March, both of which YETI won. One of the defendants, Axis Cups, went out of business following the lawsuit.

From travel mugs to burly coolers, competing brands have emulated YETI’s utilitarian aesthetic. And, much like Apple’s iPhone lawsuit against Samsung a few years ago, those rival companies have, according to court rulings, infringed on a patented design. 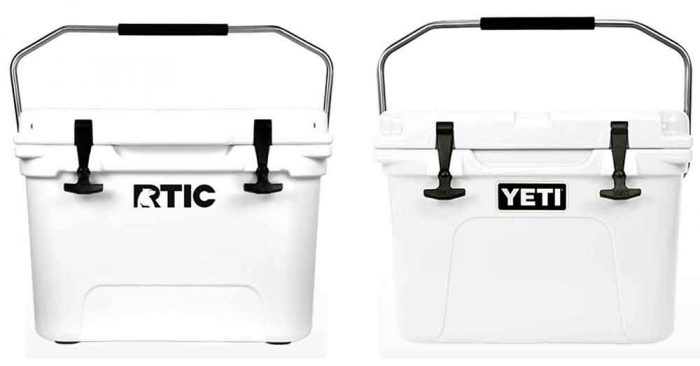 In perhaps the most noteworthy case to date, RTIC agreed to settle rather than pit its near-identical coolers against YETI’s in court. RTIC, also based in Texas, agreed to redesign its products and give compensatory payment to YETI.

Both cooler brands are based in Texas and have similar products. But after a battle in court, one side is backing down. Read more…

Founded in 2006, YETI grew substantially in just over a decade. Last year, the company filed for an IPO after a record $500 million in sales and more than $72 million in profits. That success has spurred dozens of legitimate and knock-off brands angling for a piece of the pie.

Many successful brands litigate almost continuously to protect designs and intellectual property. YETI’s actions aren’t unusual; they suggest a spreading trend in the industry to siphon off its identity.

In many product categories, the trend for years was “lighter, cheaper, and more compact.” More recently, a preference in some areas of higher quality, more substance, and more luxury has gained a hold, with YETI a poster child of the trend. According to YETI, in the shift some brands are cheating to piggyback and get ahead.

Up Next: Patagonia May Sue White House Over Nat’l Monument Review

Saving…
Patagonia May Sue White House Over Nat’l Monument Review
The Results Are In: Half Of Americans Don’t Play Outside
×