Rocky Mountain storms onto the trail with its updated Thunderbolt series, including the mid-priced Carbon 50. We got an exclusive pre-launch test ride to write this review. 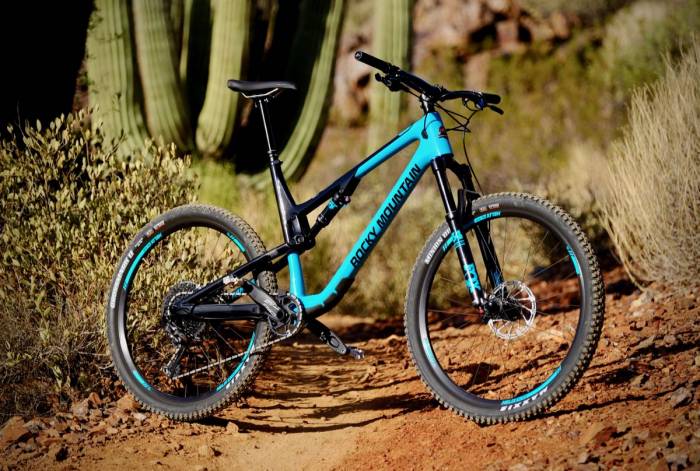 In the last 18 months, Rocky Mountain Bicycles has slowly revamped its entire lineup of bikes one by one.

Today it announced the release of the long-anticipated 2018 Thunderbolt Carbon series. With its 27.5-inch wheels and mid-range travel, it holds a key spot as an all-around trail bike.

The Thunderbolt Carbon 50 is new to most of the world, but I had the chance to put it to the trail well ahead of today’s launch.

In short: The Thunderbolt responds quickly to sharp corners and punches well above its weight class on the downhill. Plus, its lightweight build was a joy on long, steep climbs. Read on for our full bike breakdown. 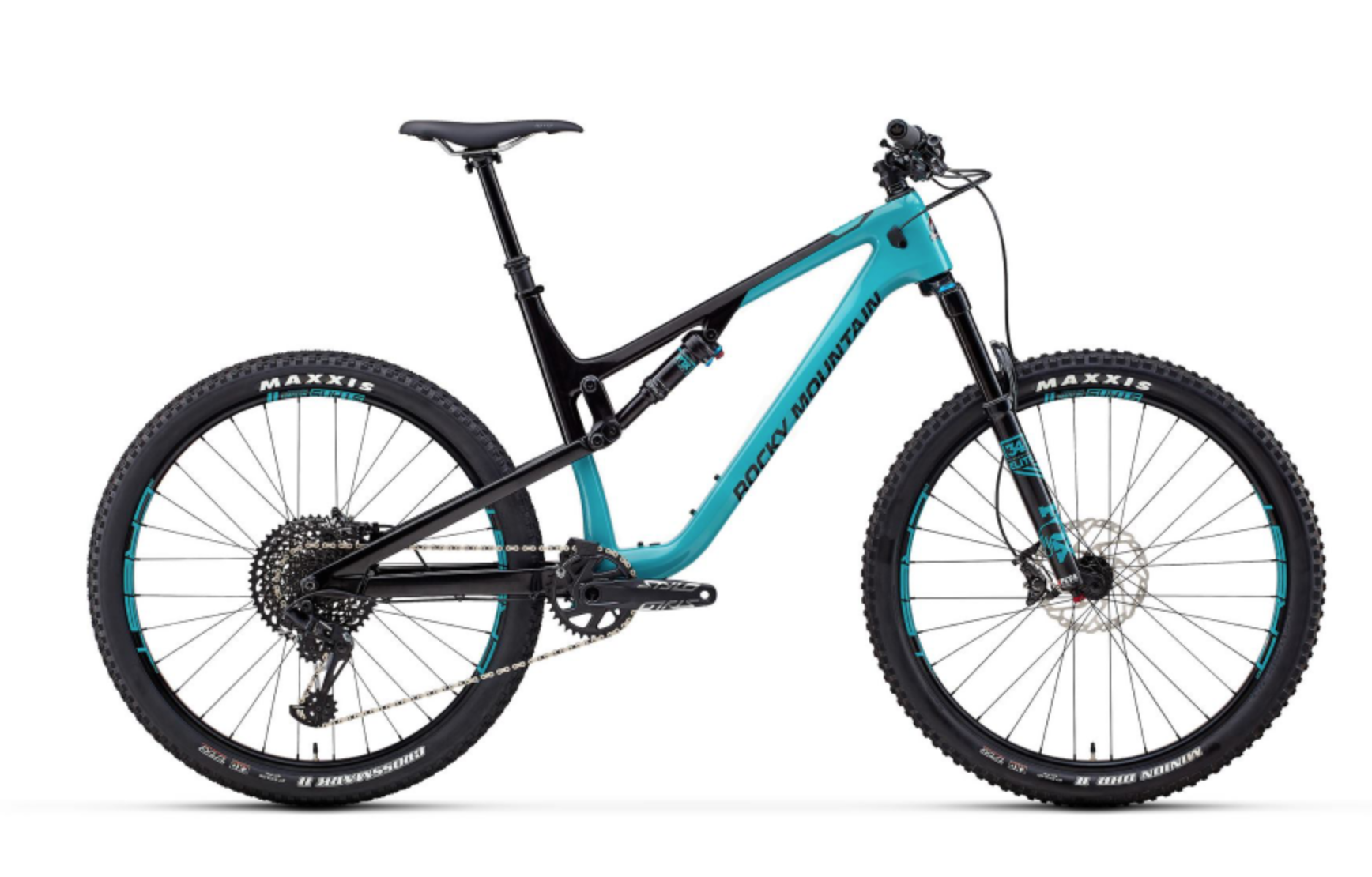 The standout feature of the Thunderbolt Carbon 50 is the frame. As anticipated, the revamped chassis is a blend of new and old.

The tubes are still molded with solid internal forms instead of the more conventional soft, inflatable bladders. Called Smoothwall carbon, it yields a light and strong tube with consistent wall thickness and no excess resin. 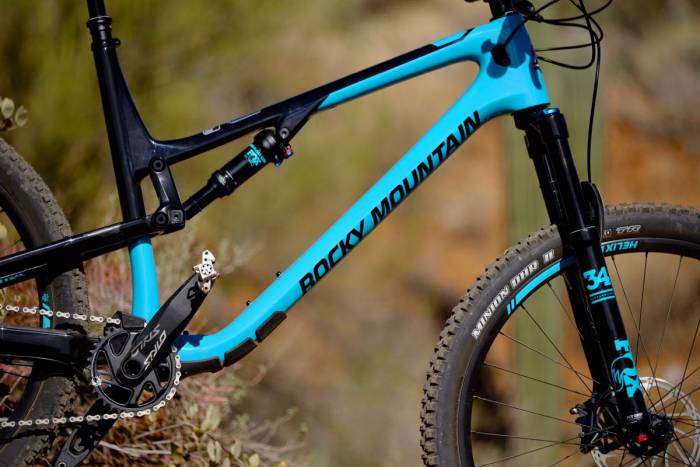 Although the new frame displays hints of its predecessor, the tubes are radically reshaped. The oversized down tube has angular chines at the bottom bracket joint to boost lateral stiffness. A one-piece Smoothwall seat stay assembly increases lateral rigidity at the tail of the bike for more efficient handling and power delivery. 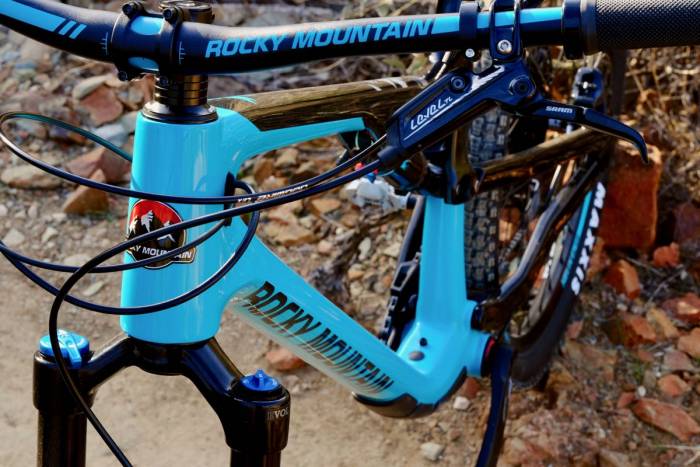 A welcome carryover feature from the previous Thunderbolt is Rocky’s adjustable geometry system. Ride-9 offers a wide range of selectable frame angles and bottom bracket heights via a nine-position adjustable shock mount. For 2018, the Ride-9 assembly sits at the lower end of the shock for easier access and a thinner profile. 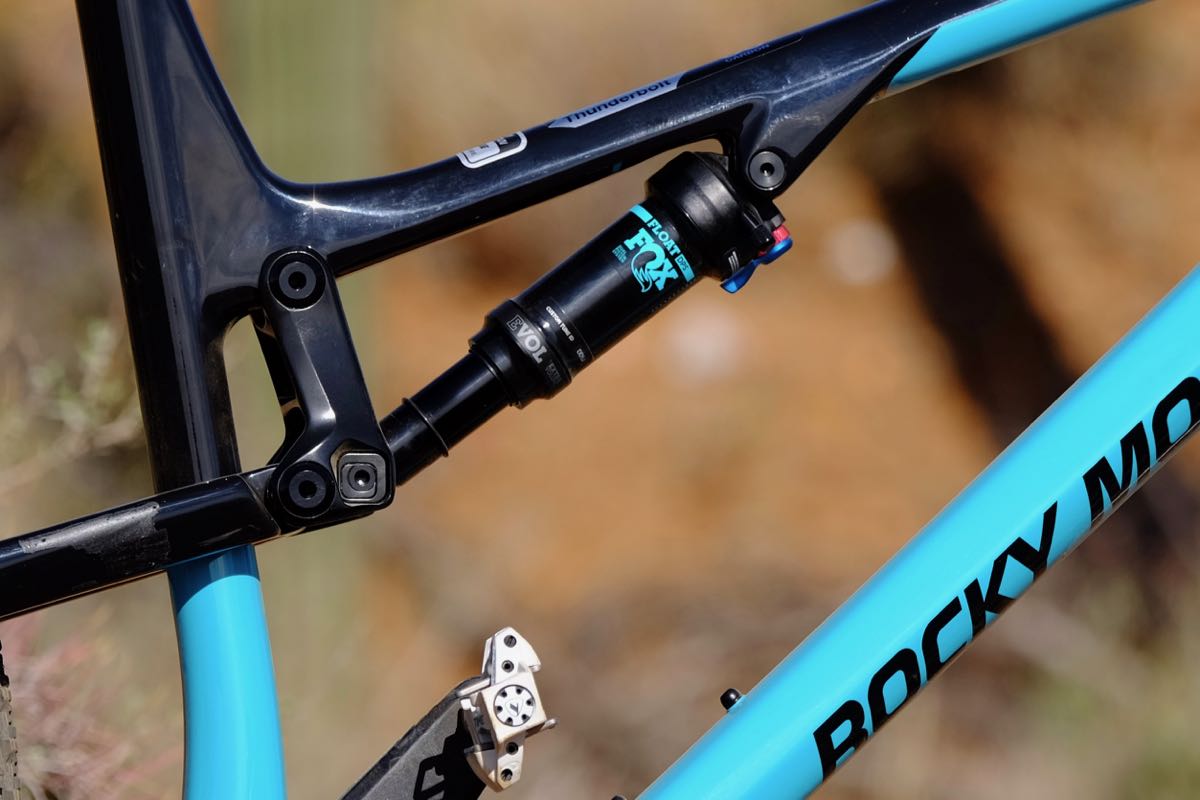 With the technical elements addressed, Rocky spent extra time with refinements and aesthetics. The improved cable routing system hides brake lines and shift cables in the down tube with accommodations for a Di2 battery and electric shift wires. 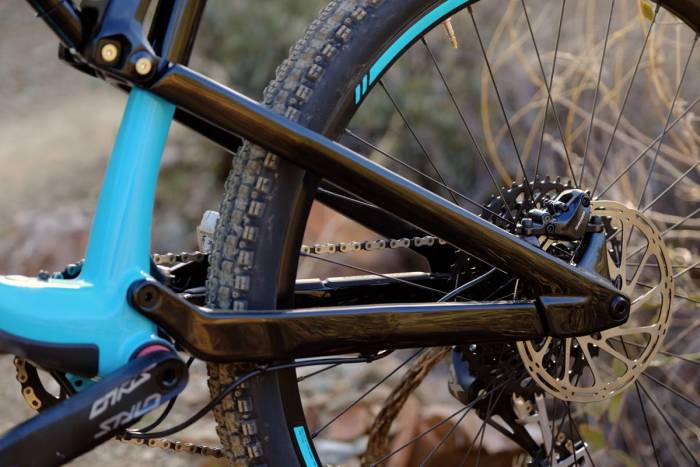 In keeping with current trends, the new frame is clad in rubber armor below the down tube and along the upper edge of the chainstay. Not to suggest the old Thunderbolt was ugly, but the new version is sharp.

Without upsetting its successful suspension recipe, Rocky redesigned its four-bar linkage to offer better anti-squat characteristics and a flatter curve rate throughout the range of motion.

The new setup sits higher in the shock stroke, making efficient use of the full 130 mm of travel. The system finally lives up to its Smoothlink moniker, with sealed bearing pivots in lieu of the previous bushings. That does wonders to help with small-bump compliance.

It’s getting more difficult to determine which category a given bike fits in, and that rings true with the Thunderbolt Carbon 50. The 130 mm of travel and semi-slack geometry place it squarely in the trail segment, but it rides with the swiftness of a cross-country bike. 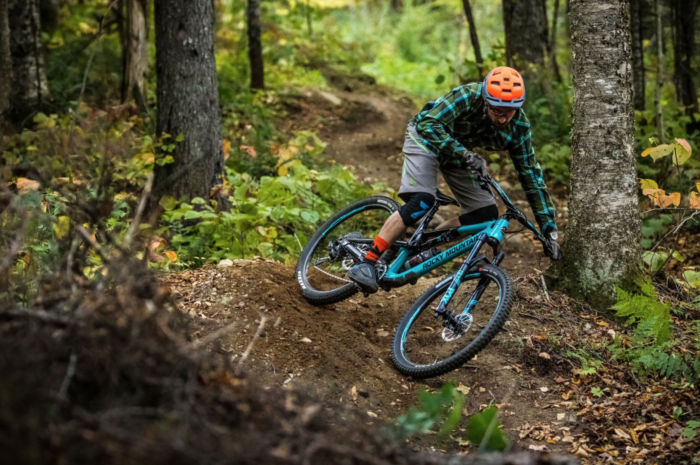 When pitted against steep climbs, it feels considerably lighter than its 27.3 pounds. Acceleration and short-burst power delivery is greatly improved with the new anti-squat kinematics. The response is instantaneous when I jam on the pedals, with no suspension bob or squat.

In keeping with recent trends for lower and more relaxed geometries, the 67-degree head tube angle fits with the new norm. Paired to a long top tube and short stem, the front wheel is snappy and easy to manage.

If I have one quibble, it’s with the drop of the bottom bracket. Although it keeps the center of gravity low for fast carving on buff trails, it makes pedal strike annoyingly frequent once in the chop. 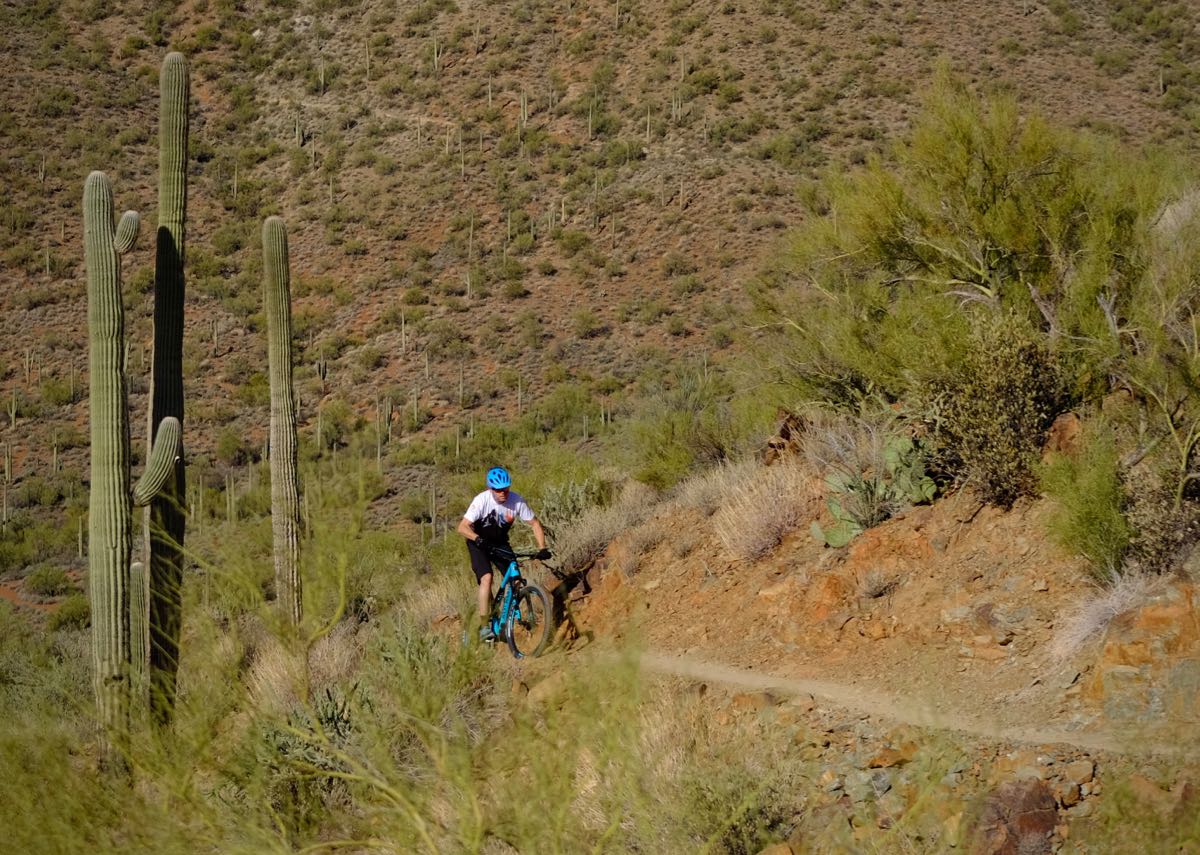 A quick adjustment of the Ride-9 system gave me a few extra millimeters of pedal clearance and added a pinch of steepness to the head tube angle. For me, that was a win-win.

Charging hard on the downhills, the Carbon 50 punches well above its weight given the modest travel. As is sometimes the case with a well-designed suspension, every millimeter of shock stroke comes to the aid of the rider.

Because the SRAM Level TL brakes have roughly 12% less power than the higher level Guide brakes, Rocky paired the calipers with 180-mm rotors. Overall power is more than sufficient, but the big discs make the system a little grabby.

With an MSRP of $4,499, the build kit represents a solid value. The Carbon 50 has a 130-mm Fox 34 Float Performance fork and Fox Float DPS EVOL shock unit to offer precise and tunable damping. I have always been impressed by the performance of the 1×12 SRAM GX Eagle drivetrain and value-priced SRAM Level TL brakes. 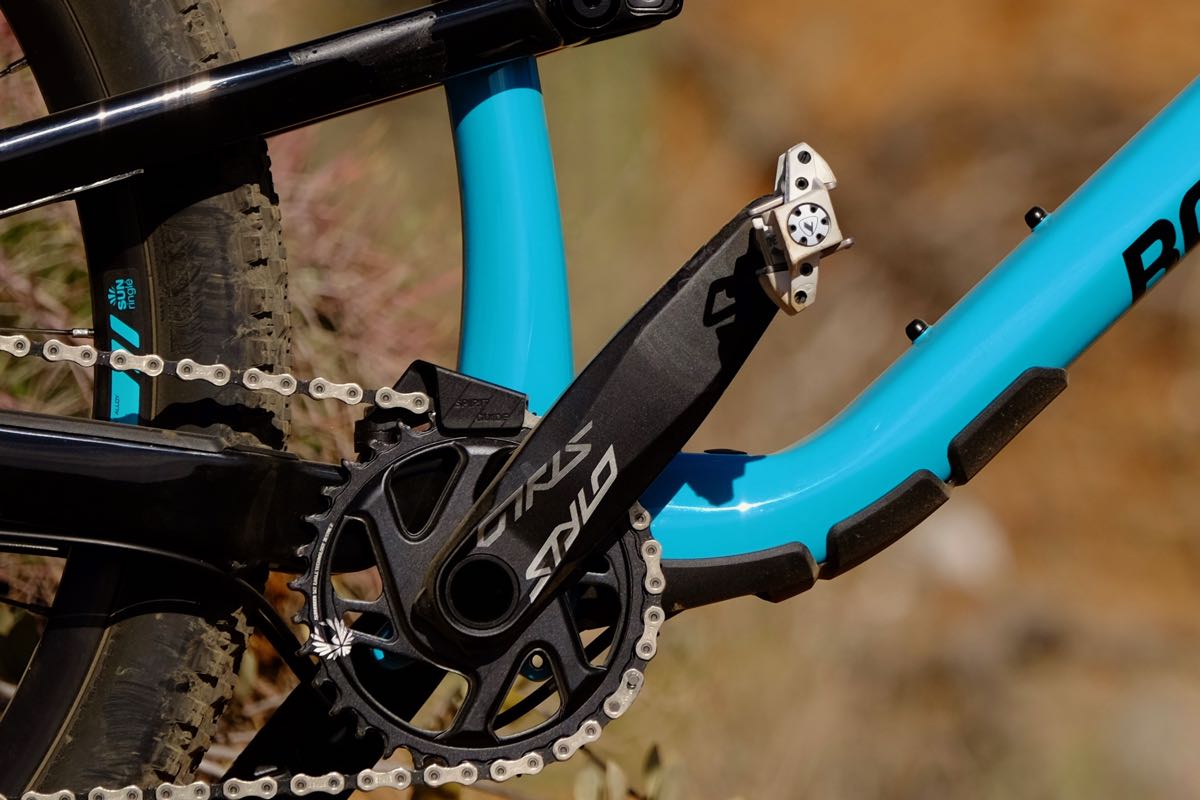 I do miss the adjustable reach of the upper-level SRAM brake systems, but that’s getting picky. You can’t have a trail bike in this category without a seat dropper, and the Carbon 50 ships with a Fox Transfer Performance post. 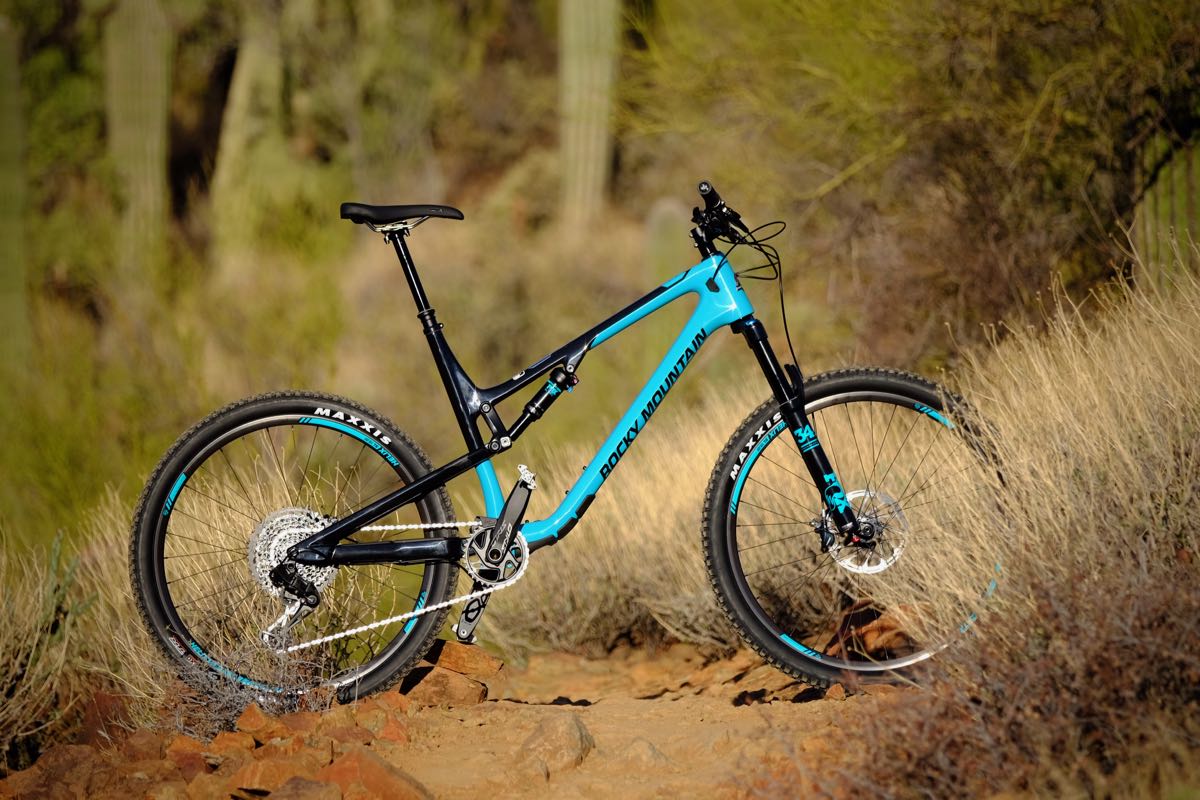 The wheels roll on a Boosted 148-mm DT 370 rear hub and a Rocky Mountain house-labeled front. The Maxxis Minion DHR II 2.3 front tire is a good fit for the Thunderbolt’s mission although I would have preferred something more toothy than the Crossmark II fitted to the rear. But that’s an easy swap.

Rocky Mountain Thunderbolt: The Wrap Up

One of my favorite bikes of the last few years is the Thunderbolt’s 29er counterpart, the 2018 Instinct. Nearly identical save for wheel size, I didn’t expect to like the 27.5-inch wheeled bike as much as I did. Surprisingly nimble and quick, the mid-priced Thunderbolt Carbon might have supplanted the Instinct as my new favorite in Rocky’s lineup.

For riders seeking trail bike fun without sacrificing cross-country efficiency, the Thunderbolt is a solid choice. Fitted with wider tires up to a 2.5 width, it takes on a more aggressive personality. Priced well and available in two colors, it’s a welcomed addition to Rocky’s 2018 lineup.

Up Next: Review: Rudy Project ‘Protera’ MTB Helmet Made for Dirt