‘Stay off the trails’ isn’t something most hikers are used to hearing, which is why it threw us off as we were sitting in Denali National Park’s Backcountry Information Center applying for a permit. 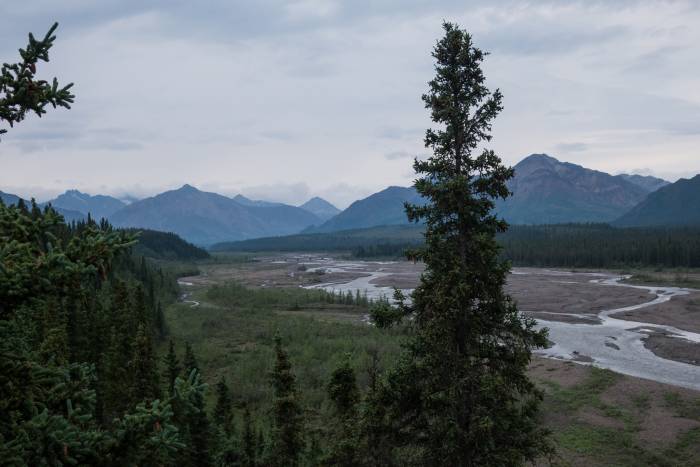 Hikers like us who are most familiar with the national parks and public lands of the Lower 48 have been trained to obey Leave No Trace ethics that usually suggest we stay on trails.

But in Denali National Park is a trail-less wilderness, and in addition to being asked to shy away from unofficial social trails herd paths, the Park Service has taken it one step further: They now ask visitors to refrain from sharing GPS routes and campsite coordinates online.

GPS Can Cause Trail Formation

According to the Park Service, precise GPS coordinates, turn-by-turn directions, and even guidebook recommendations of the best campsites and routes can all harm the undeveloped nature of the park, as well as contribute to an eroded sense of mystery and adventure for backcountry travelers.

“If someone says this is the greatest campsite ever and then everyone camps there on a published route, we’re going to see impacts,” backcountry ranger Michael Raffaeli told the Fairbanks News-Miner.

In Denali, the focus is as much on preserving exploration and the true wilderness experience for visitors as it is protecting the environment and limiting human impact. “We want them to be able to explore this landscape using their own decision making process,” said Rob Burrows, a wilderness resource specialist with Denali National Park who has studied this issue.

According to Burrows, the Park Service has received a positive response from some of the larger institutions of backcountry-beta-sharing. Backpacker Magazine, which in its guidebook-style articles regularly puts an emphasis on giving readers “the best” camping spots as well as GPS tracks of routes, has welcomed the opportunity to craft its publication to the best interest of the park and its visitors.

“We will work with them to give readers the most appropriate information through trips that conform with the park’s policies,” Editor-in-Chief Dennis Lewon said, adding that because Backpacker staff only very recently learned of Denali’s requests, they plan to reassess and potentially edit articles that have already run, as well as adapt future coverage of Denali.

“I’ve hiked in Denali. I know how special the backcountry is, and the fact that there are no trails is really a key part of that experience,” Lewon said, noting that he’s not aware of any other park that has the same policy as Denali.

Although nearly 109 million acres — about 5 percent of the entire U.S. — is protected as federally-designated wilderness, the Wilderness Act of 1964 is largely not interpreted as banning trails, let alone GPS coordinate and route sharing. Wilderness areas across the country ask visitors to stay on trails, rather than impact the environment outside of them.

“Let the tourist be on his own, and not be spoon-fed at intervals. Let him be encouraged to keep his eyes open, do his own looking and exploring, and catch what he can of the magic of wilderness,” he wrote in opposition to a 1950s plan to expand the park’s trails.

No Routes In Denali

The park’s 2006 Backcountry Management Plan echoes Murie and decades of custom by stating “Except as otherwise specified… backcountry access and travel in Denali will continue without designated routes or constructed trails to allow for freedom to explore and to minimize signs of human presence.”

Similar trail-less wilderness areas exist within Alaska, which contains more than half of all the country’s wildernesses, but Denali is by far the most popular, totaling more than 38,000 backcountry campers last year. According to Burrows, the relative ease at which visitors can access Denali’s backcountry (it’s split in two by the park road) has spurred increased exploration and cause for increased measures to keep the wilderness as Murie intended.

Very quickly after starting hiking from the park road, we ran across our faint trails, and like many of Denali’s visitors we opted to take the path less traveled, spread out to disperse our impact and take advantage of a wilderness experience unlike anyplace else.