When the founder of GearJunkie takes his family on a meandering midcontinent summer road trip, the stakes for adventure are high… if he can survive the screaming kids in the backseat. 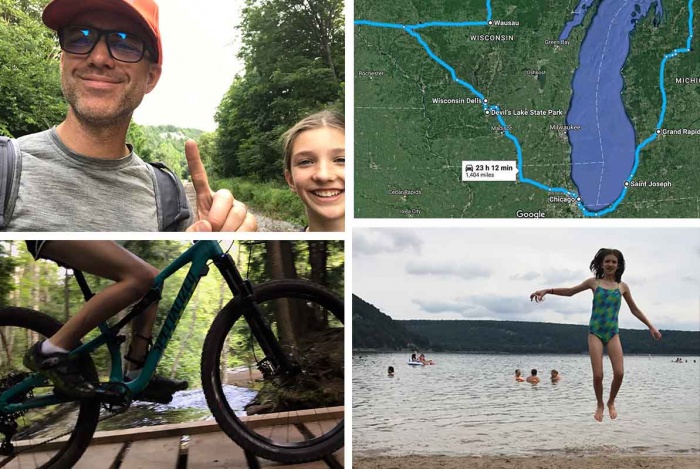 I bought a longboard in Wausau, Wis. It was noon on a Sunday, the first day of a family road trip. I’d wanted a particular ride — big wheels, large deck — so on a whim I nabbed a Landyachtz reminiscent of the board I’d learned to skate on as a kid.

Rolling down an empty street toward Wausau’s whitewater kayak park, my kids chased me and then ran ahead. Our big family adventure had begun.

Over the coming 12 days we’d mountain bike, rock climb, swim, run, SUP, zipline, and splash around a waterpark. Our route traced east from Minneapolis (our home), to Michigan’s Upper Peninsula, and then south into the “mitten” of the state.

Next was some urban adventure in Chicago, a much-pleaded stopover in Wisconsin Dells at the kid paradise Wilderness Resort, and (finally) a long drive northwest back homebound again.

Could my wife and I survive four kids and a minivan packed with gear? Here are some highlights and some strangeness we found along the way.

Do you want a core, up-and-coming adventure-ready town? The mid-size municipality of Marquette punches high above its class. Flat out, the place and the people we met there rock.

A former mining and industry town in the forested reaches of Michigan’s Upper Peninsula, I visited Marquette years ago. That time it was to ice climb dramatic frozen curtains growing on Lake Superior’s shore.

But summer here was surprising bliss. Superior is a clean, clear, swimmable plane of turquoise, stretching to eternity from Marquette’s beaches and shores.

My kids jumped right in, and one morning I hit a SUP session with an old climbing acquaintance, Bill Thompson of Down Wind Sports. We later top-roped a 5.10 pillar arching over the lake.

Mountain biking in Marquette is no joke — the Noquemanon Trail Network is a wonderland of singletrack, beginner to advanced, that twists from the city into the deep, forested hills.

I pedaled with a friend, Candy Fletcher, for an afternoon and got an introductory tour of the Noquemanon’s XC network. It was complete with shady stretches under dense canopy, exposed stone, tacky dirt, and smart trail design.

We departed Marquette, sad to leave. But the road called, and so we drove east toward Lake Huron and the Lower Peninsula beyond.

The ferry to Mackinac Island spouted a massive jet of water off its backside, a visible thrust of Huron’s cool waters. Mackinac island is a veritable time-capsule in the lake; cars are mostly not allowed on the island. Bikes and horses prevail on the four-square-mile preserve.

No doubt Mackinac is a tourist trap. Fudge shops and fancy hotels prevail along its main street. But we got off the crowded drag and headed into the hills, stopping first at Mackinac State Park’s fort, then pulling on running shoes to explore the island’s trails.

I ran to Skull Cave with my daughter, a shallow cavern marked by a sign. Then it was into the woods, a trail run for a couple miles before descending back to the tourist routine.

Southbound we drove, heading toward the state’s namesake big lake. It was noon on Thursday when we first sited the ocean-like waters.

Lake Michigan is blue and pure. Its waves roll and crash, and shore currents pulled my crew adjacent to the sand. We snapped lifejackets on the youngsters then let them play; waves crashed over Levi’s head, a 4-year-old facing the biggest water he’d seen.

White sand and towering dunes define the shore near Traverse City and south toward the coastal towns of Ludington, Saugatuck, and St. Joseph.

We spent three days exploring the area, staying in a cottage at a woodsy ranch near Grand Rapids. Dune climbs and sand castles were the order, and I swam out past the break to peer at the immensity of the great lake.

Michigan — the state and the lake — had won our respect and vows to return. Each night, sand coated the inside of the minivan, and the kids would collapse into sleep.

Before departing the land of water and sand my crew stopped in Grand Rapids for an afternoon. A contact at Wolverine Worldwide, parent of Chaco, Merrell, Saucony, and other brands, had invited us for a quick tour and lunch.

We stopped in first at the modern, urban offices of Chaco in downtown Grand Rapids for an inside look at the operation.

The company showed off its soon-to-release Pac-Man sandals. We spied color swaths and a designer’s screen strewn with webbing straps of varying designs. “These are 2019,” she noted.

After lunch we trekked the streets of Grand Rapids and found a riverside park where the kids put new sandals to the test.

Toll roads led south toward the Windy City. Uber and public transport took the place of our minivan for the next two days. Beyond “hiking” the downtown core (and visiting The North Face flagship store) our time in Chicago was decidedly un-outdoorsy.

But the animals at Lincoln Park Zoo, the immersive exhibits at the Field Museum, a stop to nab eclipse glasses at the planetarium, a trippy family photo at Cloud Gate (aka “The Bean”), and a dozen more random activities made Chicago a memorable two days.

A final segment of our trip was calling. It was day 10 on the road, only the bulk of Wisconsin separating my troupe from home.

Devil’s Lake State Park is an Ice Age-created anomaly. Its deep namesake lake is rung with cliffs, a premier crag of the Midwest.

We threw a rope off an 80-foot route one afternoon. The area is infamous for its strange stone, a hard and slick quartzite that some love and some hate. I’m in the former camp, though the rock does take getting used to if you’re spoiled on granite and its faithful grip.

I lowered my daughter on a 5.5 chimney. “Head up the face if you can,” I shouted. She squinted at the smooth rock and splayed a leg back to the ledge, reaching high and moving up.

We climbed for a couple hours while the smaller ones splashed hundreds of feet below at a beach. It was late afternoon when I coiled the rope and slammed the roof-box on our van. Wisconsin Dells, the final stop on our trip, was just a few miles away.

A classic tourist mecca, Wisconsin Dells is touted the “waterpark capital of the world.” It’s like Las Vegas for kids, with water-piped slides, ziplines, roller-coasters, go-karts, arcades, and more.

We’d dangled the Wisconsin Dells carrot the whole trip as a reward for behavior in the van. It worked, and so on a Wednesday morning we found ourselves immersed in the la-la land that is Wilderness Resort.

Wilderness Resort has multiple water parks, indoor and out. On the 600-acre property, you get mini golf and go-karts as promised, and a dozen additional activities in case speed and plunge-slides are not enough.

Basically, the place is kid bliss. We hit it hard for 10-plus hours that first day. A new “Cyvrspace” game let us “battle hordes of sinister robots in an epic VR adventure.” (It was beyond trippy, with headsets and haptic backpacks included!)

A “laser maze” shot green beams of light into a dark room, giving a crawl-and-squirm challenge. A zipline course stretched above a canyon in the resort, with smooth “flying” on the cables up by the trees.

Oh, and waterslides. From lazy rivers to dramatic plunges, Wilderness Resort did not disappoint.

Waterlogged and overstimulated, we packed up. It’d been a long trip, diverse and strange, at times sublime. We’d miss the serendipity of the road, our aimless days searching for waves and climbing dunes.

Marquette and its mtb scene was on my mind, and I was already concocting plans for a climbing trip to return. The mid-continent may not have real mountains, but have you seen the ice draped over Lake Superior when winter snaps on the U.P.?

Our region is home to woods, lakes, rivers, and natural landscapes unlike anywhere. And the tourist traps are many as well. But you need to embrace them and let the kids smile. Give them a push down the waterslide. Then jump in after, tuck up your legs, and enjoy the wild ride.

Up Next: Outdoor Hazards: Viewing The Total Eclipse